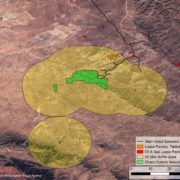 This is another of those oblique victory stories about something that did not happen. If you’ve been following our work over the last year, you may have noticed that we’ve done some work monitoring the sale of oil and gas leases on public land in the vicinity of Chaco Culture National Historical Park in northwestern New Mexico. Most recently, we posted about a lease sale that was scheduled for March 8, 2018. Some of the proposed lease parcels included in this sale fell extremely close to the boundary of a 10 mile buffer zone around the park that had previously been established in agreement with local Native American tribes to protect the viewshed, soundscape, and visitor experience to the park, as well as the numerous Ancestral Pueblo ruins and artifacts found throughout this historically significant region. Oil and gas drilling in these parcels had the potential to impact the UNESCO World Heritage status of the park. This map shows the 8 leases (in red) which were scheduled for auction on March 8, 2018. Lease parcels which were previously tabled for further review (in orange). The boundaries of Chaco Culture National Historical Park are displayed in green.

On March 2, U.S. Secretary of the Interior Ryan Zinke announced that the lease sale scheduled for March 8 would be deferred, to give the agency time to “complete an ongoing analysis of more than 5,000 cultural sites in the proposed leasing area.” Zinke cited questions about the sale that had been raised by public stakeholders, stating “We’re going to defer those leases until we do some cultural consultation.” It is important to note that these leases could come up for sale again in the future, but in the meantime, it is a comfort to enjoy this sale that did not happen. The deferral of oil and gas leases near Chaco Culture National Historical Park is an important reminder that public comment and protest have a very real power to help protect our public lands.