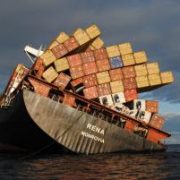 Good news from the salvors who have been working to pump all of the remaining oil off of the Rena, the 47,000-ton vessel that ran aground on the Astrolabe Reef off the Bay of Plenty coast on October 5, spilling about 110,000 gallons (350 tonnes) of fuel oil and a bunch of its containers into the sea. According to TVNZ’s website, almost 2/3 of the remaining oil has been pumped out of the last tank on the ship. Officials report that less than 63,000 gallons (200 tonnes) of oil are still in that last tank and the best news for those working to pump out the oil is that the weather is expected to remain clear for the remainder of this process.

Even MORE good news, they plan to begin the process of getting all of the containers moved off the ship as early as next week (again, weather permitting). Currently there are 466 containers on the ship’s deck and another 814 secured below deck. Some of these containers hold toxic materials, so we hope they get them offloaded safely.

Rena‘s running aground on the Astrolabe Reef is considered to be New Zealand’s worst environmental maritime disaster. According to NZHerald.com, up to 20,000 birds were killed in the disaster.