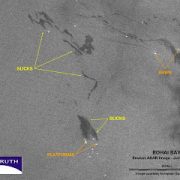 The Chinese government and fishermen are really hammering ConocoPhillips over their recent and apparently still unresolved pair of oil spills from two platforms at the Penglai 19-3 offshore field in Bohai Bay.  We observed small oil slicks there on a radar image taken on June 11. Reports of continued leakage from one of the platforms, where they were injecting drilling fluids beneath the seafloor for disposal, suggest they may have cranked up the pressure too high and ruptured the well casing.  Good thing that’s not a high-pressure production well or we could be looking at a major multi-month spill.

Here’s a new version of the June 11 image, with a scale bar and some helpful annotation pointing out what we infer to be the Penglai 19-3 oil field based on maps and descriptions of the location that we’ve read (does anyone have actual lat/lon coordinates? call us!).  We’ve also marked slicks and a couple of vessels with distinctive wakes (there are more – pick ’em out!):

We’re not making any excuses for the problems caused by ConocoPhillips, but we’ve been looking at radar satellite images of the Bay and it seems pretty clear that there is routine oil pollution throughout the Bay that is not attributable to the Penglai field operation.  Penglai 19-3 lies just south of a major east-west shipping lane where we see slicks, probably from vessels, on a couple of images.  Here’s an example, showing an obvious slick from a vessel that stretches for nearly 40 miles:

So ConocoPhillips may be fouling the Bay, but it appears they’re not the only ones. 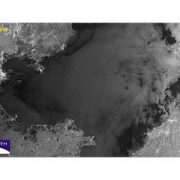 We just got a satellite radar image of Bohai Bay taken June 11, 2011.  It shows what appear to be oil slicks emanating from two platforms in the vicinity of the Penglai 19-3 offshore oil field operated by ConocoPhillips.  This fits the story so far, that apparently unrelated spills with different causes occurred at two of the new platforms there. Radar is a powerful tool for detecting oil pollution at sea; it’s very sensitive to the “roughness” of the ocean surface. But not every slick – a flat patch of water – is an oil slick. Some slicks are showing calm water caused by slack offshore wind, heavy rain, thin ice, or natural surfactants from algae, phytoplankton, even large schools of fish.

So radar image interpretation benefits from long experience.  Our experience leads us to be confident in the analysis provided below. We’ll keep checking to see if there are ongoing problems in this field.