You are here: Home1 / SkyTruthing for Students2 / Shifting Sands on Petit Bois Island 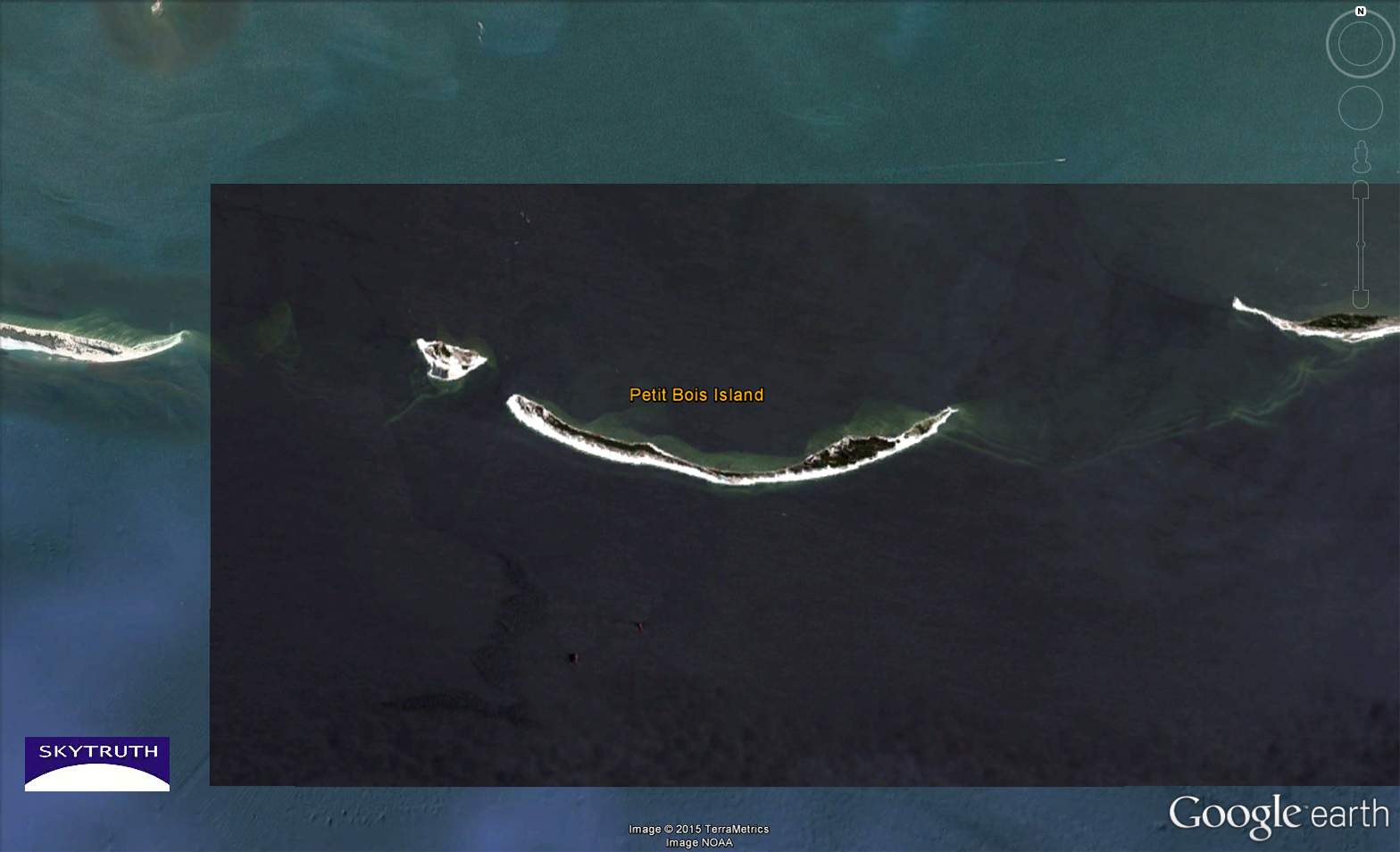 Barrier islands have always changed shape and size through natural processes. But human activities have altered these processes.  Now, barrier islands like Petit Bois are shrinking. How fast is the island shrinking? What will happen if Petit Bois disappears? What solutions might slow or stop that process?

In this activity you will examine maps and satellite imagery to observe and document changes in Petit Bois island, and research options for addressing these changes.

For more than 160 miles, the barrier islands of the Gulf Islands National Seashore shelter the Gulf Coast shoreline.   Starting with Santa Rosa Island near Pensacola, Florida, and running west through Mississippi, ten narrow islands of shifting sand, dunes, and seagrass absorb the brunt of hurricanes, while nurturing sea turtles, shorebirds and juvenile fish. National Seashores are coastal areas managed by the National Park Service to protect natural habitat for the use and enjoyment of people.  Two of the islands in Mississippi – Petit Bois and Horn Island — are so wild, that Congress also designated them as wilderness in 1978. Federal law defines wilderness as

“an area where man is a visitor… who does not remain.”

Wilderness areas are places where nature is supposed to take its course, and people enjoy these places in their wild state.   But even in wilderness, human activities outside the area can unintentionally alter that course.

To geologists, the barrier islands of Gulf Islands National Seashore and Dauphin Island (which divides the Florida islands from the Mississippi Islands) are young – only a few thousand years old.  They formed after glaciers retreated from most of North America, sea levels changed, and shoals appeared along the Gulf Coast. Once formed, the shoals helped trap sand and sediment brought in by currents, creating islands. Even today, currents pick up sand in the east and carry it westward where some of it drops out of the waves on the western edge of each island. As this continues over time, the islands change shape. Many migrate west and towards the mainland, as the eastern and seaward ends of the islands erode and the western ends grow from deposited sand. Storms such as hurricanes can also change the size and shape of the islands by cutting through narrow or low-lying areas and accelerating erosion.

In fact, French explorers in the 18th century found that Petit Bois Island was connected to Alabama’s Dauphin Island to its east back then. A French mapmaker named Jean Baptiste Bourguignon d’Anville showed this connection in his 1732 map of Louisiana.

But by 1816, other maps show that Petit Bois had become its own island, probably because of hurricanes and other storms breaching the sand that connected it to Dauphin.

Since then, the barrier islands have continued to change shape. Information compiled by scientists at the U.S. Geological Survey from maps, aerial photographs, GPS, and lidar technology, reveals how Petit Bois has changed from 1848 through 2005 as sand continually erodes from its eastern end.   Look at the layered map below and examine where Petit Bois has lost land. Has it gained any? 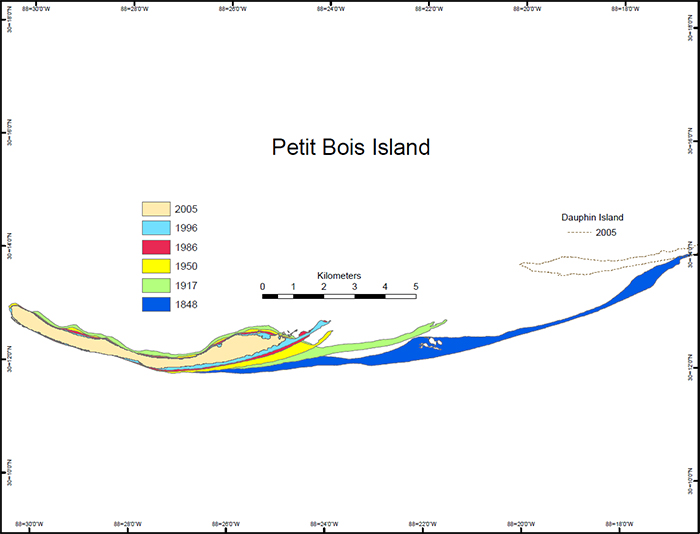 Morphological changes in Petit Bois Island between 1848 and 2005. Robert A. Morton, “Historical Changes in the Mississippi-Alabama Barrier Islands and the Roles of Extreme Storms, Sea Level, and Human Activities“, USGS, 2007, p. 7.

As the Gulf currents continue to run from east to west, they erode the eastern end of Petit Bois Island. In the past, sand carried by currents would deposit on the western end of the island, allowing it to replenish at least some of its losses. Today, that part of the natural process is halted. Ships access the Port of Pascagoula just west of Petit Bois Island through a channel called Horn Island Pass. In order to keep that navigation channel open, the U.S. Army Corps of Engineers dredges sand out of the channel, making it deeper than it would occur naturally, and deposits the sand in other parts of the Gulf. By removing new sand that deposits in the navigation channel west of Petit Bois, sand lost from the eastern end can’t be replenished. Over time, Petit Bois Island has been shrinking.

Army Corps of Engineers recently created a sediment budget to study how much sand is lost to the barrier islands each year. 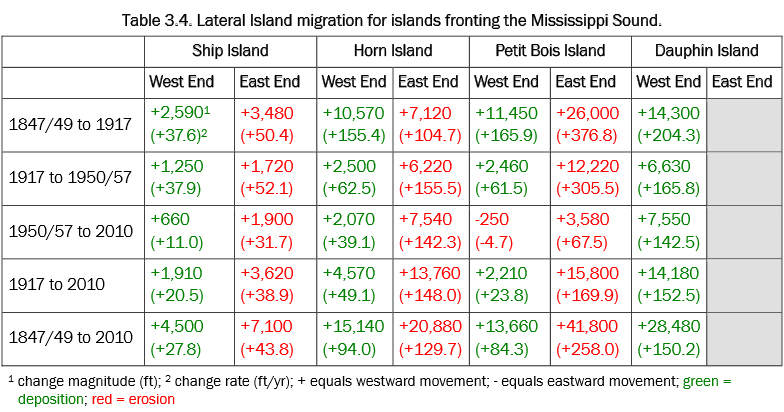 Just as with a bank account, too many withdrawals (such as through dredging) and not enough deposits (through natural replenishment in currents) will eventually deplete the island “account.”

Strong storms such as hurricanes often change the shape of barrier islands by creating powerful waves with tremendous energy hitting island shores. This increased wave energy can accelerate erosion, making the islands narrower. Large waves can completely overwash islands, particularly in low-lying and narrow sections, breaking a single island into two (as they did with Petit Bois and Dauphin Island in the 18th century). By absorbing this increased wave energy, barrier islands protect mainland coastal areas from the full force of hurricane waves. For example……But in the process, they take a beating themselves.

Scientists predict that as global temperatures rise, storms such as hurricanes will increase in severity. Already, according to the U.S. Geological Survey, the large number of storms affecting the Mississippi coast since 1995 has accelerated land loss on the barrier islands.   This includes Hurricanes Danny (1997), Georges (1998), Ivan (2004), and Katrina (2005).

Rising carbon dioxide and global temperatures are causing sea levels around the world to rise. This occurs for three reasons: (1) as water warms, it expands in volume (2) as global temperatures rise, ice sheets in the Arctic melt, releasing water into the ocean and (3) ice sheets in the Antarctic disconnect from the land and, like ice cubes in a glass of water, raise ocean levels when they enter the water.

If sea levels change slowly over time, barrier islands might simply move landward, as water washes over the island eroding its ocean side and depositing sediment on the sound side of the island. Rapid sea level rise, however, could inundate barrier islands and coastal areas, leaving them completely covered.

Petit Bois is an officially designated wilderness area. The National Park Service manages Petit Bois as part of the Gulf Islands National Seashore to retain its “primeval” character – a term identified in the Wilderness Act – and permits no permanent human structures and no motorized vehicles as part of this wilderness – mandate. But Park Rangers can’t control the human activities that happen outside park boundaries. Human activities that alter the island’s natural processes – including dredging and climate change — involve other government agencies, people who use the barrier islands and local ports, and everyone around the world contributing to greenhouse gases.

Satellite images can document changes in the size and shape of barrier islands from space. Using Google Earth Pro to view the four satellite images of Petit Bois Island in the KMZ file, document how the island has changed since 1984.

The class will be divided into three groups, (A, B, and C) with each group responsible for researching and reporting on their assigned questions to the rest of the class. Based on the information presented by each group, the class will make a recommendation about how to manage changes on Petit Bois Island.

1: What are the implications of Petit Bois shrinking or disappearing?

To complete this exercise, students will need:

For teachers, there is a guide for teachers and a teacher version of the Petit Bois Island KMZ file, in addition to the above resources.