SkyTruth uses satellite imagery and digital mapping to call attention to the impact of existing mines and the potential impact of proposed projects, and to enable citizens to monitor pollution and take action to protect their environment.

Mining has provided the materials for critical advances in civilization, ranging from fuel, currency, tools, jewels and weapons, but it remains among the most destructive of all human activities. The scars on the earth both historic and ongoing resulting from a variety of mining techniques for a variety of resources have provided the basis for much work for SkyTruth over the past 15 years.

Our landmark mountaintop removal surveys continue, providing datasets for important research work that has moved policy. We’ve monitored the mining of western coal, the exploration of tar sands and the extraction of uranium for nuclear power. We’ve documented extensive environmental impacts resulting from metals mining such as copper and gold. 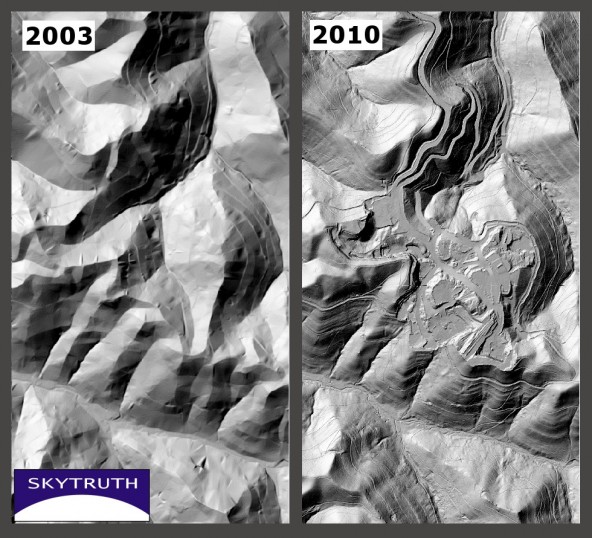 3-D terrain analysis of the Spruce #1 Mine in Logan County, depicting the complete rearrangement of the mountain between 2003 and 2010.

Advances in technology and growing demand for energy has allowed mining companies operating in the Appalachian Mountains to extract coal through a devastating practice known as mountaintop removal (MTR). Coal companies engaging in MTR mining blast away ridge tops with explosives to expose the coal seams underneath. When all the coal has been removed, giant earthmovers dump the “spoil” (any part of the mountain that isn’t coal) into the valleys below. Environmental groups sounded the alarm about the threat posed to human and ecological health by this practice, but nobody – not even the government agencies charged with overseeing the industry – had a reliable map of where exactly the mining was underway and how many mountains had already been leveled.

View map in a larger window

In partnership with Appalachian Voices, SkyTruth used satellite data to map the location and growth of MTR mines over a 30-year period and found that the amount of landscape directly impacted by MTR increased from a total of 77,000 acres in 1985 to more than 272,000 acres in 2005, increasing by 3.5 times. The size of individual mines also increased, some to more than 15 square miles. In all, the satellites show more than 2,700 ridge tops were impacted. SkyTruth’s analysis provided the foundation for nonprofit groups and scientific researchers to expand their understanding of the impacts of MTR.

So far, our MTR analysis has been used by:

The EPA’s decision is still being contested in a drawn-out legal battle and the final outcome will be pivotal to the future of Appalachia. SkyTruth is also working with Appalachian Voices to enable citizens to report coal mining pollution and safety issues through the Appalachian Water Watch (AWW) tool. AWW is a coordinated effort to train citizens to conduct routine water sampling and water-quality measurements, part of our skytruthing vision for an environmentally aware and motivated public.

At SkyTruth, we are following the evolving issue of coal exports as demand in Asia increases. Exporting coal means even more mining here at home, long coal trains transporting it to ports through busy cities, increased train derailments, and more dirty coal terminals that spill and flood. Below, the Timelapse project by Google using Landsat imagery captures the rapid buildout of Powder River Basin coal mines in the Thunder Basin National Grassland.

Visit our blog to see our analysis of the Powder River Basin, see the mines like this one compared with more familiar features like San Francisco, and get an idea how big the trains are that carry all this coal to foreign markets.

Canada’s tar sands received a lot of attention as environmentalists and other citizens protested the proposed Keystone XL pipeline expansion through America’s heartland. This source of unconventional oil is the reason huge chunks of boreal forests have been clearcut to make way for mining. Processing requires massive energy inputs and poses a high risk of pollution whether the oil is transported by train or by pipeline. At SkyTruth, we’ve created images that show viewers the gigantic mine at the originating end of the pipeline: the huge Athabascan Tar Sands in Alberta, Canada where oil is extracted in an energy-intensive process from vast amounts of sand. Our images and video show how the footprint of a single large mine such as this can dwarf a city like Washington DC in comparison. They are a reminder to everyone of what’s at stake if we support continued expansion of this unsustainable energy source.

If you have suggestions for new ways SkyTruth can help put the enormity of this industrial operation in perspective or investigate the impacts of these operations, please contact us. Reports are emerging of spilled oil seeping from unknown sources in the Cold Lake area, but details remain limited.

The nuclear renaissance has been teetering somewhere between reality and possibility for many years. On one hand, the number of planned and proposed reactors worldwide was growing in the mid-2000’s, with 93 new projects proposed in 2007 alone. However,  the disaster at Japan’s Fukushima Daiichi plant in March 2011 revived fears about nuclear power. Some analysts say the boom is coming back, other say it was a “fairy tale”.  Either way, as long as uranium is used for power production, medical, military, and industrial purposes, we can expect uranium mining and processing will continue. Because of the environmental harm that these operations can cause, SkyTruth keeps a watchful eye on new mining claims and existing operations. Between 2001 and 2010, Cotter Corporation considered putting this defunct uranium mill (a Superfund site just south of Cañon City, Colorado) back into operation. While the company eventually abandoned plans to restart it, we noticed that parts of the facility were in a “high-risk” area for flooding according to FEMA. According to a public health assessment of the facility, the mill did flood in 1965, but dams are supposedly in place to prevent runoff from the mill. 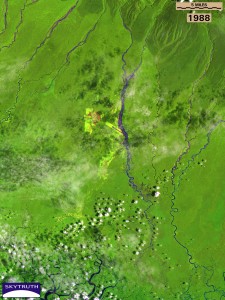 Landsat image of southern Indonesia from 1988 showing a town, some agriculture, and a normal looking network of rivers draining the mountains to the north. 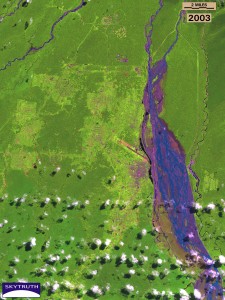 In 2003, Landsat detected a very different scene as tailings (waste rock) from the colossal Grasberg copper/gold mine are legally dumped into the river for disposal. Learn more here.

Ancient history is often categorized by the materials our ancestors mined and made their tools from. Today, we still mine copper (a principal component of bronze) and iron in large quantities, a wide range of other metals and rare-earths essential to modern comforts, and even gold, a beautiful material with a dirty past and few practical uses. However, mines have a huge impact on the environment that can easily be observed from space. Especially with metal ore mining, most of the rock removed is processed on site with toxic chemicals and dumped into colossal tailings piles. SkyTruth uses satellite imagery to both observe the scale and impact of existing mines,  simulate the impact of proposed operations, and support the work of our partners like Earthworks who are actively engaged in mining issues.

One of the world’s biggest open-pit gold mines, the Pebble Mine, is being proposed in southwest Alaska within one of the most productive salmon watersheds in the world.  Sportsmen, commercial fisherman, and many native Alaskans, and former Alaska governor, the late Jim Hammond, are concerned that the mine could affect the economically important wild-salmon fishing and tourism industries. 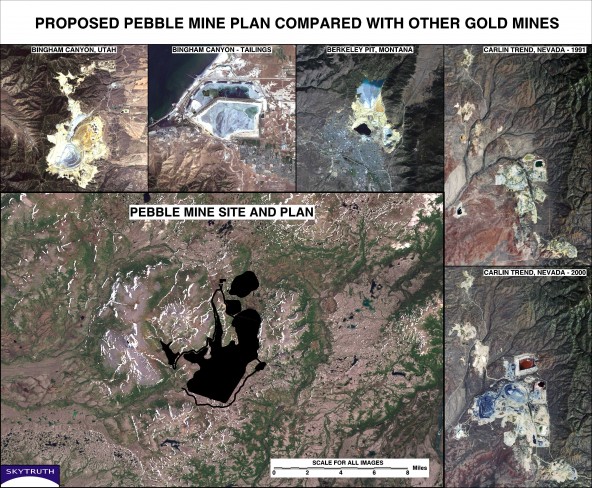 SkyTruth has generated a gallery of satellite images showing what the mine site looks like now, and a series of simulations based on several versions of the mine development plan that have been published by the mining company, Northern Dynasty. By carefully reviewing the company’s permit application, we’ve discovered that their current plans provide for less than a third of the disposal needed  to contain the billions of cubic yards of mine tailings (a liquified slurry of ground-up ore that has been treated with cyanide and other chemicals to remove the gold, copper and other marketable metals)  and reactive wasterock  (non-ore-bearing rock that will be blasted out of the way  to access ore, and will react with rainwater to form acidic runoff ) that will be generated. To accommodate the full amount of waste generated, SkyTruth has illustrated how much larger the Pebble Mine would need to be.

On November 5, 2015, a mine-waste dam collapsed at an enormous iron mine in southeastern Brazil. The wave of toxic waste was at least twice the volume of the Johnstown Flood, and wiped out buildings and bridges over 40 miles downstream. Using post-spill satellite imagery and Google Earth, we have produced a bird’s-eye view of the devastation wrought by the deluge of arsenic-laced sludge. During the spill, we reported extensively on the immediate aftermath visible on satellite imagery, the remaining threat of a possible second dam failure (which thankfully did not materialize), and by looking back in time with historical satellite imagery, documented the increase of waste in the impoundment behind the failed Fundão Dam. We also wrote about how frequently these kinds of disasters occur around the world.

For more example of mines around the world, check out our mining galleries on Flickr.

The Berkeley Pit, a Superfund site on the north edge of Butte Montana. Closed since 1982, this enormous pit has been slowly filling with acidic water contaminated by arsenic, copper, cadmium, cobalt, and other toxic materials. To the right of the pit, active mine operations continue and tailings (waste rock) accumulate in the blue/grey impoundment to the north. See more about this site here, and learn how SkyTruth helps mining impacted communities here. Landsat Compilation by Google Timelapse.

Read More
Scroll to top
SkyTruth and/or its third party tools use cookies to monitor traffic in the aggregate on our websites and applications and to improve user experience. If you continue browsing, we'll assume you agree to the use of cookies. You can change your cookie settings at any time in your browser settings. Find out more in our privacy policy.