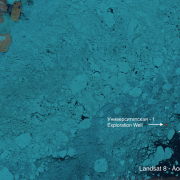 2016 has been a very mixed year for the environment. Despite some positive developments for conservation over the past year, there are even greater threats to public and ecological health looming on the horizon. We have a lot of work ahead of us in 2017, but your support can help us continue to hold government and industry accountable in the new year (while giving you a break on your taxes for 2016).

Over the past year, documents came to light proving that federal officials made misleading and unsubstantiated edits to a major report from the Environmental Protection Agency (EPA) on the threats posed by hydraulic fracturing (aka fracking). SkyTruth was among the first in 2015 to specifically identify the inconsistencies in the draft report, but at least the final report more accurately quantifies the extent of known cases of contamination from fracking. However, while low oil and gas prices have slowed some of the push for new fracking and drilling, pipelines have emerged as a new point of contention. The Army Corps of Engineers has delayed approving a river crossing for the controversial Dakota Access Pipeline, but as we wrote this month there are many more pipeline projects underway – all of them posing risks to public safety, clean air, and clean water.

Above: Footage from the 2010 Enbridge Oil Spill into Michigan’s Kalamazoo River.
via Gfycat

Off the coast of the United States, President Obama recently withdrew millions of acres of Arctic and Atlantic waters from offshore drilling. This environmental victory is the result of numerous environmental campaigns over many years, including our efforts to document the risks and accidents associated with new drilling. Additionally, President Obama is moving quickly to protect some areas from new offshore oil drilling before Donald Trump takes office in January 2017. We’ve already documented some of Exxon’s drilling activity in Russian Arctic waters (below), but we will have to be even more vigilant if ExxonMobil CEO Rex Tillerson becomes Secretary of State. Unfortunately, little has changed in the Gulf of Mexico where even after a court settlement negotiated by our partners at the Waterkeeper Alliance, Taylor Energy platform #23051 continues to leak. Taylor Energy, however, is now reneging on their responsibility to contain the ongoing leak, and is suing the federal government to recover $423 million out of $666 million which they were compelled set aside for cleanup and containment.

In July, a federal appeals court again upheld an EPA decision to revoke a massive mountaintop mine expansion permit in Logan County, West Virginia. The EPA decision was supported by scientific studies on the health and environmental impacts of mountaintop removal coal mining, some directly informed by SkyTruth’s satellite derived mountaintop removal footprint data. Yet across Appalachia, Trump and other pro-coal politicians won overwhelmingly on the promise of bringing back coal jobs. These promises likely mean decrease in regulatory oversight and cutting enforcement capability, so we will need satellites and citizen scientists to be even more vigilant.

Out at sea, things have been looking up. In partnership with Google and Oceana and with keynote addresses from U.S. Secretary of State John Kerry and actor/ocean advocate Leonardo DiCaprio, we officially launched the first public version of Global Fishing Watch. Our work using satellite data to track suspicious vessel activity on the open ocean has been chronicled in the New York Times Magazine, helped bust a Chinese fleet illegally using drift-nets in the southern Indian Ocean, and prompted the government of Belize to halt seismic testing around a protected reef – sending an oil and gas survey vessel packing. But we can’t do it alone, which is why we are making tools like Global Fishing Watch open to the public for all to use.

On November 9, 2016, the day after the U.S. elections made it clear that we will be facing at least four years of a pro-drilling, pro-mining, anti-regulation Administration, SkyTruth President John Amos wrote:

We believe governments and businesses work better to protect the environment, and to ensure human health and well being, when the consequences of their action and inaction are plain for all to see. Persistent public vigilance has always been necessary for a functioning democracy. It’s especially crucial when governments are disdainful of environmental protection and public health and safety, dismissive of science-based decisionmaking with public participation, and openly hostile toward the public ownership and long-term stewardship of our lands and waters.

This means we need you. We need your support, your engagement, and your vigilance. If you can see it, you can change it.