[As of October 28, 2014 NRC data is being regularly updated at http://www.nrc.uscg.mil, typically on Monday. Download the “2014 Reports” file which should include all 2014 reports through the preceding Monday.] [June 9, 2014 – Shepherdstown, WV] An environmental conservation and mapping group is hosting an updated database of the most recent federal pollution reports until public access to the designated source is restored. West Virginia-based SkyTruth tracks pollution and environmental issues through remote sensing and big data such as this nationwide pollution report database from the U.S. Coast Guard’s National Response Center (NRC) for oil and hazardous materials spills.

Public access to data from the NRC has been offline since February 21, 2014, reportedly due to an extensive rebuild required to comply with new federal cyber-security requirements. NRC officials told SkyTruth it could take up to a year to fully restore the website, but in the interim their staff would provide a weekly update containing all the pollution reports received during the calendar year at an alternate website.

Our staff is working to incorporate these changes into the SkyTruth Alerts system to restore regular, automated email notification of pollution incidents to Alerts subscribers.

Anyone witnessing an oil spill, chemical release, or maritime security incident can report it by calling the NRC hotline at 1-800-424-8802

This week for throwback Thursday (#TBT) we’re looking at gold mining in the Madre de Dios region of Peru.  If this sounds familiar, then bonus skytruther points for you because we did in fact write about this region last fall. A recent crackdown on illegal mining inspired us to give this region another look, and show you what it looks like through the lens of the Google Timelapse. What you’ll see in this part of the Amazon is rapid mine development over the years and sediment-laden runoff from the mines and deforested landscape infiltrating surrounding waterways. Feel free to zoom in and do some exploring of your own.

On April 19th the Peruvian government took action against illegal mining in this region and halted the shipment of gasoline to the Madre de Dios area.  Troops were also sent to destroy any heavy machinery that could have been associated with illegal mining activity (if the miners in the region really look like their statue in the Huepetuhe town square, those must have been some seriously strong troops).  In the wake of the government’s intervention the region has gone bust and the mayor of Huepetuhe estimates that approximately 22,000 people have left town, leaving only 3,000 in a serious state of transition.

Over the years, small-scale ‘wildcat’ mining reached staggering proportions in the region, causing obvious damage to one of the most biologically diverse places on Earth.  Deforestation, mercury contamination and sediment-laden runoff are just a few of the major concerns facing this environment. 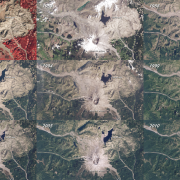 We’re heading to the Pacific Northwest for this week’s throwback Thursday (#TBT) to check out the changes on and around Mount St. Helens over the years.  The 1980 eruption certainly wasn’t the largest or deadliest eruption in recorded history, but it may be one of the most thoroughly researched.  For over 30+ years, scientists have been exploring how the landscape recovers from such a catastrophic event.  But it may surprise you that there’s an even bigger transformation going on in national forests around this infamous stratovolcano.

All around the mountain, logging companies have been clearcutting large tracts of the national forests for timber. If you look at this map of global forest cover from the University of Maryland, you will see a checkerboard of growth, loss, and a mix of both. But keep in mind, the areas that show gain are not necessarily diverse, old-growth forests, they are most likely a monoculture crop grown over decades instead of months.

The google-powered Timelapse below allows you to view the landscape changes around Mount St. Helens from 1984 to 2012 (the eruption occurred in 1980).  After you explore the Timelapse, you can also check out the Global Forest Watch to see exactly how the forests have changed over the past 12 years. 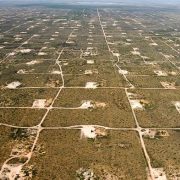 This week for throwback Thursday (#TBT) we’re going deep into Friday Night Lights territory and checking out the landscape of West Texas. We’re looking at the area around Midland and Odessa to see how fracking in the Permian Basin has triggered a new oil boom that has transformed the region in recent years.

The Google-powered Timelapse shows the surge of oil and natural gas extraction in this region.  As of today, there are 546 drilling rigs working the Permian shale formations – over a third of all onshore drilling rigs pursuing oil in the US.

Do some skytruthing of your own by zooming in or out of the Timelapse.  If you’re interested in more Texas viewing, check out the Yates Oil Field in Pecos County (which is west-southwest of this view).  Take a screenshot and let us know what you find via Facebook and Twitter. 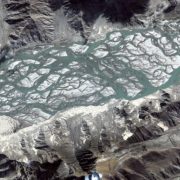 This week for throwback thursday (#TBT) we’re setting our sites on the Brahmaputra River in India.  We’re checking out the river around Assam and seeing how it shifts and changes over the years.

This 1,800 mile long river begins as snowfall in the Himalayas and is a prime example of a braided river. As you can see from the google-powered Timelapse, the Brahmaputra River is made up of many small channels and bars that meander and change over time due to all the sediment eroding and washing down from the mountains. Plus the amount of water flowing in the river is constantly changing based on how much snow and ice is melting. The amount of meltwater, of course, depends on the season and time of day making for a very wide and unpredictable waterway.

Do some skytruthing your own– zoom in or out of the Timelapse to see how the braids change and weave over time. And look around the globe for other rivers draining uplifing mountain ranges. What is the most interesting braided river you can find?