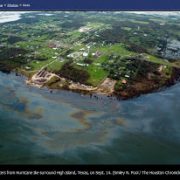 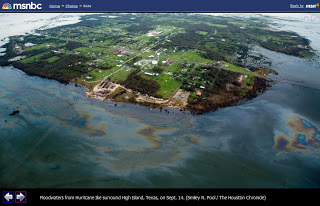 MSNBC is running a small gallery of photos of post-Ike destruction, including a shot by The Houston Chronicle showing oil slicks covering floodwaters around High Island, Texas. This is the same area shown in SkyTruth’s mosaic of NOAA aerial photographs, and it was taken on the same day (September 14). It’s pretty clear that this is indeed floating oil. You can follow this particular slick back to multiple sources on our mosaic, or by using Google Earth (look at Mosaic 8 in this KMZ file to see the High Island slicks).

We’ve made a mosaic with a few of the NOAA air photos that show some probable oil slicks in the Galveston area in the wake of Hurricane Ike. Here’s a larger view. And if you want to download a 30″ x 12″ version (at 200dpi), click here. These images show an area that is still under a few feet of water — you can see roads and other features through the greenish murk of the floodwaters.

And now you can explore the NOAA air photos with Google Earth. GE users, here is the KMZ file. This is very useful – you can toggle the NOAA photos on and off, and see from the underlying hi-res Google imagery exactly what facilities seem to be the source of the slicks. Mosaic 8 in the KMZ includes the area shown in the SkyTruth mosaic at the top of this post. NOAA has just posted aerial photographs taken on September 14-15 in the Galveston area. These photos show what might be oil slicks, some originating at what appear to be large storage tanks. We can’t say for sure at this point, and we can’t tell how thick the oil is from these photographs — much of it may be thin “sheen” — so we don’t know how big these possible spills are. So take a look for yourself. Here’s our preliminary analysis. We don’t have any confirmation so be skeptical. If you can confirm or refute any of this, please provide a comment. 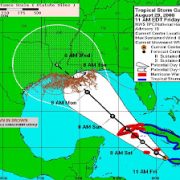 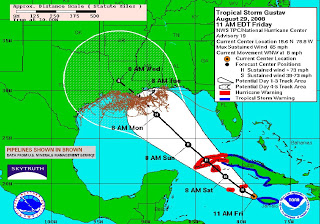 Hopefully not, but exactly three years ago today, Hurricane Katrina made landfall after buzzing through the offshore oilfields in the Gulf of Mexico as a Category 5 storm (we documented some of the resulting offshore oil spills), and now it looks like Hurricane Gustav may be heading for the same trajectory. It just regained hurricane strength today, and forecasters have been predicting at least a Category 3 storm when it reaches the hot water of the central Gulf of Mexico.

We’re also hopeful that the mooring systems for floating drill rigs have been significantly strengthened. During Katrina, some of these huge rigs broke loose and got blown around the Gulf, dragging their anchors across the seafloor and tearing up the pipeline network. We think that caused many of the offshore slicks we observed on satellite imagery.

But most of the oil spilled by hurricanes Katrina and Rita happened onshore: over 9 million gallons, according to the U.S. Coast Guard, spilled from coastal refineries, storage tanks and pipelines – 6 major spills (>100,000 gallons), 5 medium spills, and over 5,000 minor spills. And those onshore facilities are just as vulnerable now as they were three years ago. Let’s keep our fingers crossed and say a prayer for the folks down along the Gulf coast. And keep an eye on Gustav. (What’s that you say? Hanna too?? You gotta be kidding me….) 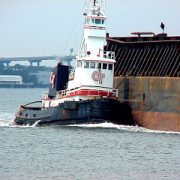 Another of those treacherous San Francisco Bay bridges – this time the nefarious Richmond-San Rafael bridge – apparently jumped out in the path of a barge carrying nearly 65,000 barrels (2.7 MILLION gallons) of heavy oil last night. The Coast Guard reports that none of the oil has been spilled, although the barge was damaged on the starboard bow and the hull may have been breached. Check out the story by KRON Channel 4 and their video news conference with the Coast Guard. 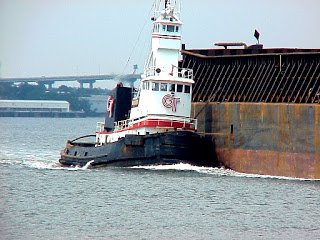 Coming so soon after the Cosco Busan fuel-oil spill in the Bay, this is a vivid reminder that accidents will happen. In this case (so far at least) the folks in San Francisco have gotten lucky and the Coast Guard response was timely. I hope the folks living around Puget Sound, Chesapeake Bay, Delaware Bay, and other busy port areas in confined estuaries are paying close attention and keeping on their toes – it’s only a matter of time before spills occur, and as the Cosco Busan incident illustrated, immediate effective response is necessary to prevent costly damage to both local economies and natural resources.