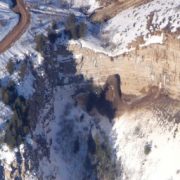 Colorado environmentalists who flew up to the head of Garden Gulch in western Colorado on March 19 were hoping to take some aerial pictures of a frozen “waterfall” of spilled drilling fluid that had been investigated by state Department of Natural Resources staff in late February (see our previous posting on the spills that have plagued this area of intensive drilling for natural gas). 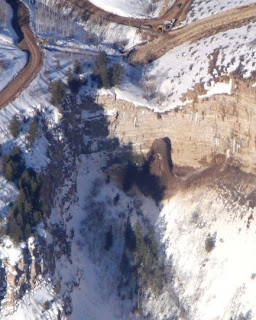 Instead, they found something truly astonishing that hadn’t been reported: a 100′ tall tower of frozen mud, apparently caused by severe erosion of soil from dirt roads and pipelines that were being built near the rim on the Roan Plateau. Two backhoes and several trucks are plainly visible in these pictures, taken by Pete Kolbenschlag of Mountain West Strategies during a low-altitude flyover by our friend Bruce Gordon of EcoFlight.

What else is lurking out there? Let us know if anything strange pops up… 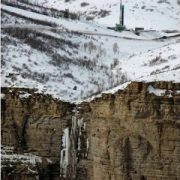 Been hearing a lot lately about how “clean” natural gas is as an energy source. Well… the Colorado Department of Natural Resources just learned about four spills of waste drilling fluids into Garden Gulch, a tributary of West Parachute Creek in western Colorado. There is intensive drilling for natural gas occurring throughout the area around the Roan Plateau. Critics of the Bureau of Land Management’s recently announced plan to allow drilling on top of the as-yet untouched Plateau — including Governor Ritter and Senator Salazar — are worried that this is exactly the kind of thing that will happen, polluting surface water and ground water. 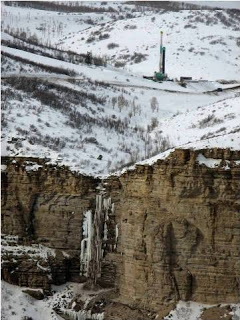 One of these spills, totaling 1.2 million gallons, created a most unnatural wonder: a frozen “waterfall” composed mostly of spilled drilling fluids, according to the DNR. Check out the photos in our image gallery. When this thing thaws out it will run directly into the creek. Bad news for the trout, bad news for fishermen. 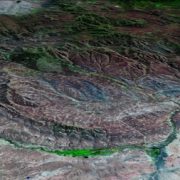 Plans to drill for natural gas in Wyoming continue to proliferate. We’ve attempted to simulate one of the more controversial proposals to allow drilling for coalbed methane across a rugged scenic area in south-central Wyoming, noted for wildlife and hunting / recreation opportunities, called the Atlantic Rim. 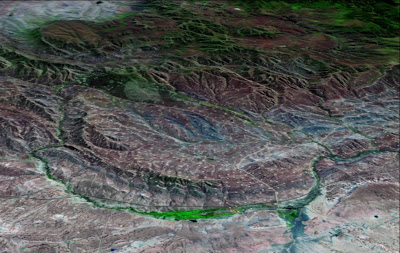 In March 2007, the Bureau of Land Management issued a final environmental impact statement and record of decision for managing this area that allows up to 2,000 wells drilled from individual well sites (wellpads) about 2-1/4 acres in size, with the closest spacing being one well per 80 acres. Our online gallery includes both topographic maps and Landsat satellite imagery showing the area as it is now, and how it could appear if drilling conforms to this plan. 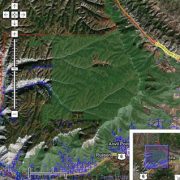 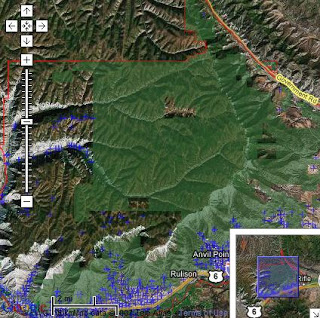 Environmental Working Group just released a compelling report that shows the history of gas and oil drilling on and around the Roan Plateau in western Colorado. This work puts the numbers behind the tremendous burst of drilling illustrated by SkyTruth images. 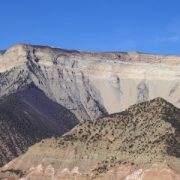 Lots of controversy surrounding the U.S. Bureau of Land Management’s plan to allow drilling for natural gas on top of the stunning Roan Plateau in western Colorado. The governor asked for extra time to review the plan, and sportsmen’s groups have taken a stand against drilling. Even surrounding towns have adopted resolutions against drilling the Plateau. 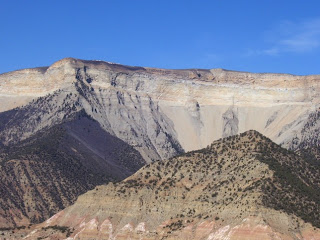 It’s not as if Colorado is unfriendly to drilling: the foot of the Plateau is busy with rigs, as is private land up on top. This area, known to geologists as the Piceance Basin, is one of the most active natural-gas plays in the nation. Check out the SkyTruth image gallery to see the scope of drilling impacts on the landscape here. Lots of satellite images showing the spread of drilling over time, and great aerial shots with more detail taken by our friends at EcoFlight.