Permanent plugs have successfully been installed and pressure-tested in the notorious H1 well that blew out on August 21, 2009, in the Timor Sea and spewed oil and gas for 71 days. Some information is now trickling out as the Australian government investigates the causes and consequences of the Montara / West Atlas blowout and ten-week oil spill. News accounts have focused on the drilling contractor’s apparent failure to install a basic piece of safety equipment called a corrosion cap. This seems like a serious mistake for a major offshore drilling contractor like Seadrill. But we’re not yet sure that the lack of this cap could, on its own, cause the well to blow out.

Upstream’s coverage provides the most technical detail. Apparently there was an existing weakness in the well due to a poor cementing job. Ho hum, cement…but as they say, the devil is in the details…so bone up on well drilling (especially the section on cementing) before you go much further:

This article also raises a lot of questions. It states that in August PTTEP determined no corrosion cap had been installed when the H1 well was suspended in March. Yet on August 20, “the corrosion cap was removed” to “clean corroded casing threads,” the cap “was not reinstalled,” and the well blew out the next day:

Wonky stuff, for sure. But it’s important to get all of these questions asked, and answered, before the government closes the books on this investigation, so we can be sure we know what really happened. 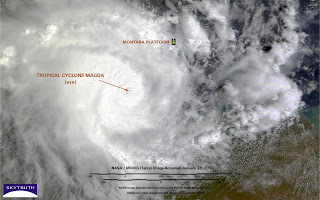 Meanwhile, another tropical cyclone is making a Montara drive-by. This time it’s Magda, a Category 2 storm with sustained winds of 60-70 knots. On January 21 at 0:50 hours Zulu time, this MODIS Terra satellite image showed the eye of Magda to be about 186 km southwest of the Montara oil platform. The storm is moving almost directly south, and should not pose a threat to operations as crews are now assessing the structural integrity of the fire-damaged platform. 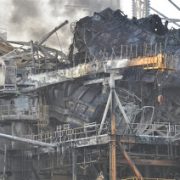 Good news out of Australia – the well that blew out on August 21, spilled crude oil into the ocean and natural gas into the air for ten weeks, then caught fire and burned out of control for 2 days when the leak was finally stopped – has been permanently plugged and capped, according to a report from Upstream Online today. That’s almost five months since the blowout occurred. No doubt the plugging operation was made a bit more complicated due to fire damage sustained by the Montara oil platform: 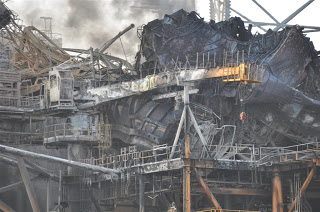 No word yet on what will be done with the other wells that had already been drilled at the Montara platform. Will they too be permanently plugged, capped and abandoned? Or will the operator, PTTEP Australasia, attempt to put them into production?

Read all about the Timor Sea blowout and spill on this blog, and see photos and satellite images of the spill in SkyTruth’s gallery.

We closed out 2009 with another stunning reminder that human error still poses a major risk for oil spills and other environmentally significant accidents: a high-tech escort tug, the Pathfinder, hit the very same well-mapped reef in Prince William Sound that the Exxon Valdez ran up against twenty years ago. Unlike the earlier tanker accident, which spilled 11 million gallons of crude oil and crippled some Alaska fisheries and communities, this one only resulted in a minor spill of 100 gallons or so of fuel oil. But this latest accident is disturbing because the Pathfinder’s job is to escort laden oil tankers safely through these ecologically important Alaskan waters.

If the safety escort hits a notorious reef, then just how safe is this operation? As noted in this December 30 article in the Alaska Dispatch:

None of the fancy technology aboard the 136-foot tug Pathfinder — not the satellite positioning system, not the radar, not the depth finder capable of sounding depth warnings — prevented a Dec. 23 collision with Bligh Reef, and Alaskans monitoring oil tanker safety in Prince William Sound say that ought to serve as a warning for everyone concerned about the northern environment.

Even the Coast Guard seems to have been asleep at the wheel:

Not only did the navigation systems aboard the tug somehow fail to alert the crew to danger, Jones said, so did the Coast Guard Vessel Traffic Center in Valdez, which is supposed to track tankers and tugs using the shipping lane into and out of Valdez. The center has radar watching the Sound, and the tankers and tugs are supposed to carry “position and identification reporting equipment” to enable the traffic center to track them in much the way air-traffic controllers follow the movement of airplanes fitted with transponders. And yet the Pathfinder somehow strayed off course even farther than the Exxon Valdez. The latter struck bottom in about 35 feet of water. The former had to get so close to the center of the reef that its keel hit the rocks in 17 feet.

So how can this kind of problem continue to happen?

“It’s strictly human error,” Stephens said, “being where you’re not supposed to be. It’s usually human error. There are lessons to be learned from this. The more eyes the better.”

That’s a problem that’s particularly relevant for offshore oil production and transportation, because, as we’ve seen so recently with the Montara blowout and spill off Australia, the consequences can be severe. One final thought from Alaska:

…the money spent on prevention could save a fortune on potential clean-up costs later. Prevention of an oil spill…is better than any possible clean-up effort. 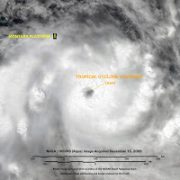 Actually, it’s called a cyclone in that part of the world. Now a small but surprisingly powerful Category 5 storm, Cyclone Laurence is moving through the Timor Sea parallel to the northwest coast of Australia, and is expected to make landfall near the town of Derby today. 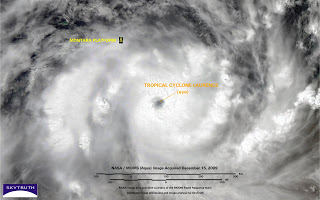 The oil fields in the Timor Sea have been evacuated, including the crew on the Montara platform where they’re still working to install a permanent cement plug in the well that blew out on August 21 and spilled oil and gas for ten weeks. The well-defined eye of this storm, 19 miles in diameter, passed about 130 miles southeast of the platform on December 15. The storm was moving then at about 15 miles per hour toward the southwest.

Nasty weather really complicates operations at sea. Hopefully the temporary mud plug will hold until they can get back and finish this well-control job. 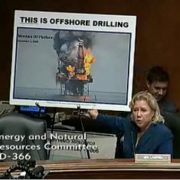 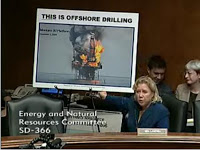