You are here: Home1 / Mining
[Updated on Nov. 16 with additional satellite images] On Thursday, Nov. 5 in the State of Minas Gerais, Brazil, two mine waste impoundments at the Samarco iron mine failed, burying the nearby town of Bento Rodrigues and sending 62 million cubic meters of toxic sludge downstream – impacting villages and rivers up to 400 kilometers away. So […]
END_OF_DOCUMENT_TOKEN_TO_BE_REPLACED
https://skytruth.org/wp-content/uploads/2020/11/SkyTruth-Header-Logo-C.png 0 0 David Manthos https://skytruth.org/wp-content/uploads/2020/11/SkyTruth-Header-Logo-C.png David Manthos2015-11-14 16:24:002021-12-17 11:43:37[Updated] Satellites Reveal Extent of Samarco Mine Disaster in Brazil 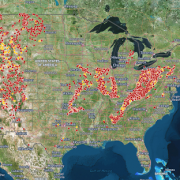 Did you know there are 48,529 abandoned coal mines in the United States which are known to pose a threat to the public and/or the environment? This number comes from the most comprehensive federal database that we know of – the enhanced Abandoned Mine Lands Inventory System (eAMLIS) maintained by the Office of Surface Mining (OSM). Of […] 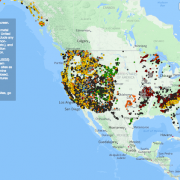 On August 5, more than 3,000,000 gallons of acidic, heavy-metal-laden mine waste from the Gold King Mine polluted the Animas River in southwestern Colorado. Ironically, the accident occurred while contractors for the U.S. Environmental Protection Agency (EPA) were trying to plug a smaller leak from the inactive mine that was already polluting the river.  This was […]

Wondering what SkyTruth has been up to lately?  Here’s a quick rundown: Pearl Award We were honored to receive the 2014 Jean and Leslie Douglas Pearl Award, given to those “dedicated to improving the lives of others and to providing a sustainable earth for future generations.” Pollution – Oil and Gas – Fracking MSNBC interviewed […]

SkyTruth – Shepherdstown, WV: On Monday, August 4, 2014, an approximately 580 acre tailings impoundment failed at a Canadian gold and copper mine near Likely, British Columbia. The breach at Imperial Metal’s Mt. Polley mine dumped an estimated 1.3 billion gallons of toxic mine waste into the surrounding environment. On August 5, Landsat 8 acquired an image […]