Do you care about the public and environmental health issues associated with fracking, have a computer, and are at least a little familiar with Google Maps?

Then you can help map fracking ponds all across Pennsylvania’s Marcellus Shale!

UPDATE: Project Moor Frog was completed in January 2014, check our frack.skytruth.org/frackfinder to see the latest FrackFinder project. We will not have results to share with the public until Project Dart Frog is finished, so help us complete this next phase! Help us Map Fracking: FrackFinder PA – Project Moor Frog
This week we are launching a crowdmapping tool called FrackFinder PA: Project Moor Frog. In this version of FrackFinder we took all of the active drilling sites that volunteers found in Project Tadpole and created an easy-to-use website for volunteers to take a closer look at these sites. Now we’re asking volunteers to mark all the ponds big enough to be associated with drilling and fracking. There’s nothing to download, no special GIS experience, and we’ll show you everything you need to know in a brief tutorial. All you need is a good internet connection, a computer with an internet browser, and some time to help us find ponds.

We really need your help with this project because there is currently no map of these ponds that can contain millions of gallons of wastewater from drilling and hydraulic fracturing. Additionally, the Johns Hopkins Bloomberg School of Public Health has requested this map to support their study of public health issues related to air quality degradation from this industrial activity.

Volatile organic compounds (VOCs) and other chemicals evaporating from these ponds could be a factor in air pollution, a hypothesis supported by a number of federal reports from western Pennsylvania earlier this year. In July 2013 a fracking waste pond referred to as the “Carter Impoundment” (above) was reported by five different neighbors for noxious chemical odors. This kind of air quality degradation could have serious health impacts but we won’t know for sure without good data.
For several weeks in July, SkyTruth Alerts picked up federal pollution reports of “strong odors” and an “acid petroleum smell” coming from a fracking pond near McDonald, PA. The U.S. Coast Guard’s National Response Center (NRC) received a total of ten reports from five separate addresses over the course of several weeks. One report even indicated VOC levels 56 times higher than acceptable industrial levels at a private residence over 1,000 yards from the pond.

Your help with this project will help scientists better understand the environmental and public health issues associated with these ponds and fracking as a whole. Check it out and volunteer at:

About FrackFinder: Our vision is for a world where people can see the environmental impact on the planet AND take action to protect it. To do that, we’re working to build a skytruthing movement of citizens using aerial and satellite imagery to monitor environmental change and produce real data that will inform science and decisionmakers. Just like Silicon Valley picks zany categories to name different phases of their products, we’re naming FrackFinder projects after quirky critters. So far our project names are all frog-related because who loves a (well)pad more than a frog?

Late August we announced the completion of the first stage of FrackFinder, Project TADPOLE where we asked you all to help us identify and classify wellpads in the Marcellus Shale region of Pennsylvania. We used state drilling data to identify 2,963 hydraulic fracturing (fracking) sites that might have had drilling and fracking activity occur sometime in or after 2005. Why these dates? Because in 2005, 2008, and 2010, the U.S. Department of Agriculture’s National Aerial Imagery Program (NAIP) flew high resolution aerial photographic surveys, which you may already be familiar with from the “satellite” view in Google Maps. And because most of the drilling and fracking targeting the Marcellus Shale has happened since 2004.
At nearly 3,000 sites observed at each of the three years, we had almost 9,000 images for all of you to look at. For quality control, we had each image viewed and categorized by 10 different volunteers, making a grand total of around 90,000 tasks to perform. As colossal as that may sound, it took just 29 days for our 233 volunteers to complete the first phase of the project.
We’ve done some random spot-checking and number crunching and determined that if at least 8 out of 10 volunteers agree on a classification, the top answer is the correct answer. According to this confidence rating, 90% of our results were accepted as accurate. We’ve plowed through the last 10%, about 900 of the more ambiguous images that you all couldn’t quite agree on, and categorized them ourselves.

So we’ve analyzed the results — insert drum roll here… According to the FrackFinder project, in 2005, only 60 well pads – flattened dirt or gravel areas where one or more wells may be located – existed in the Marcellus Shale region of the state of Pennsylvania. In 2008, 410 new well pads were located. In the 2010 NAIP imagery, 950 additional new well pads were located. (I find the rate of increase in fracking activity quite noteworthy.) Total, our volunteers have found 1,420 well pads over the 5-year period.

Above: Animation of well pads from unconventional oil and gas drilling sites in Pennsylvania – 2005 (yellow), 2008 (orange), and 2010 (red)  – according to FrackFinder: TADPOLE – PA results.

For more detail, you can view the interactive map where you can zoom in on individual sites even link to an image of the well pad. 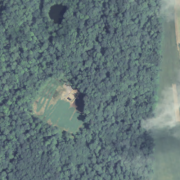 Exactly two weeks ago, we officially launched the first stage of our new skytruthing initiative – FrackFinder: Project TADPOLE. Since the launch, our amazing volunteers have taken the project from 10% complete to 73% complete; that’s over 64,000  completed tasks (task = number of times an image is viewed and classified).
Above is a live, interactive map that illustrates, by county, the progress that our FrackFinder volunteers have made toward completing all tasks for Pennsylvania. So far, we have focused on natural gas drilling and fracking in the Marcellus Shale region of William Penn’s woods. Now, we are working on preparing the next stage of this project, which expands FrackFinder to the Marcellus Shale region in another state – West Virginia.
We continuously keep the lines of communication open with our volunteers and have gotten some great feedback. One volunteer shared with us an image that seems at first to be a bad photoshop job. The image, shown below, was captured by an aerial survey in 2010 over a permitted wellpad in Butler County, Pennsylvania. However, while it looks electronically manipulated, we believe that the image is really a sort of  real-world photoshop called hydroseeding. Hydroseeding is a reclamation process that involves spraying a slurry that contains seeds, fertilizer, mulch, and/or soil stabilizer, etc., on bare earth to help re-vegetate and prevent erosion.
While they missed a few spots, suggesting the job was done haphazardly, partial hydroseeding is at least better than leaving re-graded slopes bare and susceptible to erosion. More current imagery, found in Google Maps, shows the vegetation beginning to grow back in patches and at least part of the site plowed for agriculture.
Have you seen anything out of the ordinary or interesting while using FrackFinder? Send us a screen capture of the image in question, including the location data (County, year, and the lat./long. coordinates) directly above and below the image. Also, if you would like to be a part of preparing and refining the the next stage of FrackFinder, please contact us.

Last week we officially launched FrackFinder, a crowdsourced skytruthing project to find, map and track natural gas fracking sites. The first stage of the effort, Project TADPOLE, focuses on the Marcellus Shale region of Pennsylvania. Using data from drilling permits for fracking sites in PA and aerial survey photography taken by the National Agricultural Imagery Program (NAIP), we ask volunteers to identify what they see at each fracking site over a 5 year period. Thanks to an article the Washington Post published about our work here at SkyTruth, FrackFinder has been getting a lot of attention!

Within one week of the article’s release, Project TADPOLE gained 84 volunteer participants and jumped from 10% complete to 52%; that’s over 35,000 tasks (number of times an image is viewed by a volunteer) completed in one week. Of the 84 volunteers, 31 participated anonymously. Our anonymous volunteers averaged 49 tasks per person, and volunteers who chose not to work anonymously averaged 630. Impressively, several volunteers have completed thousands of tasks!

Progress of Project TADPOLE by county.
To keep everyone updated on the status of Project TADPOLE, we’ve created an interactive map that illustrates the progression of the project. The completion status for each county is measured independently and color coded accordingly. It is sort of exciting watching the counties change color as we move toward the finish line! Of this stage, that is.
We’ll soon need to prepare for the next stage of FrackFinder… TREE FROG?
Stay tuned!
/wp-content/uploads/2016/08/test_logo.png 0 0 Yolandita Franklin /wp-content/uploads/2016/08/test_logo.png Yolandita Franklin2013-08-08 22:50:002017-09-26 15:42:54FrackFinder: Tracking Our Progress 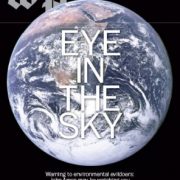 We’re pretty giddy around here today. The Washington Post just published an article and video all about SkyTruth on their website yesterday.  It will be the cover story on the print edition of this weekend’s Sunday magazine: The opening makes us look like omniscient, see-all, Bourne-Identity-like uber-spies.  Rest assured the reality is a lot more, well, down to earth.  But the article does a great job describing some of the things we’re doing, and how we do them.  And with ever-changing technology and communication tools, the opening sequence may not be too far-fetched just a few short years from now.

We’re using this amazing technology to give everyone the ability to see and share what’s happening in the environment, be it just down the block or on the other side of the planet.  If you’d like to be part of this movement, please come and join us.  We’re looking for tech geeks and programmers, image analysts and graphics pros, fundraisers and financial supporters — people who want to apply their skills and effort to work on behalf of conservation.

And we’re looking for volunteer skytruthers who can spend a few minutes helping us with our first crowd-assisted image analysis project, FrackFinder, to find and map gas drilling and fracking sites.

It’s an exciting time to be at SkyTruth!  But it’s still a very big planet, and we can’t watch over it without your help.