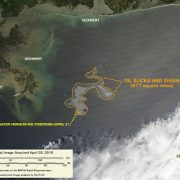 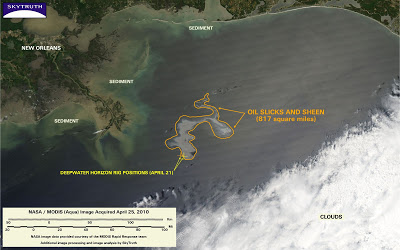 SkyTruth just processed a NASA/MODIS satellite image of the Gulf of Mexico that was taken early yesterday afternoon (April 25). Slicks and sheen (very thin slick) covers about 817 square miles, and reaches 50 miles away from the assumed point of origin (the site of the leaking well on the seafloor). We’ve posted this in our image gallery for this incident. We’ve also shown the last two positions of the rig that we were able to detect before it sank, as seen on NASA images from April 21 (also in our gallery).

UPDATE 4/27/10 1pm – We’ve added a very detailed image to our gallery, also taken on April 25, from NASA’s Advanced Land Imager (ALI) sensor carried on the Earth Observing-1 (EO-1) satellite. You can see response vessels, and gradations in the thickness of the slick and peripheral sheen. Meanwhile, the spill continues unabated, and the size of the oil slick has more than doubled since these NASA images were taken just two days ago. We hope to get new images soon. 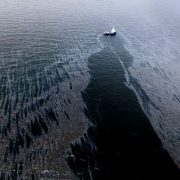 Yesterday the Coast Guard reported that the damaged well on the seafloor in the Gulf of Mexico is leaking oil again, at a rate estimated to be 42,000 gallons (1,000 barrels) per day. This is bad news – it means the blowout preventer on that well is not doing its job, and that several attempts by BP, Transocean and the Coast Guard to operate a shutoff valve on the well using a robotic ROV have failed. The oil slick has grown rapidly and now covers 400 square miles. 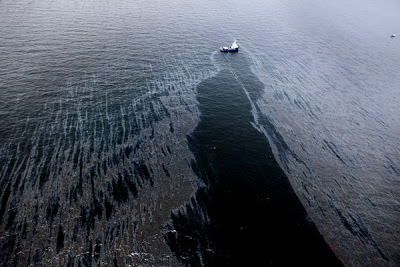 If the blowout and spill off Australia last year offer any lessons, it could be months before this well can be brought under control and the spill really and truly stopped. This is already a “major” oil spill by Coast Guard definition (>100,000 gallons), and a human tragedy. Economic losses include the $600-700 million dollar Deepwater Horizon drill rig, and as-yet untold millions in response and cleanup costs (and lawsuits from the people who have been hurt). But this blowout and spill in the Gulf now threaten to become truly catastrophic.

The NASA satellite imagery we used to track that Australia spill have been unavailable since Friday. As soon as we can get anything we’ll do our best to get it posted here.