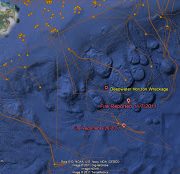 Once again an airline pilot (or observant passenger) has reported seeing a fire in the Gulf of Mexico.  This was reported to the National Response Center at about 8:19 pm on November 6, at a location in the deepwater Gulf about 12 miles southeast of the site of last year’s BP oil spill.  It’s also about 11 miles north of a fire reported on September 26 that we covered in this blog.

Both reports are in the general vicinity of the Na Kika offshore development project operated by BP and Shell.

We think these observers may be seeing flaring of natural gas during drilling operations.  We’re not sure what, if any, drilling activity is occurring here right now (if you know, please let us know!). If they are flaring “commercial quantities” of natural gas, that could be illegal – Shell got busted for doing this a few years back in the Gulf at their deepwater Auger platform about 140 miles offshore, and got fined to the tune of $49 million by the US government.

We don’t know if that’s what is happening here.  But we wonder if anyone at BOEMRE is paying attention to this.

If you’re in the Shepherdstown, WV area this Friday evening November 4, come on out to the Shepherdstown Opera House for a screening of the film The Big Fix, ‘a comprehensive investigation into the massive BP Deepwater/Horizon spill in the Gulf which digs deeper to reveal a darker more unsettling truth about the world we live in today. By exposing the root causes of the spill, filmmakers Josh and Rebecca Tickell uncover a vast network of corruption that not only caused one of the greatest environmental catastrophes of all time but may also lead to something that could be even more damaging to life as we know it; an inevitable global currency collapse.’

The film will be followed by a panel discussion with none other than our own SkyTruth president, John Amos, as well as Doug Inkley of the National Wildlife Federation and Joel Achenbach of the Washington Post.  Joel is also author of a riveting book about the spill, A Hole at the Bottom of the Sea.

As if that wasn’t exciting enough, if you DO come out to the Opera House, don’t forget to set your DVR’s and Tivo’s for the SkyTruth interview with West Virginia’s PBS. Our segment will be shown on Friday night’s episode of This Week In West Virginia, which will be airing at 8:00 p.m. If you miss that airing, don’t fret! Another airing will be shown on Sunday, November 6 at 6:00 p.m. 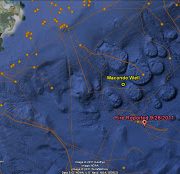 This just caught our eye on the SkyTruth Alerts:  multiple aircraft flying over the Gulf late last night reported seeing a fire about 60 miles southeast of the tip of the Mississippi Delta, in deep water about 20 miles south-southeast of BP’s failed Macondo well. The source of the fire is unknown, and to our knowledge this has not yet been verified, but the location given in the NRC report puts this in Mississippi Canyon Block 519, where wells have recently been drilled by Noble Energy and tied back to the massive “Na Kika” platform located in Block 474 a few miles to the northwest. A few small spills of hydraulic fluid have been reported in the vicinity in the past week so we know there is current activity in the area.

The Na Kika cluster of offshore fields is among the deepest in the world, with water depths exceeding 6,500′ and wells reaching down more than 12,000′ beneath the seafloor. (Na Kika is the “octopus god” of Polynesian mythology.  Seems appropriate.)

BP is the operator of this development, with Shell a major partner.

Here is a map showing the reported location of the fire. Platforms are shown as orange dots; pipelines are orange lines; the Mississippi Delta is at upper left, and the Macondo well site is shown for reference:

Subscribe to SkyTruth Alerts (it’s free!) and you’ll know it when we know it. 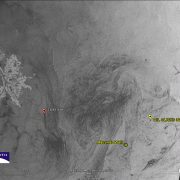 We are focusing particularly hard on the area of the BP / Deepwater Horizon oil spill in recent days, after documentation of slicks in the area near the Macondo well site on August 19, and about 15 miles to the northeast on August 30.  The small area of thin slick sampled by Ben Raines on August 23, about one mile from the well site, was chemically tested by Ed Overton of Lousiana State University who declared it a “dead ringer” for Macondo crude oil; possibly leaking from the wrecked Deepwater Horizon rig or the 5,000′ of collapsed riser pipe on the seafloor around the Macondo well. As far as we know, no samples were collected from the much more extensive patch of slicks observed on August 30.  Tropical Storm Lee blew in and knocked everyone out of the Gulf soon thereafter.

We would be able to observe those slicks on satellite imagery, just like we repeatedly observe slicks from active natural oil seeps throughout much of the Gulf.  Radar imagery is the go-to tool for the job.  A radar image taken on August 30 showed a patch of slick matching the area and description given by Bonny Schumaker when she flew over that site earlier in the day; an image taken a few days earlier, on August 26, showed nothing interesting in the vicinity.

We’ve got a couple more recent images to look at.  This one shot on September 11 shows a lot of slicks in the area – a very complicated pattern typical of low-wind conditions (about 2 m/s), where dark, swirly patterns of natural surfactants usually present on the ocean surface are mingled with slicks from natural oil seeps and those possibly caused by oil leaks and spills, making it difficult to draw any firm conclusions (although note the slick apparently emanating from the location marked 23051, where we’ve documented a chronic leak from hurricane-damaged wells and routinely observe similar slicks) :

Here’s the exact same area as it looked on another Envisat ASAR radar image shot at about 1pm local time yesterday under good conditions (wind blowing from the northwest at 4 m/s). We see a slick once again associated with the 23051 site, a few small slicks west and southwest of the Macondo well location that are very closely associated with known natural seep locations, and a variety of larger slicks in Breton Sound where we routinely see reports of leaks and spills from offshore oil facilities (and so can you, if you subscribe to SkyTruth Alerts):

The upshot: we’re not yet seeing a trend that would support the idea that oil is working its way up from the Macondo reservoir and turbocharging the existing natural seeps in the area, or forming new sites of chronic leakage.  But we don’t have enough imagery yet to say for certain it isn’t happening.  All we can do is keep looking, and compare what we’re seeing now with images of this area from before the BP / Deepwater Horizon spill began last April.  We’re working now on getting those historical images so we can establish that pre-spill baseline. 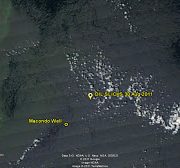 Back on September 2 somebody submitted a pollution report to the National Response Center indicating an oil spill in the Gulf of Mexico, and it popped up in the SkyTruth Alerts system.  That’s depressingly common – there are typically a dozen or so reports of spills every day in the Gulf.  And this one came from a familiar place, the site of a former oil platform (#23051) about 12 miles off the tip of the Mississippi Delta, in Mississippi Canyon Block 20.  We’ve been systematically documenting a chronic leak there since we first became aware of it last summer during the unrelated BP / Deepwater Horizon spill.

But the September 2 report is magical:  The caller – presumably an employee of or contractor for the company – claimed a spill totalling 0.0000027 gallons.  That’s 1/500th of a teaspoon.

Silvery sheen is at least 0.04 to 0.3 microns thick.  By our calculation, that’s a slick containing 0.2 to 15 gallons.  Sure, 2/10ths of a gallon isn’t much, but it is 74,000 times larger than the caller reported. Maybe this was a simple transcription error at the NRC.  But if not, this one gets the prize for ridiculousness, reinforcing our evolving theory that polluters are consistently underreporting the amounts of pollution. Cumulatively, given thousands of reported spills a year, these unreported amounts add up to a much bigger mess than the public has been lead to believe.  In a place like the western and central Gulf, maybe this is no big deal; but in new places where we’re moving ahead with drilling – the Virginia coast, the Arctic Ocean – the routine leaks and spills associated with coastal industrialization and offshore drilling might not be so easily shrugged off by tourists, fishermen, and the environment.

And by the way, we’re seeing a lot more than 5 gallons in the ongoing spill – 24/7/365 since September 2004 – from this hurricane-damaged cluster of wells.  The MODIS /Aqua satellite image below, taken on September 10, shows a slick originating at the 23051 site that extends almost 35 miles. And the radar satellite image at bottom, taken on August 30, shows a slick at the site that stretches about 13 miles. We’ve collected dozens of images showing slicks at this site routinely stretching more than 10miles.

We suspect that some of the oil slicks and occurrences of tarballs and other oil on the Louisiana coast are probably coming from this location, not from the BP / Deepwater Horizon site 40 miles offshore.  To help eliminate this possible source of confusion, scientists from National Wildlife Federation are taking a boat out today — guided by SkyTruth’s maps, coordinates, and image analysis — to collect a sample of the oil slick at the 23051 site.  We hope to get that sample chemically “fingerprinted.”  As always, we’ll report the results right here.