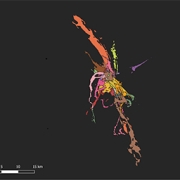 SkyTruth intern Kennedy Lawson follows the trail of an offshore oil slick with no clear link to vessels or infrastructure.

When I began my internship at SkyTruth, little did I know the challenges I would face—and the remarkable things I would discover. As a newbie, at first the tech-heavy work intimidated me; it was difficult to imagine how I would fit in.

That fear was quickly replaced with excitement. On my first day, I met the team and developed a better understanding of exactly how I would contribute to environmental change.

Within my first few days, internship program leader and Geospatial Analyst Brendan Jarrell introduced me to the work SkyTruth does to address global oil pollution, especially from offshore drilling, infrastructure, and bilge dumping. He gave me the assignment of analyzing Sentinel-1 radar images to monitor offshore oil activity. I had never worked with this type of satellite imagery and had to learn the telltale signs of oil slicks: Typically they appear as black streaks on radar images. When a streak leads to a bright white spot, that usually represents the source of the oil: a vessel or an offshore oil platform.

Armed with my new knowledge, I went on the hunt for oil, determined to protect the planet from harm. My mindset going in was: “You can look but I doubt you’ll find anything for a while. Spills are probably not happening that often.” To my surprise, spills are happening often, and the problem is much more severe than I had initially believed. It wasn’t long before I was spotting potential oil slicks while conducting my monitoring.

This monitoring work is essential at SkyTruth. We tie some of our observations to an artificial intelligence and machine learning program, Cerulean, which detects oil pollution at sea. Observations made by interns and other SkyTruth staff are cross-referenced with the findings of our artificial intelligence and other technology. This process helps us verify what we see, as well as the performance of the programs we have created.

In a satellite image from August 27, I observed a slick in the Persian Gulf that was different from anything I had previously seen. This slick stood out not only because it roughly spanned a whopping 36km, but also there was no clear source in the image to trace the majority of the oil back to. I knew that a ton of oil production takes place in the Persian Gulf, so there were two things I had to consider: One, could all of the oil be coming from a nearby platform? Two, was the source of the slick on the seafloor? The second option seemed more plausible because in my analysis I was unable to connect the oil to any specific platform. 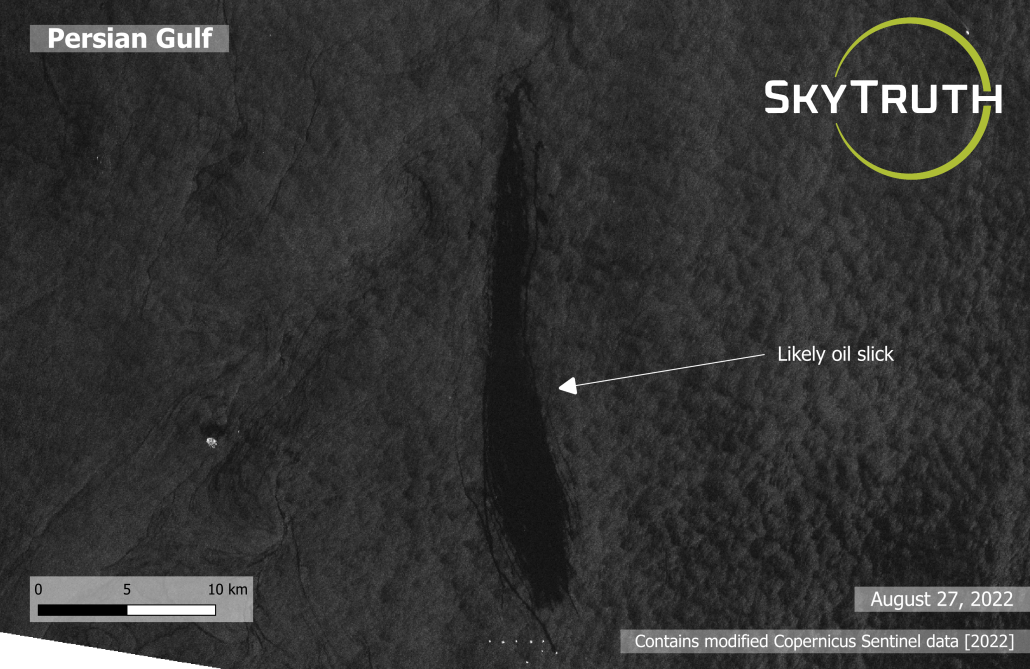 Sentinel-1 image of the slick observed on August 27, 2022 in the Persian Gulf.

This led to more questions. Was it possible that this was a natural oil seep? Was there a shipwreck in the area that would cause oil to continue to be observed? Was a leaking pipeline responsible?

Since pipeline infrastructure exists in that area, a pipeline leak seemed a reasonable cause. My fellow intern, Devin Thigpen, used georeferencing in his previous work, and he helped me by georeferencing an image of a pipeline map. This tied the internal coordinates of the map image to Earth’s geographic coordinates (essentially putting the image at the correct “ground” location)—an important step in confirming my hypothesis. (Read more about how Devin has applied georeferencing in his blog post.) After overlaying a polygon of the slick on top of Devin’s map, I found that they clearly aligned: The slick fell smack at a right angle in the pipeline; such a sharp turn at this spot could cause the pipeline to be more susceptible to experiencing leaks. 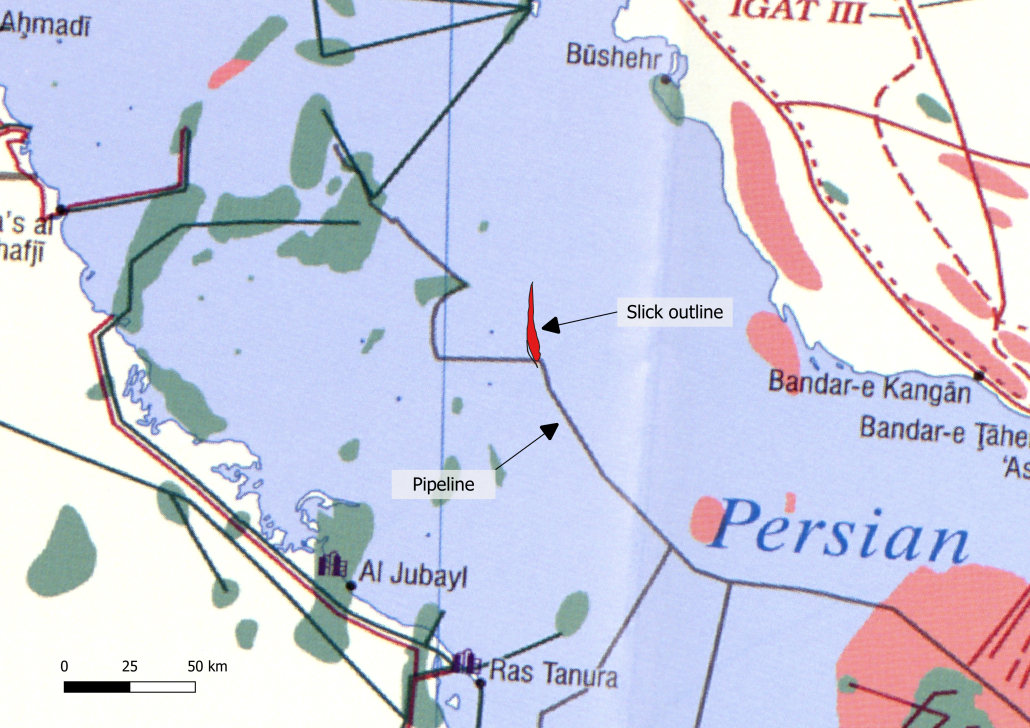 Slick outline overlaid on the georeferenced map of pipelines in the Persian Gulf. 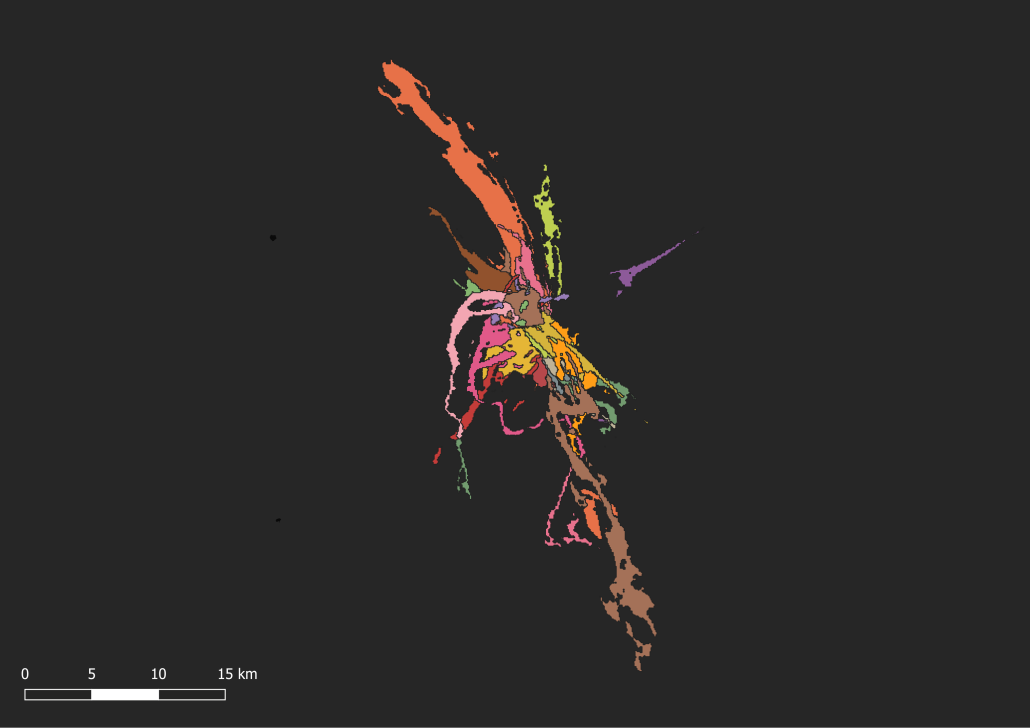 Cumulative oil spills detected by Cerulean at this location since August 2020.

Piecing all the clues together, I had strong reason to believe a leaking pipeline was the source of the slick. But those clues might have been mere red herrings.

Some natural oil seeps are in close proximity to offshore oil infrastructure like platforms and seafloor pipelines. As discussed, when Cerulean detected this large, persistent oil slick, we noticed it was close to—but did not exactly line up with—a cluster of oil platforms, appearing as a line of bright spots on the satellite image just beyond the south end of the slick. Although the oil slick closely aligned with the bend in the nearby pipeline, previous research had identified this as the location of a natural oil seep.

How to tell the difference? In this case, historical analysis can provide a clue. Again, we looked at years-old satellite images, this time as far back as 2014 (the year Sentinel-1 began operating), and saw the slick was present ever since. However, it did not seem to be growing larger. This went against the pipeline leak theory: If the leak was caused by damage or corrosion, we would expect it to get worse over time.

Following this additional analysis, we have reason to believe a natural seep may be the most likely explanation for this Persian Gulf oil slick. If we can uncover more details about the pipeline—such as its installation date—we might be able to draw a more definitive conclusion. For now, we can only speculate.

Seafloor Pipelines Under the Microscope

Leaks from oil pipelines on the seafloor remain a major concern worldwide, even if a natural seep is the likely culprit in this case. Global Energy Monitor estimates that the total length of seafloor pipelines is about 730,000 miles (over a million kilometers)—enough to circle the Earth 30 times. However, due to their location, many people take an “out of sight, out of mind” approach. Additionally, those who do want to monitor or inspect these structures face challenges accessing them physically or digitally. That’s where SkyTruth’s freely available remote sensing tools come into play.

It’s important to consider that most of these structures were placed in the sea many years ago. Oceans’ saltwater creates a harsh environment for metal pipelines to withstand the test of time, often leading to corrosion and an increased risk of failure. This makes it even more important to regularly and diligently inspect them. However, it’s difficult to depend on those contributing to the pollution to take responsibility for oil slicks, underlining the need for publicly available technology that can help hold them accountable. It’s not always a matter of intent: Sometimes, big companies that initially install these pipelines later sell them to smaller companies. Then, once the transaction is complete, the new owners may not be equipped with the same resources to maintain the pipelines.

Not all hope is lost. Recently, companies responsible for the 2021 Huntington Beach oil spill—where SkyTruth’s John Amos observed slicks near a pipeline—reached legal settlements in excess of $5 million. Johnna Armstrong discusses the steps SkyTruth took to investigate the spill in a different blog post.

SkyTruth has always emphasized the importance of using these powerful tools and being transparent in our findings. We’ve made it a priority to continue to monitor these issues as well as alert the public and government agencies when companies cause environmental harm. That sort of pressure just might lead to positive change.