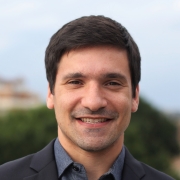 In July, SkyTruth added the latest in a flurry of new team members: Communications Director Joel Goldberg. For more than a decade, Joel has worked on translating complex scientific information into engaging, public-facing content. His communications expertise crosses multiple domains, including outreach, events, writing and reporting, and multimedia production. He has served major scientific organizations, such the National Science Foundation and the American Association for the Advancement of Science, as well as written and produced content for major media outlets, among them Science, NPR, National Geographic, and Smithsonian Channel.

“We are thrilled that Joel is joining the team as SkyTruth’s new Communications Director. The primary goal of SkyTruth’s 5-year plan is to increase our impact for conservation, particularly focusing on the twin crises of climate change and biodiversity loss. Joel’s deep experience in science communications promises to bring SkyTruth’s work to new audiences, leading to greater and more effective use of SkyTruth data and products by citizen’s groups, researchers, advocates, industry leaders and forward-looking governments.”

Joel leads SkyTruth’s public information efforts, developing finely tuned content and communications strategies to grow SkyTruth’s presence within the conservation community—and beyond. He will collaborate with SkyTruth’s various teams to generate a cohesive narrative for the organization and its products, such as the upcoming flagship platform Cerulean. His work will ensure that all SkyTruth messaging, public engagement, and content embody the organization’s mission and spirit.

Joel is a native of greater Philadelphia, where he was raised on the doorstep of Valley Forge National Park. The dense forests and rolling hills of Pennsylvania inspired him, sparking his desire to preserve and protect the planet. He went on to attend George Washington University, where he earned a B.A. in psychology and minor in mass communications, eventually beginning his science communications career at the media school’s environmental nonprofit, Planet Forward. He now lives with his wife in Alexandria, Virginia, on the doorstep of Washington, D.C.

Persistence on the Path to Becoming a Master Coder

Don’t Call It a Retreat: SkyTruth’s Reunion Rejuvenated Me
Scroll to top