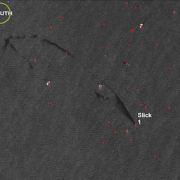 Nigeria is not only the largest economy in Africa, but also the largest exporter of crude oil on the continent, exporting 1.27 million barrels per day in 2021. The Nigerian economy is—and historically has been—reliant on the hydrocarbon industry for foreign exchange income and tax revenue. The reliance on crude oil in particular for income generation has led to the widespread proliferation of offshore drilling operations in the petroleum-rich Niger Delta Basin. Hydrocarbon giants, such as Shell, Chevron, and Exxon, maintain operations in the region through joint ventures with the Nigerian government. Domestic companies also contribute significantly to the share of offshore drilling operations in the region, especially in the upstream (unrefined) sector.

As an intern at SkyTruth, I monitor satellite imagery weekly to document oil spills in the oceans that can then be used to train Project Cerulean, an oil slick detection algorithm. The workflow involves scanning Sentinel-1 (S1) Synthetic Aperture Radar (SAR) imagery for visible signs of oil slicks. SAR imagery is incredibly useful for this purpose because of its ability to penetrate clouds—attributed to its long wavelength—a very handy characteristic to have when observing locations in the often cloudy tropics. Additionally, the 6-day temporal resolution allows for timely acquisition of images of an area on a weekly basis. In a type of SAR imagery known as vertical polarization emitted and received (VV), clean water appears rough and relatively bright on a radar image due to surface scattering of radar pulses off the small wind-driven wavelets that commonly occur at sea. Compared to surrounding clean water, oil slicks appear much smoother and darker because oil impedes the formation of these small wavelets.

In early June, I spotted two characteristic dark, smooth, narrow, wedge-shaped oil slicks in the Niger Delta, just off of the coast of Bayelsa State, Nigeria. Both slicks were visible in a S1 image from June 3rd, 2022, but oriented in opposite directions (see Fig. 1). A cause of this phenomenon could be explained by the prevalence of the Guinea current (or a localized one) off the coast having a greater effect on the second slick further offshore than wind. Both slick sources registered as permanent infrastructure in SkyTruth’s offshore infrastructure dataset, suggesting that they are likely structures related to oil production (see red dots in Fig. 1). 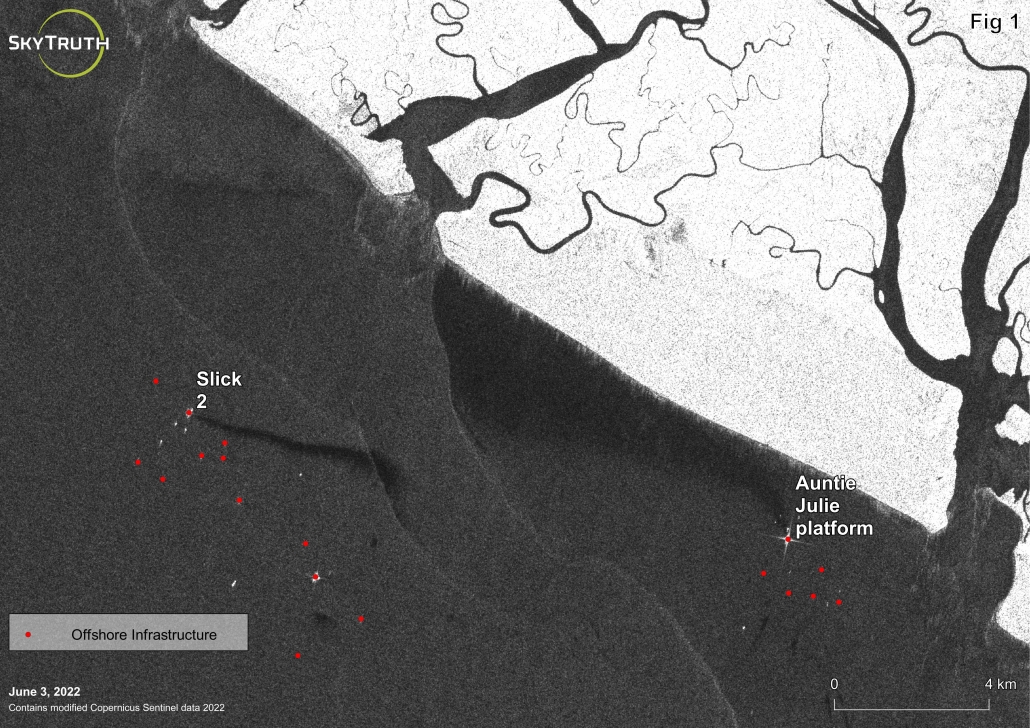 Next, I began the process of narrowing down potential sources of these two slicks. Using the coordinates of the origin of each slick, I was able to view origin locations using Planet Labs’ daily satellite imagery and Google Earth’s relatively high-resolution historical color imagery. This gave me a closer look at both points, which helped me determine the #2 slick point of origin to be some kind of offshore drilling support infrastructure (see Fig. 2). The other slick point of origin on the right side of the map appeared to be a relatively large offshore drilling platform and perfectly matched the slick origin coordinates. I confirmed the identity of this platform by first stumbling upon an image of the Aunty (Auntie) Julie platform owned by ConOil after researching the Funiwa field in which it was located. The image then led me to a blog covering a previous spill that had also been detected at the same platform using S1 imagery that matched the location and visual identification (see Fig. 3). The Aunty Julie platform is no stranger to oil spills caused by lack of maintenance and oversight and has previously been scrutinized for environmental incidents such as leaks in the past. 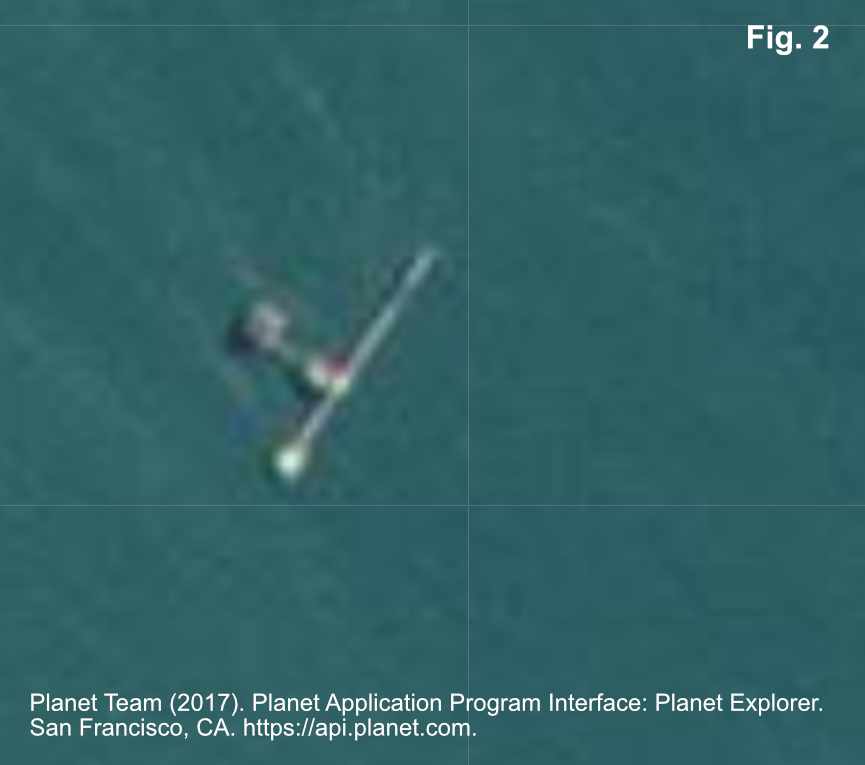 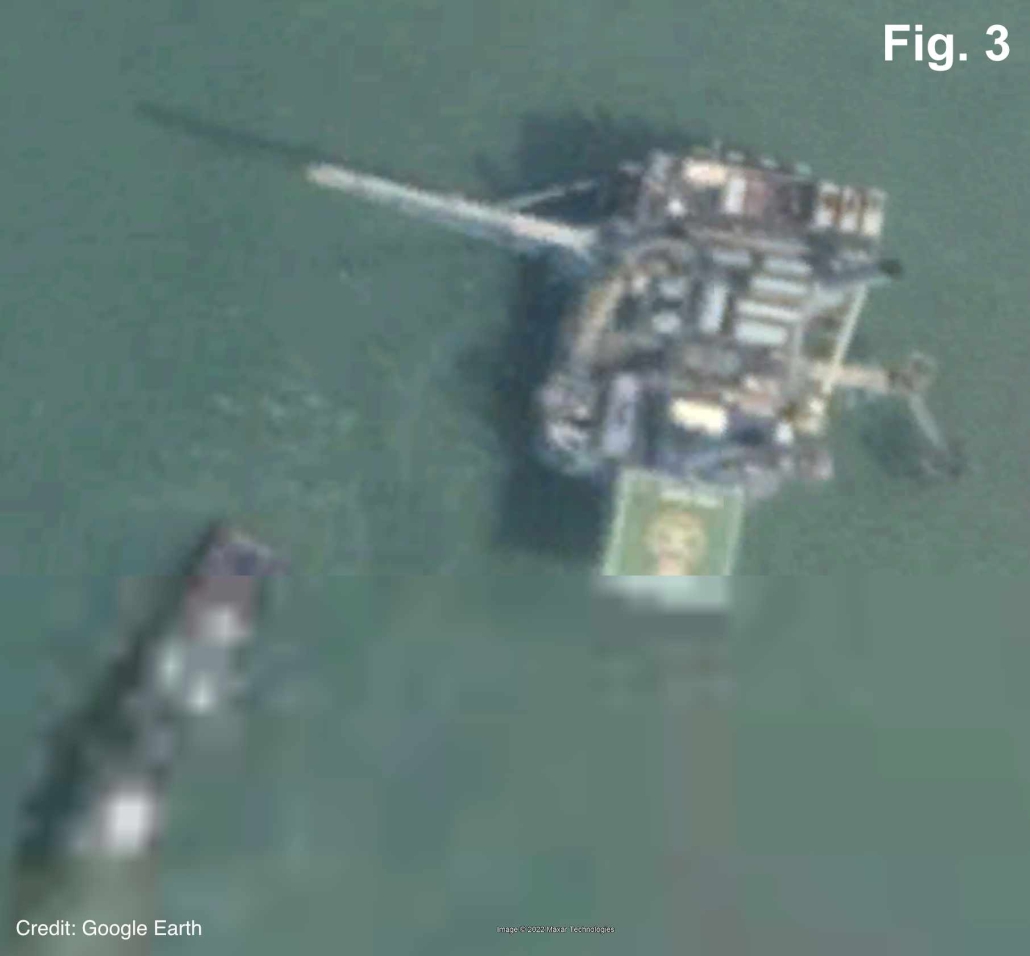 Now, armed with an oil mining license map obtained from the same blog, I began to confirm the source of the #2 slick origin. I then noted that the boundary of block OML 86, owned by Chevron, visually corresponded to the source. The map also indicated that the Aunty Julie platform was located in block OML 59, owned by ConOil. The lack of permanent stationary structures around the origin of the #2 slick in historical imagery suggests that it is likely the culprit of the trailing slick.

Then, I turned to the final “smoking gun” method of confirming the sources of these two slicks. I overlaid a georeferenced image of the aforementioned oil mining license map on the S1 image, which allowed me to match the respective origin sites to their owners. In order to align the license image with the S1 image, I made a series of control points to properly scale the image—essentially getting them to “line up.” Ultimately, I used photo editing software to add the appropriate parallels and meridians, which allowed me to place my control points on the license map. Additionally, I matched the base S1 image projection to the mining license map, ensuring they aligned. Once completed, I had a relatively precise overlay of the mining blocks over their boundaries as well as a rough—yet still relatively precise—shoreline that validated the georeference. Looking at Fig. 4, the two slicks are both clearly visible under the translucent oil mining license blocks within their respective boundaries. Slick #2 falls exactly into the North APOI field operated by Chevron, while the Aunty Julie platform is placed in the center of ConOil’s extension of the Funiwa field just east of the main Funiwa cluster (see Fig. 4). 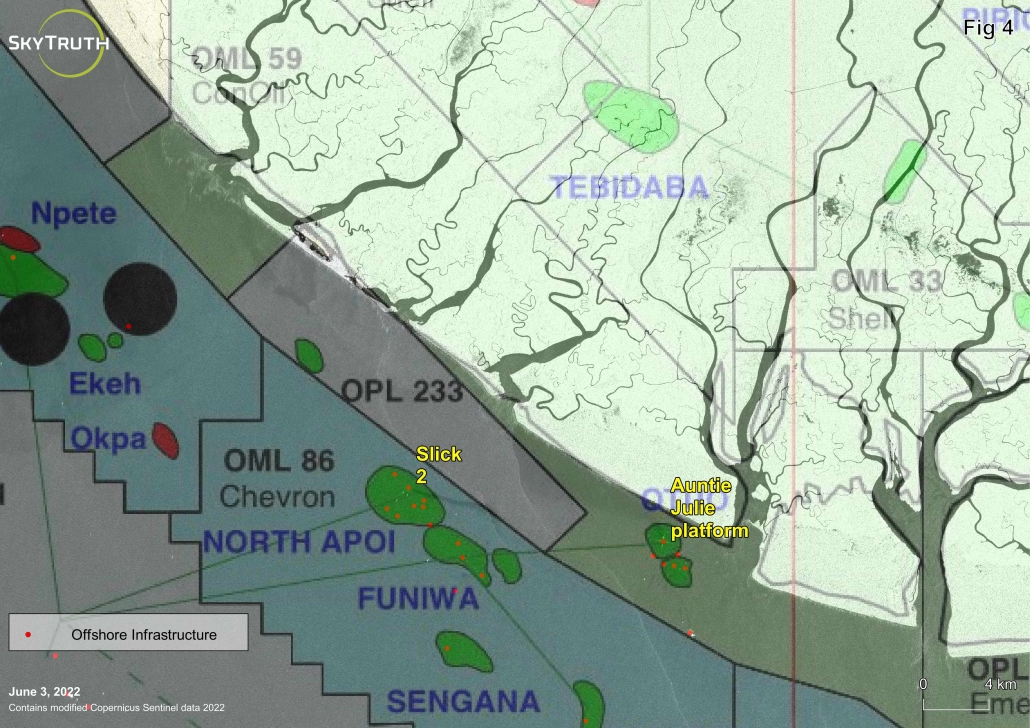 I also observed another spill from June 3, around 260 km to the west in the Rio Del Rey Basin of Cameroon. The spill was located 37 km off the coast of the Southwest province of Cameroon (a much smaller producer of crude than Nigeria). Normally one of the continent’s middling oil producers, Cameroon has exhausted much of its offshore deposits of crude within its smaller exclusive economic zone. Despite these circumstances, upstream production of petroleum continues to remain a significant part of the economy.

Again, this spill appeared smooth, dark, narrow, and wedge-shaped—in contrast to the rough water surface—measuring just over 5 km long (see Fig. 5). Additionally, the offshore infrastructure points match the various structures in the image quite well, including the slick source in question, confirming the stationary nature of many of these structures (see red dots on Fig. 5). 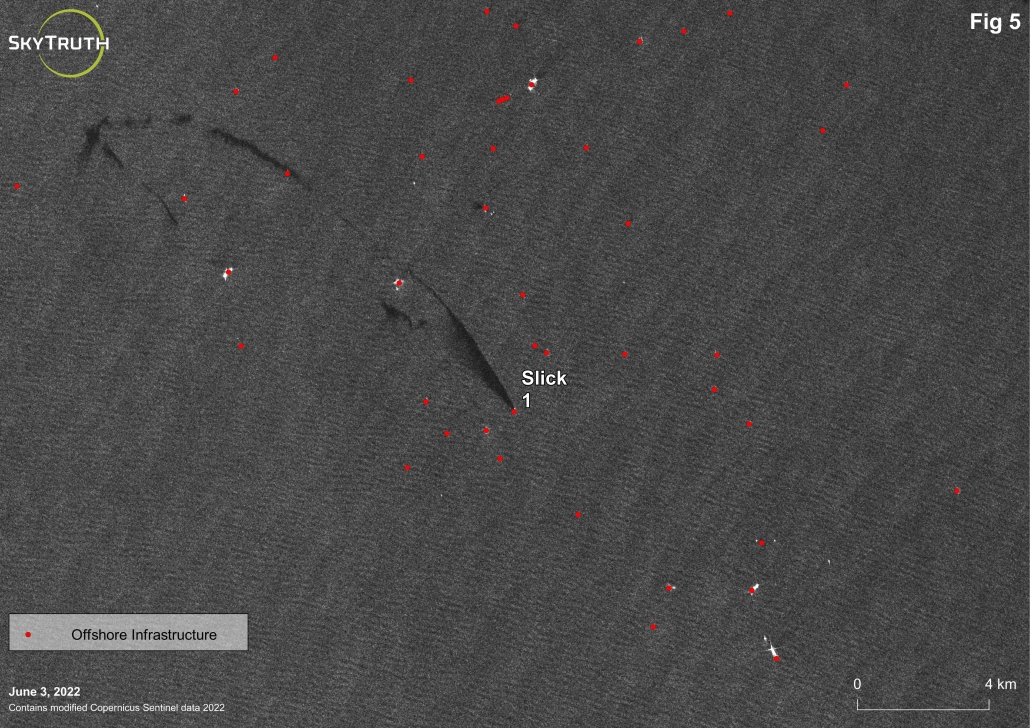 To identify the source of this slick I used the same method of overlaying a georeferenced map (Pg. 17) of oil license blocks of Cameroon above the S1 image the slick appeared on. This time I did much more easily, as the map included graticules (parallels & meridians). The graticules sped up the process of establishing control points to match to the S1 images, since they would not have to be manually created. It should again be noted that the projection of the S1 image was first matched to that of the license map. After applying the translucent license map overlay to the S1 image, the slick origin was placed squarely within the Mokoko Abana Field, which is licensed to Addax Petroleum (see Fig. 6). 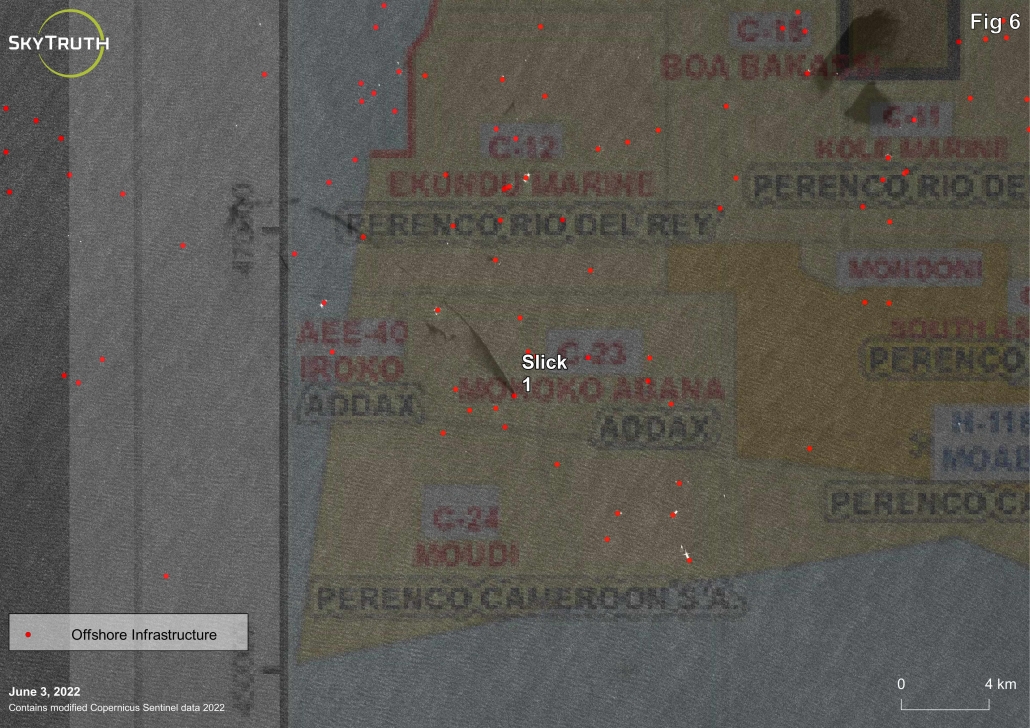 Upon getting a closer look at the site using Planet Labs’ daily imagery over a period of multiple months, the structure appeared to be an oil platform and stationary ship to its northeast (likely a floating production storage and offloading ship [FPSO]) (see Fig. 7). I haven’t tracked down a name for this platform, but in form it closely resembles jackup rigs, such as the Hakuryu-14. The platform contains V-shaped sets of accommodation buildings centered around a raised helicopter pad, and the typical triangular platform shape characteristic of these rigs. The peninsular northwest end of the platform could be a cantilever drilling platform jutting out from the main hull, allowing for drilling to occur adjacent to the main platform. 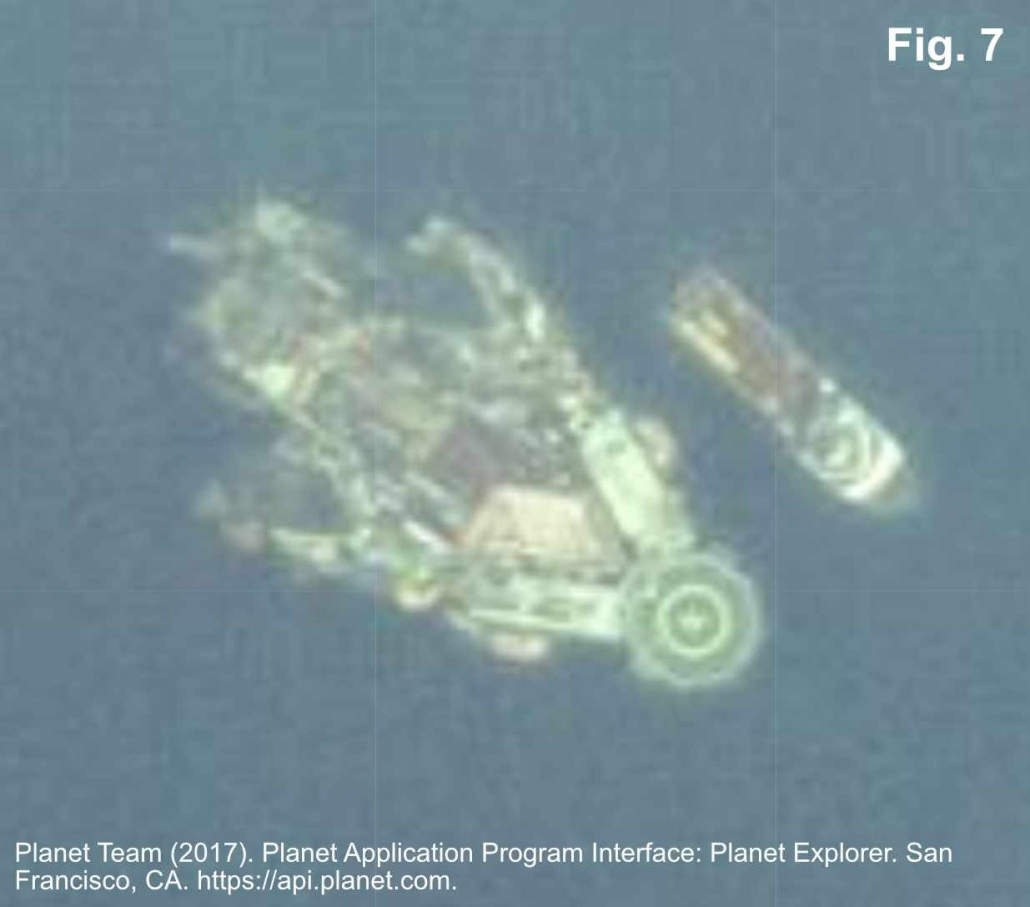 These events—visible from space—show only a small fragment of the tremendous spatial scale of the many environmental incidents plaguing the oil rich regions of West Africa. Despite having abundant access to rich deposits of hydrocarbons, the low development statuses of countries in the region have contributed to widespread corruption and mismanagement. This subsequently leads to theft, violence, piracy, and environmental degradation. Caught between these forces, local populations are left to shoulder the impacts of these spills. Many of these communities rely on fishing as a primary source of subsistence, but the environmental fallout from the continuous cycle of mismanagement has pushed them further into poverty.

Poverty itself remains a large driver of instability in the region. As large, multinational oil companies extract hydrocarbons from the region, local ethnic groups have not shared in the economic prosperity enjoyed by the large multinational companies.

Don’t Call It a Retreat: SkyTruth’s Reunion Rejuvenated Me