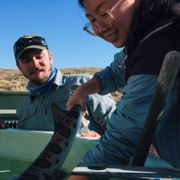 My name is Breanna Xiong! I like to describe myself as a somewhat typical first-generation American college graduate. I’m Hmong-American, born to war-refugee-rice-farming parents, and was raised in California’s Central Valley. At sixteen years old, I visited Point Lobos and heard the sound of waves crashing for the very first time in my life. Growing up, I did not always have the resources to visit nature reserves and parks. Being at Point Lobos was the first time I had ever been fully immersed in nature – I was in complete awe. Despite not knowing much about nature or science, the seventeen-year-old me held the sound of those roaring waves close to my heart and enrolled in Wildlife, Fish, and Conservation Biology studies at the University of California, Davis. 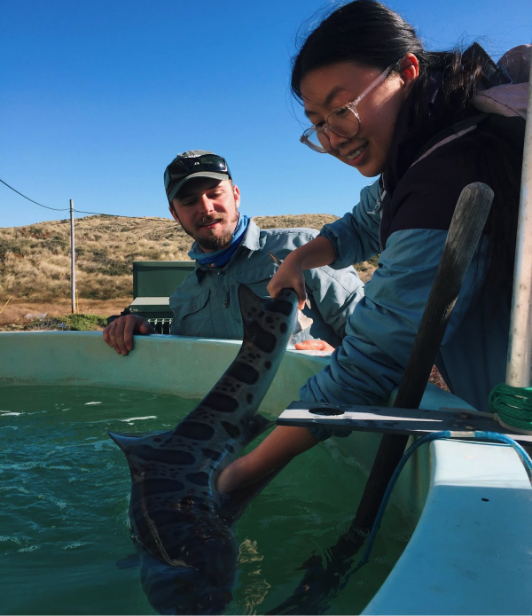 Just outside of the Bodega Marine Laboratory, I strugglingly lift the beautiful leopard shark affectionately named ‘Chester’. (Chester was caught the previous day by fish biologists and was released back into the bay soon after.)

Admittedly, I wasn’t the sharpest tool in the shed nor did I have a plethora of computational experience. In fact, I spent most of my undergraduate experience studying ecology/sustainability. It wasn’t until my last year in college that I started learning about GIS and programming. When I emailed Brendan Jarrell, SkyTruth’s Geospatial Analyst and Internship Program Coordinator, I was quite ready to receive a ‘thank you for your interest, but we decided to move forward with other candidates at this time’ kind of response. Fortunately for me, that was not the case. My email of acceptance came and I began my time at SkyTruth.

The ball got rolling soon after my initial onboarding with Brendan. I was briefed on how SkyTruth monitored oil pollution at sea and was given some starter tips on Google Earth Engine (GEE) and QGIS. I had briefly worked with GEE in the past but was unfamiliar with QGIS. As an ArcGIS Pro user at the time, QGIS was definitely a hard adjustment. But after a few months of working with QGIS, I had a much better understanding and relationship with the software.

With the help of Christian Thomas, SkyTruth’s Geospatial Engineer, I created a dataset that identified the likelihood of an offshore structure’s association with oil production, and subsequently, its risk of polluting its surrounding waters. To do this, I identified which points from SkyTruth/Global Fishing Watch’s offshore infrastructure dataset intersected with other oil-indicating datasets. Although the project is conceptually simple, the details took some time to finetune and flesh out. Overall, this project really helped me become comfortable using QGIS. Hopefully, future skytruthers can add more datasets to this analysis and see improvements in identifying oil platforms/rigs out at sea.

The second project I took on was the Surface Mining Expansion (SME) project with Christian Thomas. The SME project is preceded by work that Christian did with mapping the yearly extent of surface coal mining in Central Appalachia. Our goal was to expand this precedent analysis to other regions in Appalachia and ultimately, all U.S counties with coal mining activity. This project is ongoing, so be on the lookout for those results in the near future.

Read more about the Surface Mining Expansion project written by my co-intern, Jonathan.

Although I am honored to have worked on two long-term projects, my short-term projects and tasks are also near and dear to me. These short-term projects and tasks required me to learn a variety of skills. For example, I performed an analysis of Trinidad and Tobago’s cumulative oil pollution, as well as cumulative oil spill reports on the Bay of Campeche, and the North Sea. After uneventful internet sleuthing, I used QGIS to help Dan Cogswell, SkyTruth’s Software Developer, identify the values of varying color categories in the WDPA dataset. These results now sit in SkyTruth Alerts under the World Database of Protected Areas legend. I also helped compile coordinates of Floating Production, Storage and Offloading vessels (FPSOs) with SkyTruth’s machine learning specialist, Jona Raphael. Lastly, I helped organize a list of geospatial resources curated by SkyTruth team members. This was actually a very helpful task for me as well because I learned about many different geospatial projects and organizations in the process. I look forward to seeing how SkyTruth will utilize these datasets in the future!

I’d personally estimate, eight out of ten times, unnatural oil slicks coming from the GOM and T&T will be from an offshore oil platform or rig within an oil field. Chronic oil pollution is prevalent in T&T and in parts of the GOM, specifically the Bay of Campeche and off the coast of Louisiana.

Monitoring the GOM can be quite tricky sometimes. Leaks and spills in the Bay of Campeche (southern GOM) are typically a lot larger than those you would see near Louisiana. Because of this, the Bay of Campeche oil slicks are easier to see at lower image resolution. However, that is not the case for the U.S. There are a handful of offshore structures along the Louisiana coast that often leak oil but you have to zoom in quite close to see them because they’re smaller than those in the Bay of Campeche. When you complicate the satellite image with natural oil seepage and noise from weather events, spills along the U.S Gulf Coast can be easy to miss if you are not paying close attention (I am guilty as charged). I found it helpful to use SkyTruth’s Alerts tool in tandem with the GEE monitoring app when looking for oil leaks in U.S waters. Being able to overlay National Response Center reports and satellite imagery can be very helpful with oil leak confirmation and identifying oil platforms. 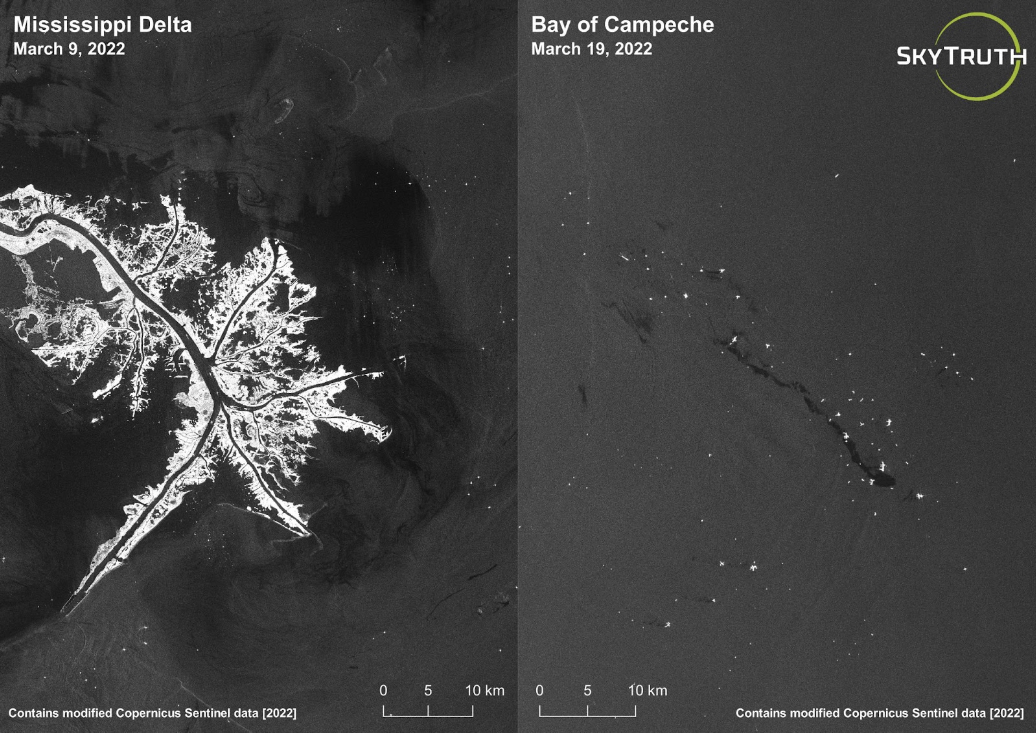 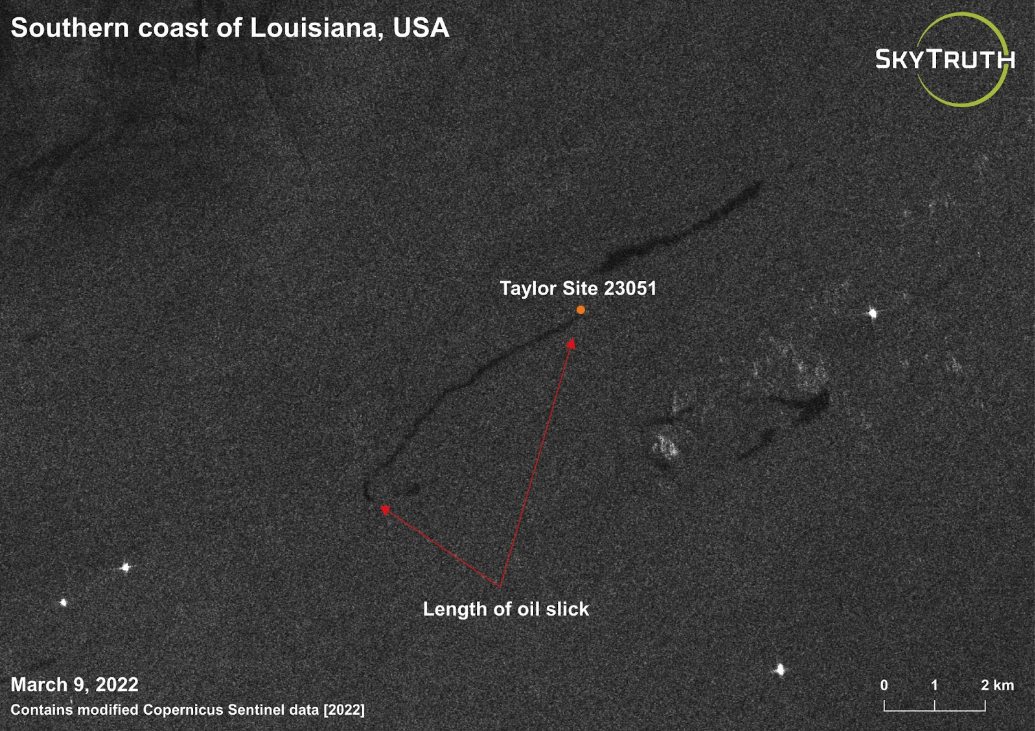 When zoomed in to the southeast corner of the Mississippi Delta image from above, you can see the oil slick is much more apparent here.

I have many fond memories of SkyTruth for several reasons. I really enjoyed learning new software. I felt myself becoming more comfortable and bold enough to start playing around with different tools/datasets that had previously intimidated me. How to approach, organize, and interact with data are invaluable lessons that SkyTruth staff, specialists, and analysts taught me. These lessons will genuinely stay with me throughout my future career.

There were many moments where I doubted myself but there was always a SkyTruther out there that lent an ear, gave me advice and encouragement, or empathized with me. Thank you to the SkyTruth staff and my fellow interns for all the emotional and technical support. This internship has been such a pleasure and I’ve been blessed with all of your kindness. As they say, “there is no never-ending feast, even if you are all reluctant to part from each other.” I truly hope that wherever we all are in the future, we can feast together about the great works that are to come. Cheers!

Oil Pollution from Commercial Shipping is a Big Problem, and Getting Bigger
Scroll to top