Oil Pollution from Commercial Shipping is a Big Problem, and Getting Bigger

NASA Earth Observatory image modified by SkyTruth
Blog - Latest News
You are here: Home1 / General2 / Oil Pollution from Commercial Shipping is a Big Problem, and Getting B... 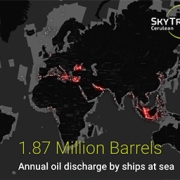 Cerulean is the tool we’re building to stop it

Late last week a group of researchers led by Dr. Yanzhu Dong — including SkyTruth’s Science Advisor, Dr. Ian MacDonald — published a major new study in the prestigious journal Science with a disturbing conclusion: commercial shipping is a major source of chronic, day-to-day oil pollution in our ocean, and pollution from shipping is rapidly getting worse. Tens of thousands of massive cargo ships and tankers crisscross the oceans every day. Far too many of these vessels leave long, oily slicks in their wake, a telltale sign of the discharge of untreated oily wastewater directly into the sea. This practice has been banned under international law since the early 1970s, yet it has continued essentially undetected and unchecked for decades. And as globalization has driven an explosion in the volume of commercial shipping, the volume of oil pollution has skyrocketed.

That’s why SkyTruth is building Cerulean: a free, public, global, AI-powered tool using satellite images and data to automatically and continuously detect oil pollution at sea from ships, oil platforms, and other sources. Cerulean sends out immediate notifications to anyone who wants a near real-time alert. And, in many cases, Cerulean identifies who is responsible for the pollution. Cerulean has been operating continuously since August 2020, using a machine-learning model to scan radar satellite images for oily slicks associated with vessels. Over the first twelve months of operation Cerulean handled over 500,000 satellite images and detected thousands of slicks. By extrapolating from these initial results, we’ve estimated that every year commercial shipping dumps nearly 80 million gallons of oil into the ocean. And while Cerulean is detecting slicks throughout the ocean, including in the waters of North America, the bulk of this pollution is concentrated in a handful of hotspots including the eastern Mediterranean Sea, Black Sea, Persian Gulf, and Java Sea. 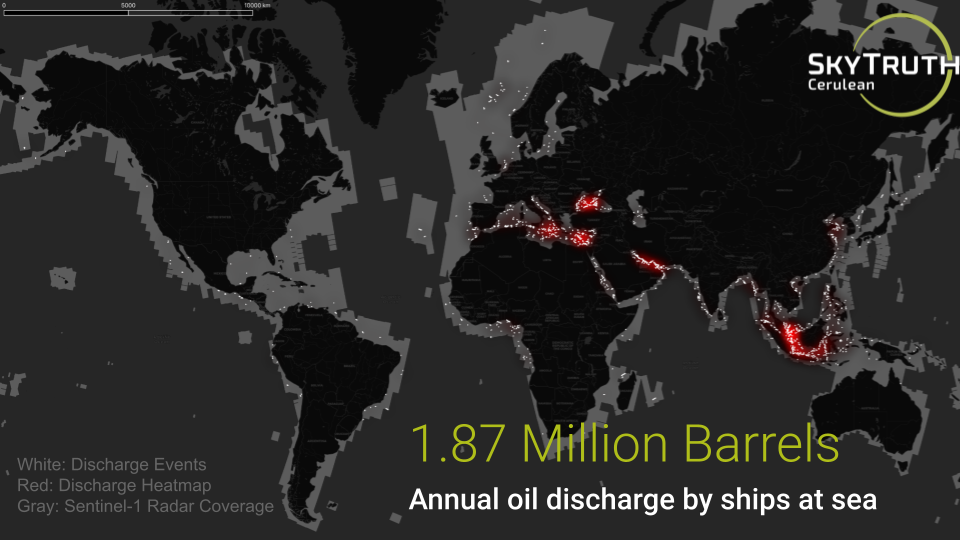 But shipping is not the only human cause of chronic oil pollution in the ocean. Leaks from offshore oil platforms, pipelines, and associated facilities and operations are also part of this problem. The Science researchers found that, with the exception of catastrophic spills like the BP / Deepwater Horizon disaster in 2010, oil platforms and pipelines are a relatively small source of chronic oil pollution compared with shipping. But ongoing leaks, like the Taylor Energy site in the US Gulf of Mexico that has been oozing oil since 2004, can have significant local impact. And with 30% of the world’s oil reserves located under the seafloor, thousands of new offshore wells and structures could be built in coming years, adding to the chronic pollution load and further stressing marine ecosystems that are already reeling under this impacts of overfishing, ocean warming, ocean acidification, and other stressors. That’s why we’re currently re-training Cerulean to recognize and detect oil slicks from offshore platforms as well as vessels. 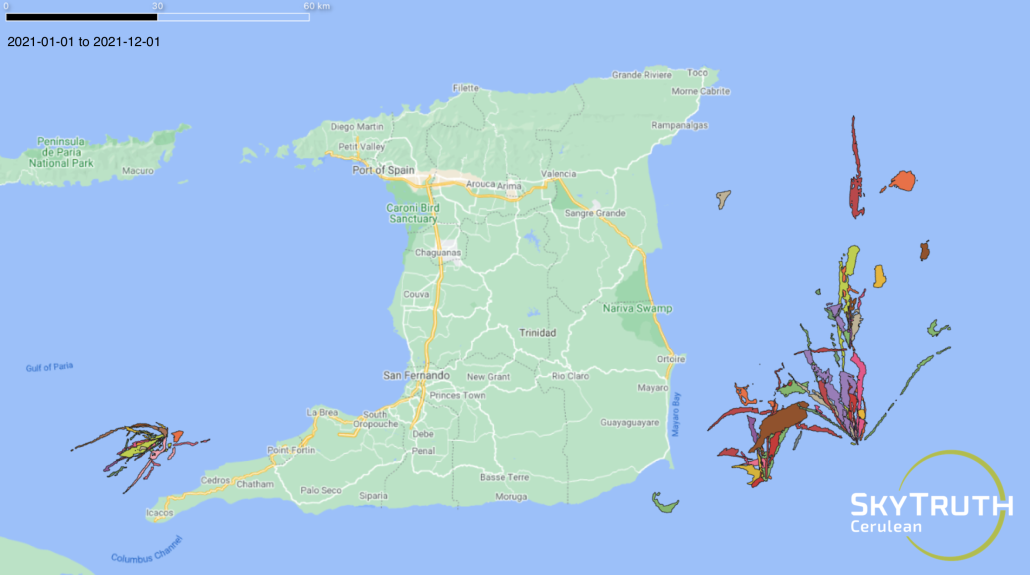 Cerulean 12-month results showing slicks associated with four offshore oil platforms in the waters of Trinidad and Tobago. We estimate these platforms are contributing up to 260,000 gallons every year to the chronic oil pollution problem in this area.

Cerulean is already having a positive impact: raising public awareness about the previously hidden and ignored problem of chronic oil pollution in the ocean, ratcheting up pressure on governments and corporations to take effective action to stop this pollution, and demonstrating that this problem can now be detected and measured — and polluters tracked down and brought to account. Our work with a team of investigative journalists in the European Union resulted in a recent report illuminating unchecked oil pollution in European waters, generating international media coverage. We’re collaborating now with another team of reporters looking into chronic pollution associated with offshore oil development. 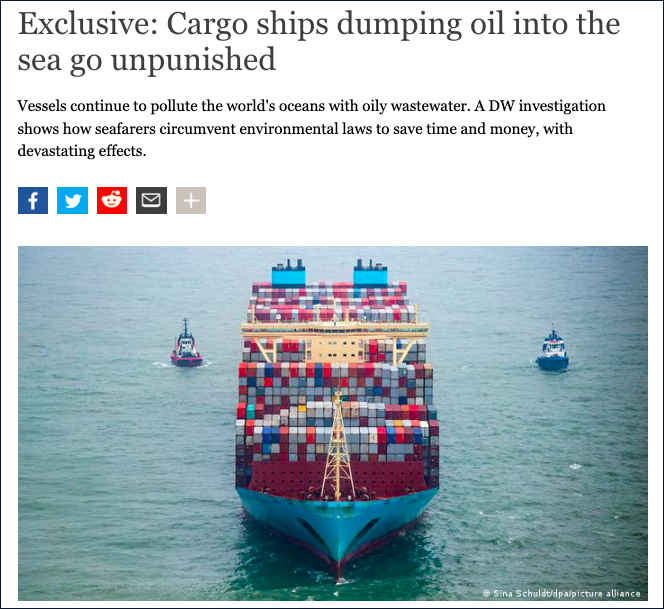 One example of the media coverage resulting from Cerulean’s use by EU journalists.

We’re growing the team at SkyTruth to scale up Cerulean to fully operational status on the Google Cloud Platform, starting with the addition of Dr. Jason Schatz as our Chief Technology Officer and Mitchelle De Leon as Director of Impact and Strategic Partnerships. And we are seeking input from prospective supporters, partners, and users of Cerulean to help shape the development of this pollution-busting tool so it can be an even more effective force for cleaning up our vital ocean.

The rapid growth of ocean industrial activities, occurring with a lack of publicly accessible satellite surveillance of our ocean, will inevitably lead to increased impacts to marine ecosystems, coastal communities, and the climate — particularly from the destructive immediate and long-term impacts of marine oil pollution. By building Cerulean, SkyTruth is exposing the growing industrial footprint on our ocean and turbocharging the work of advocates, governments, researchers, journalists, and other actors to protect ocean ecosystems and coastal communities and to amplify action on the climate crisis.

The Chaotic Memoir of Breanna, a SkyTruth Intern