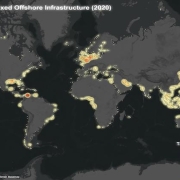 Do you know what’s in the ocean? Most people might say whales, octopus, sea stars, and other marine creatures. But after interning with SkyTruth, I am adding platforms, pipelines, and other offshore infrastructure. Imagine, just a few miles off the coast, thousands of human-made structures protruding from the ocean surface. And some of those structures release pollution.

At SkyTruth, we are used to seeing the ocean from this point of view. For example, our project Cerulean automatically detects oil pollution at sea from vessels by using artificial intelligence to detect oil pollution patterns. Our incident response and monitoring teams also analyze satellite imagery visually to examine ocean oil pollution events every week. Regardless of the technique we use, one question we always ask is “who did it?”

Although anyone can go to Google Maps and find most buildings in the world, we can’t do the same for infrastructure at sea. Depending on the country, this information is either stored behind paywalls, requires government permission, or is completely unavailable to the public. Because of this, we don’t have a complete picture of what structures in the world’s oceans are related to oil nor can we determine which are polluting out at sea. As a result, many companies and governments responsible for pollution are not held accountable. When you consider the importance of ocean health and the many people, natural processes, and wildlife that depend on the oceans, such invisibility is unacceptable.

SkyTruth and our partners at Global Fishing Watch were inspired by this problem and created a dataset that allows us to locate offshore infrastructure. 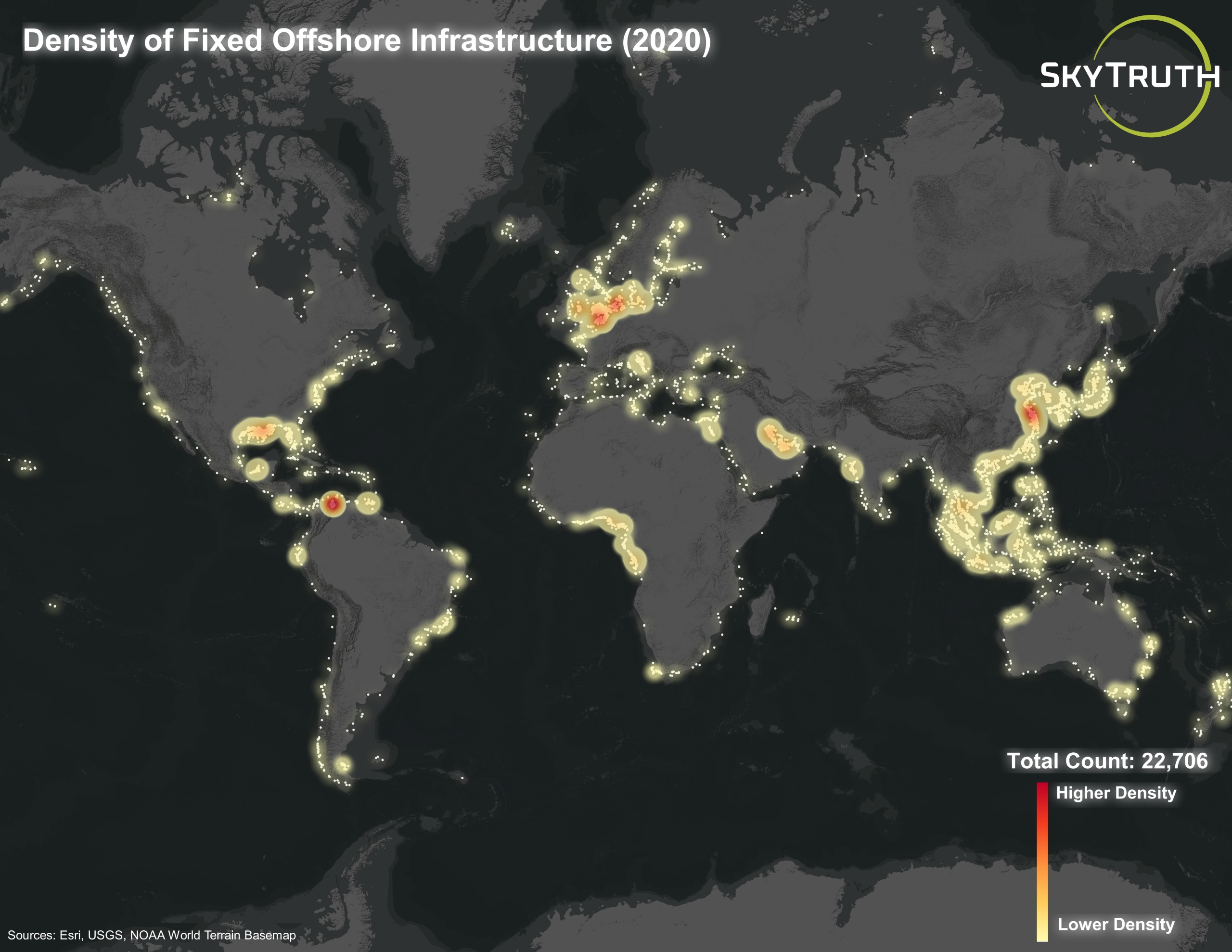 Now that we have this awesome map showing us the locations of structures at sea, we can work on identifying which individual structures are associated with oil and gas production. By combining several criteria and seeing where they match on a map, we can identify structures that have a high, medium, or low likelihood of being related to oil and gas production. This can make monitoring for oil pollution and identifying sources more efficient.

The three criteria we use to determine whether an offshore structure is associated with oil and gas production are:

With much technical and emotional support from SkyTruth’s Geospatial Engineer, Christian Thomas, I got to work creating an oil and gas infrastructure score for locations identified on the Global Fishing Watch – SkyTruth offshore infrastructure map. I used the geographic information system platform QGIS to apply all the criteria to the datasets to determine the likelihood that locations with infrastructure on the ocean were associated with oil and gas. 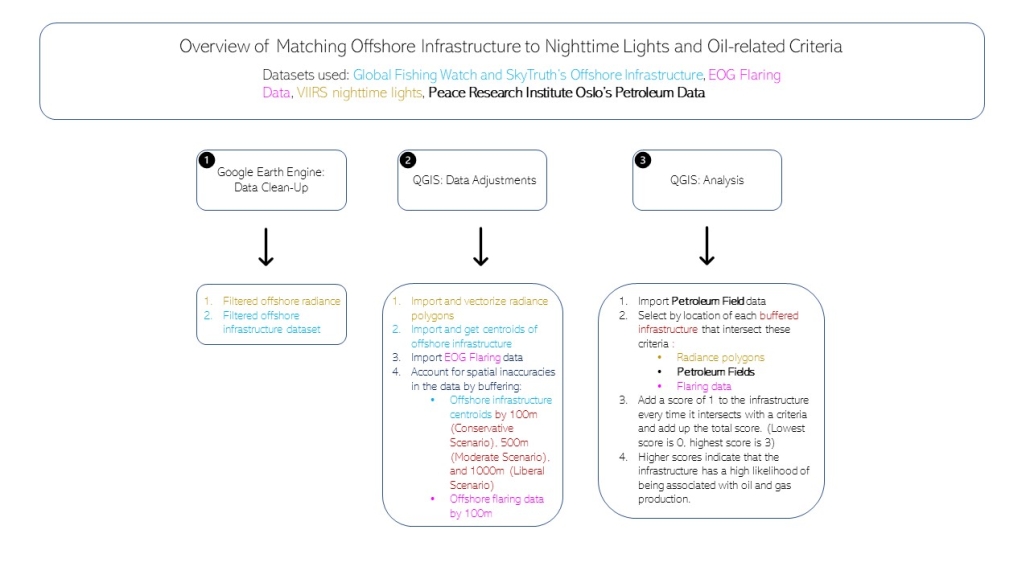 The flow of cleaning, adjusting, and analyzing the different datasets. The datasets are color-coded to illustrate how the data was processed at each step.

Along with importing the products from Part 1 into QGIS, we imported EOG’s flaring dataset and buffered the dataset by 100 meters to account for spatial inaccuracies in or between the datasets. We also buffered the offshore infrastructure to create three scenarios of varying distances:

Using QGIS, we created an oil and gas infrastructure score for each of the three distance scenarios. If the structure is located within a known oil/gas field, it scores one point. If there is a light source from the VIIRS nighttime lights data within the given distance, it gets another point; and if there is a flaring source from the EOG flaring data within the given distance, it earns another point.  If a structure receives a score of three, it matches all three criteria, meaning it has a high likelihood of being related to gas and oil production. Sites with a score of two match two criteria and have a medium likelihood of being associated with oil and gas production. Infrastructure with a score of one matches one criterion and has a low likelihood of being associated with oil and gas production. (We also encountered scores of zero.  Those structures are not displayed on the map because they did not correspond with any of our energy datasets and were not relevant to our analysis.) 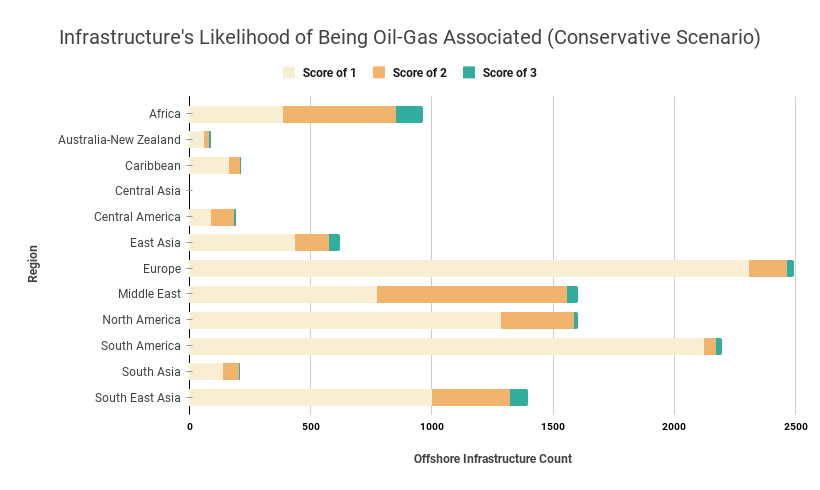 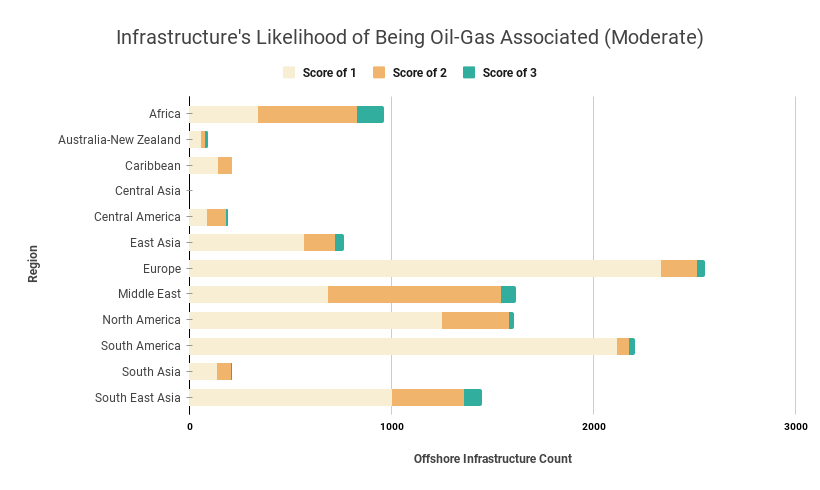 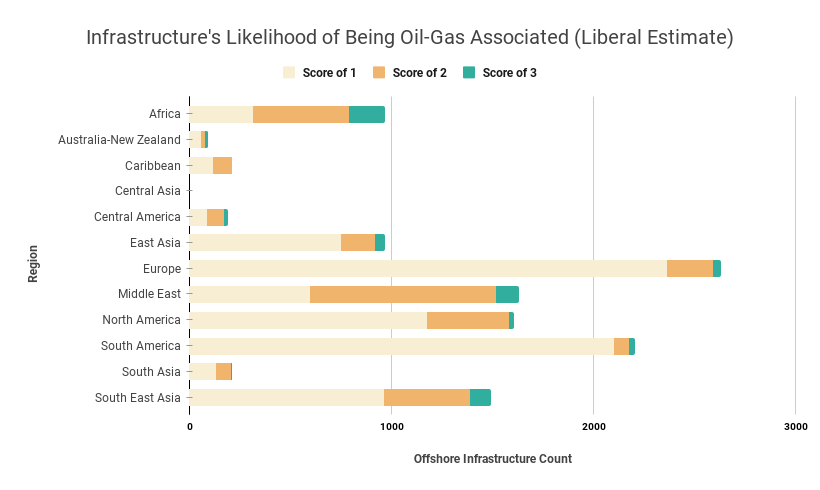 There are likely many more oil platforms in the world than these numbers suggest. Our 2020 offshore infrastructure dataset contains locations for 22,706 structures, including wind turbines. We know that there are a few thousand oil platforms in the Gulf of Mexico alone. Regulations in the U.S. restrict gas flaring, so most of those platforms score a two at best. And many oil platforms are smaller than we can consistently detect using satellite radar imagery. As spatial resolution of satellite imagery improves, we will be increasingly able to add these smaller structures to our offshore infrastructure dataset and increase our scoring accuracy as well.

We also looked at different types of structures at sea and their association with our oil and gas scenarios. It was helpful to apply our scoring system to other types of infrastructure to get an idea of how other they score in comparison. Let’s take a look at China’s offshore wind turbines – a leading country in offshore wind power. Across all scenarios, wind turbines near Donghai Bridge had a score of one and were unanimously associated with nighttime lights. Wind turbines typically have lights for aviation safety purposes, thus this finding was not unexpected. 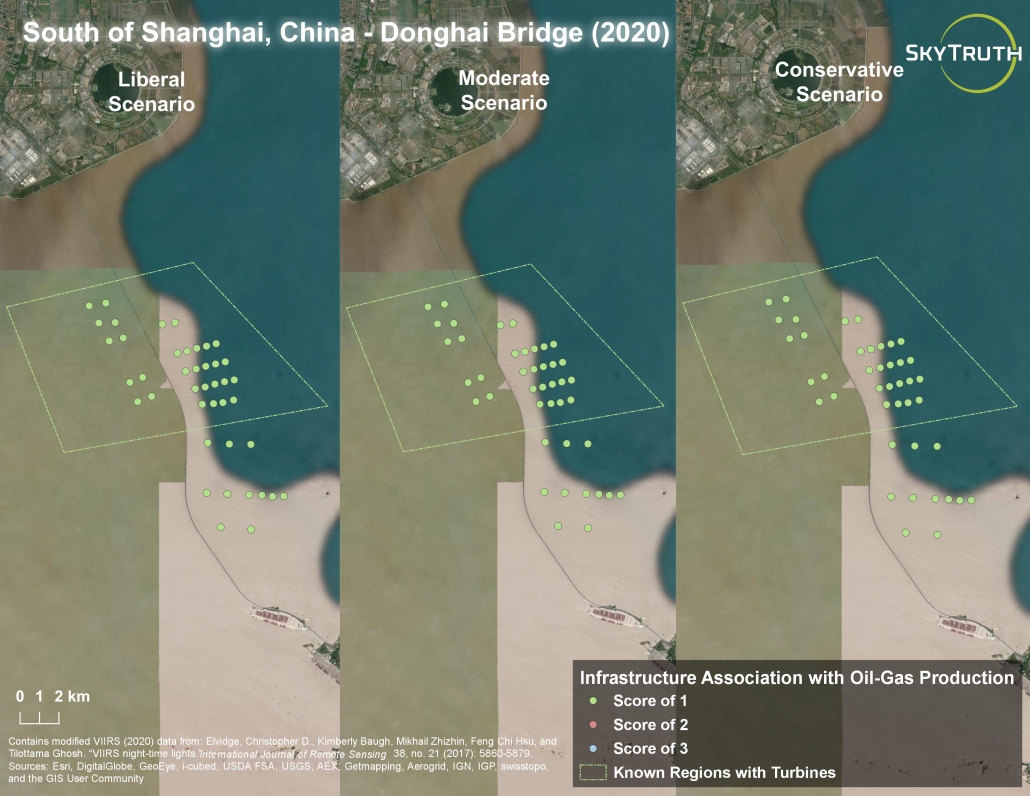 This image shows wind turbines near the Donghai Bridge. Our analysis gave the majority of turbines a score of 1 for oil and gas association. The results are identical for all three distance scenarios.

In comparison, let’s take a look at wind turbines off the coast of the United Kingdom – another leading country in offshore wind power. In contrast to the wind turbines in China, most of the wind turbines off this region of the UK also had a score of one but did not have nighttime lights. Instead, they were mainly associated with known oil fields. Of course, no analysis is perfect, hence in some cases we had some outliers match both oil fields and nighttime lights, earning a score of two.

When you look at these two countries, it’s clear that there is no cookie-cutter score for wind turbines. Different countries might have different policies on offshore wind turbines which could potentially contribute to the differences seen between these two countries. For example, the lack of nighttime lights detection in the United Kingdom could be due to their light pollution reduction policies. Thus, the best way to distinguish wind turbines and oil infrastructure in this case would be having a score of one or two and including a new criterion that considers known regions of offshore wind turbines — information we did not have for this analysis. 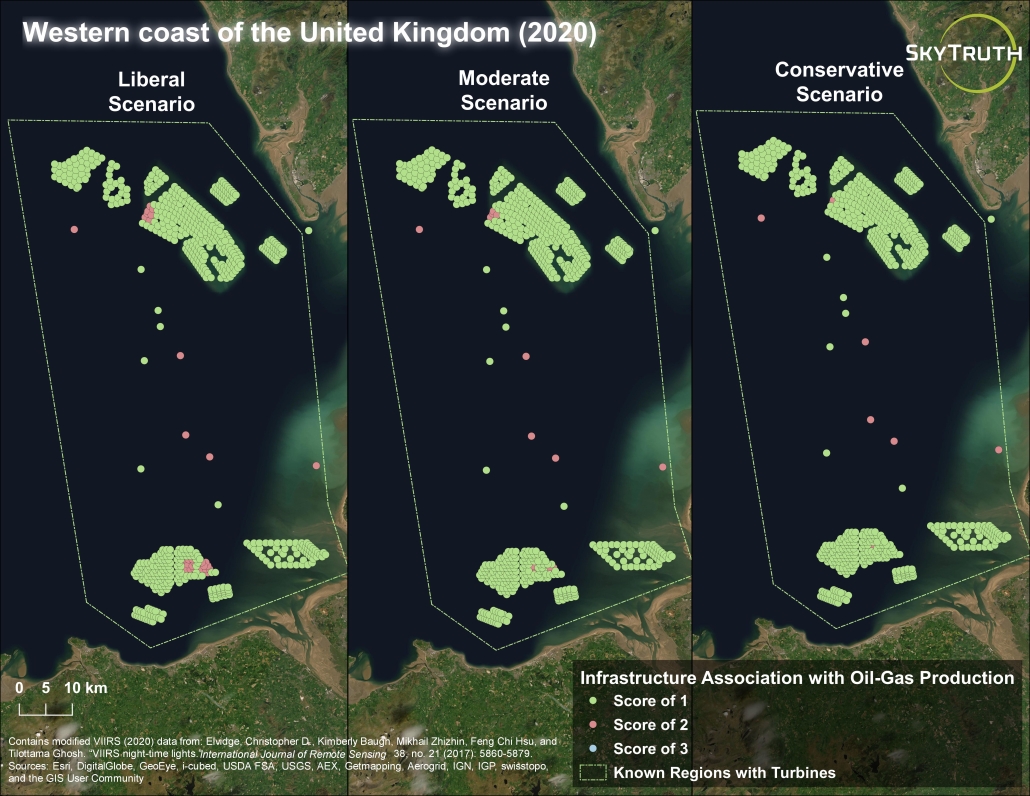 This image shows wind turbines off the west coast of the UK. Our analysis gave the majority of turbines a low score for oil and gas association. The results differ slightly among the three distance scenarios.

So, “who did it?” While this analysis can’t completely answer that question when a pollution event occurs, it does well in highlighting areas of known high oil activity and a structure’s likelihood of being associated with oil and gas production. With environmental injustice and degradation occurring around the world, it has become increasingly important to record the current and potential risks that human activities, such as oil pollution from offshore structures, have on aquatic ecosystems and local communities.

Through our analysis, we were able to identify coastal areas at relatively high risk of oil pollution by developing a data-driven approach to discriminating oil/gas from non-oil/gas offshore infrastructure. This analysis is a step towards quantifying what and where human impacts are in the ocean. As we continue to fine-tune, incorporate additional datasets, and refine our classification techniques, I hope that we will be able to improve the scoring system’s accuracy and expand this work to non-oil offshore infrastructure classifications in the future. This information will be an important addition to Cerulean, helping our model discriminate between oil slicks from vessels and oil slicks from offshore platforms or other sources.

And as we add information about the companies that own those offshore platforms, we will increasingly be able to answer the question: Who did it?

Oil pollution in European waters: It’s worse than you think