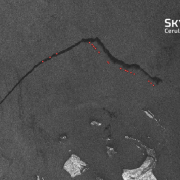 SkyTruth helped investigative journalists report on the extent of the offshore oil pollution problem in Europe.

For the past eight months, SkyTruth has been working with a team of journalists and media outlets associated with Lighthouse Reports investigating the problem of chronic (and often illegal) oil pollution by vessels at sea transiting European waters. This past week, these outlets released a groundbreaking series of stories in The Guardian, CNN Portugal, Trouw, Libertatea, Balkan Insight, El Diario, Deutsche Welle, Jutarnji List, GreenMe, Vijesti, Expresso, and Lighthouse documenting routine dumping of oily bilge waste at sea, and sharing estimates of the extent of this problem based in part on SkyTruth analysis.

European authorities reported that they confirmed a total of 32 slicks seen on satellite imagery in 2019 as oil from petroleum sources. SkyTruth conservatively estimates that the actual number of pollution events is much closer to 3,000.

Here we explain why SkyTruth estimates that the actual number of oil pollution events is much higher than what the European Maritime Safety Agency (EMSA) officially reported. In short, we considered: the intermittent coverage provided by satellite imagery; the lifespan of oil slicks at sea; the inability to discriminate between mineral oil slicks and slicks caused by nontoxic substances such as fish oil and vegetable oil. And we focused on oil slicks caused by vessels in transit, excluding slicks from oil platforms or other sources.

Although Europe is not as severely affected by oil pollution as many other parts of the world, it is still plagued by a large number of discharge events that disrupt local ecosystems and serve as a poisonous reminder of the cost of fossil-fuel dependency. These pollution events occur despite having a dedicated service regularly monitoring European waters for potential violations of international agreements, such as the International Convention for the Prevention of Pollution from Ships (MARPOL), which regulate and prohibit certain types of pollution at sea. EMSA has roughly 30 member countries, and, since 2007, its monitoring service, CleanSeaNet, has continuously scanned the territorial waters of its member states for oil slicks using multiple sources of satellite imagery.

Unfortunately, CleanSeaNet’s reports are not available to the public. Instead, it notifies the member state directly of an anomaly in the member state’s water, and the decision regarding whether to take any action is left to the state’s discretion. The frequency and extent of these events were not shared publicly until 2021, when EMSA released its ​​European Maritime Transport Environmental Report (EMTER) which included its analysis of oil pollution events based on the CleanSeaNet program. However, the information included in the report is challenging to interpret. For example, the data about individual events is obscured because EMSA only reports results in graphs and charts in PDF files, rather than including spreadsheets and databases that list individual events. In addition, the report fails to make clear its methods of review, both in terms of satellite image selection and analysis techniques.

EMSA discloses in the EMTER report that over the course of 2019, its member states investigated 30% of suspected oil slicks detected by CleanSeaNet and reported back a total of 32 slicks that they confirmed to be mineral oil (that is, not from a biological source such as fish oil) from a vessel. At SkyTruth, we recognize that reported observations of a problem are often just the tip of the iceberg, and so we dug deeper on the scale of the problem.

The use of satellites to capture events on Earth in recent decades has indelibly changed the way that humans perceive, measure, and tackle problems on a global scale. However, the majority of satellites that capture imagery (especially those producing data in the public sector) are still more akin to cameras than to video recorders; they don’t record what is happening on Earth continuously, but rather capture a snapshot in time. That certainly holds true for the European Space Agency’s mission Sentinel-1, which produces the lion’s share of imagery used for oil slick analysis by CleanSeaNet as well as for SkyTruth’s project Cerulean. That means that a satellite orbiting the Earth snaps a picture, but then 10 seconds later it’s already 80 kilometers away.

The result is that the satellite will not capture the exact same footprint from the exact same angle again until its orbit and the Earth’s rotation align so it can image that same spot again, days later. This leaves a large gap in the amount of time that piece of ocean is being monitored for oil pollution. In the meantime, oil can dissipate, biodegrade, be pushed elsewhere by the wind and ocean currents, and go undetected.

For example, each of the two polar-orbiting Sentinel-1 satellites (S1-A and S1-B) are on a 12-day cycle that captures the whole world and repeats itself exactly upon completion. Because these two satellites are in the same orbit but are diametrically offset from one another, the repeat time is halved to six days. This is called the repeat cycle, in which a single location on Earth is imaged again at the exact same orientation from space.

But the satellites can capture some locations more frequently from different angles. That’s because Sentinel-1 has a polar orbit, first descending from the North to the South Pole, and then ascending the opposite side of the world, back up to the North. The images taken on the descending and ascending passes have the same area, but the orientation is different. At the equator, that means any point of interest will be captured first by one pass of one satellite and then by the other satellite three days later. This limitation in coverage creates gaps in the data that need to be filled in by extrapolation. 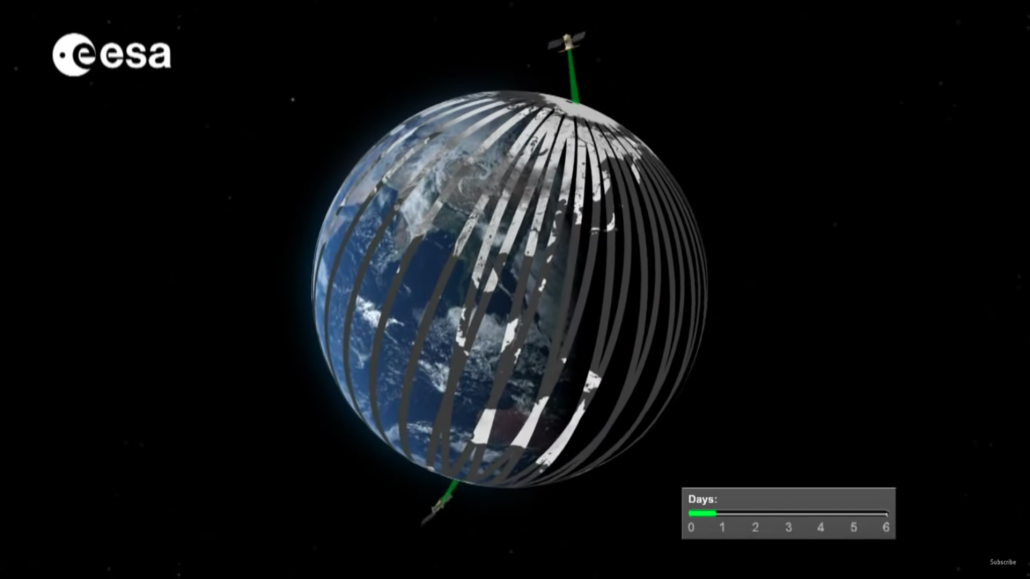 Because the Sentinel-1 orbits pass nearly over the poles, the images captured at high latitudes – such as in northern Europe – overlap each other much more (and hence cover the same location more frequently) than those near the equator, or even in southern Europe. A single point of interest (or even a whole region) can be captured many times with slightly differing orientations. This is the revisit period; that is, the period between which the same location is captured with a different orientation from the satellite. For a region like the territorial waters of the European Union, the average revisit period is just under 40 hours. 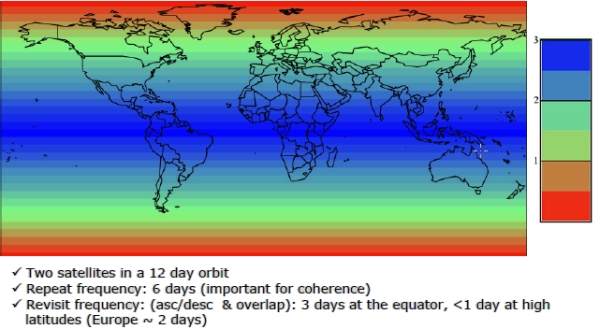 The question is then how this 40-hour revisit period applies to the slicks that CleanSeaNet observed. From our research at SkyTruth, we have found that a majority of slicks become undetectable after 12 hours on the open ocean. If we divide the 40-hour revisit period by 12 hours we estimate that there are likely 3.33 times more slicks than those captured by the satellite, because of the time gaps between images. The EMSA report doesn’t attempt to estimate the true scale of the pollution problem, so it stops short of accounting for these gaps in coverage.

In addition to temporal gaps, it turns out that there are gaps in spatial coverage, as well. Somewhere between 5% and 10% of Europe’s waters never receive any Sentinel-1 coverage at all. This gives another multiplicative factor of 1.06 which increases the extrapolation by that much again.

In order to estimate the actual extent of bilge dumping in European waters, we had to make a number of assumptions about how EMSA’s work was executed – the process was not explicitly shared in any of the documentation we could find. Wherever possible, we tried to make the most conservative assumption – minimizing the problem – in order to get a lower bound on how bad the situation might be.

CleanSeaNet’s purview extends far offshore of its member states. This expansive area is covered by almost 100,000 Sentinel-1 images annually, a challenging number to review. Despite this challenge, we assume CleanSeaNet reviewed 100% of available Sentinel-1 images.

Oil slicks show up on radar imagery quite starkly, but only in the right weather conditions. If the wind is too strong or too soft then the typical radar signature of a slick is obscured, and the slick would be essentially invisible to the Sentinel-1 sensors. We assume that 100% of the ocean was imaged under acceptable conditions for slick detection.

Because there is substantial variation between the poles and the equator around revisit time, the selection of the area being monitored is quite important. If it includes a lot of equatorial waters, then there will be much larger gaps of time when there is no satellite coverage. Though we know that CleanSeaNet has some monitoring effort quite far away from continental Europe (in the far-flung territories of some of the member states), we assume the area of interest covered by the EMTER report is confined to the Exclusive Economic Zones that are contiguous with Europe.

Neither oil slicks from vessels nor from fixed pieces of infrastructure (such as oil platforms) are strictly random in their distribution. Vessel slicks may be concentrated in high-traffic shipping lanes, and infrastructure slicks are limited to locations where there exist permanent oil and gas facilities. The coverage provided by satellite images may not be evenly distributed across the EEZ; it’s possible more images are being collected over the shipping lanes and offshore infrastructure. We do not incorporate this information into our analysis, though it has the possibility of reducing the expected total number of slicks.

The EMTER report provides three different graphical representations of their data, instead of the data itself. Each graph suggests different rates of prevalence for mineral oil slicks compared to “other substances” raising doubts about the interpretability of the data. We were forced to make assumptions. These assumptions are:

The calculations applying these assumptions are spelled out in the spreadsheet below in rows 12, 26, and 27.

Last summer, journalists associated with Lighthouse Reports reached out to SkyTruth after learning about our project Cerulean, a machine learning model that scans thousands of satellite images each day and detects oil slicks on the world’s oceans. Cerulean also combines Sentinel-1 radar satellite imagery with Automatic Identification System broadcasts from vessels to identify the likely polluters. Although the journalists focused their investigation on the effectiveness of EMSA’s monitoring program, we worked closely with them to understand the scale and details of the problem, based on our extensive experience monitoring oil pollution at sea.

When reporters saw our database of detected slicks, they were prompted to look deeper into this issue. But because the pollution alerts from CleanSeaNet are not public, they found it exceedingly difficult to independently assess chronic oil pollution in European Union waters: where it’s happening, when, and who is responsible. They had to submit a Freedom of Information request to obtain some of the data; a process that took many months.

Cerulean aims to bridge the accessibility gap around the world by publishing information on oil slicks freely, as quickly as it is generated and pulling aside the shroud obscuring this persistent problem.

Cerulean’s machine learning algorithm has been running for 18 months, and its analyst-reviewed results are available via our free mapping interface SkyTruth Alerts. The datasets have been made available directly to research partners working to staunch the flood of pollution, and SkyTruth is beginning to recognize patterns around the perpetrators, victims, and characteristics of these events. The next version of Cerulean is currently under development, and in addition to serving higher-confidence predictions, it will be expanded to include slicks from stationary sources as well (such as oil rigs and FPSOs).

As we ramp up the automation process – and as more and more satellites survey the remotest seas – Cerulean will continue detecting oil slicks to create a global map of oil pollution and identifying the worst polluters around the world.

EPA’s temporary suspension of environmental enforcement seems to have reduced...

That’s not Atlantis, it’s just a bunch of human-made structures at sea
Scroll to top