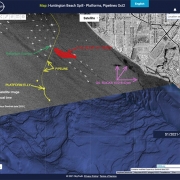 SkyTruth Alerts is our go-to tool for monitoring and investigating incidents like the Huntington Beach Oil Spill.

We’re often asked how we do our work here at SkyTruth, particularly when a major environmental event makes the news. The recent oil spill at Huntington Beach is a good example. Over the past few weeks, the SkyTruth team has used tools available in SkyTruth Alerts (in particular, satellite imagery) along with vessel tracking data to investigate how this spill occurred and who might be responsible. We’ve been making that information freely available to journalists, activists, and others seeking to explain what happened and avoid future disasters.

In this blog post, we want to share the steps we took to investigate this spill, because you can use the same techniques to monitor the places you care about, helping to raise awareness about a tragic environmental accident and hold polluters accountable.

When we first started investigating this particular oil spill, we knew that it had taken place on October 2, somewhere off the coast of Huntington Beach. We had heard that a pipeline might be involved, but also planned to look for other potential sources of the spill, like nearby ports, ships, and oil rigs. 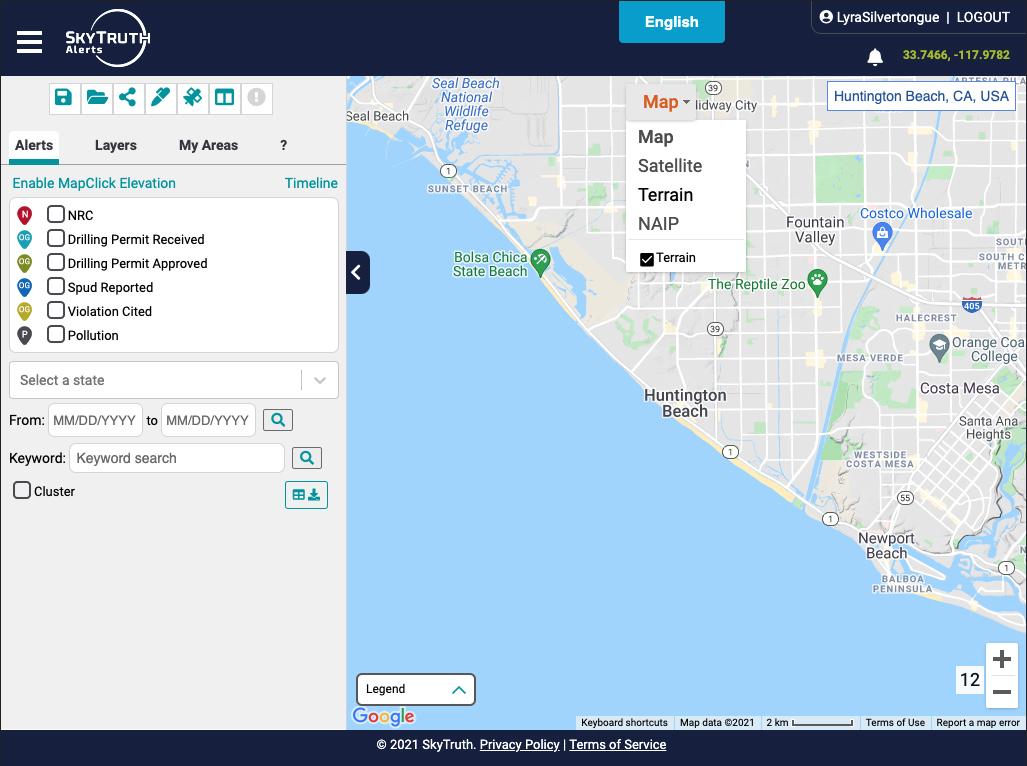 1. The first thing we did was open up SkyTruth Alerts and log in. (Creating an account lets you view recent satellite imagery.) We searched for Huntington Beach and turned on the Satellite basemap (dropdown at top center of the map) to take a look around. 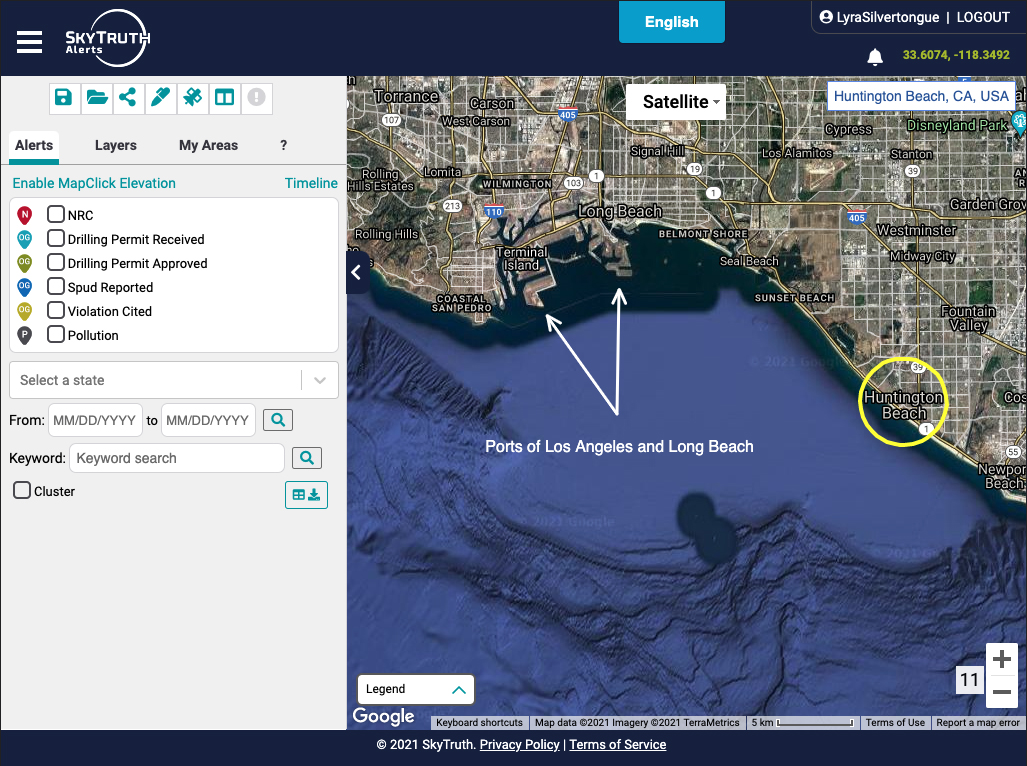 2. Once we were oriented, we noticed that there are two large ports just up the coast from Huntington Beach: the Port of Los Angeles and the Port of Long Beach. 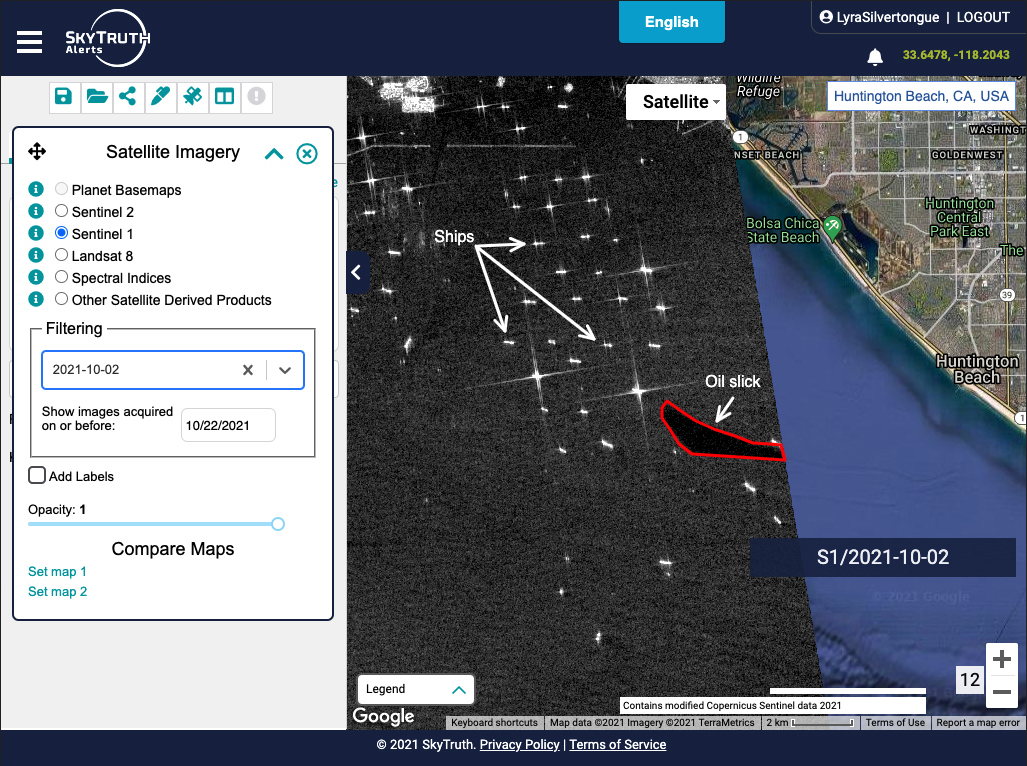 3. We know from past experience that Sentinel-1 radar satellite imagery is usually the best choice for viewing oil slicks on the surface of the water. The oil spill was supposed to have happened on October 2, so we checked to see if Sentinel-1 satellite imagery was available for the Huntington Beach area on that date. We discovered that imagery was available from the evening before the spill was reported, and it showed what looked like at least part of a big, oily slick on the water. All of those bright spots on the water are ships anchored outside the crowded ports, waiting their turn for limited crew to offload their cargoes. (We used the annotation tools in Alerts to add the text, arrows, and oil slick boundary to the map.) 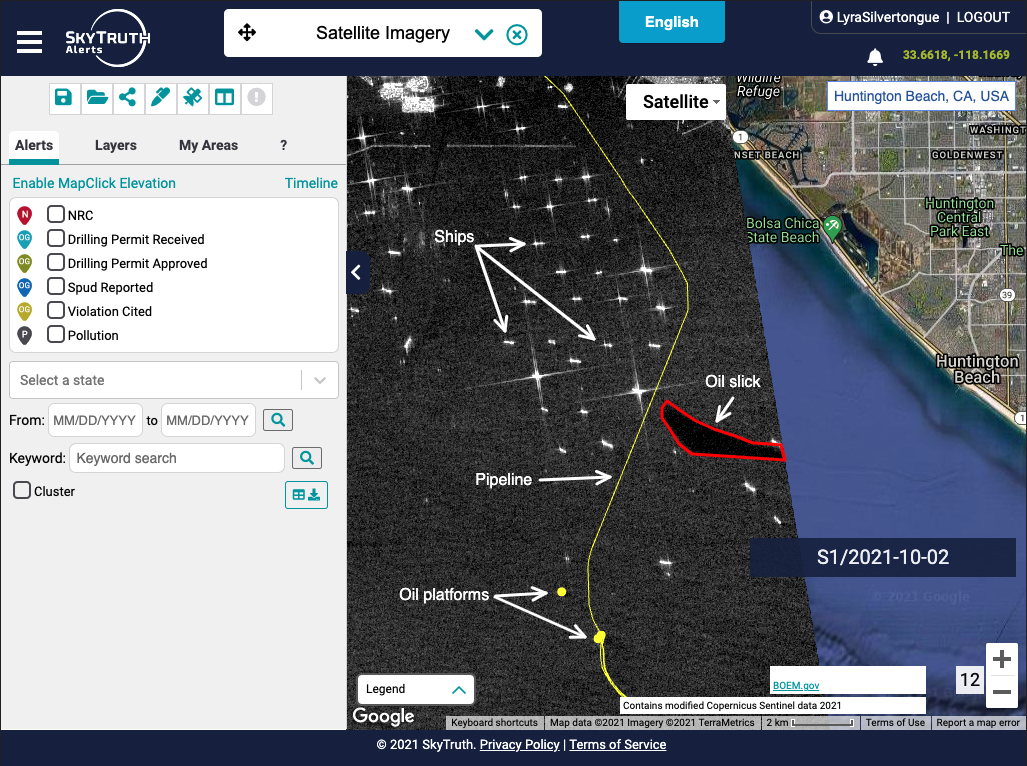 4. We added pipeline and oil platform layers to the map.

These layers were not available in Alerts when we first started monitoring the situation. At the time, it was an extra step to download the shapefiles and use the Add Data Layer feature to add them to Alerts. We looked for and found them freely available online from the U.S. Bureau of Ocean and Energy Management (BOEM) and have since added both datasets to Alerts as layers so they’re available to everyone. Data like this is available from a variety of sources for a variety of issues. If you know of a data layer that you would like to see included in SkyTruth Alerts, please get in touch with us and we’ll be happy to see what we can do. 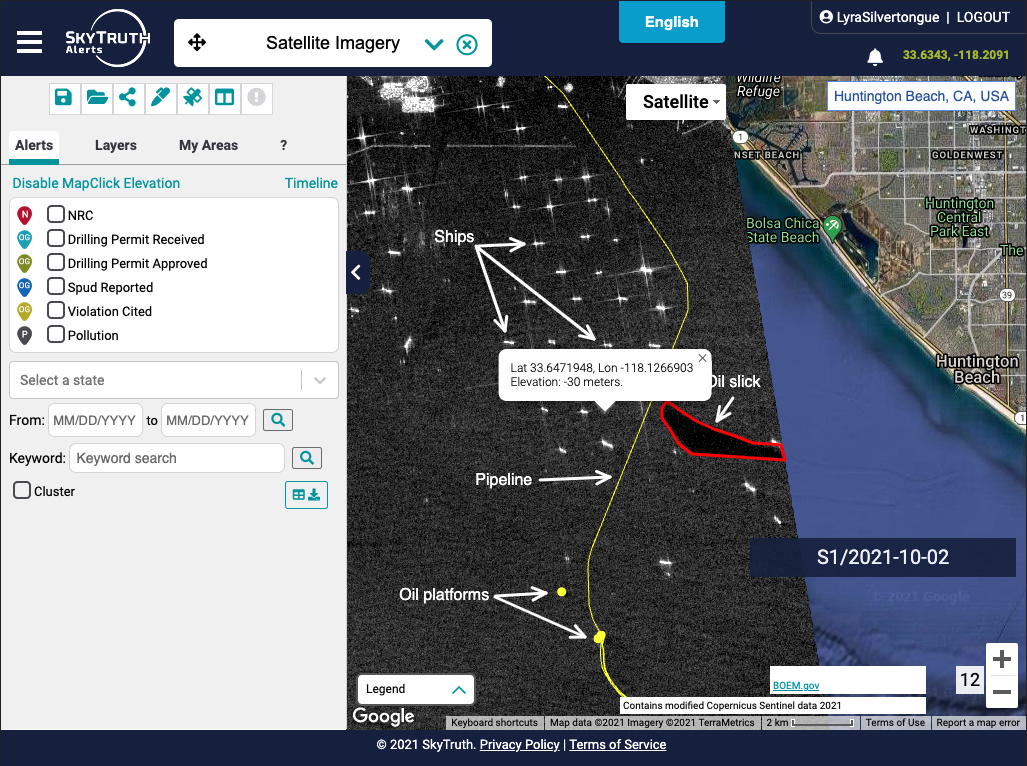 5. We also wanted to look at the depth of the water at the oil spill site to determine if it was feasible for the pipeline to have been damaged by a vessel anchored nearby. We thought that knowing the water’s depth might tell us which vessels’ anchors could have been dragged over the pipeline. If a vessel is anchored 300 meters (984 feet) from the pipeline and the water is only 30 meters (98 feet) deep, that argues against that vessel having anything to do with damaging the pipeline. But if the water is 300 meters deep, then it becomes more likely. At least, that was our speculation.

In order to find out the depth, we used the Enable/Disable MapClick Elevation tool in Alerts, which lets you click anywhere on the map to find out the height in meters above sea level. Or in this case, the depth of the water offshore (shown in the image as negative elevation, i.e., -30 meters). 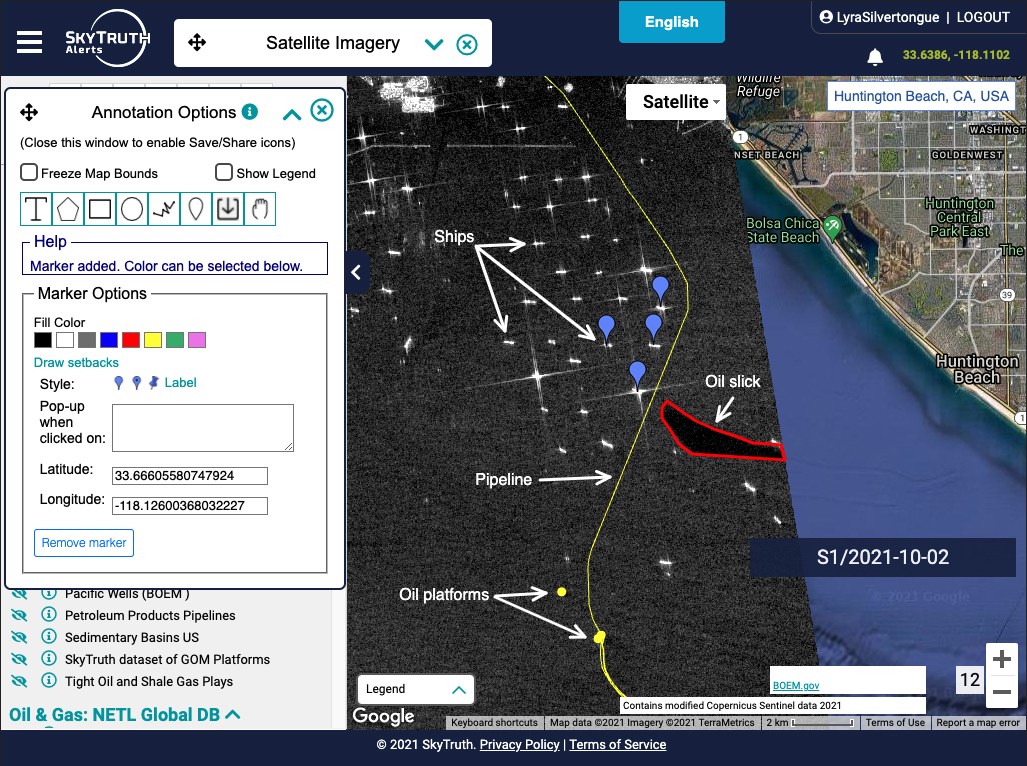 6. Our next step was to find out which vessels had been in the area at the time and to track their movements during the time of the spill. To do this, we placed map markers on all the nearby vessels to find out their exact latitude/longitude coordinates. Once we had this information, we used a commercial product called exactEarth ShipView™ to identify the vessels by name and track their movements.

7. After identifying the vessels in ShipView™, we exported each ship’s tracks and added them to the Alerts map using the Add Layers tool. (We created many different versions, the above images are just two examples.) In each case, we added oil slick outlines, arrows, and text to the map to show what we thought we were seeing. 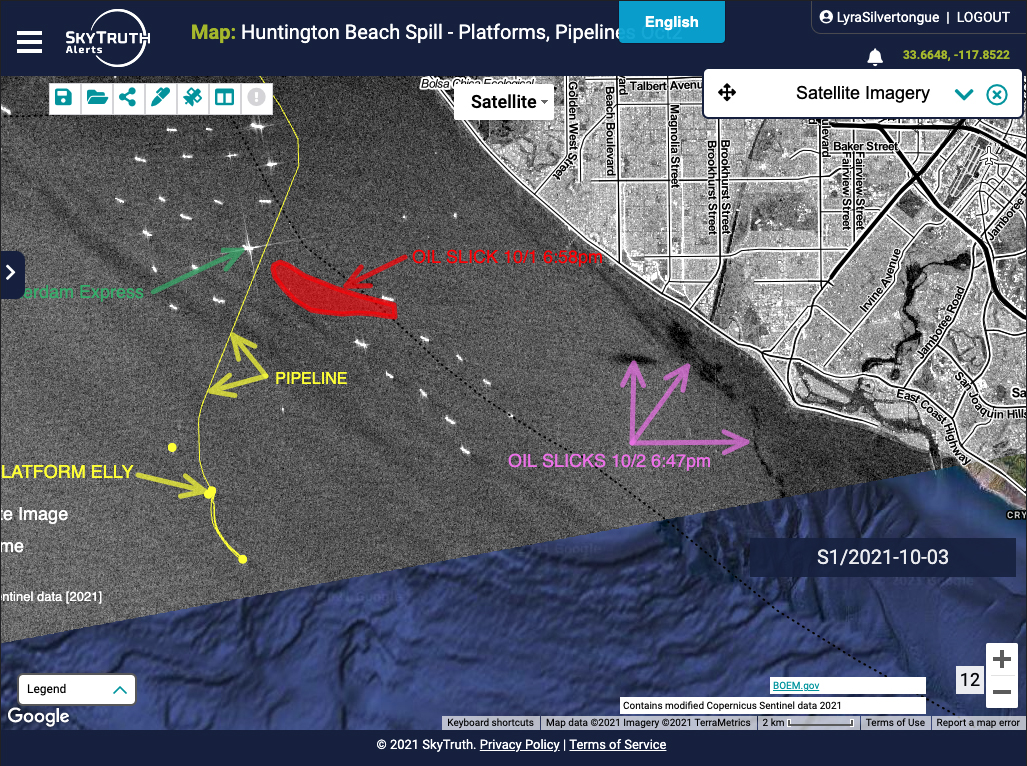 8. Finally, we saved our work as a public map so it could be shared with news media, on Facebook and Twitter, and with reporters.

At the time of this writing we still don’t know for certain what caused the pipeline leak. SkyTruth’s final analysis identified two massive container ships that apparently were blown back and forth across the exposed pipeline during a storm earlier this year. Last we heard, the U.S. Coast Guard is continuing to investigate. Although the full cause of the spill remains unknown, SkyTruth’s monitoring helped raise public awareness about the risks of offshore drilling and exposed pipelines – especially near crowded shipping zones. We know that at least 18 local and national media outlets used maps and images created by SkyTruth to inform the public about this tragic incident (including the CBS Evening News). We hope that by using SkyTruth Alerts, you will also succeed in spreading the word about threats to the environment in the places you care about.