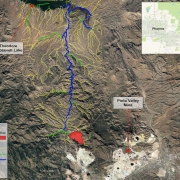 Extracting metals from the Earth is a complex and costly process that often involves blasting rocks and using toxic chemicals. Mining can have many adverse impacts on our environment including deforestation, soil and groundwater contamination, erosion, and significant use of water resources, all of which can lead to health problems in local communities. You can read more about the impacts of mining here.

My first project as an intern at SkyTruth involved a potential mining threat flagged by a partner organization, Earthworks, whose mission is to protect communities and the environment from the adverse impacts of mineral and energy development. They inquired about potential drinking water contamination from a mine tailings storage facility in Arizona. Tailings storage facilities are crucial to mining operations because they are used for storing waste such as pyrites and sulfides that can form sulfuric acid. But they pose a threat to the environment if not maintained and managed well.

Pinto Valley Mine, located just seventy miles east of Phoenix, Arizona, specializes in copper mining  and has four tailings storage facilities on the property. Earthworks is most concerned with tailings storage facility #4 (TSF4). This facility was built using an upstream construction method, meaning the base is constructed over muddy mining waste instead of on solid ground. This makes it more prone to collapse. You can learn more about upstream construction in this article. The waste storage facility lies on the northwest end of the mine and is the largest storage facility at Pinto Valley. It also lies just 20 miles south of the Theodore Roosevelt Lake, a vital drinking water source for the Phoenix metropolitan area. Earthworks wanted to know: in the event that TSF4 leaks or the dam fails, could the waste flow into the lake, affecting the main water supply for four million residents?

In order to find out whether a failure at TSF4 would potentially contaminate the lake, I performed a hydrology analysis in ArcGIS Pro. I started with a Digital Elevation Model (DEM) of the area of interest, which provides a gridded representation of the Earth’s surface and can be used to highlight changes in elevation. These DEM files are the main input for determining the flow of water in our hydrological analysis. DEM data from NOAA’s Digital Coast Data came in the form of smaller tiles that needed to be put together to create a cohesive dataset of the entire area. This process of merging DEM tiles together is known as mosaicking, and after mosaicking the tiles together I finally had a useful DEM that I could analyze. 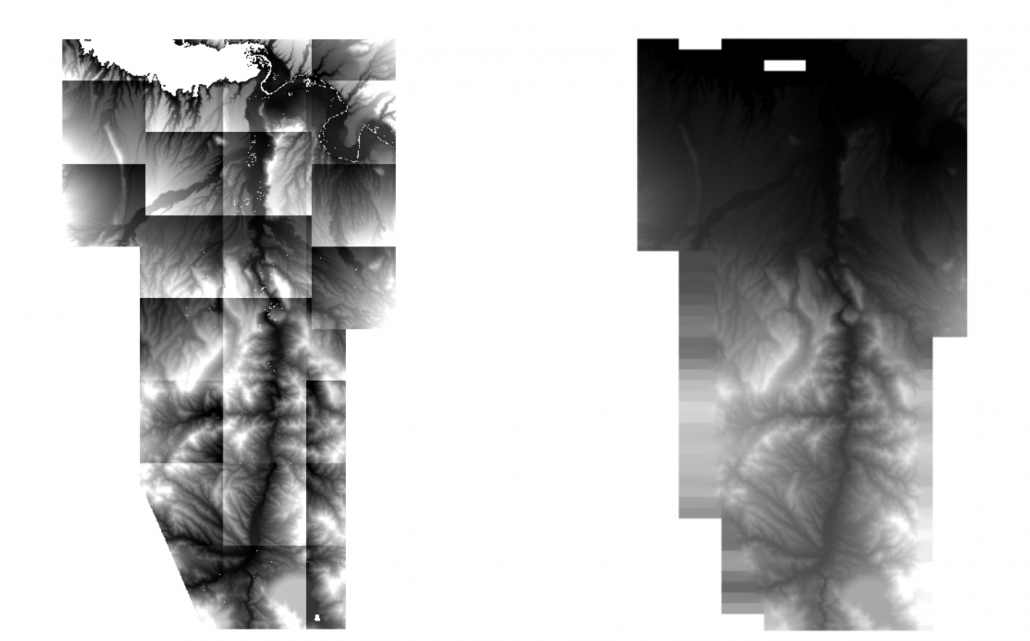 Illustration of before and after mosaicking tiles of the DEM.

Two processing steps were crucial to the hydrology analysis, ArcGIS’s (1) Flow Direction and (2) Flow Accumulation functions. Flow Direction determines which way water would flow in every pixel of our DEM based on the changes in elevation from one pixel to another. Flow Accumulation reveals all potential stream paths in the landscape based on the flow directions calculated in the previous step. It also classifies the stream paths based on how many pixels flow into a stream at any given time. ArcGIS color codes the output based on these pixel counts. For example, if streams have one to two thousand pixels flowing, they are assigned the color red. If streams have two to three thousand pixels flowing they are assigned green. The model continues this color coding process until it has reached the maximum number of pixels. For this dataset, it calculated up to seven thousand pixels. The stream paths represent a hypothetical situation that shows where all pixels could be flowing. Examining the stream paths, I noticed that stream flow from TSF4 was flowing into the lake.

After deriving the Flow Direction and Flow Accumulation products, I delineated the watersheds that encompass TSF4 and the lake and created a stream network using ArcGIS’s Stream Order function. Stream Order creates a cohesive stream network that shows all stream paths in the area of interest. I organized the stream paths based on the pixel count from Flow Accumulation. This revealed the largest stream paths and identified where the smaller streams flowed. It also revealed the path of pixels flowing from TSF4 to the lake. I came to the conclusion that, if the dam leaked or failed, the waste from TSF4 could contaminate the stream and eventually end up in the Theodore Roosevelt Lake. 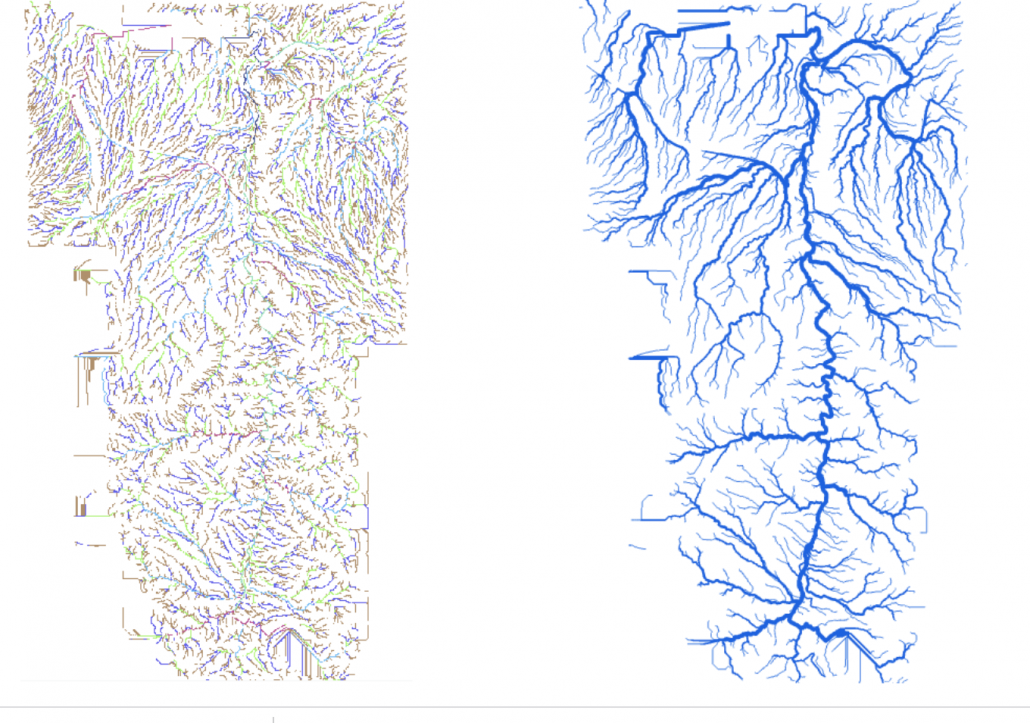 Revealing the threat posed by TSF4 could spur government agencies to push mining companies to adopt safer methods of waste disposal. Jan Morrill, lead Tailings Campaign Manager at Earthworks, first raised concerns about this facility last winter to the Arizona Department of Environmental Quality (ADEQ). In a complaint form dated February 8, 2021, , she explained that the “salt precipitants on the outside embankment of [TSF4] indicate saturation in the dam material, leaving it at extreme risk of failure.” She also explained that if the embankment was to fail, it “has the potential to impact critical surface and groundwater resources, including Lake Roosevelt, wildlife habitat, and some existing infrastructure.” The ADEQ took her concerns into consideration and inspected the facility. They concluded in an inspection report that “what appeared to be salt precipitants were in fact wind blown tailings,” and there was “no threat of tailing collapse at Pinto Valley Mine.” 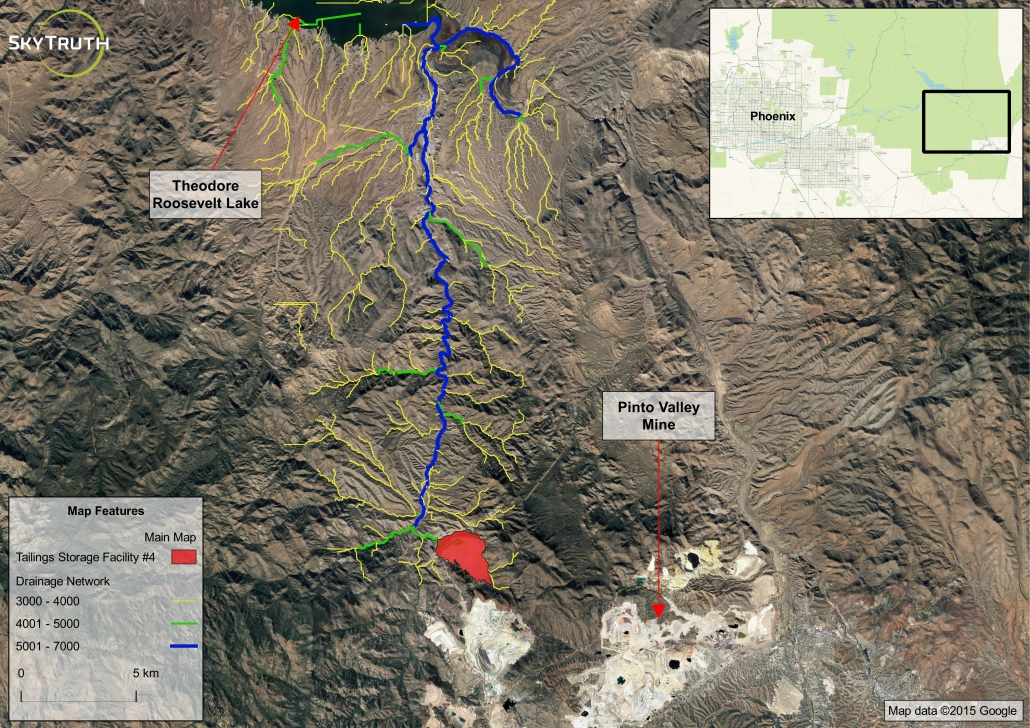 My analysis of TSF4 supports Earthworks’ suspicions of harm from a potential dam failure: although there were no immediate threats during ADEQ’s inspection, the possibility of a future dam failure still looms. TSF4 should continue to be closely monitored now that there is evidence  that the waste could flow into the lake. Recognizing the problem sooner rather than later can prevent a major catastrophe that could impact millions of lives, nearby habitats, and essential water resources. I am fortunate that I had the opportunity to use my skills to potentially change mining regulations and protect the lives of others.