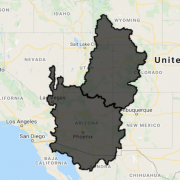 (This is the second in a four part blog series. You can read the first post here.)

Welcome back! Last time, we had a quick look at our newly released, 35-year dataset of spectral indices for the Colorado River. This time, I’d like to walk through our methods and show how watershed managers can use them to see hotspots of vegetation loss and regrowth. If you’re just tuning in, it might be helpful to have a look at my brief overview of the project here, or read more about it in a post from Cameron Reaves, one of our recent interns, here.

The Colorado River drains an enormous part of the desert southwest. As I’ve mentioned elsewhere, the United States is divided and subdivided into ever-smaller hydrologic units, each with their own unique identifier called a hydrologic unit code or HUC. The system divides the country into 22 regions, 223 subregions, 387 basins, 2,303 subbasins, roughly 20,000 watersheds, and more than 100,000 subwatersheds.

The Colorado River is divided into two regions: the Upper Colorado River region and the Lower Colorado River region. Combined, they cover 277,189 square miles — just a bit larger than the state of Texas. We decided to process the study area in smaller, more manageable pieces, and settled on processing it one basin at a time (there are 25 basins in the two regions). That decision added a few extra steps to the workflow, but in retrospect, it was really helpful — this was uncharted territory for us, so it was nice to be able to make incremental adjustments and tweaks before getting too far afield.

For each basin, we created a 35-year collection of cloud-free, annual satellite image composites (one image per year for each year from 1985–2020). We also added the seven spectral indices such as Normalized Difference Vegetation Index (NDVI) and others (e.g., NDMI, EVI) as new bands to each of the composites in the collection. When the preprocessing was finished, we had 25 image collections (one per basin). Each collection had 35 images (one per year), and each image had 14 bands (seven original Landsat bands and seven spectral indices).

Once we had all of the images that we needed, each with all of the bands that we needed, we could start to calculate trends. Ultimately, we want to do that analysis at the pixel-level; basically, a 35-year time series for every 30 meter square piece of Earth that drains into the Colorado River. But first we tried the analysis at the subwatershed level. Subwatersheds, or HUC12s, are the smallest hydrologic unit in the U.S. This meant that we had to take the average value of each band in each subwatershed. In Earth Engine, this is called “reducing.” For more on what it means to reduce an image collection in Earth Engine, have a look here. Once we had finished with all of that processing, we had the average value of each band, in every subwatershed, for every year. You can find it as a CSV file in this GitHub repo, along with all of the code used to generate it.

I mention all of this because we don’t report a bunch of descriptive statistics, such as mean, median, or mode, for the dataset as a whole. As the river winds its way down from headwaters in lush, mountain forests, it slowly becomes little more than a ribbon of green cutting through a barren, rocky desert. It shouldn’t come as a surprise, then, that some subwatersheds are greener than others. We want to avoid mischaracterizing the study area as a whole or inappropriately comparing smaller areas within it.

With that in mind, we still wanted to see if there were any general trends that we could pick out. For instance, are any places getting greener? To explore this question, we ran a simple linear regression and mapped the slope of the 35-year trend line for each subwatershed using QGIS. The image below shows trends in NDVI — subwatersheds shown in blues have seen NDVI values increase over the last 35 years, while subwatersheds shown in reds have seen NDVI values decrease. There’s deeper analysis for researchers and watershed managers to do, but even just a quick glance at the distribution of slopes shows interesting hotspots of declining NDVI trends in the southeastern portion of the study area (such as near Phoenix, Arizona,) as well as a few hotspots of increasing NDVI trends in the northwestern portion of the watershed (near Aspen, Colorado). 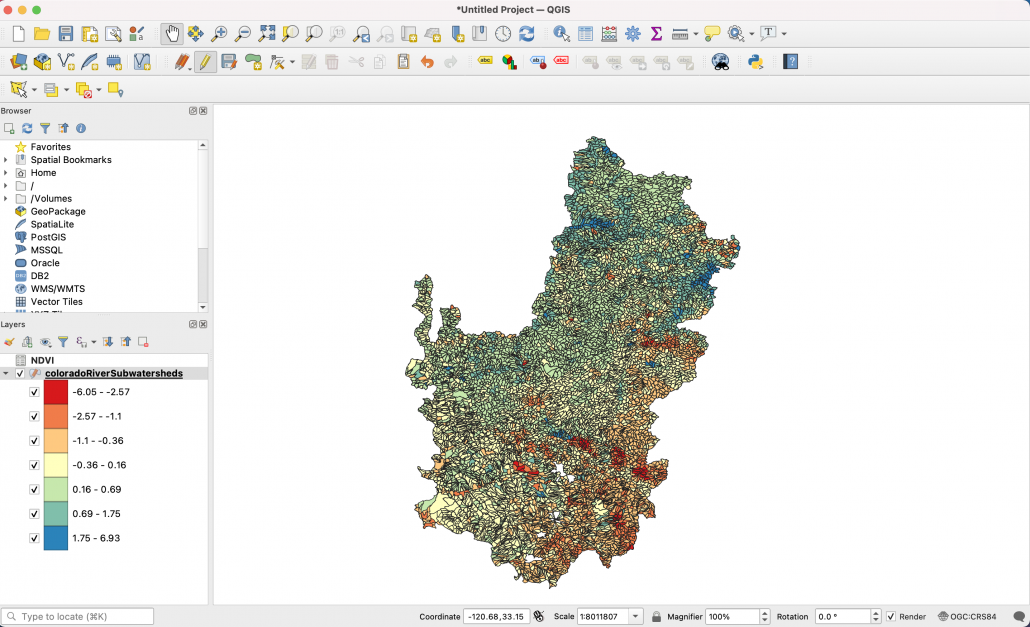 Subwatershed trends in NDVI in the Colorado River system over the last 35 years.

Next month, we’ll introduce our upcoming Colorado River Issue Map available in SkyTruth Alerts. The new map will have all of the vegetation datasets that we’ve created, and users will be able to explore subwatersheds that interest them. We’re also hoping to include a scaled-down version of our workflow that runs at the pixel-level for a single subwatershed. We suspect that watershed managers might find it useful to know where hotspots of vegetation decline or regrowth are occurring within their areas. The image below shows an example of our scaled-down workflow run on the Dolores River in western Colorado. We’ve used a slightly different color ramp, but the idea is the same: pixels (remember, each of these is 30 meters by 30 meters on the ground) shown in blues have seen their NDVI values increase over the last 35 years, while pixels shown in orange have seen their NDVI values decrease. One observation that clearly jumps off the map is the large areas of orange, indicating that vegetation throughout much of the watershed has declined over the past 35 years. 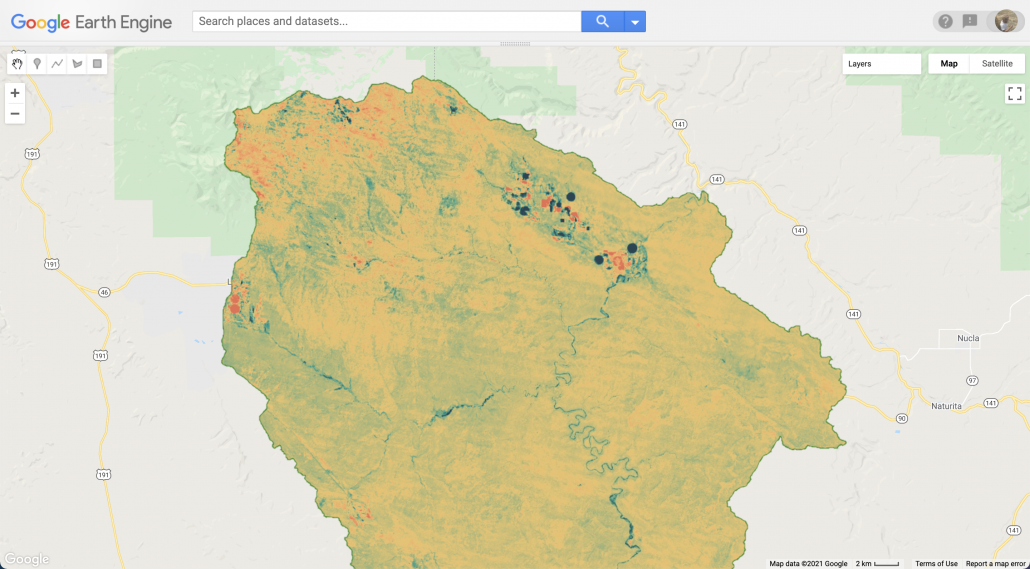 Pixel-level trends in NDVI in the Dolores River watershed over the last 35 years.

We hope that this product will provide an easy-to-use tool for those who want to track the progress of vegetation loss or recovery in areas under active management or restoration and explore the possible causes of these changes, including the impacts of climate change.

We also plan to highlight a few groups working on restoration in the Colorado River and look at some of the watersheds where they work. Stay tuned!