NASA Earth Observatory image modified by SkyTruth
Blog - Latest News
You are here: Home1 / Climate2 / Will the forest ever return? 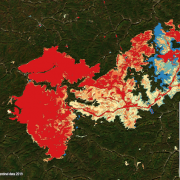 Working with our partners, including Appalachian Voices, SkyTruth has developed a tool to help activists, scientists, officials and others estimate whether mined sites have fully recovered.

SkyTruth has been documenting the impacts of mountaintop mining in Central Appalachia for years, following the growth of this destructive activity throughout the region and helping researchers and others understand its harmful environmental and public health impacts. 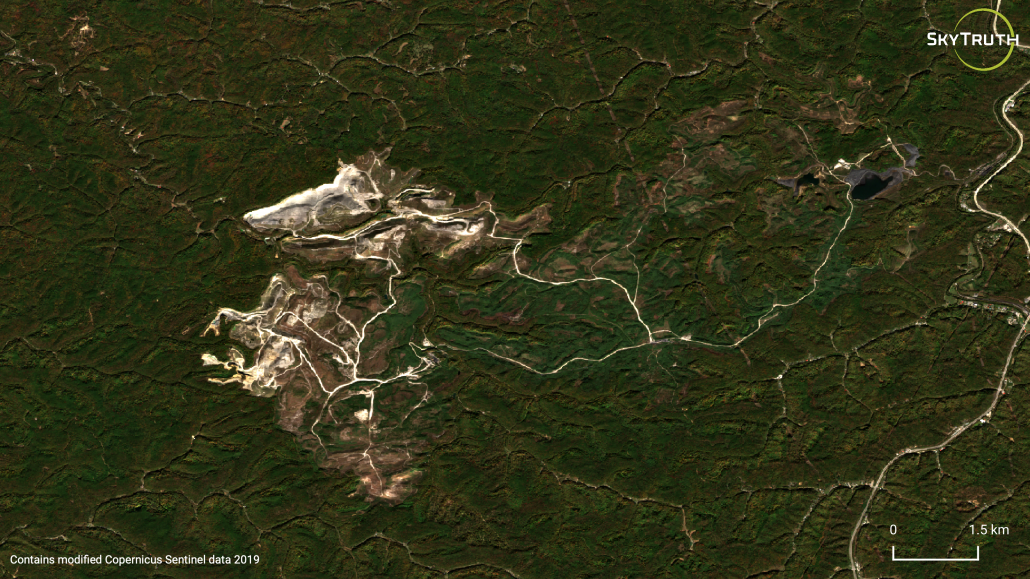 The Hobet 21 mine in West Virginia, as it appears in Sentinel-2 satellite imagery. 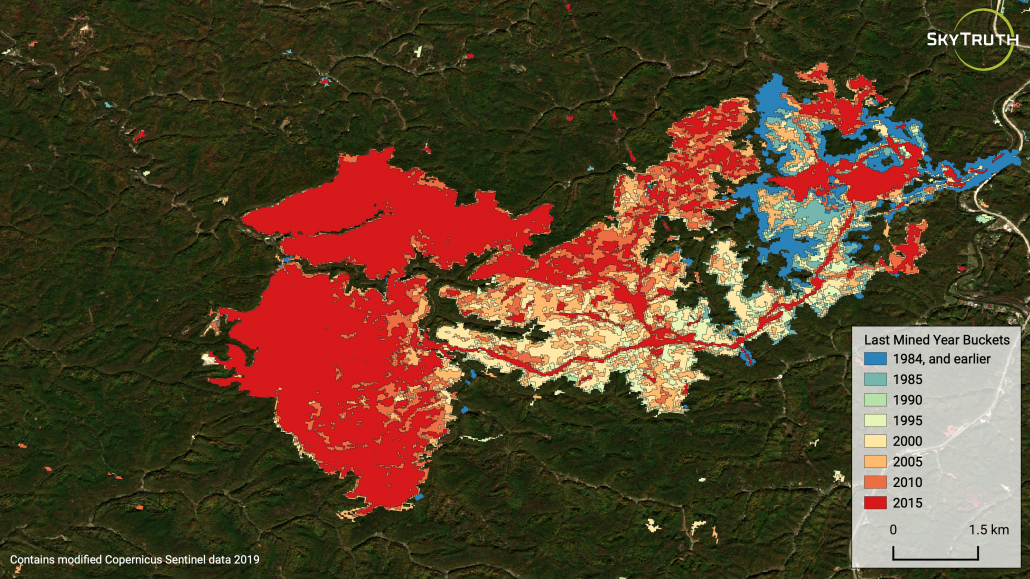 Areas of the Hobet 21 mine visualized based upon the 5 year interval in which they were last actively mined. Note, the 2015 bucket includes areas which are still being mined.

More recently, we’ve been watching coal mining in Central Appalachia continue its downward spiral. As mining in the region declines and coal companies shut down or declare bankruptcy, the question of reclaiming land devastated by mining is becoming ever more important. The federal Surface Mining Control and Reclamation Act requires the restoration of mined lands to a level such that the land is able to support the uses it was able to support before mining, or to a “higher or better use.” To this end, mine operators are required to post bonds that can be used for recovery if the operator fails to complete their approved reclamation plans, including because of bankruptcy.

As we’ve discussed in previous blog posts, the requirements for bond release vary by state and local jurisdictions. And despite the regulatory requirements for recovery, reclaimed mined lands often don’t look like the forested landscapes they used to be. Instead, they often support invasive shrubs and grasses growing on poor soils which are heavily compacted.

Today, with our partners at Appalachian Voices, Downstream Strategies, 4E Analytics, and Green Forest Works, we are publishing the results of our Central Appalachian Mine Reforestation Assessment. Together we have developed an approach and dataset that assesses reforestation progress on formerly mined lands in the region. Through our research we examine whether effective reforestation has occurred on former mines, assess whether the new methods for reclamation produce better results than traditional approaches, and examine how well reclaimed mines compare to unmined Appalachian forests.

Our approach to analyzing mined landscapes relies on Landsat satellite imagery. Using data provided by the Landsat satellites, we developed the Aggregated Recovery Metric (ARM) to serve as a measure for forest health. The ARM incorporates data from three spectral indices which can be calculated from Landsat. The first of these is the Normalized Difference Vegetation Index (NDVI), which measures vegetation intensity. We also use the Normalized Burn Ratio (NBR), which provides an additional measure of vegetation intensity and structural properties and is well suited to measuring long term changes in vegetation. The third index in the ARM is the Normalized Difference Moisture Index (NDMI), which measures vegetation moisture levels and is helpful for differentiating between different vegetation cover types (ie. forest, shrubs, grasses).

The ARM formula is based on the idea that averaging NDVI and NBR will provide an aggregate greenness value: it does this by joining the “active photosynthetic vegetation quantity” from NDVI with the “forest structural properties” of NBR. This aggregate greenness is then averaged with the vegetation moisture data provided by NDMI to determine health for the site. We expect healthy forests to have high greenness and moisture levels, reflected by a high ARM value, while unhealthy forests, shrubland, or grasses will have lower greenness and/or moisture and lower ARM values. 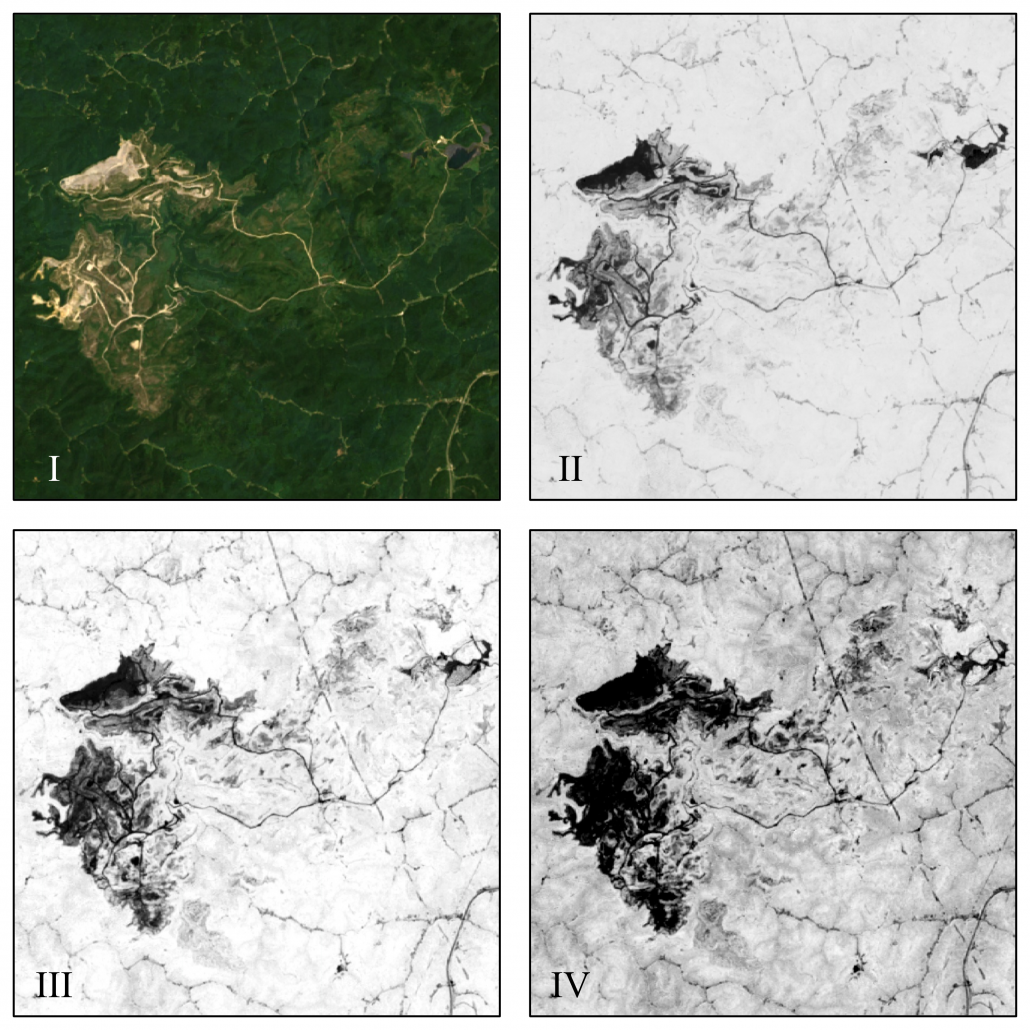 This shows the Hobet 21 mine as it appears in true color (Image I), and how it looks in each of the indices used to calculate the ARM. NDVI is visualized in Image II, NBR in Image III, and NDMI in Image IV.

Using data derived from our 2018 research documenting the area of mined land in Central Appalachia since 1985 and Google’s Earth Engine platform, we calculate the ARM value for every mine site which we identify as no longer active. We then compare the ARM for each disturbed site to a set of reference (healthy) forest sites within the same EPA ecoregion and convert the ARM into a percentage value. The percentage reflects how well the site recovers to a level that would be expected for a healthy forest. For example, an ARM value of 70% does not mean a site has been 70% reforested, rather the value is 70% of what would be expected for a healthy forest. Compared with 60% for grasslands, 85% for a young or poor forest, and 95% for more developed forest,  this ARM value shows that the site hasn’t recovered its forest characteristics. In this way, we use ARM values as benchmarks to document how long it takes a site to reach each level of recovery. Appalachian Voices has created a web map which you can use to examine sites yourself and explore the ARM of mined lands.

The ARM is just the first phase of our research into how mined lands recover. Going forward, we are developing an approach which makes use of a First Order Autoregressive (1AR) model to evaluate ecosystem performance, and applying it to each of the bands used to calculate ARM (NBR, NDMI, NDVI) individually. This approach calculates the general rate of recovery for a site by examining yearly changes to band values, as well as defining an expected steady state value for the band based on the site’s post-mining data values. The rate of recovery provides information about the site’s recovery trend, as positive or negative, as well as a description of the general speed of recovery for that band. The steady state value output from 1AR will compare the site’s expected level of recovery to either a reference forest baseline, or to the site’s pre-mining state. This data will facilitate comparison of different reclamation practices, allowing researchers to examine how these differing practices can affect individual aspects of landscape recovery.

With these new data sources we are facilitating a better understanding of the way that mined lands recover, which will hopefully strengthen the bonding and release process and allow local communities and state officials to examine the degree to which the land truly recovers before bond funds are returned to mining companies.

The trouble with methane