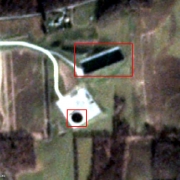 By understanding the many stages of oil and gas drilling, skytruthers can detect new activity on their own using imagery on SkyTruth Alerts.

Since its inception, SkyTruth has used remote sensing to monitor the expansion of oil and gas drilling in the United States. Now, we are working to automate the detection of drilling sites around the world using machine learning, training computers to identify the telltale signs of drilling in remote regions. Over the course of my internship, I aided in expanding this work to incorporate road detection as well. The construction of access roads is one of the earliest indications of future drilling projects and could help the public anticipate drilling activity in their region before construction begins. During this work, I was inspired to investigate the anatomy of a drilling site over time to strengthen our understanding of fracking and its visual properties.

The world is a big place and automating detection around the globe will take time. In the meantime, skytruthers who care about drilling in their communities and special places can monitor those places themselves using Sentinel-2 and high-resolution Planetscope satellite imagery on SkyTruth Alerts. A first step in detecting new well pads (drilling sites) is understanding what they look like at each stage in a lengthy process. Well pad development is site-specific but there are a number of visual cues to look for. We hope to clarify the various components of a well pad and give an idea of what to look for on satellite imagery during the lifespan of a drilling operation.

The term “fracking” often is used generically to refer to oil and gas drilling using the well stimulation technique of hydraulic fracturing. But fracking is just one component of a larger process. Fracking is designed to extract natural gas and petroleum from rock formations that are difficult to reach with conventional vertical drilling. The actual hydraulic fracturing process itself may only last for three to ten days per well, though each well pad may contain a dozen or more wells, and each well may be re-fracked over a span of decades. This blog post describes and illustrates the multiple stages in the development of a well pad from site investigation to production.

The spread of hydraulic fracturing sites in Wilcox, Pennsylvania over 6 years (2014-2020)

To begin the process, energy developers survey candidate drilling sites, sign lease agreements (which allow them to drill on the land), and obtain the necessary permits and licenses. Shortly thereafter, they clear the land, and construct access roads to bring earthmoving equipment to the site. Soon, the distinctive rectangular look of a well pad comes into view. The PennEnergy Resources’ drilling project in Butler County, Pennsylvania is a useful example. The fracking disclosure website FracFocus provides a variety of diagnostic information about this particular site, including start and end date, borehole (well) depth, and frac fluid composition. We can see the initial excavation and development of the site including preparation of reserve and settling pits for water and frac fluid discharge. During this stage, we may also expect the auguring and casing of a surface hole (approximately 50 feet) to protect near-surface freshwater aquifers. The following time-lapse animation illustrates the evolution of this site from pre-development to construction of the ballast layer (gravel or other coarse stone laid down to stabilize the site).

The preparation of well pad PER W60 in Butler County, Pennsylvania (click on image to see changes)

Once the necessary equipment is onsite, we can expect to see the construction of a substructure that supports the derrick (a large metal structure for supporting drilling infrastructure) and related components. Because most contracts involve drilling multiple wells on a single pad, these large structures are designed to be maneuvered around the site — PER W60 is reported to contain seven concurrently active wells, all with spud dates (when primary drilling begins) between June 10, 2019 and June 13, 2019. Next, the developer drills a borehole to the depth required to reach the shale holding the oil and gas reserves. In this case, the target is natural gas in the Marcellus Shale Formation, and the documented vertical depth is 6,620 feet. Once the drill reaches the desired layer, it will begin to rotate horizontally and continue until it hits a gas-rich region, which may involve up to another 5,000 feet of lateral drilling. Carbon steel casing is inserted into the borehole and cemented in place to isolate the drilling operation from aquifers and reservoirs. This is a particularly sensitive step in the process. Casing failures are a looming threat, leading to disastrous blowout incidents (uncontrollable gas or oil release from the wellbore), water contamination, and greenhouse gas emissions. Older fracking operations are not equipped with modern diagnostic tools to indicate when an adverse wellbore event occurs, making these sites especially worrisome. As unconventional gas and oil production continues to grow, the integrity of these extraction processes long-term is a serious matter of concern.

Once the well has been drilled, the casing is perforated at several intervals in the “target zone,” the drill rig is moved off the drilling site, and an array of trucks and pumps is brought in to begin the hydraulic fracturing process to stimulate production. Fracking fluid is injected into the well at high pressure, deepening existing cracks and creating new ones to release oil and gas into the wellbore. This fluid is primarily composed of water, crystalline silica (quartz sand), and a variety of other additives to prevent microbial growth and increase hydrocarbon production. The W60 operation visualized below consumed more than 12 million gallons of water during the fracking process. It is important to note that not all states require hydraulic fracturing companies to disclose their frac fluid specifications. Drillers may choose to keep their formulae private due to fear of leaking trade secrets. This opaqueness makes it very difficult for health professionals and environmentalists to assess the impact of fracking in their state.

So what does this process look like from above?

During the stimulation process, the site may contain a range of specialized fracking equipment, including a slurry blender for composing fracturing fluid, a fleet of trucks for material transport, storage tanks, and mobile command centers for monitoring. 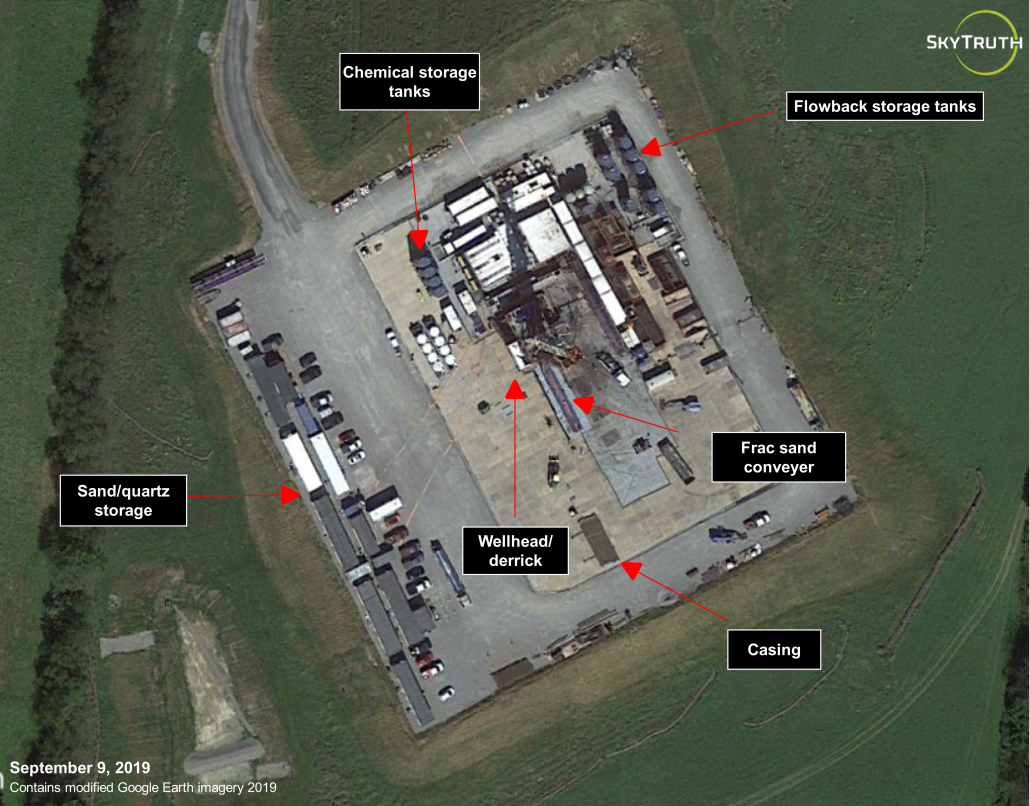 Anatomy of a fracking site

In the following time-lapse animation, drilling, stimulation, and the construction of wastewater holding tanks occur over the course of about six months. Once the rock formation is sufficiently fractured (usually only taking three to four days), fracking equipment may be moved off-site while flow collection materials are moved in. Flowback fluid will begin to rise out of the well and needs to be processed to extract the oil and gas. While many oil and gas companies claim their wells can produce for decades to come, independent investigation has challenged this optimism and shown a significant gap between predicted and actual production as a well ages. When a wastewater container fills, the well is actively returning flowback fluid and oil or gas production is underway.

Drilling and stimulation. Hydraulic fracturing start dates reported between 11/12/19 and 12/27/19 for each well (click on image to see changes)

These massive containers have been a primary area of concern due to their lasting presence in a well pad site long after initial stimulation, posing contamination risks. As more oil is extracted, wastewater might be injected deep underground off-site or processed and reused in future fracking jobs. Note that there are two types of storage used in this site – a larger rectangular fluid impoundment in the north and a newer style holding tank in the south. Studies have shown that while impoundments are more susceptible to spillage, both types of storage present significant health and environmental risks to surrounding areas. The containers at this site remain filled to this day seven months after fracking was completed. 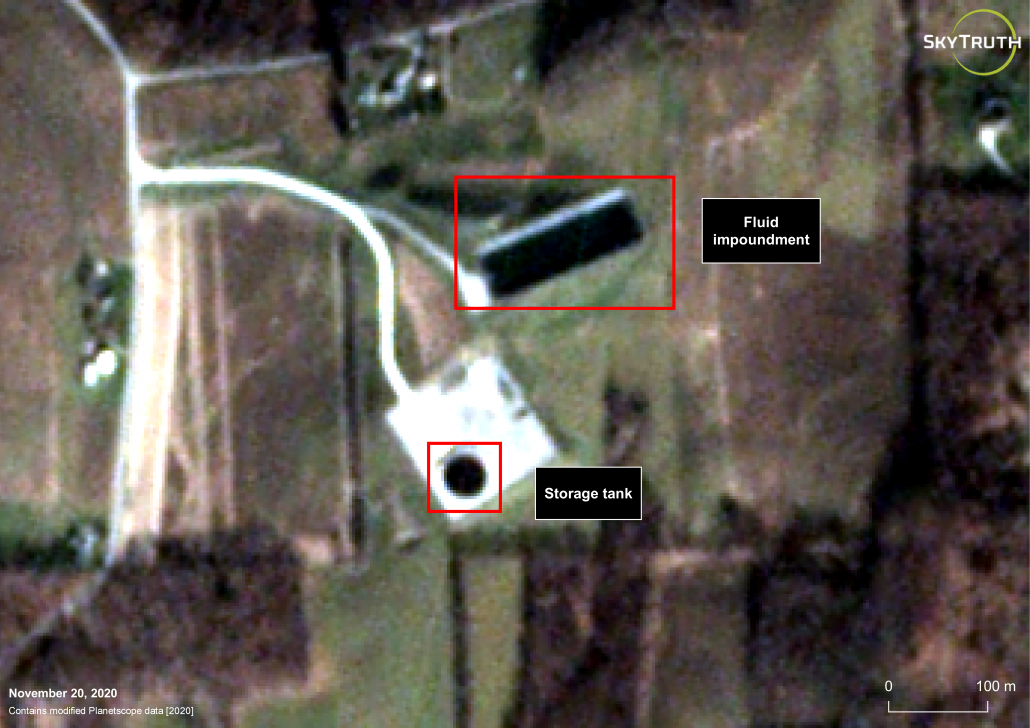 Where the site stands today

It should be pointed out that no two fracking sites will look the same. We can expect to see a wide variety of site layouts that cater to the specific requirements of the job. For example, compare the following development of Anderson Facility 9-59-31-SESW in Weld County, Colorado with the previous time-lapse images. This project is an active site consisting of 19 wells. Drilling began February 3, 2020. Notice that the excavation and site preparation were completed nearly two years before drilling occurs, whereas the Butler County site was prepped for drilling just a few months before.

Another drilling site in Colorado

By studying the physical evolution of well pads with satellite imagery, we hope to garner a clearer understanding of how fracking is spreading across the world. My work with machine learning has taught me that it is crucial to comprehend the variety of forms a fracking site (or other areas of interest) may take when developing training data. Developing a good model requires at least a basic comprehension of what’s going on visually over time.

You can refer to SkyTruth Alerts to receive real-time updates on fracking projects in areas you care about, as well as analyze new developments with a range of satellite imagery similar to what’s presented above. If you’d like to learn more about the role that SkyTruth is playing in documenting the expansion of hydraulic fracturing in the United States and abroad, please visit our newly renovated website, hover over the “Issues” tab and select “Hydraulic fracturing.”

How Cerulean detects polluters at sea
Scroll to top