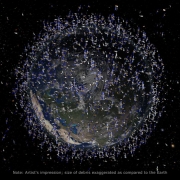 SkyTruth powered through the many challenges of 2020 and emerged with new skills and tools to protect the Amazon, the oceans, and more.

As SkyTruth wraps up a challenging year, I want to share with you all the progress our team has made in 2020. First, a bit of background: in early 2019 we announced Conservation Vision, our initiative to use machine learning (ML) to automate the analysis of the ever-growing archives of satellite imagery. These days it encompasses most, if not all, of our data science team’s work. In October, we hosted a webinar to showcase some of the exciting tools coming out of our Conservation Vision initiative. Now, I want to follow up with a slightly deeper dive into those tools and their potential impacts — along with a few other exciting developments from 2020.

We’re tremendously excited to have been chosen as one of the winners of Conservation X Labs’ Artisanal Mining Grand Challenge. Our effort, Project Inambari, uses a combination of radar and multispectral satellite imagery to identify and track unregulated and illegal mining deep in the Amazon rainforest.

Small-scale mining for gold in the Amazon has grown precipitously in recent decades. Miners scour waterways and separate tiny flecks of gold from sediment with toxic mercury, devastating broad swaths of river and forest habitat. The mercury poisons fish, wildlife, and drinking water for thousands of Indigenous people downstream. Because it’s unregulated or illegal — and usually occurs in remote parts of the forest — there is little reliable data on the location of mining operations. And that lack of information makes it difficult for enforcement agencies and conservation groups to shut down operations at an early stage. Satellite remote sensing can help.

But satellite imagery faces a particular challenge in the Amazon: high cloud cover for significant portions of the year obscure activities on the ground from multispectral satellites such as Landsat 8 or Sentinel-2. So, we’re using an approach that combines the cloud-piercing capabilities of Sentinel-1 radar imagery with multispectral information from Landsat 8 and Sentinel-2. We’ve also partnered with researchers at Wake Forest University and the Center for Amazonian Scientific Innovation (CINCIA) to incorporate their drone imagery of mining sites, and their on-the-ground knowledge of mining activities, into our approach. 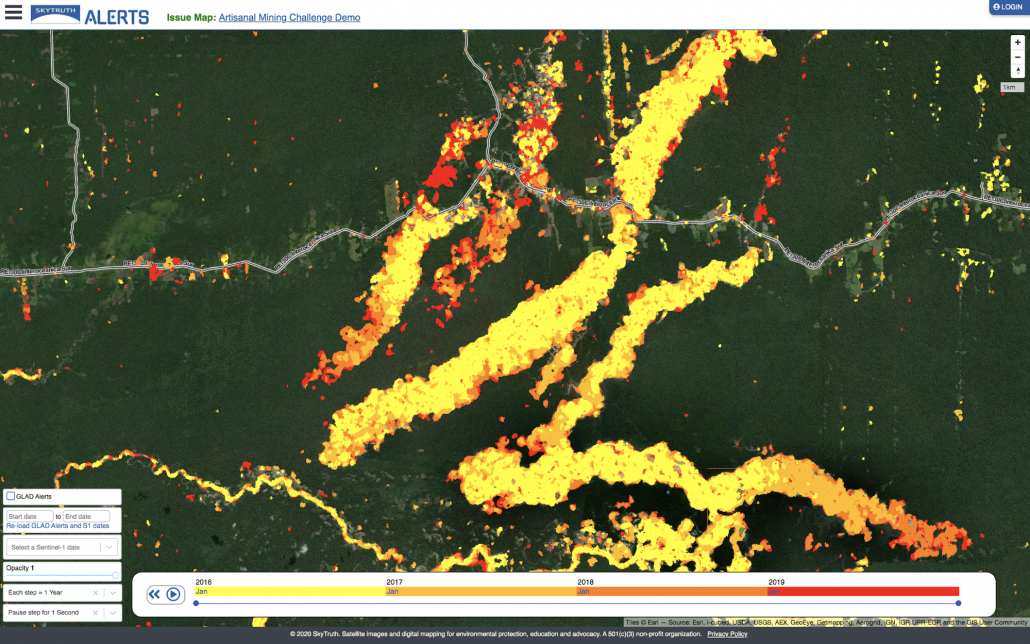 By combining radar and multispectral imagery in Google Earth Engine, we’re able to generate monthly maps showing where mining is located, regardless of cloud cover. We’re making the data publicly available to activists, government agencies, and others through our Alerts platform (more on this below), and working to expand our analysis across the entire Amazon.

Our work to monitor bilge dumping in the world’s oceans took a big leap forward this year. This type of pollution occurs when cargo vessels and tankers illegally dump oily bilge water into the ocean. Bilge water forms in most modern cargo and container vessels from the heavy oil they use for fuel. This oil produces a thick, oily sludge that drains into the bottom of the vessel and needs to be emptied regularly.  International law specifies how bilge water should be treated to protect ocean ecosystems. But SkyTruth has shown that many ships bypass costly pollution prevention equipment by simply flushing the bilge water directly into the sea. And they routinely get away with it.

Previously, SkyTruth analysts examined satellite images manually to detect the telltale dark slicks trailing behind vessels. But with support from AWS, we’ve automated our workflow for identifying bilge dumps from vessels, enabling us to analyze thousands of satellite images every day. We call this effort Cerulean. And with our recent addition of Automatic Identification System (AIS) broadcasts to the processing pipeline, we’ll be able to identify the vessels potentially responsible for the slicks that our model identifies.

We’ve been focused on identifying bilge dumps from moving vessels, and we’re working to add leaks and spills from offshore infrastructure and vessel anchorages. Even with these new classes added into our model, we’re still missing a lot of slicks. We rely on the European Space Agency’s Sentinel-1 radar satellite for Cerulean because it’s free and easy to access in AWS. But most of Sentinel-1’s coverage is along coastlines and near-shore areas, not the open ocean. In fact, we’re only seeing about 1.5% of the oceans every day. Even though we’re only seeing a small portion of the world’s oceans, we found 164 oil slicks over Cerulean’s first 30 days. As more and more satellites are launched, creating data for ever larger areas of the oceans, Cerulean will help us to detect even more bilge dumping — everywhere it occurs.

To make that happen and stop this illegal, but apparently routine, pollution, we’re working with commercial imagery providers to gain access to more satellite radar imagery and cover larger swaths of open ocean. We’re also developing  partnerships with coastal nations, enforcement agencies, prosecutors, and public campaigners to make sure that the intelligence produced by the Cerulean pipeline is used to stop polluters. So, keep checking our blog — we’ll be posting updates as Cerulean progresses.

SkyTruth has been mapping the extent of surface coal mining in Central Appalachia for more than five years, and this project has entered an exciting new phase.

Mountaintop mining is an incredibly intrusive and destructive method of resource extraction. Operators first clear-cut native forests before using explosives to remove soil and bedrock, exposing the coal seams beneath them. This material is then deposited into neighboring valleys and streams, in what are called valley fills.

The landscape-scale disturbance caused by mountaintop removal mining creates serious barriers to the recovery of native Appalachian forests. Although mine operators are required to set aside bond money to restore the landscape to its original condition after mining operations are finished, these efforts are often inadequate — or mining companies go bankrupt — and the burden for additional reclamation falls on states and local communities. 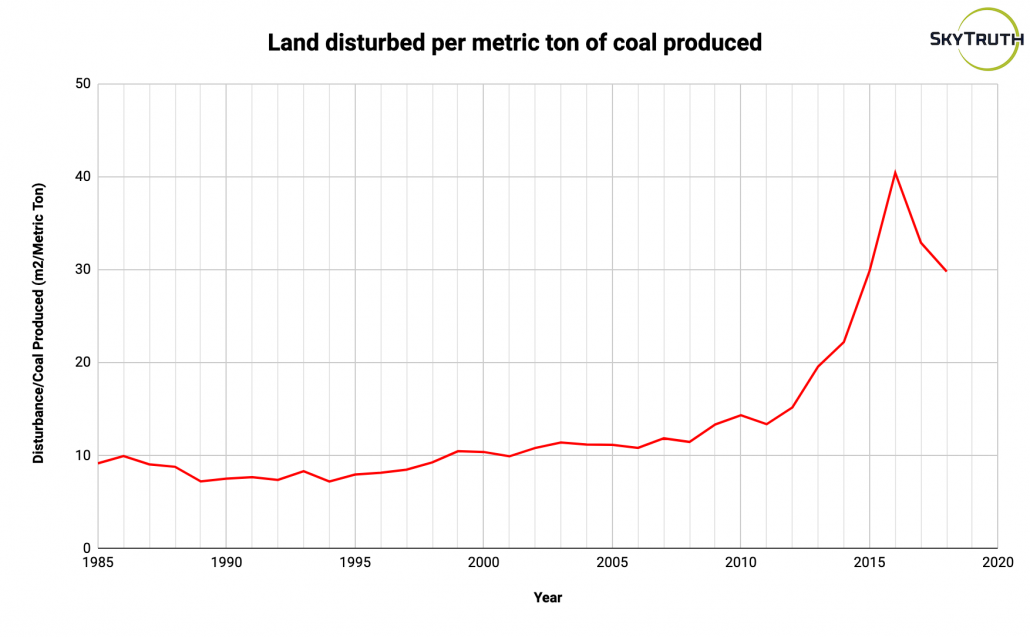 We’re using deep time-stacks of satellite imagery to assess whether restoration is actually taking place. We’ve used Google Earth Engine to aggregate spectral metrics for all central Appalachian mine sites from 1984 onward using Landsat imagery. Once sites are no longer active, they are compared to reference forests located in the same ecoregion. And by comparing the spectral signatures of former mine sites to those of nearby healthy forests we can track and measure the effectiveness of different reforestation practices.

Over the last year, we’ve been collaborating with Professor Joseph Ortiz’s lab at Kent State University (KSU) to implement a novel water quality analysis that identifies harmful algal blooms using Google Earth Engine. Harmful algal blooms (HABs) affect every coastal and Great Lakes state in the United States. Usually, algae are harmless, but under the right conditions, they can grow out of control, and some of these blooms can release toxins that kill wildlife and make people sick.

SkyTruth has been working with Dr. Ortiz to automate and scale his lab’s technique for detecting cyanobacteria (blue-green algae) in Lake Okeechobee in Florida and in the western basin of Lake Erie — both known hotspots of harmful algal blooms.  But waters like Lake Erie are complex — different types of algae, cyanobacteria, suspended sediment, and other aquatic material can make it difficult to pull the signal (the cyanobacteria that causes problems) out of the noise (all of the other stuff). The KSU method makes it possible to separate out these different components. 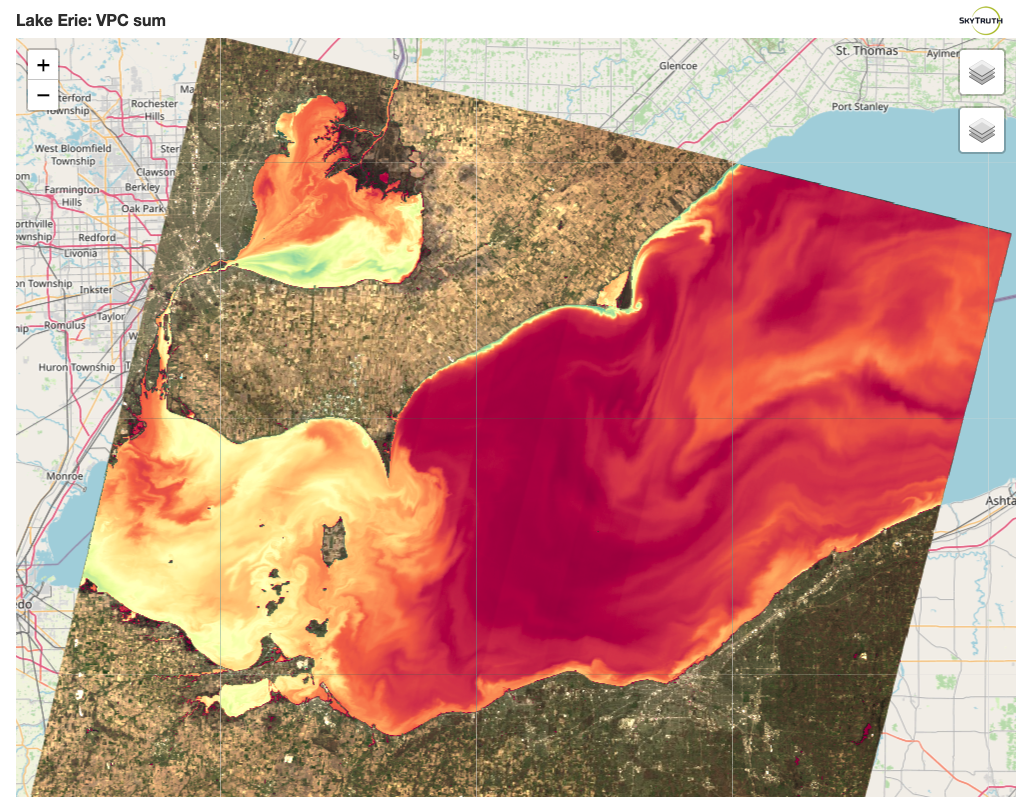 But the KSU spectral decomposition method wasn’t optimized to deploy in the cloud, meaning that each image had to be downloaded and analyzed locally. We’ve implemented the KSU spectral decomposition method in Google Earth Engine, making the method more accessible to other researchers, easier to update and modify, and easier to scale-up to run on entire collections of satellite imagery, rather than just one at a time. Check out Brendan Jarrell’s recent blog post about this project for more details.

SkyTruth has been monitoring hydraulic fracturing (fracking) since our founding almost 20 years ago. These days, we’re applying ML techniques to automate the detection of oil and gas drilling sites — speeding up the process and vastly increasing our capacity to detect changes on the ground. We’re testing this approach on the Patagonian and Andean steppe of Argentina in partnership with the Wildlife Conservation Society (WCS).

The steppe and its wildlife face a number of  threats, but perhaps the most immediate is the construction of more than 25,000 miles of oil and gas exploration roads that have exposed previously inaccessible areas to poaching. To make matters worse, public information about that vast network of roads, drilling sites, and pipelines is incomplete and unreliable. And this makes it difficult for conservationists to accurately assess the scale and intensity of the risk to threatened and endangered species. SkyTruth is using ML models to search through the satellite imagery archive available in Google Earth Engine to find drilling sites, roads, and pipelines missing from the existing data.

We’ve focused our efforts on the Neuquén basin – one of the most important oil and gas producing areas in Argentina. One of WCS’s key goals in the region is to understand how the number and distribution of wells, roads, and pipelines has changed over the past decade in order to improve their conservation planning work with the Argentine government going forward.

Fracking sites detected by our machine learning model in Patagonia.

You can follow the step-by-step details of our ML workflow in our three-part blog series. Our most recent model returned precision and recall metrics of 67% and 75%, respectively. This means that 67% of the locations we’re predicting as drilling sites actually are drilling sites, but we’re only picking up 75% of the drilling sites that are actually out there in the world. We’re adding more training data and tuning the model, but we’re also in the process of adding another class—roads—to make things a bit more interesting. Be sure to check back soon for updates.

Many skytruthers are familiar with our SkyTruth Alerts platform. It provides an easy way for anyone to subscribe to an Area of Interest (AOI), and then receive alerts whenever we find certain environmental incidents, such as a new drilling permit, a hazardous chemical spill, or a change in land cover, in those areas. 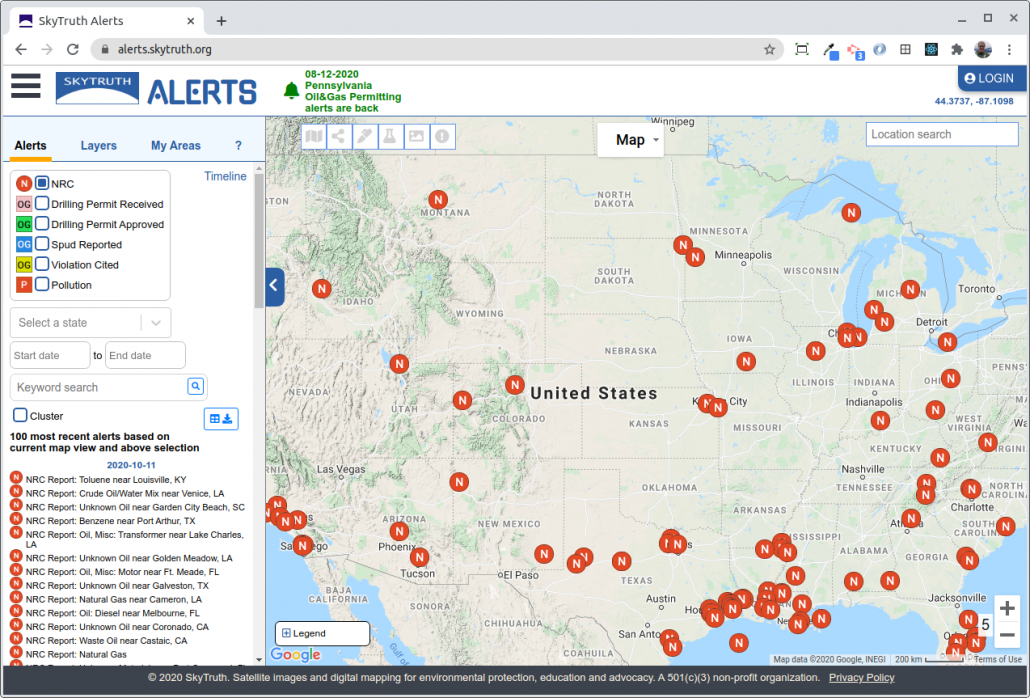 We’ve designed Alerts so that people can create issue-specific maps by selecting only the features and data that they want to see. We’re also using Alerts as a platform for both Project Inambari and Cerulean.

We’re using some new libraries to help power our Project Inambari map. Our model outputs were pretty big datasets of “suspected mining” polygons. For some years, the outputs contained close to 90,000 change polygons — quite a bit more than our web mapping engine could render in the browser. So, we switched over to using the same mapping technology that our friends at Global Fishing Watch use to process and render very large datasets.

Our Cerulean map also helped to give Alerts an upgrade. Until now, an alert had to be identified as a single point on the map.  But the ML processing pipeline we built detects the outline of a slick — usually a polygon. By making it possible for any shape to be an alert, we’ve paved the way for future Conservation Vision projects to use the Alerts platform. This also allows us to add some new data streams to the Alerts platform — like new oil & gas lease sales from the Bureau of Land Management (BLM) — that we haven’t been able to leverage before.

As you can see, we’ve got a lot of exciting things happening at SkyTruth. Many of our projects are moving into the production phase, and we’re seeing users make meaningful conservation impacts with the tools that we’re building. Make sure that you subscribe to the blog and to our social media accounts so that you can keep track of all of the exciting developments. Please consider making a donation to help us continue this important work in 2021!