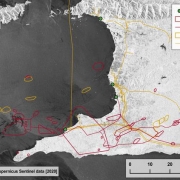 More than two years ago, former SkyTruth intern Rhiannon English wrote a blog post about an oil spill in Trinidad and described the challenges of answering one of the most frequently asked questions in the field of environmental monitoring: who’s to blame?  Identifying polluters is the first step towards holding them accountable, and at SkyTruth we typically apply a variety of geospatial technologies centered around satellite imagery to accomplish this. But Rhiannon noted that more comprehensive documentation of what is actually happening on the ground can be a great complement to satellite imagery. And so she created a map of the offshore infrastructure in Trinidad and Tobago to help identify sources of oil spills in the region. Fast forward to today and Rhiannon’s work digitizing oil and gas field boundaries, platforms and pipelines is proving to be a key resource in my own effort to investigate recent events afflicting the area.

Although many people might not realize it, the small two-island nation of Trinidad and Tobago located off Venezuela’s east coast has been involved in the fossil fuel industry for over a century, first as a former colony where British prospectors found rich oil reserves and started drilling before 1900. This initial spark propelled Trinidad and Tobago into rapid industrialization during the 20th century, as they developed the infrastructure needed to extract, refine, and transport fossil fuels worldwide. The export of these fuels (first crude oil and more recently liquified natural gas) has generated substantial wealth for the nation, and the abundance of fuels also enabled domestic manufacturing of petrochemical products such as ammonia and methanol for export. The value of these petroleum-based exports reached $10 billion as of 2018, and decades of this revenue has made Trinidad and Tobago one of the wealthiest countries in the Caribbean.

Trinidad and Tobago has invested deeply in infrastructure to continue extracting and transporting oil and gas. The map below illustrates the miles of pipelines connecting platforms on offshore oil and natural gas fields to refineries and ports across the island, as well as an oil slick around an area with several platforms roughly 15 kilometers (about 9.3 miles) from the coast. More oil and gas fields exist off Trinidad’s east coast and are not pictured below. 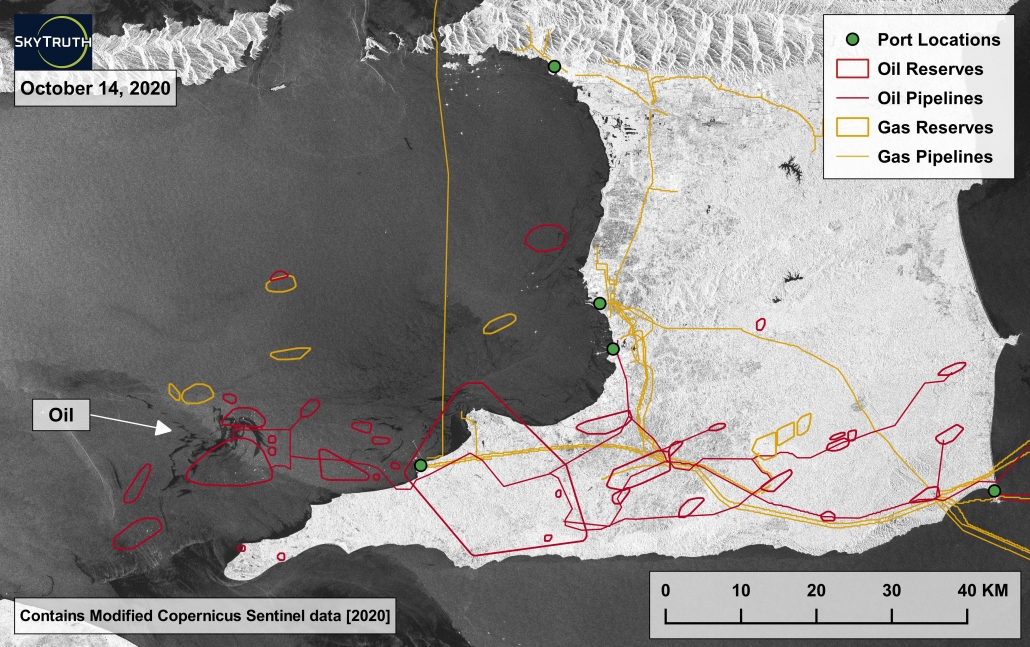 Trinidad’s oil and gas transportation network from offshore fields (“reserves”) to ports. Oil platforms (bright spots) and slicks (dark streaks and patches) are visible in the Gulf of Paria on this Sentinel-1 radar satellite image.

Some more examples of oil platform leaks take place off the east coast of Trinidad in a group of three oil fields: Samaan, Teak, and Poui. These reserves were discovered and developed in the 1970s. As of 2017, the trio produced 14,000 barrels of crude oil per day. These assets are owned by three companies: Anglo-French oil company Perenco owns a 70% share, and state-owned companies National Gas Company (NGC) and Petrotrin both own 15% shares. While this collective ownership makes transferring permits and sharing profits easy, it complicates accountability and litigation. 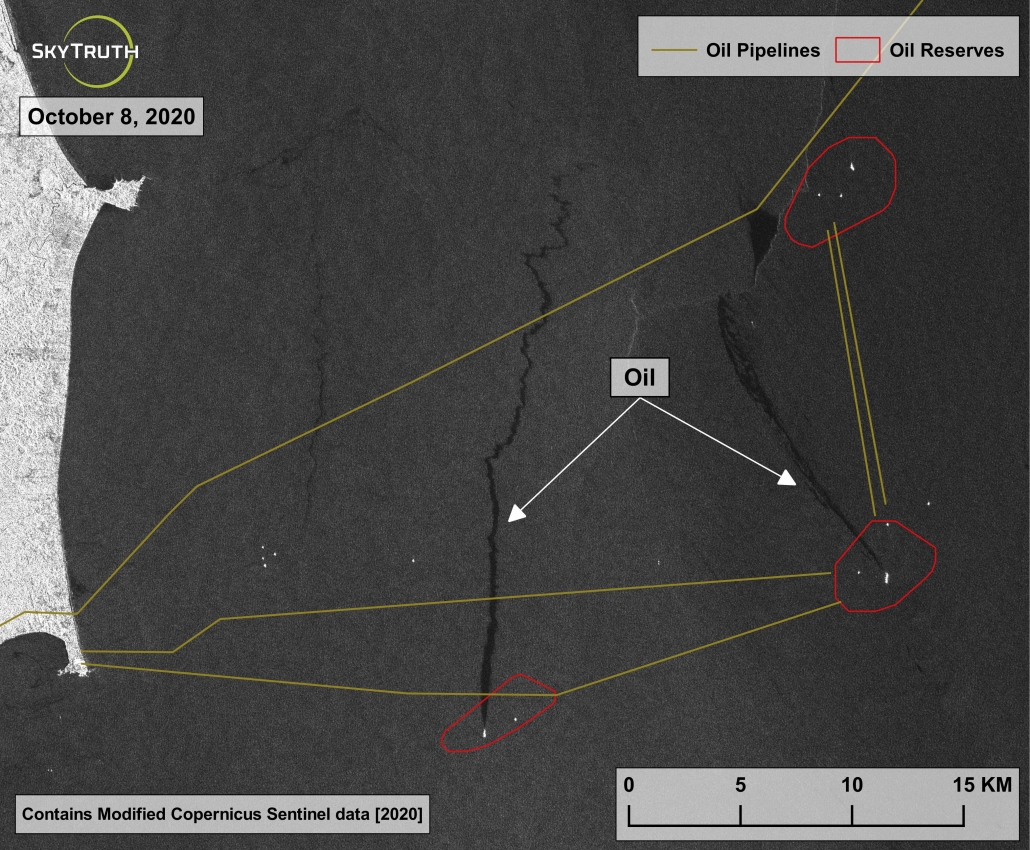 Slicks such as these are common in this region, with at least some sign of oily residue visible on many of the images we’ve reviewed in this area. While most of these slicks get little to no attention due to their relatively small size and recurring nature, the following slick that appeared to emanate from the Teak platform in September was of an alarming size, and certainly out of the ordinary: 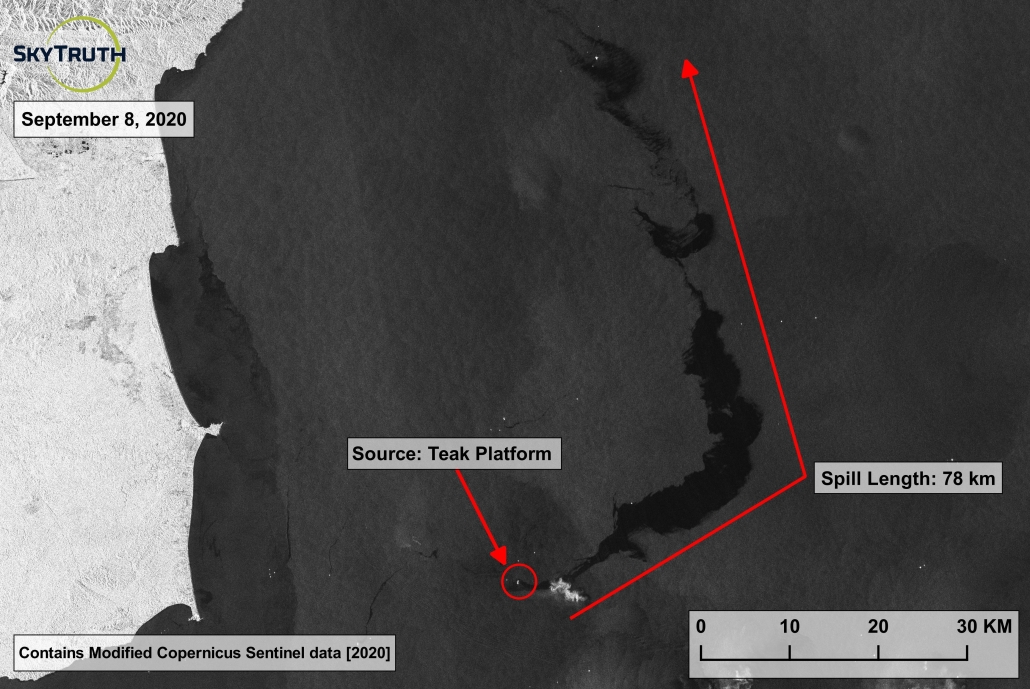 This slick apparently originating near the Teak platform on September 8 extends nearly 80 kilometers (almost 50 miles) along the east coast of Trinidad. 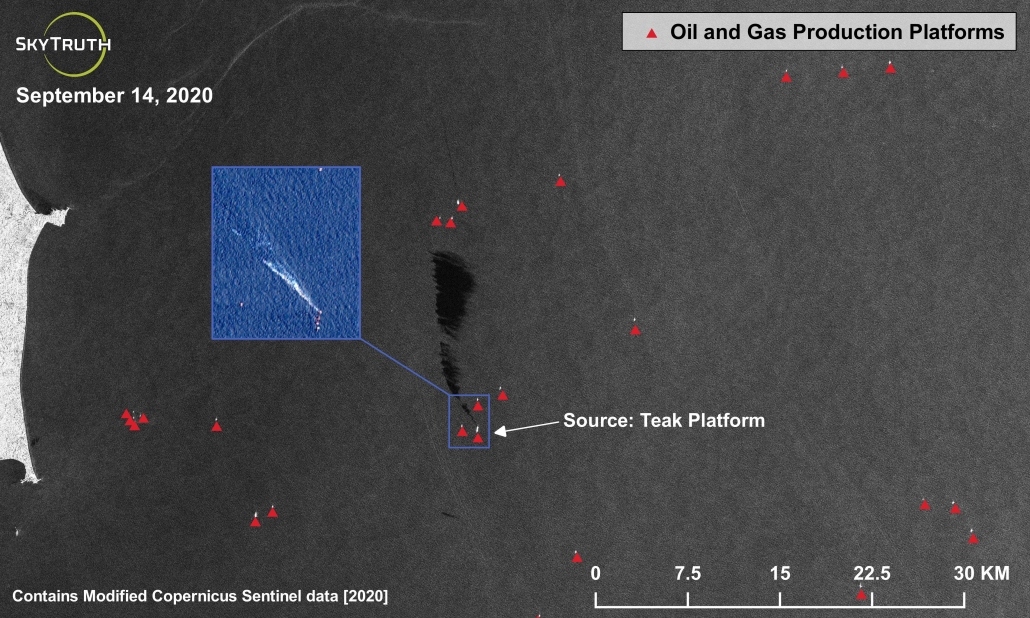 The Teak platform apparently leaking oil again on September 14 as captured by both Sentinel-1 and Sentinel-2 (inset) satellite imagery.

Satellite imagery revealed oil apparently leaking or being discharged from the same location less than a week later, suggesting that this platform may present a chronic pollution problem. While there is the possibility of natural seepage of oil from the ocean floor, we’ve never seen slicks this large attributed to any known natural seeps. This kind of spill isn’t an isolated incident either. Off the west coast of the island, the Gulf of Paria shared between Trinidad and Venezuela has been a hotspot for oil residue around offshore platforms for years. Sentinel-1 imagery from August reveals oil slicks on the surface corresponding to the locations of platforms and related oil fields in an area called Soldado owned by Petrotrin. Satellite images routinely reveal oily slicks in this area, but the image below captures multiple slicks across a region of nearly 900 square kilometers (almost 350 square miles) — definitely not a typical occurrence. This suggests that oil infrastructure in the region is leaking badly and is poorly maintained. 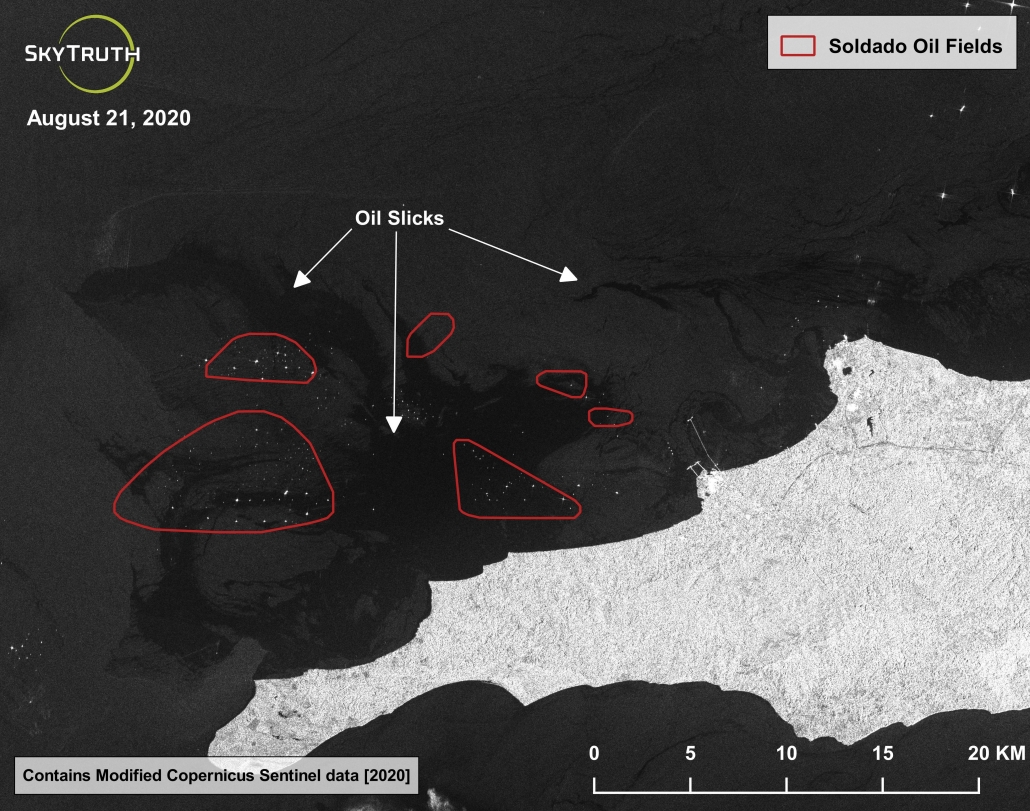 Several visible oil slicks around the dozens of platforms in Soldado oil fields in the Gulf of Paria.

Both the Soldado location and the Petrotrin company have infamous pasts. In 2018, The Energy Year reported that Petrotrin tried to abandon a leaking well in the region that had already dumped 100 barrels (4200 gallons) into the sea. In addition, a report from a Hungarian National Emergency and Disaster Service detailed multiple leaks in the pipelines running from Soldado to shore, spilling an estimated 30 barrels (1260 gallons) of oil into the Gulf. In 2018, Petrotrin was broken up into four subsidiary companies after the government ended its operations because it was $12 billion in debt. This led to the closure of the country’s only crude oil refinery located at Pointe-à-Pierre, reducing the energy independence the country had enjoyed since production began. For the first time in a century Trinidad and Tobabo needed to import oil for gasoline, diesel, and jet fuel.

While private companies and the Trinidad government are currently struggling to reach a new partnership to reopen the Pointe-à-Pierre refinery, Petrotrin’s degrading offshore infrastructure doesn’t seem to have an easy fix either. The offshore assets are now held under the name of Heritage Petroleum Company, which has plans to increase production in the Soldado area.  But while they are inheriting the profits of Petrotrins’ wells, they are also inheriting the problems of their leaking infrastructure.

Later that same day in August, a different pass of the Sentinel-1 radar satellite captured more evidence of oil in the Gulf of Paria. Similar to before, there are significant slicks in the Soldado reserve region around the platforms and pipelines. A major difference — in just a matter of hours —  is the presence of a 20 kilometer (about 12.5 miles) long slick that appears to be coming from a vessel. After querying the coordinates of the vessel to find its unique Maritime Mobile Service Identity (MMSI) as well as name and flag, I tracked the Automatic Identification System (AIS) signals that the vessel broadcasted at this time and location and charted its course over the time it spent in the area. The vessel, a Spanish liquified natural gas tanker called Catalunya Spirit, came into the area earlier that day, then spent several hours idling and circling 15 kilometers (about 9.3 miles) from the coast when it seemingly dumped oily wastewater at around 22:00:00 UTC (Coordinated Universal Time), and then approached Point Fortin early the next morning, probably to load its liquified cargo. It’s possible this image illustrates a “tank-washing” incident as the operators flushed oily residue out of the vessel’s cargo tanks before picking up the next load for shipment, although there may be other explanations for this large slick. 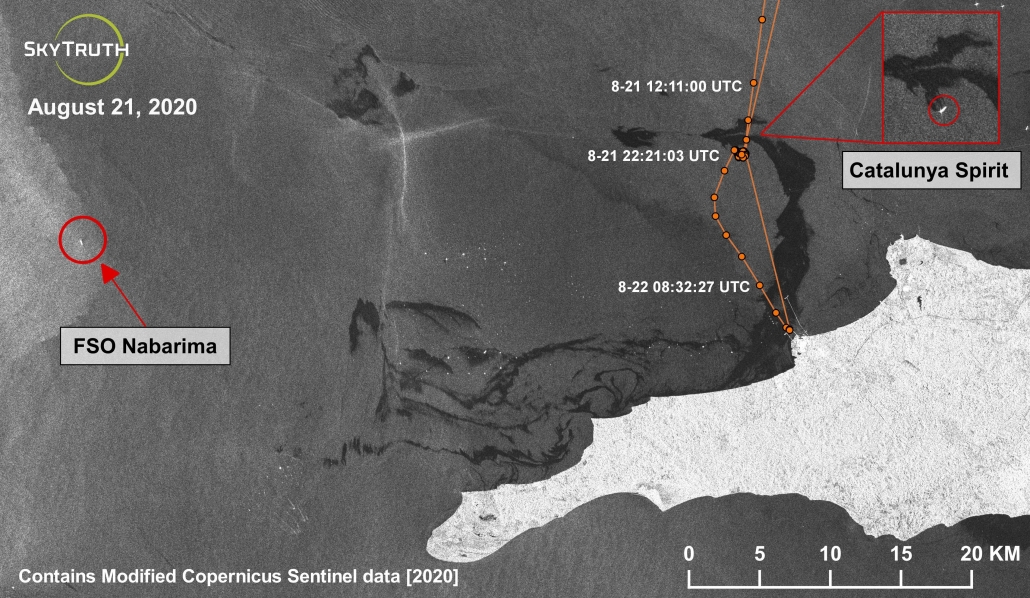 Sentinel-1 image captured at 22:18:00 UTC showing streaky oil slicks around offshore platforms, as well as a large slick apparently emanating from the Catalunya Spirit (see the red outlined inset map for an enlargement of the slick around the vessel). The orange path and timestamps indicate the Catalunya Spirit’s track as determined by AIS data. To the west, the FSO Nabarima, a damaged Venezuelan tanker storing 80 million gallons of crude oil, awaits help.

The Venezulean FSO Nabarima also pictured above has garnered a lot of media attention in recent months after photos of the vessel listing heavily to its side circulated on social media. The stationary tanker has been floating with 80 million gallons of crude oil on board after the United States government imposed sanctions against Petróleos de Venezuela (a state-owned oil company and the owner of the tanker), preventing its export. Authorities from Trinidad and Tobago recently inspected the tanker and claimed it was not in danger of suffering additional damage or capsizing. So the concern now shifts to the process of unloading the oil safely to the Venezulean shore to avoid a major oil spill.

While this attention to the Nabarima is warranted given the sheer amount of oil onboard the vessel, in reality petroleum has already been plaguing the ecosystem and the livelihoods of those who rely on it for years. In the 2018 report of a leaking pipeline in the Gulf, a fishing association president stated that with every oil spill, fishermen have to brace for loss of fish stocks, saying “[w]e are already dealing with piracy and crime on the high seas. Petrotrin needs to sort out this and pay the fishermen for the losses. We have no fish to hold in our waters.” As a result of poor corporate responsibility and an economy entrenched in fossil fuels, the lasting burden of these spills has historically been placed on the environment and those directly connected to it such as those fishermen. Trinidad and Tobago will face an uphill battle in the coming years to change this narrative, but it is nonetheless achievable through greater accountability and action from both companies and government.