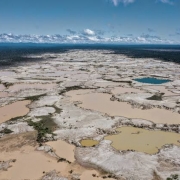 SkyTruth and partners at Wake Forest University and the Center for Amazonian Scientific Innovation win funding for a public map platform to track mining in the Amazon.

In southeastern Peru the eastern slopes of the Andes have been known as a gold producing region going back to the time of Incas. There, wild torrential rivers drop down in narrow gorges from the high Andes before feeding into the broad meandering tributaries of the Amazon. For millennia these waters have carried tiny flecks of gold which have slowly accumulated in river banks and soil.

This gold now places at risk one of our planet’s most remote and biodiverse rainforests. In the past few decades thousands of migrants have come to this once isolated region hoping to escape poverty with work in informal gold mining operations which have spread out from the muddy banks of once pristine rivers into the dense tropical forest. While gold has brought prosperity to some, the consequences for local communities have been severe. They include large scale devastation of natural habitats and contamination from the mercury used in extracting gold. This contamination now poisons fish and people who have long depended on the river for sustenance.

On September 30, SkyTruth, along with its partners at Wake Forest University and the Center for Amazonian Scientific Innovation (CINCIA) were selected as a winner at the Artisanal Mining Grand Challenge for our proposal to develop a public map that tracks mining in the Amazon using satellite radar imagery. We call this effort Project Inambari after one of the rivers in the region that has been particularly devastated by illegal and unregulated gold mining.

My interest in a monitoring project in this area began in 2017, when I had a chance to travel to the city of Puerto Maldonado in Peru’s southern jungle and see for myself the devastating consequences of illegal mining. A new highway connecting Peru’s highlands and Pacific coast to Brazil had opened up the area to a flood of migrants looking for better pay in areas made newly accessible for mining and logging. Environmental devastation, crime, and forced labor attracted global attention to the area — even a visit from Pope Francis in January 2018. During my visit I was able to connect with researchers at CINCIA who were beginning to tackle the daunting question of how to restore a landscape stripped of topsoil and littered with toxic pools.

At SkyTruth, we approached this challenge by exploring how radar satellite imagery could detect illegal mining activities in vast, remote, and often cloudy rainforest areas. SkyTruth has worked extensively with satellite radar for two marine applications: mapping offshore infrastructure and detecting slicks from vessels dumping oily bilge at sea. I was intrigued when I found a demonstration of automated land cover classification using the same satellite radar source, Sentinel-1 from the European Space Agency. I showed this to SkyTruth Geospatial Engineer Christian Thomas. Christian leads SkyTruth’s effort to map the expansion of mountaintop removal mining in Appalachia. In the Amazon, radar has the advantage of penetrating the frequent clouds that cover the forest during the rainy season and make it difficult to monitor using optical imagery. Christian was able to get promising results using the same classification methods to show the expansion of mining in the Madre de Dios region of southern Peru, where the Inambari River meets the Madre de Dios River.

Then, in January 2020 we learned from one of our colleagues at the Wildlife Conservation Society about the Artisanal Mining Grand Challenge, an opportunity to win support for innovative technology projects addressing artisanal mining. We decided to enter our proposal for a satellite radar-based detection map.

Watch a video of SkyTruth’s Bjorn Bergman explaining the inspiration for Project Inambari and what we hope the project can accomplish.

For the initial March 2020 ASM Grand Challenge deadline we prepared a written application detailing how our public monitoring map proposal could protect biodiversity, water quality, and human security in addition to outlining our plans for technical development, adoption, and financing. Much of our inspiration comes from the impact we have seen from the Global Fishing Watch map, which offers near real-time tracking of fishing activity around the world. And so at the core of our proposal we wanted to have a free public map showing mining activity. Software developer Dan Cogswell has produced the Project Inambari map, based on SkyTruth’s Alerts platform. Our map prototype allows you to play a timeline of detected mining, view and compare activity from one month to another, and overlay changes with satellite imagery. Future work will allow users to receive email alerts when new mining activity is detected in their areas of interest.

We were excited to learn on June 4 that, out of 90 teams, we had been selected to move on to the semi-finalist round. Each of the 26 semi-finalist teams produced a ten-minute pitch video discussing their proposal, potential users, and the impact we wanted to have. You can watch our team explain how Project Inambari will monitor for mining in SkyTruth’s pitch video below.

Then, on August 17 we were notified that we were one of 11 project teams that would compete for funding in the final round of the Artisanal Mining Challenge.

One of the most interesting aspects of the competition process has been viewing proposals from many different groups — including university researchers, nongovernmental organizations, and entrepreneurs — to tackle the diverse environmental and social issues associated with artisanal mining around the world. The innovations included fascinating recovery strategies like phytoremediation (using plants to pull heavy metals out of polluted soils) and proposals for in-depth supply chain monitoring. We were particularly interested to see the work put forward by researchers at Wake Forest University and CINCIA (based in Madre de Dios, Peru) for a database of known mining sites to use as training data for a machine learning model. In addition, CINCIA is leading efforts to find ways to recover lands devastated by mining and to monitor and evaluate these areas with drone imagery. It was clear that their proposals would complement the ideas that we had for developing a public map showing mining activity, so we decided to join forces in the finalist round.

You can see Christian and Jorge Caballero, a GIS analyst at CINCIA, discuss some new developments with the mining detection model in the video below, and the potential to integrate CINCIA’s high resolution drone imagery for training and validation.

The video also briefly discusses the development of an email alert system where authorities or local communities can receive notifications when our model picks up new mining activity in an area of interest. The map already shows some interesting changes, such as how mining activity shifted to a legal mining corridor and to more remote areas such as the Pariamunu River following the Peruvian government’s Operation Mercury, which ramped up government action against illegal mining.

Finally, our team gathered virtually at the Conservation X Labs Innovation Summit on September 30 for a final round of live questions from the Artisanal Mining Grand Challenge judges. The next morning we had the honor of hearing from Jane Goodall. She summed up the difficult quandary posed by artisanal mining, stressing both the great threat posed by mining to ecosystems and human livelihoods but also her realization that any attempts at habitat conservation would fail unless local people could find sustainable alternatives for making a living. All the teams then waited anxiously as prizes were given out. Project Inambari was chosen as one of five winners with a $118,000 prize.

With this support from Conservation X Labs and our new collaboration with researchers at Wake Forest University and CINCIA, we are excited to kick off the next stage of development of the Project Inambari map. It’s been inspiring to be part of the challenge competition along with so many great teams and a real honor to have Project Inambari selected as a winner.