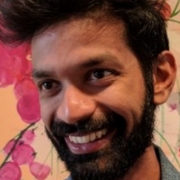 Darshan Karwat wants to put social and environmental justice at the heart of engineering.

Darshan Karwat thinks big. Really big. Like as big as the cosmos. Or like reinventing an entire profession. So he asks a lot of questions. Questions that challenge conventional thinking. Questions that many people have never even thought about.

Darshan is an Assistant Professor in the School for the Future of Innovation in Society, College of Global Futures at Arizona State University (ASU).  He’s also a SkyTruth board member.  At ASU, Darshan runs re-Engineered, which his website describes as “…an experiment in an interdisciplinary engineering profession that embeds social justice, peace, and ecological holism at the very heart of technical design and decision making.”

When I asked him what this means, Darshan provided an example: He said he believes that most engineers choose their profession to make a positive difference in the world. But when they leave school, job opportunities are limited, often focusing on work that makes the most money such as weapons systems or drilling and mining for big corporations. This can cause  some engineers to leave the profession and others to just take these jobs regardless, because they studied engineering and need to make a living. They might not admit that somewhere along the way they lost their passion for their work.

“That’s not to say that some amazing work isn’t happening,” he says. “But I do feel that as engineers we might be telling ourselves the work we do is making the world a better place. When it comes down to it, is that actually true?  Is it? Are we having the beneficial impact we claim that we’re having?”

Darshan notes that the world we live in has largely been created by, designed by, and built by engineers. Therefore, the world that we desire — one that is just for all people, environmentally sustainable, and peaceful — is going to have to be built as well, and engineers should be at the heart of it. How can engineering promote these things? One way, according to Darshan, is to stop doing work that promotes weapons production and technological development that leads to violent conflict and horrible pollution.

Another way is to consider design. Darshan wants to include people who traditionally have been excluded from the design process.

“I think we should ask during the engineering design process: In what ways does this design actually promote social justice and not injustice?” he says. For example, instead of designing phones or electric cars for people with a lot of money to spend, what if we design them for people of modest means?  What about electric vehicles for people who can’t afford the latest Tesla? “To what extent do we care that people in inner city Detroit have access to electric cars?” Darshan asks. “If that’s a goal, it influences how we design cars.”

Then there’s space. Darshan earned his Ph.D. in aerospace engineering and environmental ethics from the University of Michigan and has been fascinated by rockets, space, and stars since he was two years old. He is still fascinated and hopes one day to do more in aerospace engineering.  Amidst the current discussions about going to Mars he asks: “Who is that for? I do believe that what goes on beyond the earthly realms ought to be for all of us. It’s something that inspires all of us. If so, then in what ways are we designing space systems or policy for everyone rather than just as a playground for the wealthy?”

He notes that we haven’t really asked people how space matters to them, but cites the Hubble telescope as an example of aerospace engineering that likely benefited everyone. According to NASA, in the 30 years since its launch, Hubble has made more than 1.4 million observations, sent back stunning images of stars, galaxies, and other astronomical objects, and deepened humanity’s understanding of the cosmos.  In contrast, Darshan notes that many visions for the future of space travel rely on privatizing space, not on the ways in which space is for all of our imaginations.

So how does an aerospace engineer who dreamed of space as a boy growing up in Mumbai, India lead a movement to reshape an entire profession? Darshan says he was sensitized to environmental issues early on because of the poor air quality in Mumbai. As an undergraduate at the University of Michigan he became an environmental student activist. And he became aware that a lot of what we know about what’s happening on earth comes from satellites. For his senior project, he helped design an earth imaging orbitor.

When the time came for graduate school he chose a project related to climate change; namely, the combustion chemistry of biofuels (an alternative to fossil fuels). Then, a class on the history of science and technology triggered his thinking about the values people bring to science and engineering. And so his doctoral dissertation also looked critically at engineers in the biofuel and aviation industries and their motivation, asking engineers basic questions such as:  Why are you doing this?  And how are you doing this? His work explored how engineers view climate change: It is just another  technological problem to solve? Or is it something completely new and different?

After completing his Ph.D., Darshan moved  to Washington, D.C., as an American Association for the Advancement of Science (AAAS) Fellow. There, he worked on low-cost air sensors and climate resilience at the Environmental Protection Agency and on ocean wave energy devices at the Department of Energy before heading to ASU.

Darshan characterizes his team’s work as aspirational and nascent (he started at ASU in 2017). He established Project Confluence to work with communities and ask key questions about the challenges they face, particularly as they relate to environment, climate, and energy. Right now, his small team (a postdoctoral fellow, a graduate student, and an undergraduate) is also working collaboratively with a community group on understanding the intersection of air pollution, energy justice, and social justice in historically marginalized parts of Phoenix. Through geospatial analysis, his team is taking data that is generally inaccessible to the public, analyzing who is being burdened with environmental harms, and exploring what community assets might be mobilized to address those harms. He’s given several presentations to community stakeholders taking his team’s research directly to the people who asked for it. Darshan talking about the role of engineering in society during the opening of re:Engineered’s public art installation called “When Mental Walls Lead to Physical Walls.” Photo by Tanya Harrison.

His lab is also asking broader questions to understand the potential for scaling up community-based engineering. That is, how can more engineers actually do community-based, environmental and social justice work?  Darshan notes that existing programs helping engineers find this kind of work are too small.

“Why aren’t hundreds or thousands of engineers across the US doing this kind of work?” he asks. “When you look at lead pollution or air quality around industrial facilities, fracking across Pennsylvania and elsewhere, the scale of the energy transitions required in rural and urban communities in the US…that’s the scale of the challenge, and that points to the number of engineers needing to engage. And how do we design a financially viable system of engineering and science to serve a community in Appalachia or Lubbock, Texas, or elsewhere where there’s opportunity for this?”

To that end, his team has been surveying engineers. Darshan thinks they’ve identified five primary reasons why scientists and engineers aren’t doing environmental and social justice work. Time and money are part of it. But they’ve discovered that engineers often don’t feel equipped to do this kind of work, even when they want to. They see it as outside their skill set or comfort zone. Or, they look at the world in a totally different way from the communities they would serve, making it difficult to collaborate. His team has a paper coming out soon in the journal Earth’s Future elaborating on these findings.

In addition, Darshan is a coordinator of the Constellation Prize to recognize engineers and their collaborators working for environmental protection, social justice, human rights, and peace.  (Nominations close October 31, 2020.)

Lastly, Darshan leads SkyTruth’s Opportunities Committee to help our board think creatively about how SkyTruth can engage different kinds of partners, ask different kinds of questions, and push us in new directions. One of the things that excites him about working with SkyTruth is learning how space-based data informs our ability to protect the Earth.  “Seeing that unfold is super inspiring,” he says. “Super super inspiring.  What SkyTruth is doing is really cool and needs to happen more, needs to be supported more.”

At SkyTruth, we’re thrilled to have Darshan as part of our brain trust. We believe we are contributing to his vision by providing engineers and others the opportunity to create a greener, healthier, more just world, and innovating new approaches to using satellite data to accomplish this. Our internships give advanced undergraduate and graduate students real world professional experience and energize them to make the world a better place. But as Darshan notes, plenty of other opportunities exist —or can exist —for engineers to do good in the world. They just have to think big.

And ask a lot of questions.