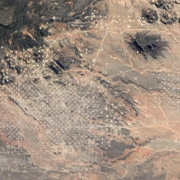 [This is the final post in a 3-part blog series describing SkyTruth’s effort to automate the detection of oil and gas well pads around the world using machine learning. We hope that this series – and the resources we’ve provided throughout – will help other developers and scientists working on conservation issues to learn from our experience and build their own exciting tools.  You can read the two previous posts in the series here and here.]

SkyTruth Intern Sasha Bylsma and Geospatial Analyst Brendan Jarrell explained how we create training data and implement a machine learning model to detect oil and gas well pads. So, now that we’ve got a trained model, we just need to run it on a few satellite images and put the predictions on a map.  Seems easy enough…

We started with some Sentinel-2 imagery collected over the Neuquén Basin in central Argentina. This is one of the most heavily drilled areas in Argentina, and we’ve used the Google Earth Engine platform to export a few Sentinel-2 images that we could work with.

Screenshot of the Neuquén basin in Argentina.

The images come out of Earth Engine as GeoTIFFs – a pretty standard file format for overhead imagery. We’ve used some Earth Engine magic to reduce the file size of each image so that they’re easier to handle, but they’re still a bit big for the model. The model expects simple, small patches of images: 256 pixels high, 256 pixels wide, and three channels (e.g., Red, Green, Blue) deep. Our Sentinel-2 GeoTIFFs are about 11,000 pixels high by 11,000 pixels wide, so that left us with a few things to figure out:

These were all things that we’d never done before, so it’s taken us quite a bit of trial and error to figure out how to make things work. In fact, we’re still working on them – we’ve got a workflow in place, but we’re always trying to refine and improve it. For now, let’s just look at what we’ve got working.

Step 1. Converting our GeoTIFF to a NumPy array

We started off with a pretty small subset of a Sentinel-2 image that we could experiment with. It’s 1,634 pixels high, 1,932 pixels wide, and 3 channels deep. In developer’s parlance, its shape is: (1634, 1932, 3). The image is of Mari Menuco Lake in Argentina. There are a few dozen drilling sites along the southern portion of the lake that seemed like an ideal place to test out our workflow. Once we had everything working like expected, we’d run the larger Sentinel-2 images through.

First, we used the GDAL Python API to load our image and collect its (a) geotransform and (b) projection. So, what are these two things? Well, basically, the geotransform is the formula that GDAL uses to go from pixel space (think rows and columns) to geographic space (think x [longitude] and y [latitude]), and the projection is just the coordinate reference system of the image. After we had those two pieces of information set aside for later, we pushed all of the image bands into an NumPy array.

GDAL reads and writes images differently than NumPy, so the last thing we did was transpose the axes to put our image in the format that we needed: height, width, channels.

Our second problem: we also needed to keep track of where each patch lived in the larger image so that we could put the predictions back together in the right order later. We ended up giving each patch an ID and collecting the coordinates of their top-left pixel (their minimum x and minimum y). We pushed that information into a pandas dataframe – basically, a 2-D matrix of rows and columns – that we could set aside to rebuild our prediction image later.

Many thanks to CosmiQ Works and all of the participants in the SpaceNet Challenges; the code snippets and GitHub repos that they’ve made available were immensely helpful for us as we tried to figure out how to implement this step.

Side by side comparison of an image and its prediction.

We used the pandas dataframe that we made earlier to put all of these predictions back together in the right order and get the original image’s size and shape. The dataframe was where we recorded the ID and top-left pixel (their minimum x and minimum y) of each patch. First, we created an empty image that is the same size and shape as the original. Next, we went through the dataframe, took out each patch, and added it to the new empty image in the right spot (its top-left pixel).

Most of our team are visual thinkers, so the easiest way for us to imagine rebuilding the image is like covering a blank sheet of white paper in pink sticky-notes, and then smoothing them all down to get a new, blank sheet of pink paper.

Step 4. Converting our predictions to polygons

After rebuilding our prediction array to be the same size and shape as the original satellite image, we used the GDAL Python API to convert it into polygons that could go on a map. To try and clean things up a bit, we started by selecting only those pixels where the model was more than 70% confident they belonged to a drilling site. We set anything under that threshold to zero. This just helped us to eliminate some noise and clean up the predictions a bit. With that done, we used GDAL to convert the cleaned up prediction image into polygons and reattach the spatial information that we set aside at the beginning (i.e., the geotransform and the projection).

And at this point we had our shapefile. From there, it was easy to upload that shapefile as an asset into our Earth Engine account and have a look at our predictions over satellite imagery. We did a bit of clean up and editing to make sure that all of the polygons look good — what’s sometimes called “human-in-the-loop” modeling — but, for the most part, we were all done.

Screenshot of the polygons in EE.

Precision, recall, and F1-score are all just metrics for understanding how a model performs. Your spam folder offers a good example. Imagine that your email’s spam model makes 30 predictions. Precision would measure the percentage of emails flagged as spam that it correctly classified as spam. Recall would measure the percentage of actual spam emails that it correctly classified as spam. Often, these two things are in tension – if the model is more aggressive (i.e., lowers the threshold for an email to be classified as spam) the recall will go up since they’d be capturing more actual spam emails. But the precision would go down, because they’re also capturing more emails overall, and it’s pretty likely that many of those won’t be spam. The F1-score builds off of precision and recall, and it’s probably easiest to think of it as a measure of overall accuracy. In the context of the drilling site work, our precision and recall numbers mean that 68% of the things we’re predicting as drilling sites actually are drilling sites, but we’re only picking up 56% of the drilling sites that are actually out there in the world.

We hope that this series has helped to demystify the machine learning workflow for others. Figuring out how to build a machine learning data processing pipeline from scratch was an exciting challenge for us. We’re encouraged by our progress so far, but as the metrics above indicate, there’s still lots of room for improvement. We will keep at it because this technology stack — integrating remote sensing with cloud computing and machine learning — is at the heart of our Conservation Vision initiative to automate the analysis of imagery, to solve challenging conservation problems.

So please stay tuned for updates in the future.  And don’t hesitate to send us a note if you have questions about what we’ve done or ideas about how we can improve things going forward.  We welcome the collaboration!

Matthew Ibarra’s Final Project Was His Favorite
Scroll to top