Photo by skeeze on Pixabay
Blog - Latest News
You are here: Home1 / Biodiversity2 / SkyTruth Visualization and App of Drilling Near Chaco Canyon Available... 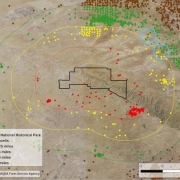 The Bureau of Land Management has permitted intensive oil and gas drilling around Chaco Culture National Historical Park, threatening a landscape that supports one of the most important cultural sites in the world.

Reminders of an ancient civilization dominate the desert landscape in northwestern New Mexico. Ruins of massive stone “Great Houses,” once several stories high with hundreds of rooms, remain at Chaco Culture National Historical Park. Their complexity and numbers reveal that a sophisticated culture thrived in this place a thousand years ago. Descendants of those native peoples — today’s Pueblo tribes and several Navajo clans — say that Chaco was a central gathering place where people shared ceremonies, traditions, and knowledge. Yet much about Chaco remains a mystery. During the late 1200s, construction of buildings and monuments slowed and the Chacoan people moved from the area. However, Chaco is still considered to be a spiritual and sacred place by many Native Americans.

Parts of Chaco were first designated as a national monument by President Theodore Roosevelt in 1907. Eighty years later the United Nations recognized the monument as a World Heritage Site because of its unique cultural significance. Despite these protections, the area surrounding the park is now threatened.

Over the past two decades, the federal Bureau of Land Management (BLM) has allowed oil and gas companies to drill hundreds of wells within 15 miles of the park using the technique known as hydraulic fracturing, or fracking. Fracking typically creates air and noise pollution, threatens water supplies, increases truck traffic on local roads, and harms communities with toxic chemicals. SkyTruth’s data on fracking in Pennsylvania has been used by scientists at Johns Hopkins University to demonstrate some of the harmful health effects associated with fracking.

Many tribal groups have voiced concerns about the spiritual, cultural, physical and health impacts from drilling in the area. In September of 2019, the U.S. House of Representatives approved the Chaco Cultural Heritage Area Protection Act that would create a 10-mile buffer zone on federal lands around the park to prevent any future leasing for oil and natural gas drilling. Although the entire New Mexico congressional delegation supports this legislation, the Senate has not taken action on this bill. Reportedly, the bill does not have Republican support in the Senate, which substantially reduces its chances of becoming law under the current majority.

To illustrate the extent of drilling in recent years, SkyTruth created an animation of wells surrounding Chaco Culture National Historical Park by illustrating data from New Mexico’s Oil Conservation Division as well as using the most current imagery from  the U.S. Department of Agriculture’s National Agriculture Imagery Program (NAIP) as a backdrop. (See “About the Data” below to learn more about how we did this.) The visualization shows the growth of wells throughout the region surrounding the park, with distances from the park boundary delineated. New wells have emerged throughout the region in this time period, from the park boundary to 15 miles and beyond. The region within 15 miles of the park now contains 33% more oil and gas wells than it did in 2000 — an increase of 367 wells.

Despite local opposition and congressional action, the BLM currently is proposing additional leasing for drilling around the park. The public comment period for input on this leasing plan has been extended to September 25th, 2020. (Click here for information on how to submit comments.)

In addition to the animation of drilling build out, SkyTruth has also created still images showing the changes around Chaco Canyon from 2000-2018. Each image highlights change in drilling activity for the year and features the most recent NAIP imagery from 2018 as a backdrop. 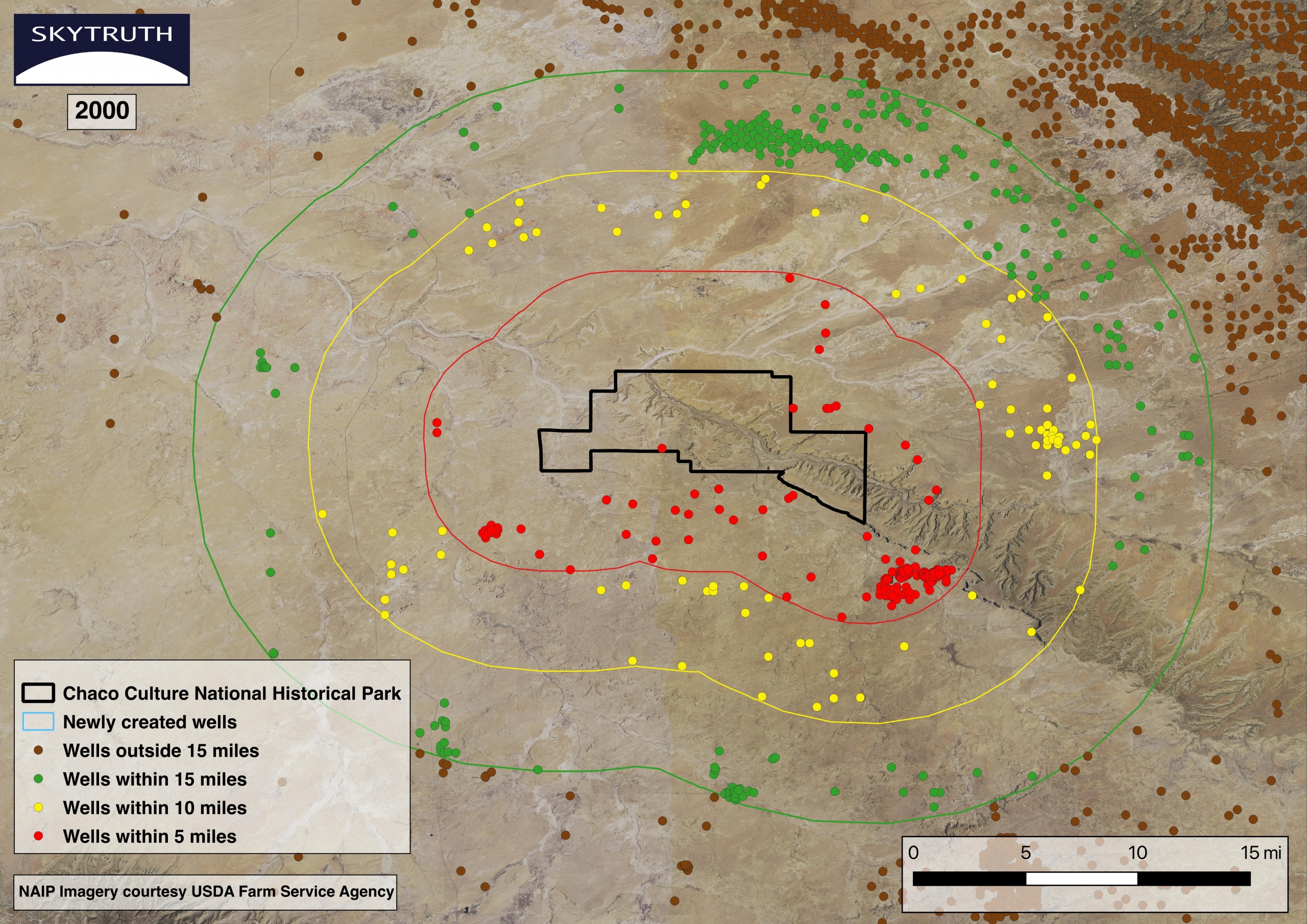 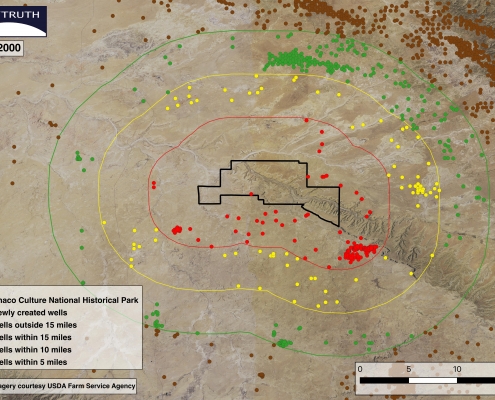 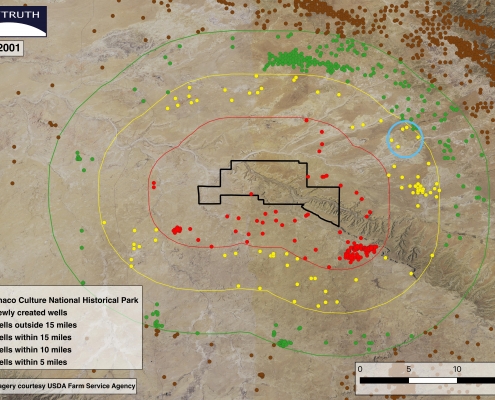 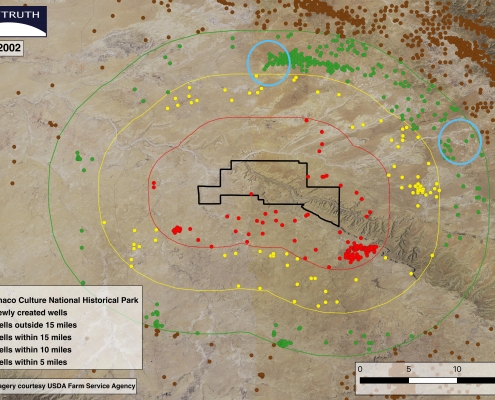 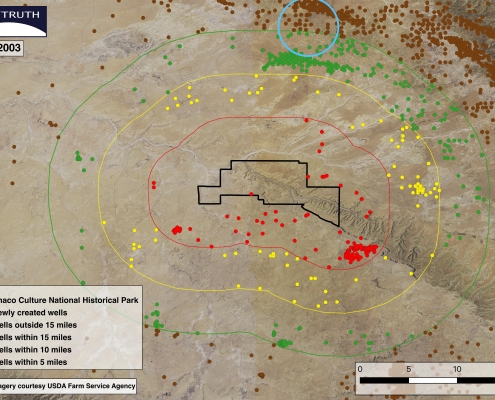 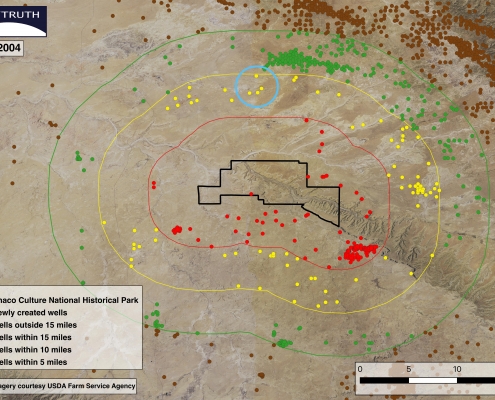 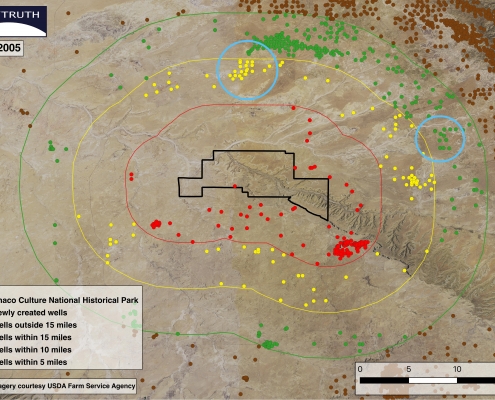 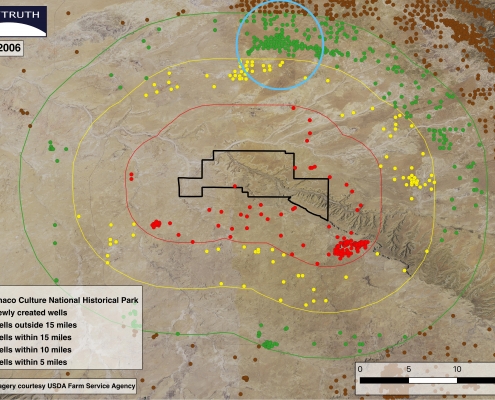 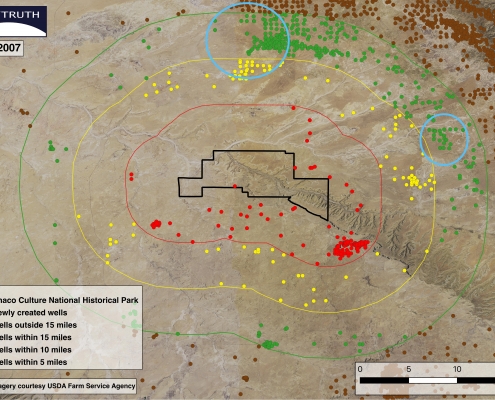 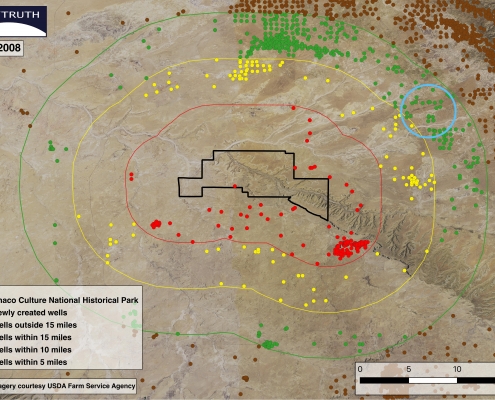 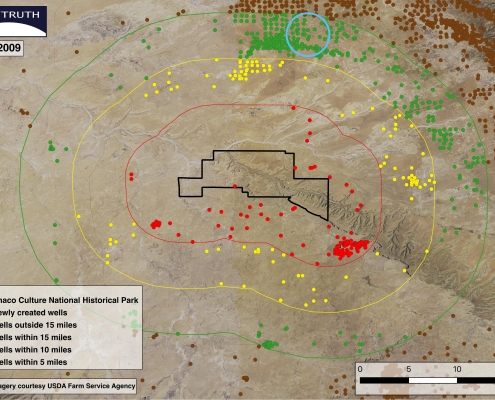 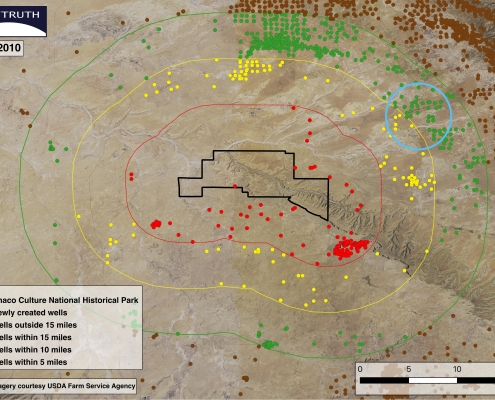 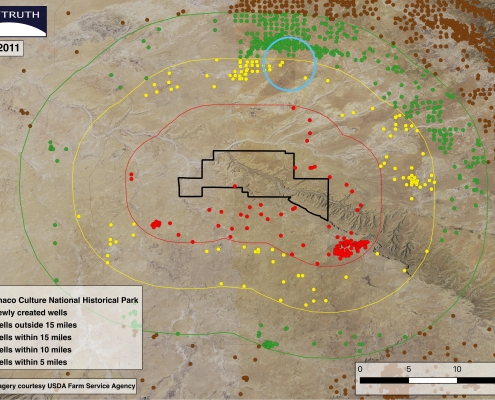 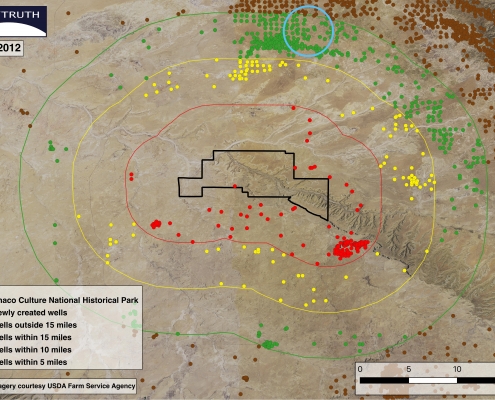 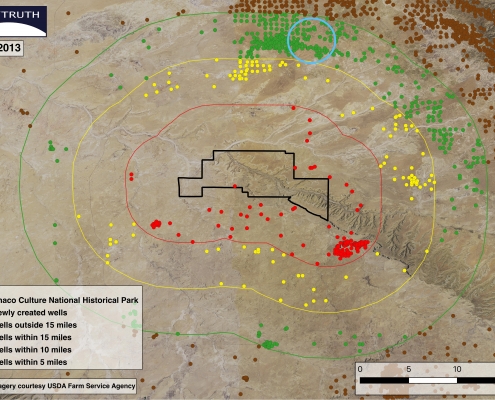 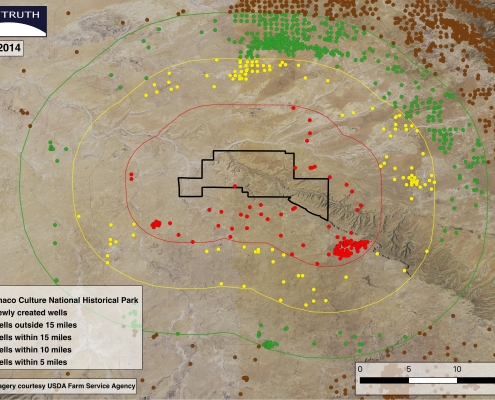 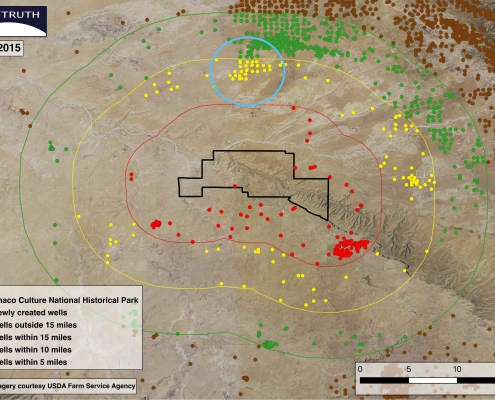 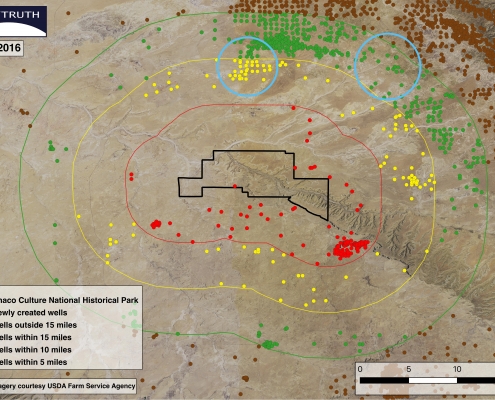 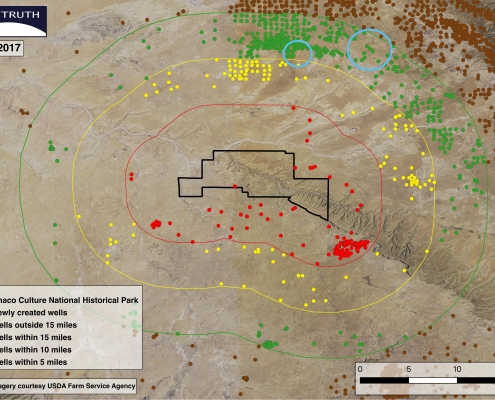 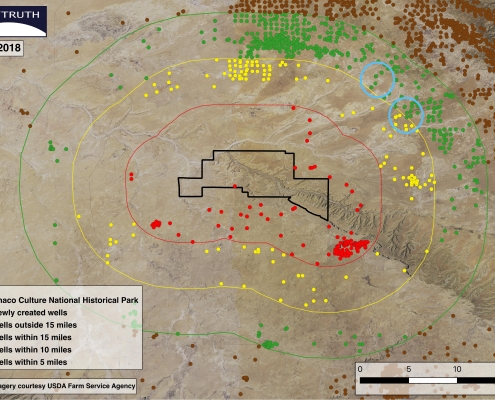 Still images for each year in the animation

SkyTruth also has developed an interactive app that allows users to view a map of the Chaco Culture National Historical Park and its surrounding area with all the surrounding oil and gas wells. Users will be able to click on a well pad to see more information such as the well pad identification or the status of the well, such as whether it is being plugged, or is still fully operational. (See “About the App” section below.) This app can be viewed here.

Chaco Culture National Historical Park is home to the largest and best preserved ancient architectural structures in all of North America. It was home to communities throughout the 1000s and remains important to Native Americans and others. Today, this magnificent region is becoming an industrialized area cluttered by oil and gas wells and threatens to harm the people who honor this place of heritage. SkyTruth hopes the visualizations and tools we’ve created will help arm activists, draw attention to the leasing process, and support congressional action to protect a remarkable place.

The data used to identify wells comes from New Mexico’s Oil Conservation Division. The link for this dataset can be found here, labeled Public FTP Site. This large dataset was analyzed to create buffer zones based on the distance to Chaco Culture National Historical Park. The dataset was used in QGIS — a geographic information system tool — alongside NAIP imagery exported from Google Earth Engine to create an accurate map of the data and wells. We used TimeManager, a plugin for QGIS, to create this visualization. TimeManager allows users to easily add data to the working map based on time. Wells were added to the working map by month starting from January of 2000 through September of 2019, creating over 200 still images. TimeManager also allows users to export these still images as frames to create an MP4 file. We then used Final Cut Pro to add an overlay over this MP4 and create a visualization with a legend, scale bar, and other necessary features.

The Chaco Canyon Well Inspector app allows users to pan and zoom around an interactive map and inspect each individual well around the Chaco Canyon area. Upon clicking an individual well point, data such as the well identification number (API number) and status becomes visible to the user. Users will be able to inspect the area surrounding Chaco Culture National Historical Park to see how the growing number of wells has impacted the surrounding area and gain a better understanding of the status of oil and gas wells in the area.

Update 9/9/20: The animation, photos, and Chaco Canyon Well Inspector app were updated to reflect the spud date at each site; that is, the date when wells officially broke ground for drilling.

Brendan Jarrell: Mentor for SkyTruth Interns and So Much More

Correcting Recent Reporting on Offshore Flaring in Guyana
Scroll to top
SkyTruth and/or its third party tools use cookies to monitor traffic in the aggregate on our websites and applications and to improve user experience. If you continue browsing, we'll assume you agree to the use of cookies. You can change your cookie settings at any time in your browser settings. Find out more in our privacy policy.