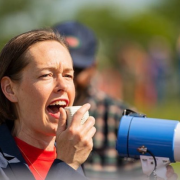 Mary Anne Hitt has led Sierra Club’s Beyond Coal Campaign to extraordinary national success. But she honed her skills in Appalachia, with a little help from SkyTruth.

You might say Mary Anne Hitt has Appalachian activism in her blood. When she was growing up in Gatlinburg, Tennessee (where she attended Dolly Parton’s former high school), her father was Chief Scientist at Great Smoky Mountains National Park. Back then, acid rain was decimating high elevation forests in the East, fueled by pollution from coal-fired power plants. Her father watched as iconic places in the park turned into forests of skeleton trees. He knew the science pointed to nearby power plants run by the Tennessee Valley Authority, and wanted to stop the pollution. But his warnings triggered some resistance from those who didn’t want to rock the boat. “So right from the start,” says Mary Anne, she was “immersed in the beauty and the threats” of protecting Appalachian forests. And she knew the costs of speaking out.

Those costs have never stopped her. Mary Anne graduated from the University of Tennessee, creating her own environmental studies major and forming a student environmental group that continues today. Later, she obtained a graduate degree in advocacy at the University of Montana. Now, she leads the Sierra Club’s Beyond Coal Campaign; a national effort to retire all coal plants in the United States, moving towards 100% renewable energy by 2030, while supporting economic opportunities in communities affected by plant closures.

As Mary Anne tells it, Appalachian Voices was fighting mountaintop mining and construction of a new coal plant in southwest Virginia. While fighting the plant, they discovered that 200 new power plants were planned across the country. In other words, a whole new generation of power plants was on the books to replace aging plants. A coalition of grassroots groups and local citizens, organized with help from the Sierra Club, worked to stop them, fighting permits at every stage, slowing the process down and making financial backers nervous. 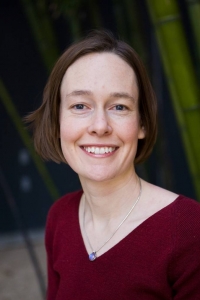 SkyTruth’s database helped support the broader advocacy work Appalachian Voices was spearheading to fight coal mining and power plants in the region. Collectively, environmental, legal, and grassroots groups nationwide stopped almost all of the proposed power plants, according to Mary Anne. (Ironically, the one in southwest Virginia actually did get built.) “If these plants had been built it would have been doom for our climate,” Mary Anne says now. “There would have been no room for renewables…Grassroots people working in their communities made it happen. That’s what makes me most proud.”

Mary Anne took her successful experience fighting power plants in Appalachia and brought it to the Sierra Club as Deputy Director of the Beyond Coal Campaign in 2008, later becoming Director. The Sierra Club has built on those early lessons and applied them to shutting down all coal plants in the United States. Today, 312 of 530 plants that existed in 2010 have retired or announced their retirement. And according to Mary Anne, the United States reached a promising benchmark a year ago: last April marked the first time we obtained more energy from renewables than from coal. In fact, in 2019 the US consumed more power from renewable energy than from coal for the first time in 130 years. “Most of our arguments now are economic,” says Mary Anne. “The power from a coal plant is more expensive than renewable energy, so people don’t want it. People will keep demanding renewables.”

In April of this year, Mary Anne took on an even bigger responsibility at Sierra Club – the National Director of Campaigns, a new position in the organization where she oversees all the organization’s campaign work. It’s a big job, on top of being a mother to her ten-year old daughter. So why did she agree to join the SkyTruth Board? “Ever since my daughter was born,” says Mary Anne, “I had a policy of not being on any boards because I have a demanding job and serving on boards was more time away from her. But I really believe that SkyTruth’s work is foundational for the environmental movement. I think the ability to see for yourself what’s going on, especially in this age of misinformation, where people don’t know what to believe… the ability to show people with their own eyes what’s going on, I think is more important than ever.”

She also knows from her years in advocacy that having access to technical resources and expertise is challenging for nonprofits, especially small ones. “To provide this to groups in a way that’s technically sophisticated, but they can use it, is a real service,” she says. And SkyTruth has had significant impact on key issues, she notes, particularly given its small size. “To the extent that I can help, I want to do that. And I love that they are based in West Virginia and Shepherdstown – it’s a cool part of SkyTruth’s story.”

But a professional life of activism involves a lot of conflict, Mary Anne acknowledges. To balance it out, she and her husband Than Hitt, a stream ecologist, sing and play guitar at local fundraisers and other community events. Than is a 10th generation West Virginian and they live in Shepherdstown, where SkyTruth is based. The local singing is all for fun she says.

“It’s a way to connect with people you wouldn’t otherwise… And having a creative outlet helps keep me whole.” With activism, “you’re living in your head a lot. Music is in your heart. We all need that.”

Right-sizing Our Data Pipeline to Detect Polluters
Scroll to top