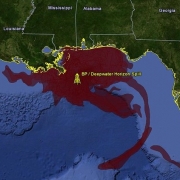 Ten years ago last week, BP’s Deepwater Horizon platform in the Gulf of Mexico exploded, killing 11 men and setting off the worst environmental disaster in U.S. history. SkyTruth was there; not in person but remotely; using satellite imagery to track the spill from space. Working with oceanographer Ian MacDonald, we estimated that the amount of oil gushing from the broken wellhead was more than an order of magnitude larger than the estimates provided by BP and the U.S. Coast Guard. By making our independent analyses available to the public, we generated national and international media attention, and created pressure on the federal government to create its own scientific task force to determine the true size of the spill. Their conclusion, months later, was even larger than our estimates, and set the stage for the billions of dollars that BP eventually paid to help restore Gulf ecosystems and economies.

Watch our four-minute video to learn more about the disaster, and what SkyTruth is doing now to stop oil pollution at sea.

Thanks to Thad Reid for helping us with this production.

Bilge Dumping at Sea: What are SkyTruth and others doing about it?
Scroll to top