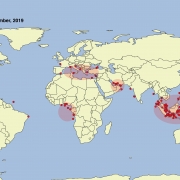 This is the first entry in a multi-part series revealing the significance of bilge dumping globally.

Update 12/1/20: You can read the second, third, and final posts in this series on SkyTruth’s blog.

Out of sight, beyond the horizon, lies a world of activity taking place in the sea. The ocean encompasses over 70% of the globe, yet most of us only see its edges from the coasts. We’ve built many of humanity’s largest and most advanced societies along coastal regions, yet because the ocean is so remote, much of what happens there remains mysterious.

You might think of crime at sea as violence (piracy), abuse of natural resources (illegal fishing), or pollution (oil spills). However, at SkyTruth, we’ve recently focused on combating another very troubling action on the water: a serious crime known as bilge dumping. While not as well known as pollution like the Great Pacific Garbage Patch, bilge dumping is a phenomenon that should not be overlooked, and yet it often is.

Bilge dumping occurs when a vessel illegally releases untreated, oily wastewater into the ocean. This wastewater, known as bilge, collects in the ship’s lower hull and needs to be emptied regularly. Since the 1970’s an international law known as MARPOL has required that bilge water be treated to remove the oil before the bilge can be legally discharged into the sea. When a vessel circumvents treatment and dumps directly into the ocean, its wastewater creates an oily slick on the water. Radar satellite imagery captures these distinctive slicks — dark and opaque — because oil smoothes the surface of the water. This dense oily slick lingers in the water until it’s broken apart by wind and wave action, dispersing toxins and globs of oil that can harm coastal communities and marine ecosystems. Vessel operators probably commit this crime as an act of convenience: to save money or time cleaning up after themselves, imposing on others the negative consequences.

SkyTruth has observed likely bilge dumping incidents around the globe many times since 2007. But in 2019, we started seeking out these incidents more systematically. We focused our daily monitoring efforts on some of the world’s major shipping lanes and on areas where we’ve found problems in the past, cataloguing every incident of bilge dumping we found through imagery. Our intent was to better understand the scope of this recurrent problem. We noted that when we went to look for oily slicks, we always found more! Unfortunately, we began to expect to see them; they were occurring somewhere within the areas we monitored almost every day. And our monitoring only covered a small part of the ocean.

In total, between January and December 2019, we found 163 slicks averaging 56 kilometers (almost 35 miles) in length. We almost always found bilge dumps using Sentinel-1 imagery:  high-resolution C-band Synthetic Aperture Radar satellite data made available by the European Space Agency. Although this imagery is sparse over the open ocean (see our blog post showing the coverage provided by these and other imaging satellites), it is collected regularly in coastal areas and provided coverage of several areas we considered likely to experience bilge dumping. Figure 1 documents each bilge dump incident we discovered, identified as red dots (note that because our monitoring was not covering the entire ocean, the lack of red dots in many areas on this map doesn’t necessarily mean those areas are free from bilge dumping). 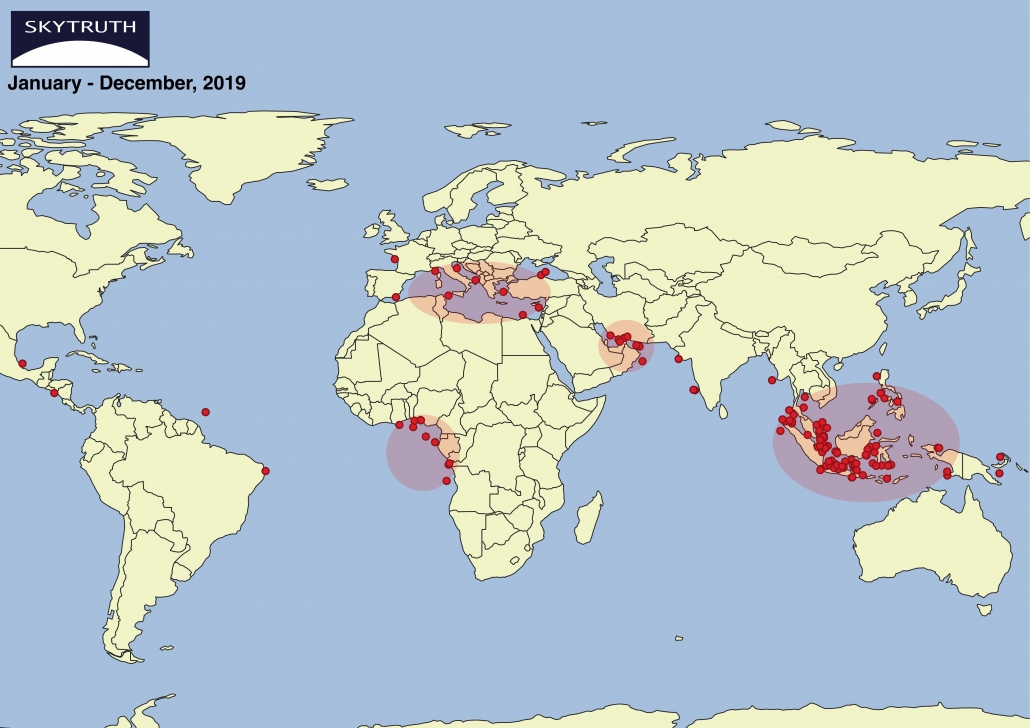 Our work suggests that bilge dumping isn’t sporadic; we repeatedly detected this illegal behavior in shipping lanes across the world, usually surrounding areas with significant energy development or active commercial ports, and often in areas with a “chokepoint” of marine traffic congestion. Bilge dumping was commonly seen in Southeast Asia, the Persian Gulf, and the Gulf of Guinea. Less frequently, but notably, we discovered it off the coast of Brazil, in the Mediterranean Sea, and in the Gulf of Mexico. In some cases, we have been able to identify the polluters, by correlating Automatic Identification System broadcasts (used to prevent collisions) from ships, with the time and location of oily slicks.

In 2020, SkyTruth is working towards automating this process so we can routinely monitor much more of the ocean. We plan to use machine learning techniques to scan available satellite imagery daily, with the hopes of identifying these slicks automatically. Near real-time detection will allow authorities and the public to respond as soon as they receive notice of the slick, meaning more perpetrators (who might still be nearby, or headed into port) can be caught, and timely actions can be taken to mitigate potential environmental harm. 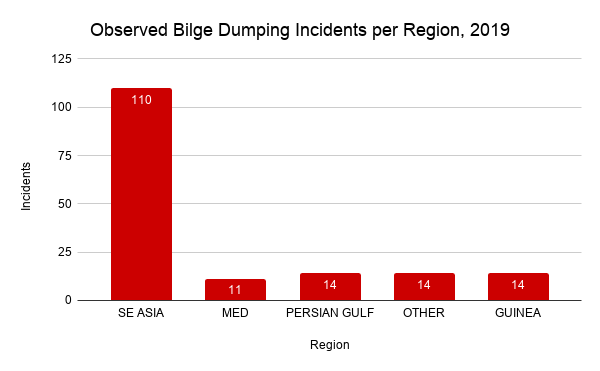 The next segments of this series will explore bilge dumping in more depth, including “Why should you care?” “How can this be happening?” and “What can be done about it?” We work as  space detectives —  investigating meticulously from above, revealing as much as we can down to the most pressing and actionable details. As we increase monitoring, automate the detection of offshore pollution with the use of machine learning, and raise public awareness, polluters will learn that they are being watched. We believe that more transparency leads to better behavior, better management, and better outcomes for Planet Earth. At SkyTruth, we are working to stop this illegal pollution by giving it the scrutiny it deserves.

SkyTruth 2020: What to Expect in the New Year