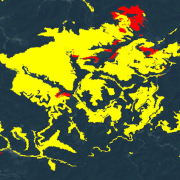 The area of Central Appalachia impacted by surface mining has increased — by an amount equal to the size of Liechtenstein — despite a decline in coal production.

SkyTruth is releasing an update for our Central Appalachian Surface Mining data showing the extent of surface mining in Central Appalachia. While new areas continue to be mined, adding to the cumulative impact of mining on Appalachian ecosystems, the amount of land being actively mined has declined slightly.

This data builds on our work published last year in the journal PLOS One, in which we produced the first map to ever show the footprint of surface mining in this region. We designed the data to be updated annually. Today we are releasing the data for 2016, 2017, and 2018. 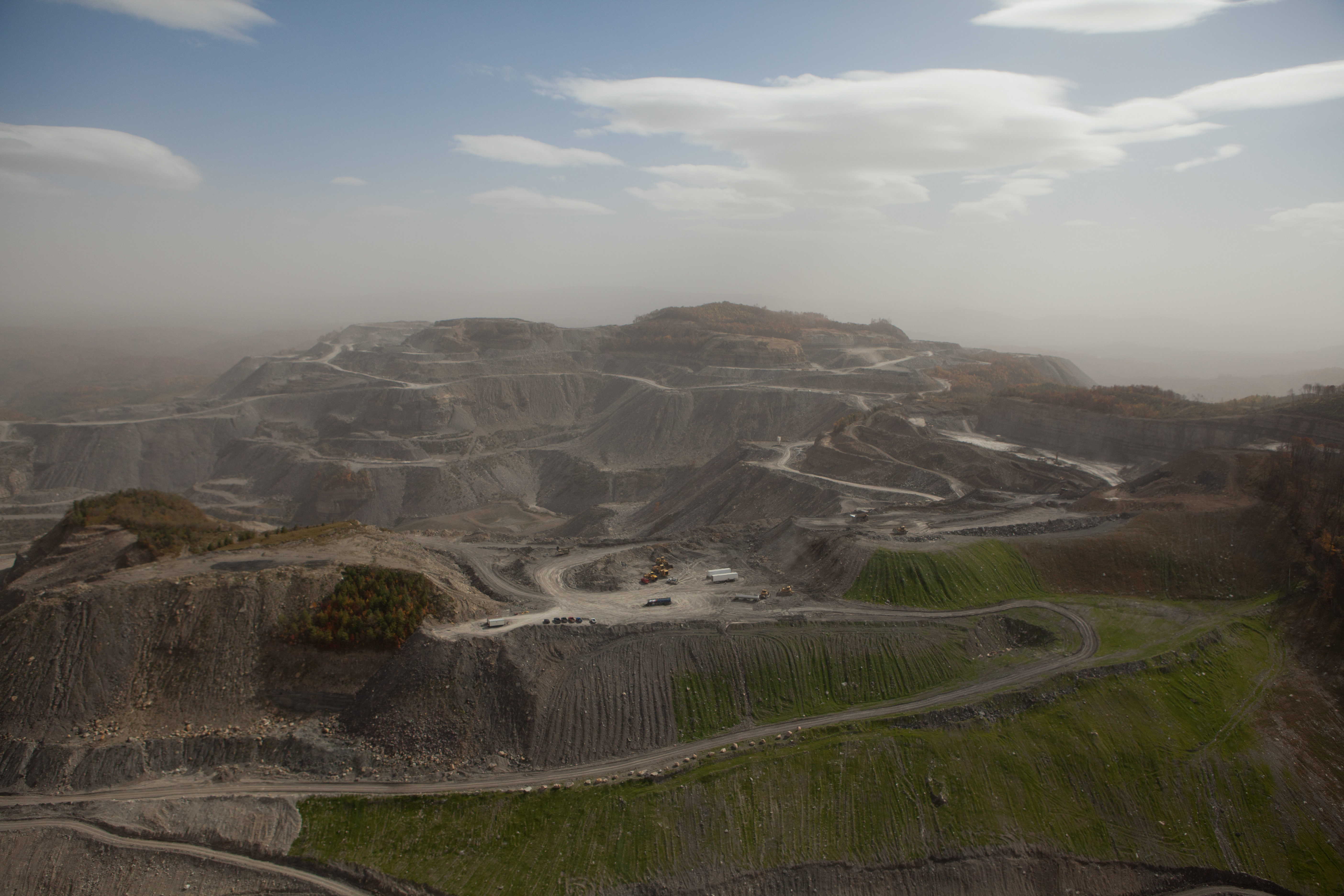 Coal production from surface mines, as reported to the US Energy Information Administration (EIA), has declined significantly for the Central Appalachian region since its peak in 2008. Likewise, the area of land being actively mined each year has steadily decreased since 2007. But because new land continues to be mined each year, the overall disturbance to Appalachian ecosystems has increased. From 2016 to 2018 the newly mined areas combined equaled 160 square kilometers – an area the size of the nation of Liechtenstein. One of the key findings of our research published in PLOS ONE was that the amount of land required to extract a single metric ton of coal had tripled from approximately 10 square meters in 1985 to nearly 30 square meters in 2015. Our update indicates that this trend still holds true for the 2016-2018 period: Despite the overall decrease in production, in 2016 approximately 40 square meters of land were disturbed per metric ton of coal produced – an all time high. This suggests that it is getting harder and harder for companies to access the remaining coal. 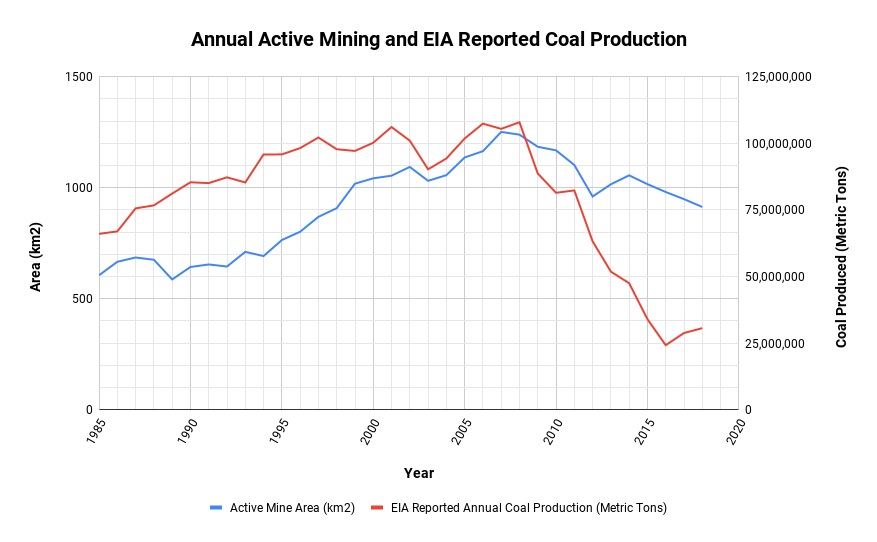 Active mine area (blue) and reported surface coal mine production in Central Appalachia (red) as provided by the US Energy Information Administration (EIA). The amount of coal produced has declined much more dramatically than the area of active mining. 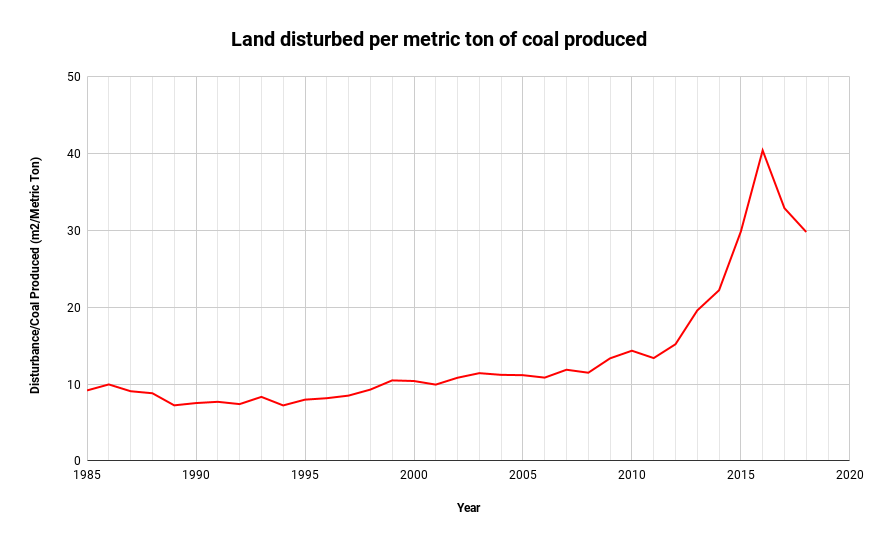 Tracking the expansion of these mines is only half the battle. We are also developing landscape metrics to assess the true impact of mining on Appalachian communities and ecosystems. We are working to generate a spectral fingerprint for each identified mining area using satellite imagery. This fingerprint will outline the characteristics of each site; including the amount of bare ground present and information about vegetation regrowing on the site. In this way we will track changes and measure recovery by comparing the sites over time to a healthy Appalachian forest. 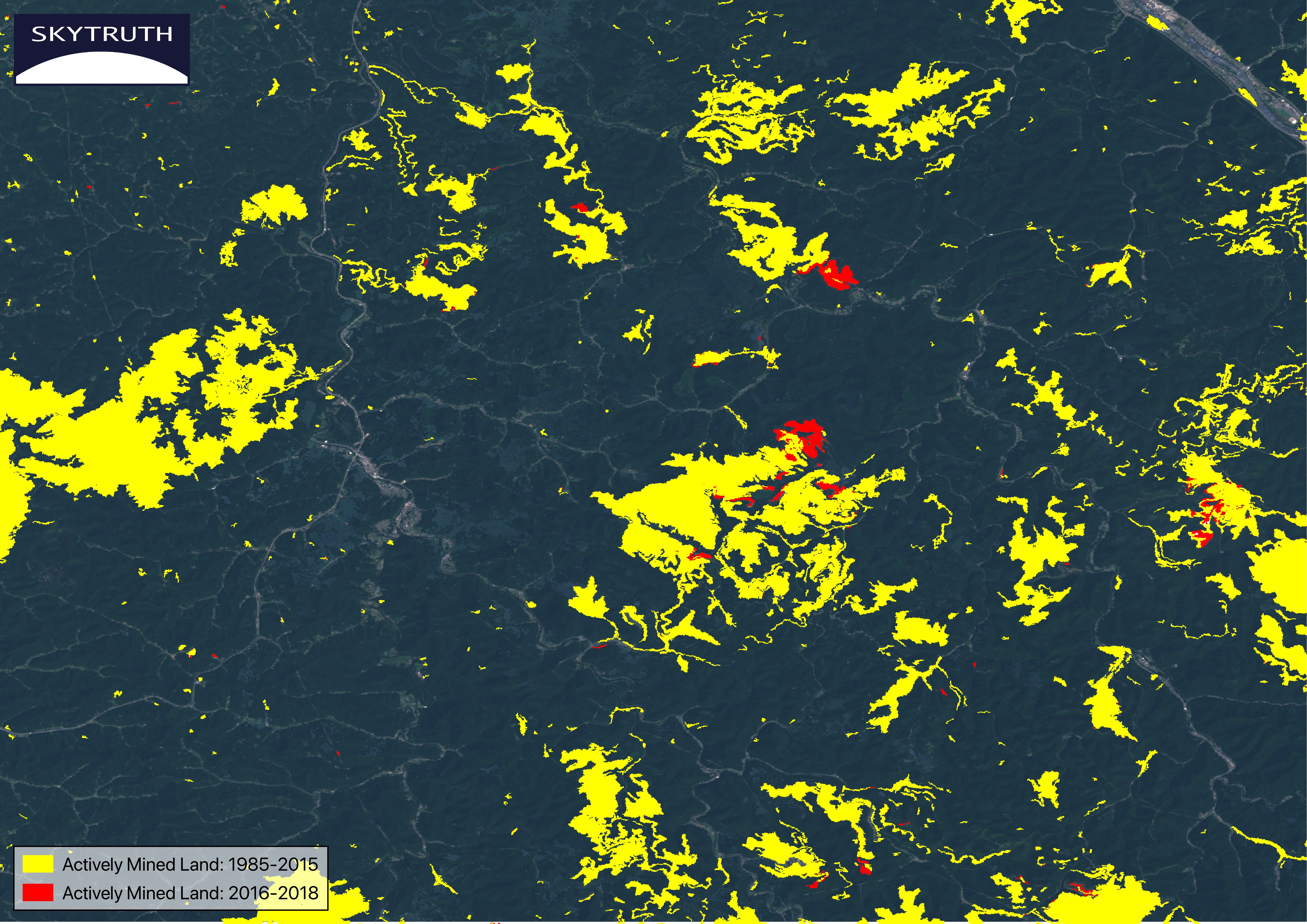 Mining activity Southwest of Charleston, WV. Land that was mined prior to 2016 is visible in yellow, and land converted to new mining activity between 2016 and 2018 is displayed in red.

Recovery matters. Under federal law, mine operators are required to post bonds for site reclamation in order “to ensure that the regulatory authority has sufficient funds to reclaim the site in the case the permittee fails to complete the approved reclamation plan.” In other words, mining companies set aside money in bonds to make sure that funds are available to recover their sites for other uses once mining ends. If state inspectors determine that mine sites are recovered adequately, then mining companies recover their bonds.

But the regulations are opaque and poorly defined; most states set their own requirements for bond release and requirements vary depending on the state, the inspector, and local landscapes. And as demand for coal steadily declines, coal companies are facing increasing financial stress, even bankruptcy. This underlines the importance of effective bonding that actually protects the public from haphazardly abandoned mining operations that may be unsafe, or unusable for other purposes.

We are now working to track the recovery of every surface coal mine in Central Appalachia. By comparing these sites to healthy Appalachian forests we will be able to grade recovery. This will allow us to examine how fully these sites have recovered, determine to what degree there is consistency in what qualifies for bond-release, and to what extent the conditions match a true Appalachian forest.

Bilge Dumping off the Coast of Brazil
Scroll to top