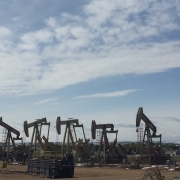 What do you do when big oil moves in next door?

Karen Speed’s new house in Windsor, Colorado was supposed to be a peaceful retirement home. Now she plans to move.

Patricia Nelson wanted her son Diego to grow up the way she did – far from the petrochemical plants surrounding their home in Louisiana. So she moved back to Greeley, Colorado to be close to her family. Then she learned about the drilling behind Diego’s school.

Shirley Smithson had enjoyed her quiet community for years, riding her horse through her neighbor’s pastures, watching the wildlife, and teaching at local schools. When she learned that oil wells would be popping up down the street, she was in denial at first, she says. Then she took action.

These women shared their stories with a group of journalists and others attending the Society of Environmental Journalists (SEJ) 2019 meeting in Fort Collins, Colorado last month. Fort Collins sits right next to Weld County – the most prolific county in Colorado for oil and gas production and among the most prolific in the entire United States. There, hydraulic fracturing (mostly for oil) has boomed, along with a population surge that is gobbling up farmland and converting open space into subdivisions. Often, these two very different types of development occur side-by-side.

“We moved [into our house] in September, 2014,” Karen Speed told me, “and by the third week of January 2015, boy, I regretted building that house.” That was the week she learned that Great Western Oil and Gas Company, LLC, was proposing to put a well pad between two neighborhoods; and one of those neighborhoods was hers. When residents complained, she said, the company moved the site across a road and into a valley. “Which really isn’t the right answer,” Speed said. “Not in my backyard attitude? No – not in my town.” The well pad now sits next to the Poudre River and a bike path according to Speed. “People I know no longer ride there. They get sick,” she said. “One guy I know gets nosebleeds. He had asthma already and gets asthma attacks after riding.“

Well pads in neighborhoods are not uncommon throughout parts of Colorado’s Front Range. Weld County alone has an estimated 21,800 well pads and produces roughly 88% of Colorado’s oil. SkyTruth’s Flaring Map reveals a high concentration of flaring sites occurring in that region. This industrial activity occurs within residential areas and farmland despite the fact that people living near fracking sites in Colorado complain of bloody noses, migraines, sore throats, difficulty breathing, and other health problems according to Nathalie Eddy, a Field Advocate with the nonprofit environmental group Earthworks.

And then there was the explosion. Two years after Speed moved into her new home, on December 22, 2017, her house shook when a tank exploded at Extraction Energy’s Stromberger well pad four miles away. “When it exploded it really rocked the town,” she said. More than a dozen fire departments responded to the 30-foot high flames. “It went from 8:45 in the evening until the following morning before they could recover and get out of that space,” Speed recalls. According to a High Country News story, workers raced around shutting down operations throughout the site — 19 wells in all plus pipelines, tanks, trucks and other industrial infrastructure  — to prevent oil, gas, and other chemicals from triggering more explosions. Roughly 350 houses sat within one mile of the site and many more were within shaking range. One worker was injured. Dispatcher recordings released by High Country News reveal how dangerous the situation was, and how local fire departments were unprepared for an industrial fire of that magnitude.

That explosion occurred the very night Patricia Nelson returned home from a long day at the District Court in Denver. Nelson has been part of a coalition of public interest groups – including the NAACP, the Sierra Club, Wall of Women, and Weld Air and Water – that sued the Colorado agency responsible for overseeing oil and gas production in the state, the Colorado Oil and Gas Conservation Commission, for approving permits for 24 wells behind her son Diego’s school.  The company that would drill those wells was the same company overseeing the site that exploded – Extraction Energy.

Under Colorado law, oil and gas wells can be as close as 500 feet from a home and 1,000 feet from a school. Extraction’s new wells would be just over that limit and less than 1,000 feet from the school’s playing fields. Although the court hadn’t yet ruled, the company began construction on the site a few months later, in February 2018, and began drilling the wells that May. Ultimately, the District Court and the Appeals Court upheld the permits. Oil wells now tower over the Bella Romero Academy’s playing fields and the surrounding neighborhood of modest homes.

Smithson once taught at Bella Romero and worries about the kids. “When you have noise pollution and light pollution and dust and methane and all the things that come with having oil and gas production going on, kids are impacted physically. Their lungs aren’t developed…their immune systems aren’t totally developed and they are picking all this up,” she said. She has tried to mobilize the community but has been frustrated by the intimidation many parents feel. “This is a community without a voice,” she said. Bella Romero Academy is roughly 87% students of color, most of whom qualify for free or reduced lunch. “There are kids from Somalia, from war camps” attending the school, Smithson said. “They have trauma from the top of their head to their toes. They’re not going to speak up.” Both Smithson and Nelson pointed out that immigrants – whether from Somalia or Latin America – are unlikely to speak out because they fear retaliation from Immigration and Customs Enforcement. Moreover, some parents work for energy companies. They fear losing their jobs if they oppose an oil site near the school.

In fact, according to Smithson, Nelson, and Speed, Extraction Energy came to Bella Romero because it expected few parents would resist: The company originally proposed these wells adjacent to the wealthier Frontier Academy on the other side of town, where the student body is 77% white. Extraction moved the wells to Bella Romero after an outcry from the school community. This kind of environmental injustice isn’t unusual, and it generated attention from major media outlets, including the New York Times and Mother Jones. You can see how close the wells are to the school in this clip from The Daily Show (and on the SkyTruth image below). 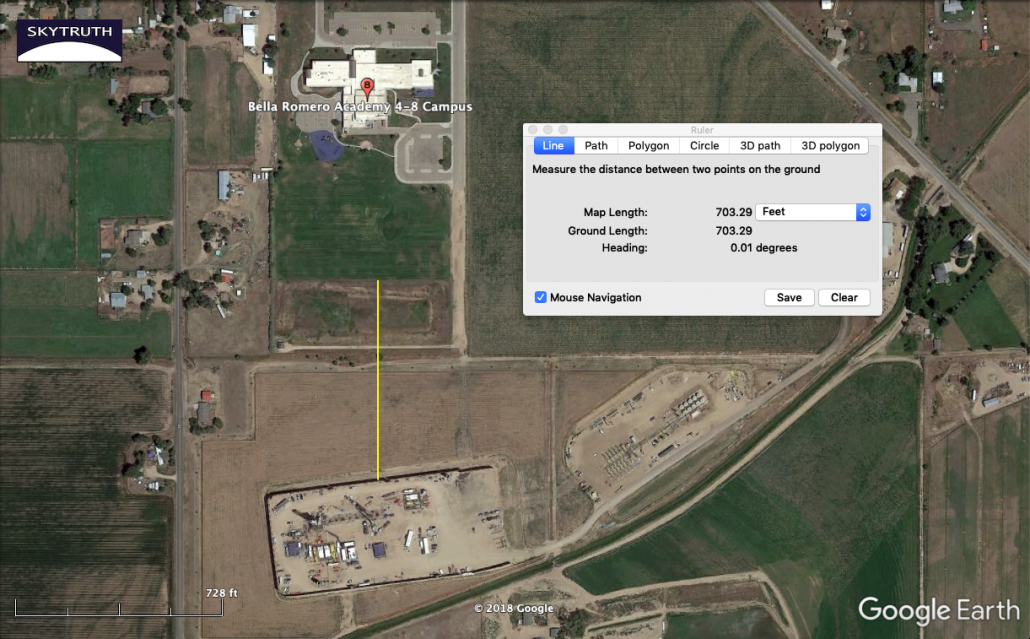 SkyTruth has resources to help residents, activists, and researchers address potential threats from residential fracking. SkyTruth’s Flaring Map covers the entire world, and users can see flaring hotspots in their region – where energy companies burn off excess methane from drilling operations into the air — and document trends in the volume of methane burned over time. The SkyTruth Alerts system can keep people in Colorado, New Mexico, Wyoming, Montana, Utah, Pennsylvania, West Virginia up-to-date on new oil and gas permits, and new activities in their area of interest.

We know that residents and researchers using these kinds of tracking tools can have major impact. Johns Hopkins University researchers used SkyTruth’s FrackTracker program, which identified the location of fracking sites in Pennsylvania, to document health impacts in nearby communities. Those impacts included increases in premature births and asthma attacks. Maryland Governor Larry Hogan cited this information in his decision to ban fracking in his state. Those interested in collaborating with SkyTruth on similar projects should contact us. 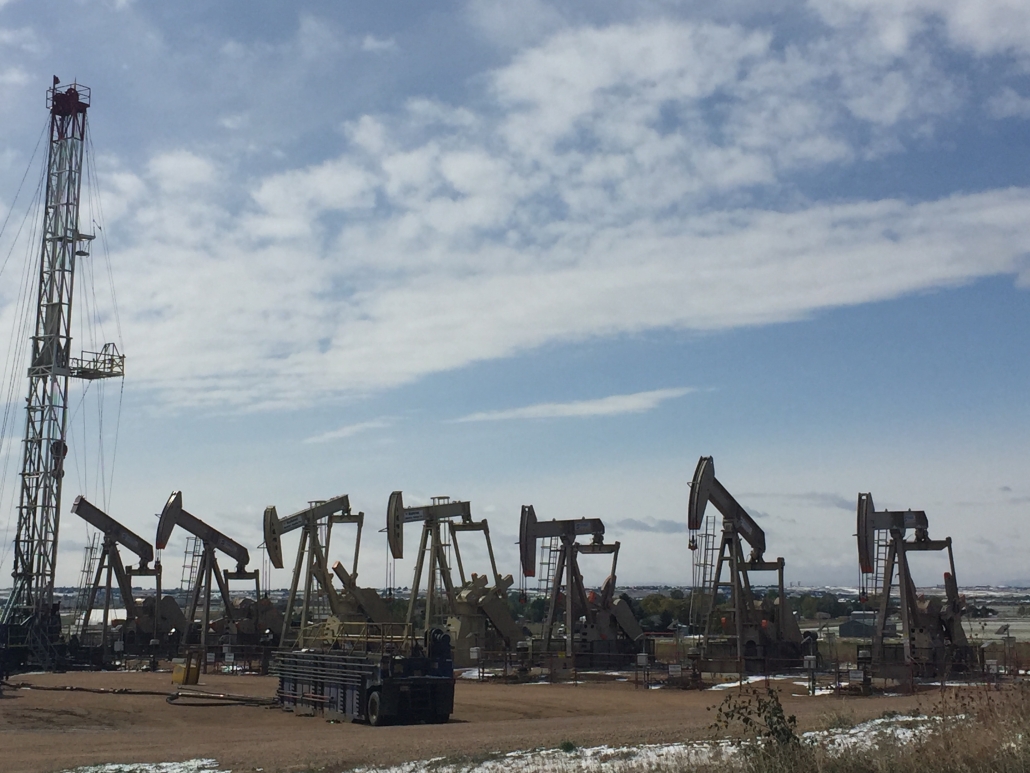 Although Colorado activists have had limited success so far, this past year did bring some positive changes. The Colorado General Assembly passed SB 181, which directs the Colorado Oil and Gas Conservation Commission to prioritize public health, safety, welfare, and the environment over oil and gas development. The new law also allows local governments to regulate the siting of oil and gas facilities in their communities and set stricter standards for oil and gas development than the state. Colorado agencies are still developing regulations to implement these new provisions.

Improvements in technology could help as well.  The same day the SEJ crew met with concerned residents, a spokeswoman with SRC Energy explained the state of the art operations at their Golden Eagle pad in Eaton, Colorado. That technology is designed to mitigate impacts on the surrounding community and includes a 40-foot high sound wall, a water tank on site to pump water from a nearby farm (which reduces truck traffic), and electric pumps (to reduce emissions), among other features. Still, the fear of being surrounded by industrial sites remains for many residents. 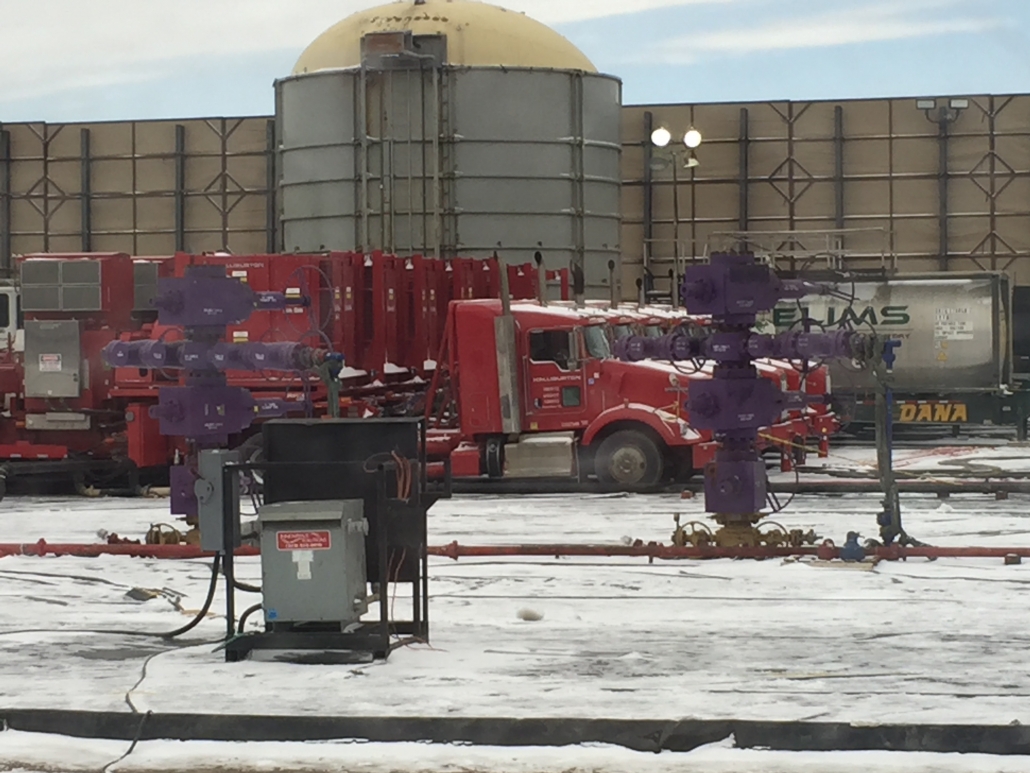 In the meantime, Karen Speed is starting to look elsewhere for a new home. Shirley Smithson has decided she’s not going to let an oil company ruin her life. And Patricia Nelson will continue to fight for her family.

“I think about moving all the time,” Nelson told the group of journalists, her voice cracking.  “But my whole family lives here and I don’t feel I can leave them behind… My sister has five children and drives to Denver for work every day…. I have cousins with kids at this school and family friends. Really, moving isn’t an option for me.”