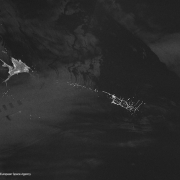 We’re all accustomed to seeing maps of the terrestrial spaces we occupy. We expect to see cities, roads and more well labeled, whether in an atlas on our coffee table or Google Maps on our smartphone. SkyTruthers even expect to access information about where coal mines are located or where forests are experiencing regrowth. We can now see incredibly detailed satellite imagery of our planet. Try looking for your house in Google Earth. Can you see your car in the driveway?

In comparison, our oceans are much more mysterious places. Over 70% of our planet is ocean, yet vast areas are described with only a handful of labels: the Pacific Ocean, Coral Sea, Strait of Hormuz, or Chukchi Sea for example. And while we do have imagery of our oceans, its resolution decreases drastically the farther out from shore you look. It can be easy to forget that humans have a permanent and substantial footprint across the waters of our planet. At SkyTruth, we’re working to change that.

Former SkyTruth senior intern Brian Wong and I are working to create a dataset of offshore infrastructure to help SkyTruth and others more effectively monitor our oceans. If we know where oil platforms, aquaculture facilities, wind farms and more are located, we can keep an eye on them more easily. As technological improvements fuel the growth of the ocean economy, allowing industry to extract resources far out at sea, this dataset will become increasingly valuable. It can help researchers examine the effects of humanity’s expanding presence in marine spaces, and allow activists, the media, and other watchdogs to hold industry accountable for activities taking place beyond the horizon.

Brian is now an employee at the Marine Geospatial Ecology Lab (MGEL) at Duke University. But nearly two years ago, at a Global Fishing Watch research workshop in Oakland, he and I discussed the feasibility of creating an algorithm that could identify vessel locations using Synthetic Aperture Radar (SAR) imagery. It was something I’d been working on on-and-off for a few weeks, and the approach seemed fairly simple. 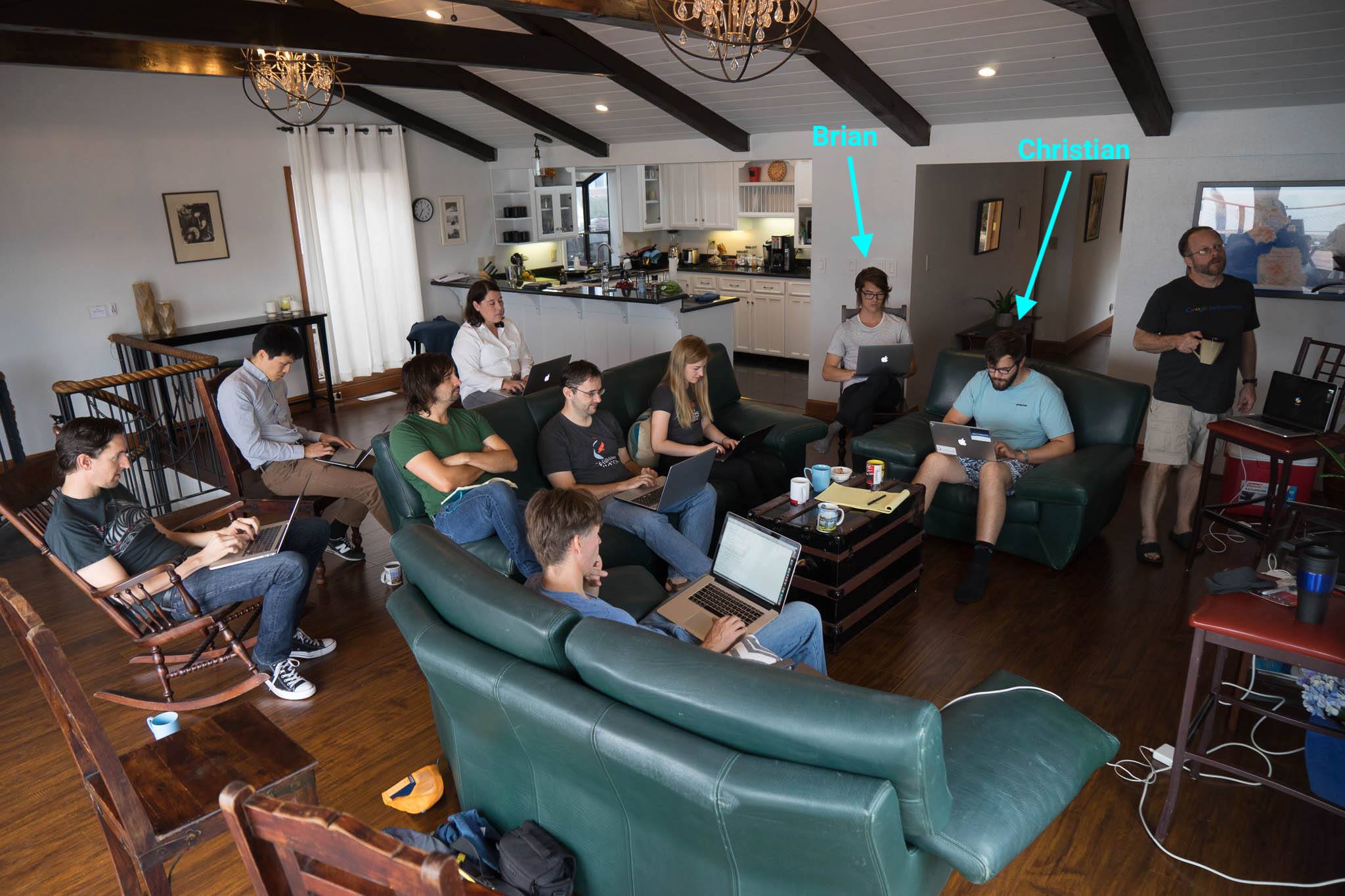 Readers who have been following SkyTruth’s work are probably used to seeing SAR images from the European Space Agency’s Sentinel-1 satellites in our posts. They are our go-to tools for monitoring marine pollution events, thanks to SAR’s ability to pierce clouds and provide high contrast between slicks and sea water. SAR imagery provides data about the relative roughness of surfaces. With radar imagery, the satellite sends pulses to the earth’s surface. Flat surfaces, like calm water (or oil slicks), reflect less of this data back to the satellite sensor than vessels or structures do, and appear dark. Vessels and infrastructure appear bright in SAR imagery because they experience a double-bounce effect. This means that — because such structures are three-dimensional — they typically reflect back to the satellite more than once as the radar pulse bounces off multiple surfaces. If you’re interested in reading more about how to interpret SAR imagery this tutorial is an excellent starting point. 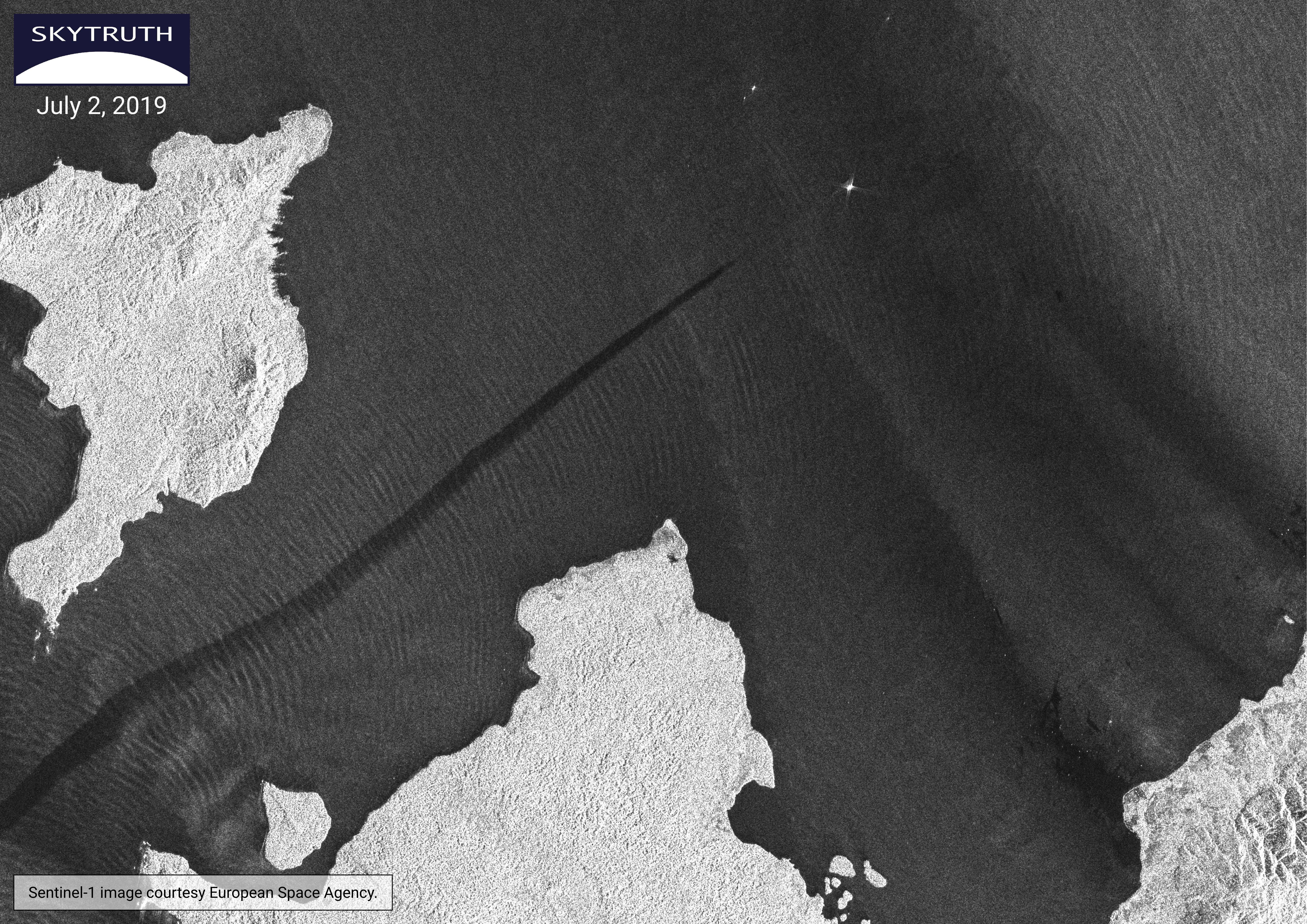 Image 2. The long, dark line bisecting this image is a likely bilge dump from a vessel captured by Sentinel-1 on July 2, 2019. The bright point at its end is the suspected source. Read more here. 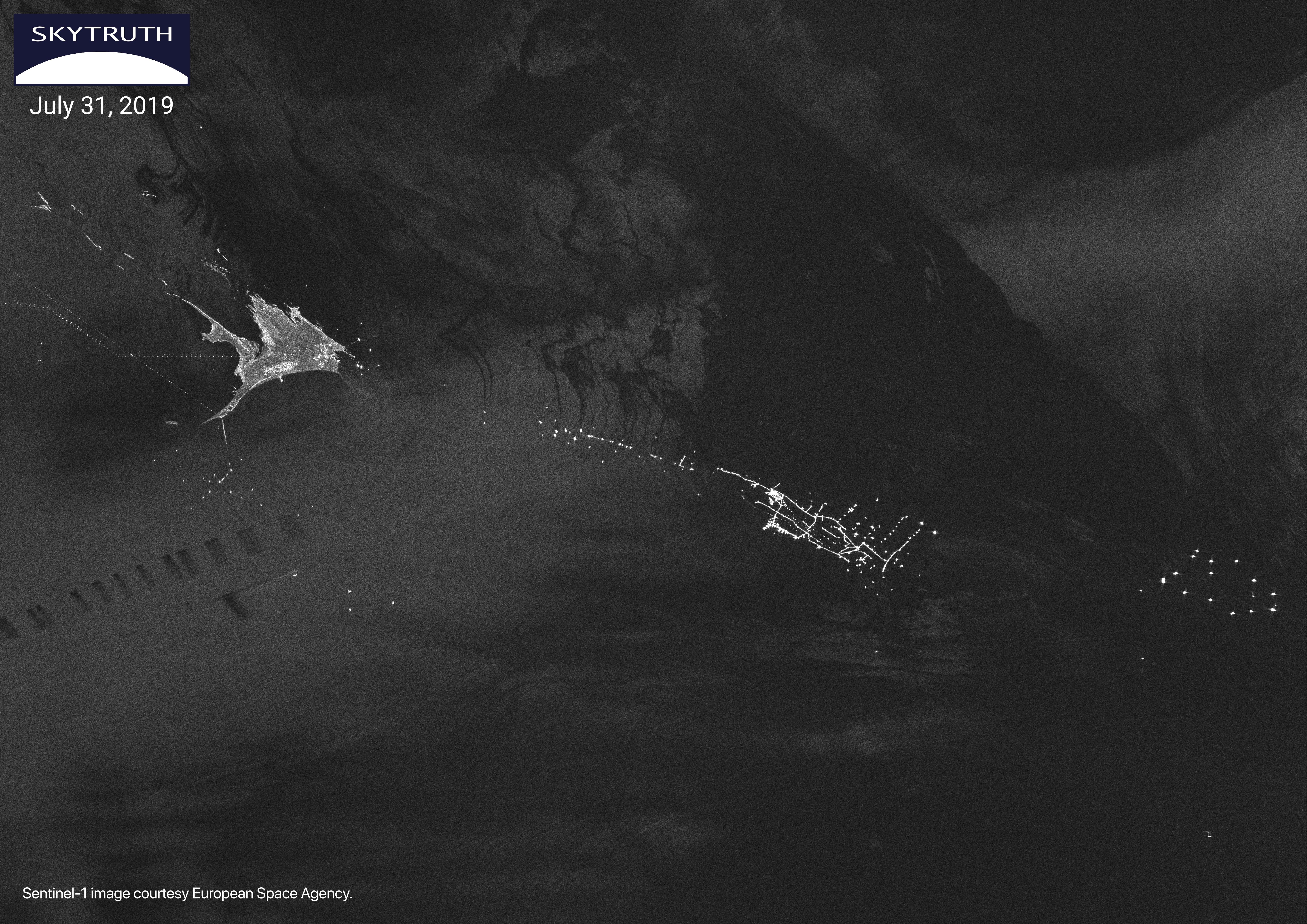 Image 3. The bright area located in the center of this Sentinel-1 image is Neft Daşları, a massive collection of offshore oil platforms and related infrastructure in the Caspian Sea.

Given the high contrast between water and the bright areas that correspond to land, vessels, and structures (see the vessel at the end of the slick in Image 2 and Neft Daşları in Image 3), we thought that if we could mask out the land, picking out the bright spots should be relatively straightforward. But in order to determine which points were vessels, we first needed to identify the location of all the world’s stationary offshore infrastructure, since it is virtually impossible to differentiate structures from vessels when looking at a single SAR image. Our simple task was turning out to be not so simple.

While the United States has publicly available data detailing the locations of offshore oil platforms (see Image 4), this is not the case for other countries around the world. Even when data is available, it is often hosted across multiple webpages, hidden behind paywalls, or provided in formats which are not broadly accessible or useable. To our knowledge, no one has ever published a comprehensive, global dataset of offshore infrastructure that is publicly available (or affordable). 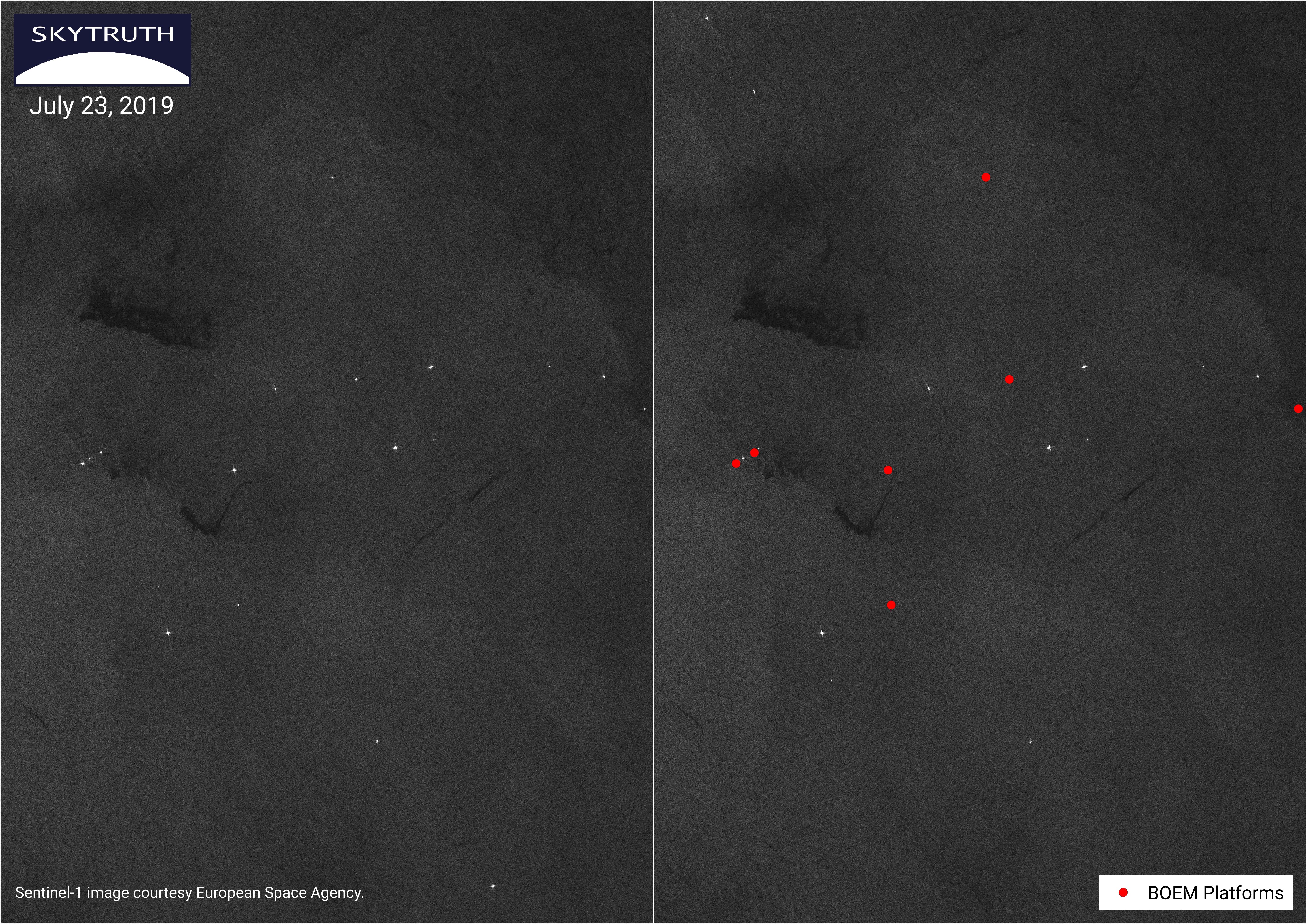 Image 4. Two versions of a single Sentinel-1 image collected over the Gulf of Mexico, in which both oil platforms and vessels are visible. On the left, an unlabelled version which illustrates how similar infrastructure and vessels appear. On the right, oil platforms have been identified using the BOEM Platform dataset.

As we began to explore the potential of SAR imagery for automated vessel and infrastructure detection, we quickly realized that methods existed to create the data we desired. The Constant False Alarm Rate algorithm has been used to detect vessels in SAR imagery since at least 1988, but thanks to Google Earth Engine we are able to scale up the analysis and run it across every Sentinel-1 scene collected to date (something which simply would not have been possible even 10 years ago). To apply the algorithm to our dataset, we, among other things, had to mask out the land, and then set the threshold level of brightness that indicated the presence of a structure or vessel. Both structures and vessels will have high levels of reflectance. So we then had to separate the stationary structures from vessels. We did this by compiling a composite of all images for the year 2017. Infrastructure remains stationary throughout the year, while vessels move. This allowed us to clearly identify the infrastructure.

Image 5. An early version of our workflow for processing radar imagery to identify vessel locations. While the project shifted to focus on infrastructure detection first, many of the processing steps remained.

Where We Are Now

Our next step in creating the infrastructure dataset was testing the approach in areas where infrastructure locations were known. We tested the algorithm’s ability to detect oil platforms in the Gulf of Mexico, where the US Bureau of Ocean Energy Management (BOEM) maintains a dataset. We also tested the algorithm’s ability to identify wind turbines. We used a wind farm boundary dataset provided by the United Kingdom Hydrographic Office to validate our dataset, as well as information about offshore wind farms in Chinese waters verified in media reports, with their latitude and longitude available on Wikipedia. 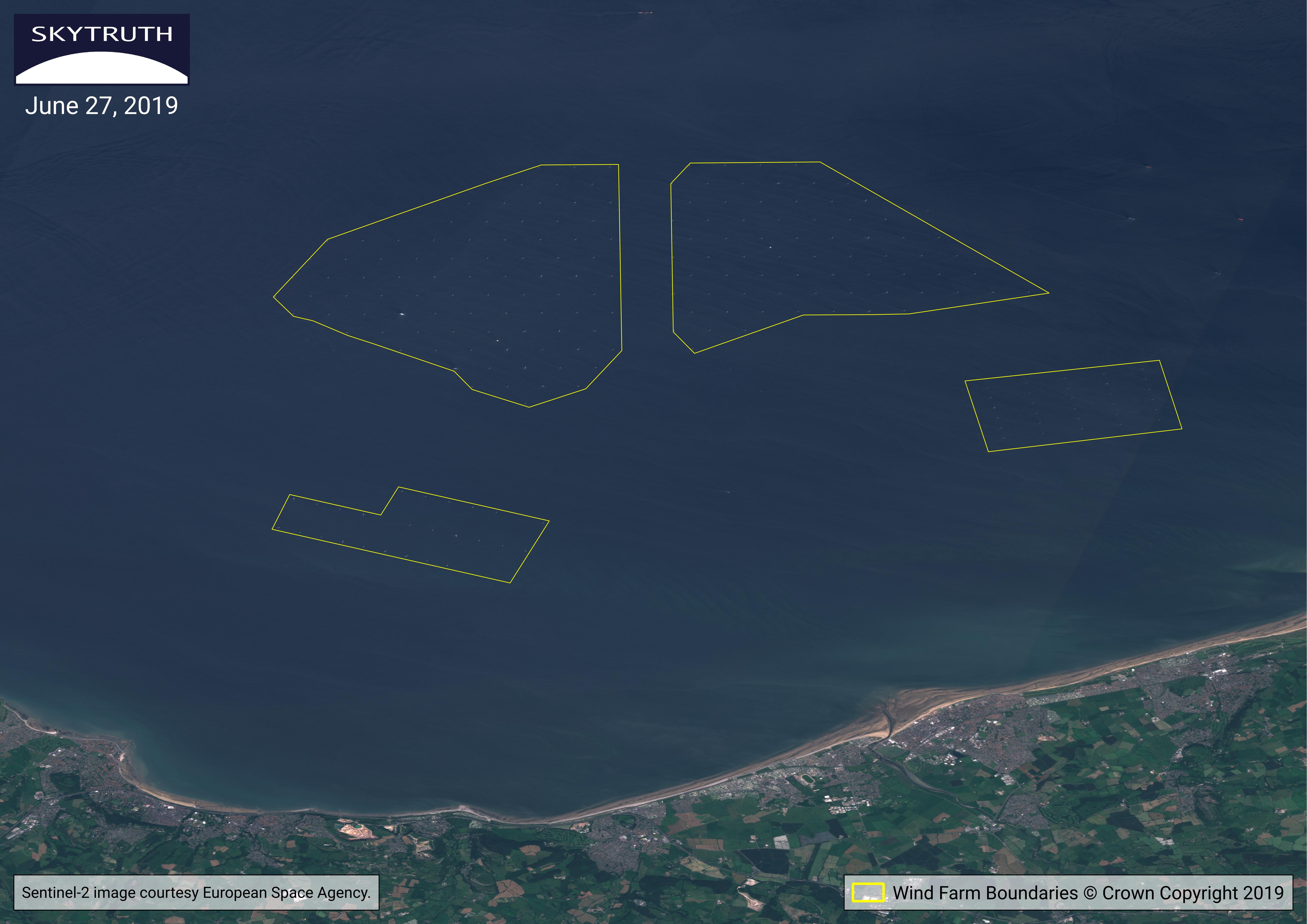 Image 6. Wind farms in the Irish Sea, west of Liverpool.

Our results in these test areas have been very promising, with an overall accuracy of 96.1%. The methodology and data have been published by the journal Remote Sensing of Environment. Moving beyond these areas, we are continuing to work with our colleagues at MGEL to develop a full global dataset. What started as a project to identify vessels for GFW has turned into an entirely different, yet complementary, project identifying offshore infrastructure around the world.

In addition to helping our partners at Global Fishing Watch identify fishing vessels, mapping the world’s offshore infrastructure will help SkyTruth more effectively target our daily oil pollution monitoring work on areas throughout the ocean that are at high risk for pollution events from oil and gas drilling and shipping (such as bilge dumping). This is also the first step towards one of SkyTruth’s major multi-year goals: automating the detection of marine oil pollution, so we can create and publish a global map of offshore pollution events, updated on a routine basis.

Be sure to keep an eye out for more updates, as we will be publishing the full datasets once we complete the publication cycles.