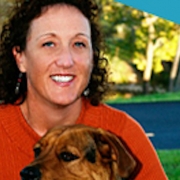 Teri Biebel was drained and exhausted. Not just from a long shift at the casino where she worked, but from 24 years in the casino industry. She was ready for a change. So one afternoon Teri called her friend Holly at Shepherd University to see if there were any job openings at the school. There weren’t. But Shepherdstown, West Virginia is a tight-knit community, and Holly had spoken with SkyTruth Board Member Paul Woods at a recent Rotary Club meeting. Paul had mentioned that SkyTruth was looking for an office administrator.

“We both didn’t know what SkyTruth did,” Teri says now. “Holly said something like ‘they use radar to do stuff. Let me contact Paul.’” Paul told SkyTruth President John Amos that someone was interested in the job. When John called Teri to see if she wanted to meet. Teri said, “absolutely. I hate what I’m doing.”

Teri grew up in Wildwood, New Jersey, on the beach and not far from Atlantic City. She and her husband Don both worked at the casinos, and Don also served in the Navy Reserve (after a six-year career in active duty). Soon after he returned from his deployment to Kuwait in 2005-2006, Teri and Don took a much-needed vacation together in Hawaii. It was there that they got the call: The casino was downsizing. Don had lost his job.

Both of them soon found work at the casino in Charles Town, West Virginia and settled in nearby Shepherdstown. With two young daughters, they worked alternate shifts. But Teri became tired of taking people’s money. She remembers one customer who won a million dollars, but then gambled it all away and ended up losing everything: his home, his job, and his million dollars.

When John met Teri he was impressed with her professional experience, but also her recent personal accomplishments: Teri had just run her first marathon and lost 60 pounds in the process. “She had a lot of responsibility in her previous jobs at the casinos,” says John. “And we needed someone who could handle that level of responsibility. I was still the only SkyTruth employee at that point, so I needed someone I could depend on.“ The fact that she had trained for and run a marathon “said a lot about her,” according to John, and what she could accomplish.

Teri started in December 2010 and has watched SkyTruth grow from two employees to 10 or more now. She recalls that on her first or second day she attended a SkyTruth board meeting to take notes. That was when she first saw John in action. “When John talks he commands attention,” she says now. “You want to hear more. I never knew this stuff existed, that you could use satellite imagery to track oil spills or anything.” She likes her job at SkyTruth because she learns so much. In addition to her office administration duties, Teri has tracked oil pollution in the ocean using imagery, including the years-long spill at the Taylor Energy site in the Gulf of Mexico. (Thanks to SkyTruth’s dogged tracking of this spill, the Coast Guard finally ordered the company to fix the leak last year.) “This is my ninth year at SkyTruth and I’m still fascinated with all the things that we can see and do and change,” she says.

Perhaps even more importantly, “I feel like we’re helping people. We’re providing this data to help people see what’s going on around them… It’s a huge contrast” from her old job she says. “I feel like I’m doing good now.” 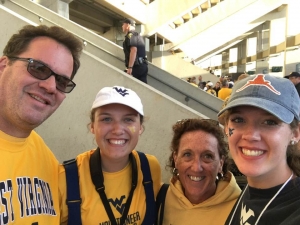 The move to Shepherdstown has also been good for Teri’s daughters Jenn and Amanda. Both are now students at West Virginia University and are skilled musicians. The band program in the local high school “is second to none,” according to Teri and both her girls benefited greatly from the experience. In fact, Jenn, who plays trumpet, was nominated by her band director in high school, and accepted, into the US Army All American Marching Band. The Army flew her and 124 other American high school students to San Antonio, Texas for a week. They toured the Alamo and the San Antonio River Walk, and then marched at the Army All-American High School Bowl Game (comprised of high school seniors from around the country). “I’m not sure they would have had that [band] experience if we stayed in New Jersey,” says Teri. She wrote about one of her own profound experiences during the San Antonio trip for her blog Snarkfest (a blog she describes as “thoughts from a totally snarkastic Mom”).

And despite a few lapses to raise her girls, Teri has kept running. So far, she has run three full marathons, 22 half marathons and two Tough Mudders. Tough Mudders are 10-mile races with two or three obstacles each mile. Later this month she’ll be running the Marine Corps Marathon in Washington D.C. for the second time. With her daughters away at college, Teri has found time for long training runs again. She also has discovered that, as she puts it, “being an empty nester isn’t as bad as I thought. I miss all that [childhood] stuff….But my girls are where they need to be. It’s time for me now.”

Training Computers to See What We See

What About the Oceans? Mapping Offshore Infrastructure
Scroll to top