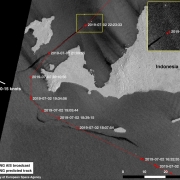 [This analysis of oil pollution in the waters of southeast Asia was written as part of a collaborative effort between SkyTruth team members Lucy Meyer and Brendan Jarrell.]

Our routine monitoring of the world’s oceans has led to some extraordinary findings. For example, in previous updates, we’ve identified oil slicks in traffic-heavy locations like the Strait of Malacca. But as you’ll see in this post, bilge dumps occur elsewhere in southeast Asia.

Those who follow our posts are probably familiar with how we identify vessels at sea. To new readers, let us explain what bilge dumping is and how we identify potentially responsible vessels. Bilge dumping is the disposal of waste water from a ship’s lower hull. Bilge water is supposed to be treated before it’s discharged, but sometimes vessel operators will bypass the pollution control equipment and flush oily, untreated bilge into the ocean – in direct violation of marine pollution law. We use images from satellites to monitor for illegal bilge dumping. In satellite imagery, oily bilge dumps usually form distinctive linear slicks. By matching the time of the imagery to broadcasts from a vessel tracking service called automatic identification system (AIS), we can determine the identity of vessels that appear to be causing the slicks. We used this process to identify the vessel associated with a long bilge slick in Figure 1 below. 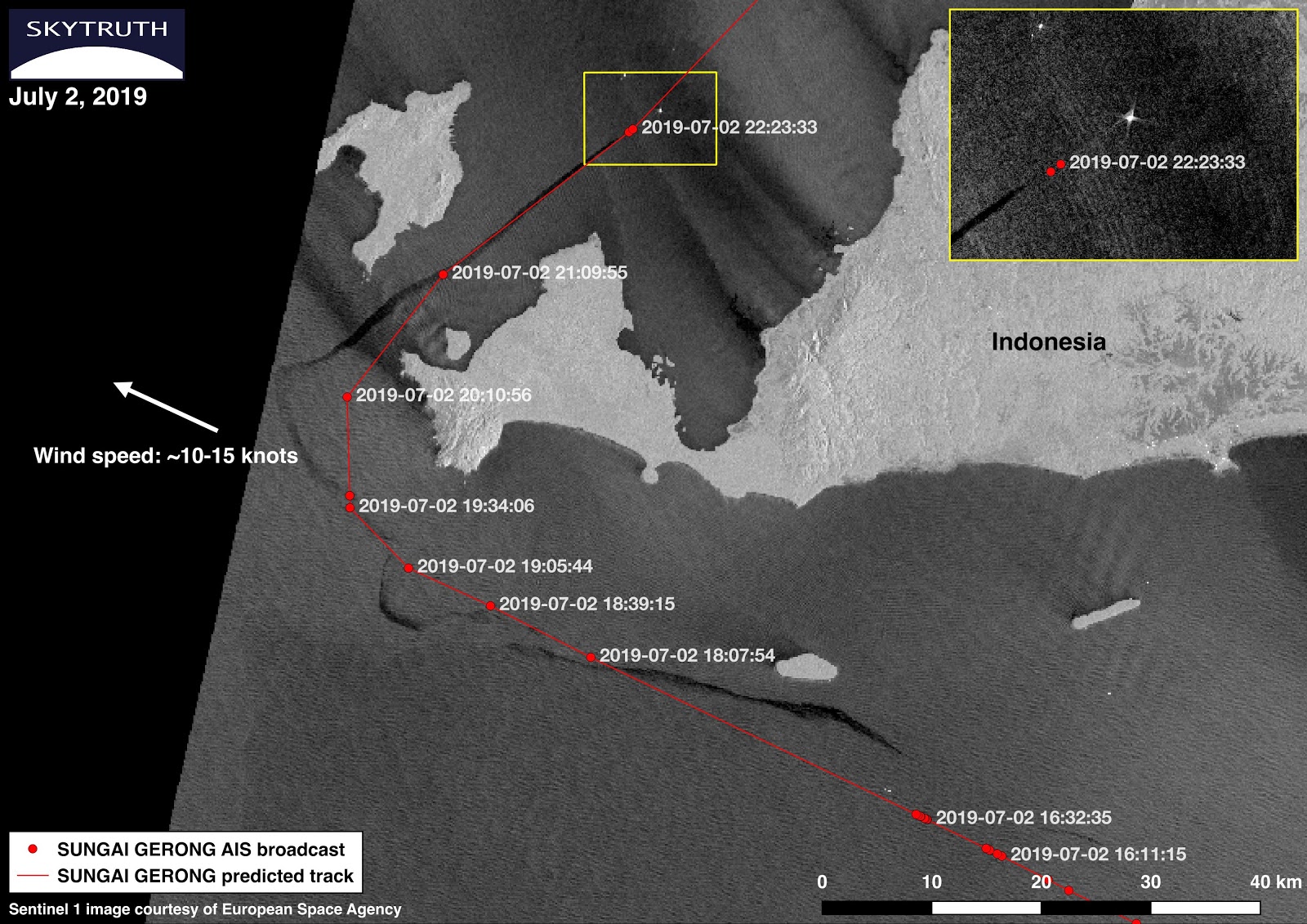 This Sentinel-1 radar satellite image from July 2nd shows a slick about 177 kilometers long around the southwest tip of Banten Province, Island of Java, Indonesia (Figure 1). In the yellow box, you can see a vessel at the head of the slick. By investigating AIS broadcasts from exactEarth’s ShipView service, we identified an Indonesian oil products tanker named the Sungai Gerong as the likely vessel. The satellite scene, captured at 22:33 UTC (Coordinated Universal Time), shows a slick that closely aligns to the AIS broadcasts from the Sungai Gerong.

You’ll probably notice that the tail-end of the slick is a bit contorted and offset from the track of the Sungai Gerong. The slick’s appearance was likely influenced by ocean currents and local weather conditions between the time of the ship’s passing and when the image was taken. Global wind maps show that there were 10-15 knot winds blowing northwest up to six hours before the image was acquired. This data suggests that wind likely impacted the slick’s appearance. As a result, we believe that the Sungai Gerong is the likely source of this slick.

Using AIS, we tracked the Sungai Gerong as it traveled north through the Sunda Strait — the body of water between the Indonesian islands of Java and Sumatra — to the port of Jakarta. Similar to the Strait of Malacca, the Sunda is an important waterway that connects the Indian Ocean to the Java Sea. Though not as dense with marine traffic as the Malacca Strait, the Sunda is still subjected to pollution from vessels.

We also recently identified two suspected bilge dumps in the Philippines (Figure 2). Occurring on July 6th in the South China Sea, a 238 kilometer long slick behind the vessel in this Sentinel-1 radar image looks like a bilge dump. The Philippine island of Palawan, a popular tourist destination for its beautiful natural landscape, appears on the right side of the map frame. Another smaller slick without a known source is visible to the left of the larger slick. 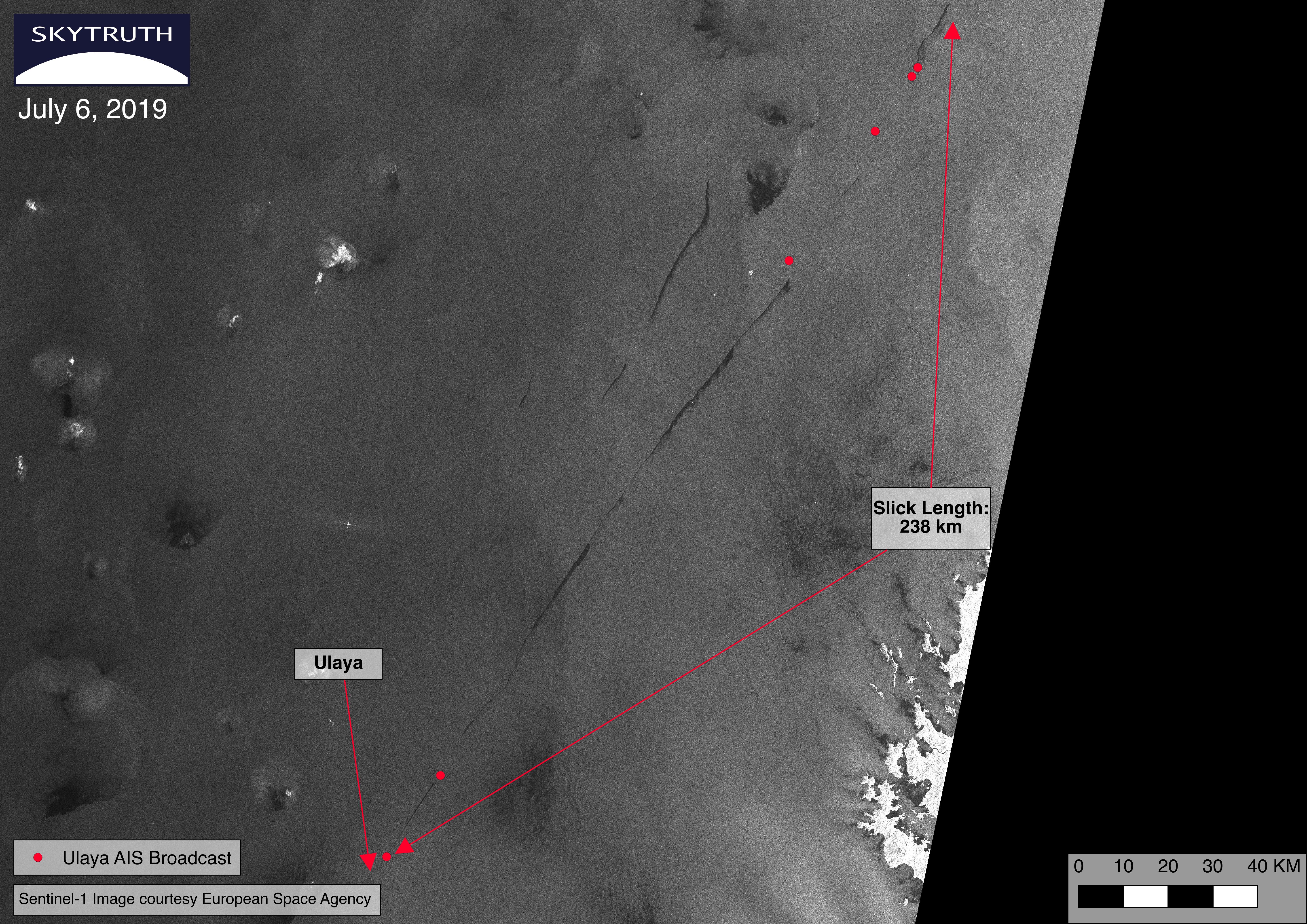 Figure 2: The Ulaya makes its way through the South China Sea. Palawan Island, a part of the Philippines, can be seen to the right.

Using AIS broadcasts from ShipView, we identified the Ulaya, a Thai oil tanker, as a possible source of the slick. The last AIS broadcast from the Ulaya (seen directly above the ship) was transmitted fifteen minutes before the image was captured. These AIS broadcasts give us reason to believe that the Ulaya could be responsible for this slick. Moreover, ShipView shows that the vessel was headed towards the Port of Belawan in the Strait of Malacca with a shipment of  Dangerous Goods. According to the International Maritime Organization, a United Nations agency that regulates global shipping, chemicals falling under this classification are “hazardous to marine environments.” Thus, a slick from this ship could be of greater concern than usual.

These examples show that bilge dumping continues to be a problem in the waters of southeast Asia. But with satellite imagery, anyone, anywhere can see what’s happening on the water and help to raise the alarm. We hope that our persistent and careful surveillance will inspire others to pressure policy makers, government regulators, and the shipping industry to take strong, coordinated action to stop bilge dumping.