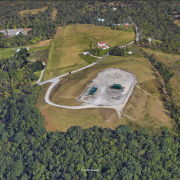 This will be the first entry in a three-part series visually chronicling the expansion of natural gas drilling with hydraulic fracturing — fracking — across Pennsylvania. This series is meant to complement our work mapping setback distances and potential adverse public health consequences in Allegheny County, PA. For more about this work, please check out our blog post and the web app.

Hydraulic fracturing (otherwise known as “fracking”) is a controversial and disruptive process that has taken the Pennsylvania landscape by storm. The state has become prime real estate for the extraction of natural gas given its location above both the Utica Shale and Marcellus Shale formations, two of the United States’ most fruitful reservoirs of natural gas. Over the past decade, prospectors and entrepreneurs have come from near and far to grow the region’s natural gas industry. As a result, parts of the state have become riddled with fracking pads, which aim to break the precious resource out of pockets of porous rock under the Earth’s surface for harvesting. There are human health and environmental consequences coinciding with this process, but little regulation protects the state’s counties from these adverse impacts of fracking.

Allegheny County, home to the city of Pittsburgh and over one million residents, stands as both a case study and as a potential stronghold against the encroachment of natural gas drilling. Their main defense against fracking lies in zoning regulations which require a “setback” between drilling sites and “occupied structures.” The current minimum setback distance in the state is 500 feet, but that has not stopped well pad development from slowly creeping closer to homes (and vice-versa, as new home construction moves into areas of pre-existing drilling). In this post, we will look at some of these areas in Allegheny County and try to gain insight into the county’s current state as it pertains to natural gas development.

This first area, located directly south of the Pittsburgh International Airport (PIT), shows some of this development.  In just four years, we see three new drilling sites pop up along a bend in I-376, as well as a drilling-related fluid retainment pond.  Notice the close proximity of the southernmost drilling site to these neighborhoods. A 500-foot setback distance may not be enough to protect these residential areas from potential health consequences linked to the fracking process:  recent research suggests that living within two miles (3.2 km) of a natural gas drilling site could subject you to adverse health effects. 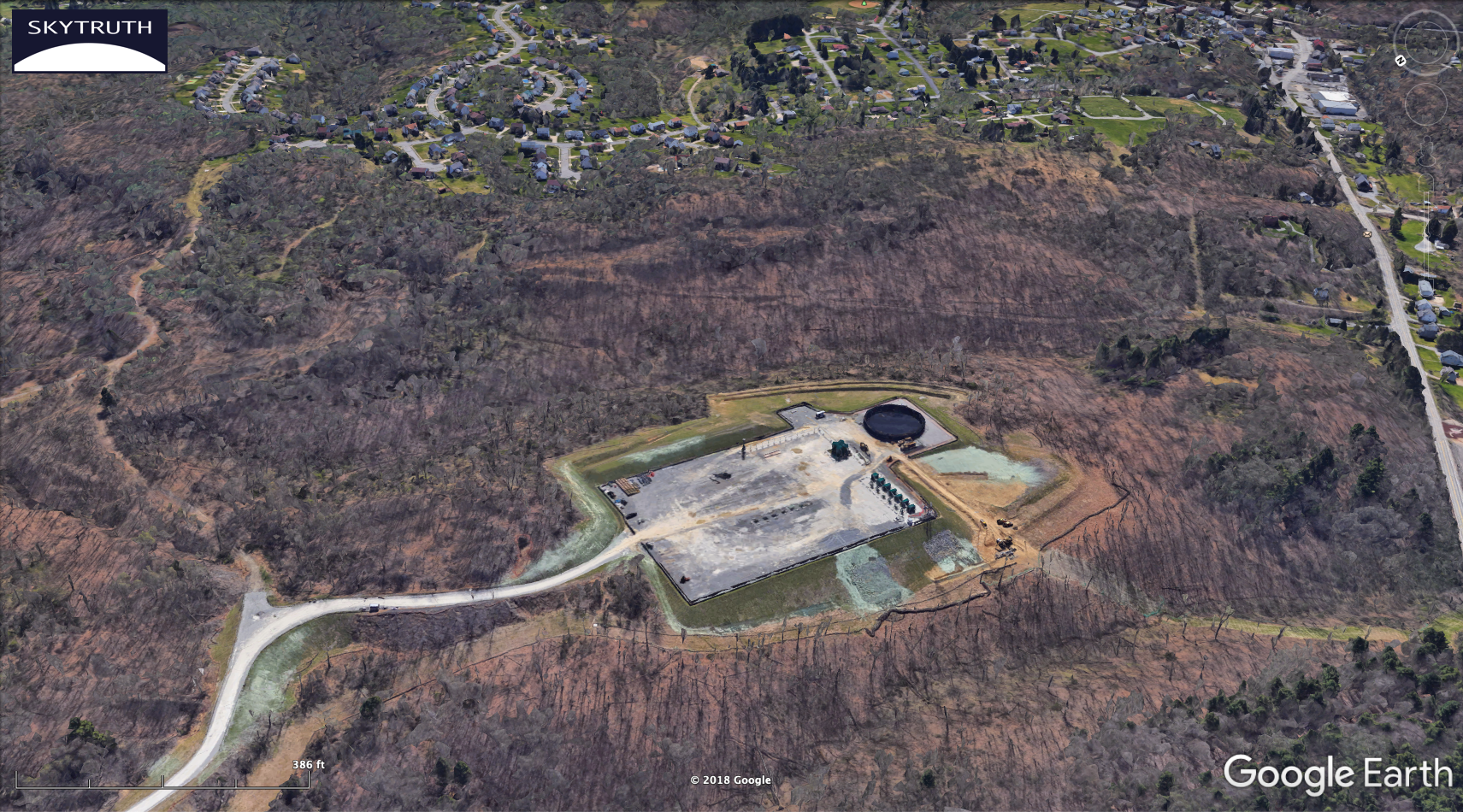 This 3D image of the drilling site seen at the bottom left-hand of the scene in the gif above (courtesy Google Earth) shows just how close these drilling sites can get to residential areas.

This second set of images comes from the Forward Township, located on the Monongahela River along the border of Allegheny and Washington County.  Though not as heavily trafficked as the area surrounding PIT, the farms which lease their property to drilling companies could be putting their neighbors at risk.  Located near this well development is the William Penn School, a K-5 school, and several homes and farms. These residents might be facing potential threats without even having had a say in what is developed near them.

This example is located to the northwest of the towns of Tarentum and Brackenridge.  This is another demonstration of gas drilling in the county, with the pads appearing between 2010 and 2017. 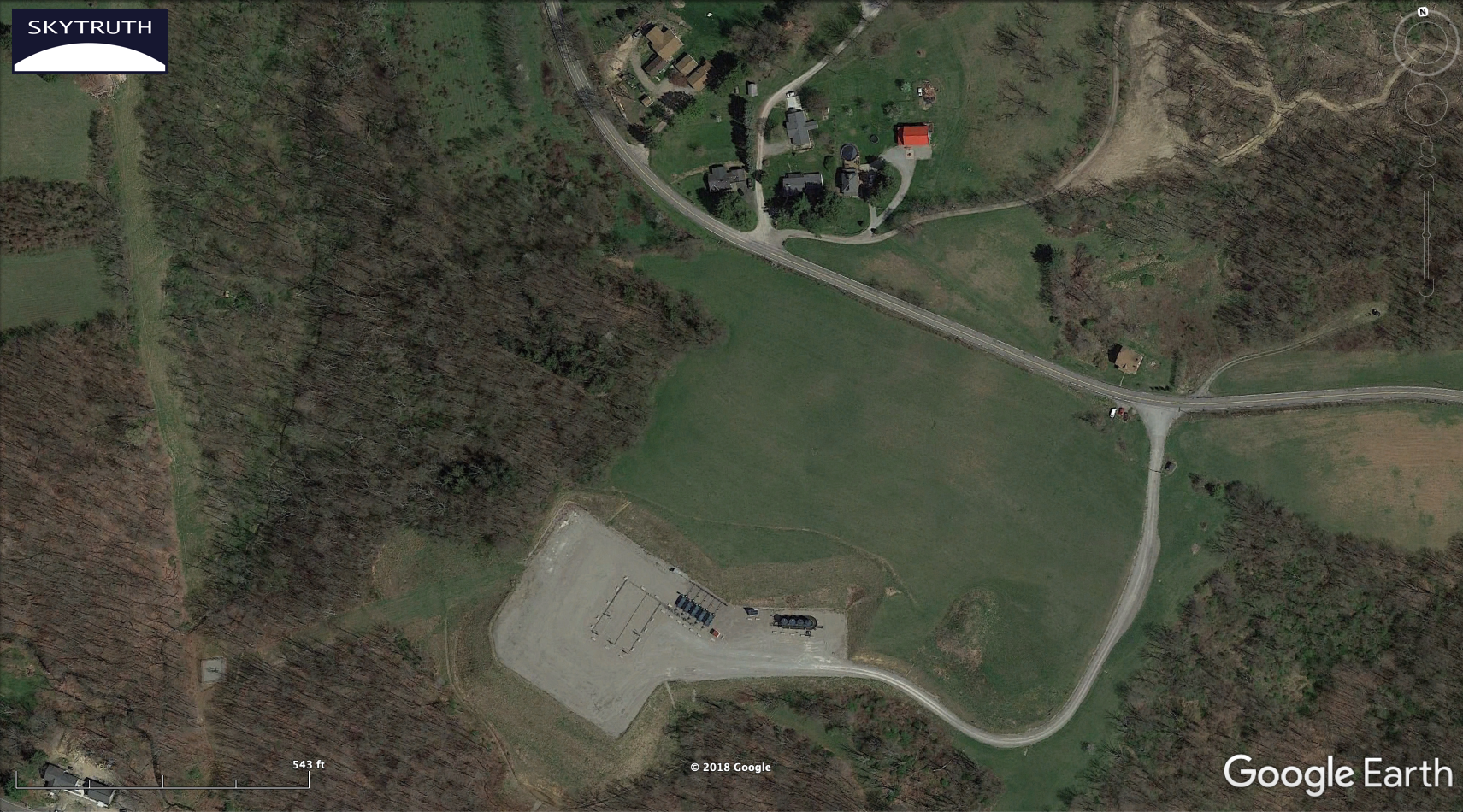 This image, taken from the above scene, again shows just how close these drilling sites are being built to people’s homes.  This development is nearby where their children play and where people enjoy their time outside, as evidenced by the swimming pools which can be seen in the above image.  Though development in the county is sparse as of now, the groundwork is in place for a significant expansion of drilling in Allegheny County if setback distances are not strictly enforced or extended. 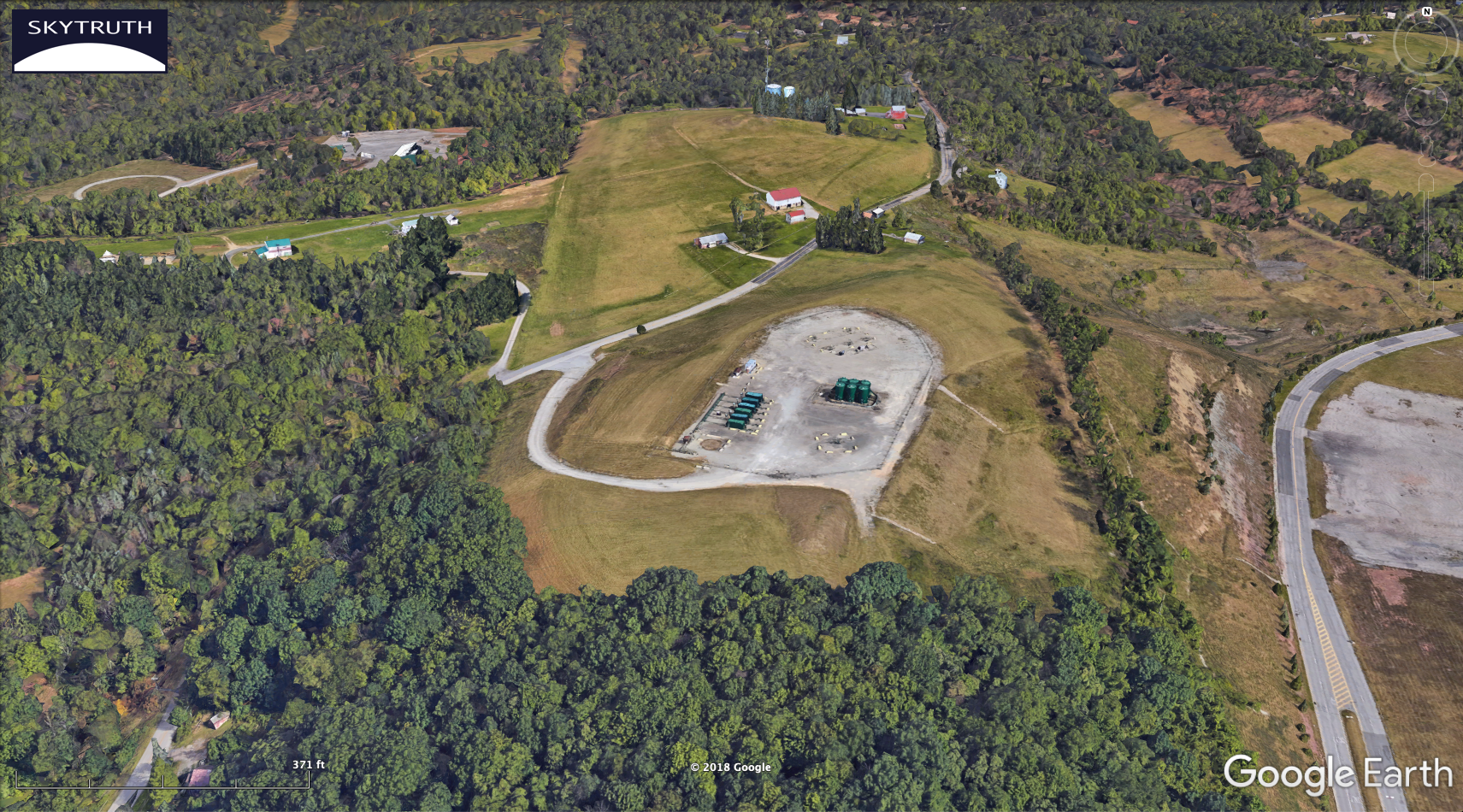 This 3D image (courtesy Google Earth) is from a farm immediately adjacent to the Pittsburgh Mills Mall in Tarentum. Notice that there are several houses that are extremely close to being within 500 feet towards the bottom left-hand of the scene; in fact, the house directly north of the drilling site is within 500 feet of the drilling site. This could be the landowner’s house, signifying that they have waived the minimum setback requirement for their home.

To see SkyTruth’s analysis of the effect that setback distances can potentially have on natural gas development in Allegheny County, please follow the link provided here.  And stay tuned for part two of this series, where we’ll look at fracking in Susquehanna and Bradford counties over the last decade.