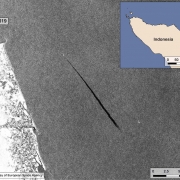 On February 15, 2019, a vessel that appeared to be releasing oily waste was captured by satellite almost 10 kilometers offshore Peureulak, a small town in Aceh Province, on the northern tip of the Indonesian island of Sumatra. Radar imagery from the European Space Agency’s Sentinel-1 satellite shows an 18-kilometer slick trailing a northbound ship, visible as a bright spot at the end of the dark slick.

The ship is traveling through the Strait of Malacca, a narrow strip of water between Sumatra and the Malay Peninsula. The Strait is one of the world’s busiest shipping lanes as it is both the shortest and most convenient path between the Indian and Pacific Oceans. Due to the Strait’s high density of marine traffic of all types, oil spills — accidental and intentional — are likely to occur. Figure 1 illustrates suspected bilge dumping, a typically intentional discharge of oily waste from ships to reduce ballast water or free up space in the cargo holds. Typically, bilge-dumps form distinctive linear slicks visible on satellite imagery.

While radar satellite images are very useful tools for detecting slicks, they are typically not detailed enough to allow identification of the responsible vessel. However, many vessels broadcast their identity and other information using the radio-frequency Automatic Identification System (AIS). AIS use is required for all large cargo vessels and tankers. By studying the AIS broadcasts in this area using exactEarth’s ShipView service, which collects the signals using satellites and ground-based receivers, SkyTruth analyst Bjorn Bergman determined the Indonesian cement carrier PERKASA (Figure 2) was at this location when the Sentinel-1 radar image was acquired. Formerly known as KOEI MARU NO 7, the vessel was built in 1981 by Ube Industries, Ltd., a Japanese chemical manufacturing company. Today, the ship is operated by PT Indobaruna Bulk Transport (IBT), an Indonesian shipping company based in Jakarta.

Figure 3 shows the PERKASA’s  AIS-derived track overlain on the Sentinel-1 image, revealing a very close match between the vessel’s path and the suspected bilge slick. The AIS signal immediately to the south of the vessel location on the image indicates it was traveling 11 knots (~20.4 km/h) at 11:17 UTC;  the signal immediately following at 12:10 UTC indicate the vessel was traveling 10.8 knots (~20.0 km/h). Using the location data encoded with these AIS signals, we calculated the likely position of PERKASA at the instant the image was acquired (11:43 UTC). The ship’s predicted location closely matches the vessel’s position in the Sentinel-1 image, and no other vessels broadcasting AIS were likely candidates for a match. This leads us to infer that PERKASA is the vessel seen apparently discharging oily bilge waste in the satellite image.

To the south, a chain of less-distinctive slicks along the coast are roughly aligned with PERKASA’s track (Figure 4). These slicks are broad and striated as opposed to the slender 18-kilometer long slick, which could be a result of wind and current blowing apart what had originally been a series of discharges from the vessel. The AIS transmissions from PERKASA are infrequent in this region (Figure 5), making us somewhat less confident that this vessel was also the source of these patchy slicks.

The operator of PERKASA, IBT, claims “we put high priority in safety by adhering to policies, practices, and procedures in our Safety Management System to ensure the safety of crews, staffs, cargoes, vessels, as well as environment.” In addition nearly all of IBT’s fleet is registered with classification societies. According to The International Association of Classification Societies (IACS), the purpose of a classification society is “to provide classification and statutory services and assistance to the maritime industry and regulatory bodies as regards maritime safety and pollution prevention.” IACS is a non-governmental organization composed of twelve classification societies.  PERKASA is registered with Biro Klasifikasi Indonesia (BKI) and Nippon Kaiji Kyokai (ClassNK), which is a member of IACS.

One of the certification services provided by ClassNK is the Verification for Clean Shipping Index (CSI). The objective of CSI is to verify the environmental performance of a vessel’s operations in five areas, including water and wastes. Ballast water, sewage/black water, garbage, sludge oils, and bilge water are covered under this category.

Bilge dumping — intentional or otherwise — would seem to violate the principles touted by the vessel operator, and call into question the effectiveness of the classification societies.

What can we learn from the longest oil spill in US history?