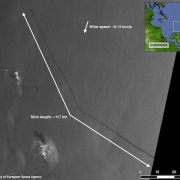 Near the northern tip of Indonesia’s Bangka Belitung Islands (located directly below the yellow box within the inset map of image 1), I spotted a slick that resembles clock hands pointing to the hours 4 and 11. Captured by radar satellite, Sentinel-1, on the evening of January 8, 2019 (22:40 GMT), the slick stretches at least 117 kilometers. Due to the slick’s narrowness and distinct sharp turn in track, it is likely a bilge dump. To the right, the slick trails beyond the edge of available imagery. Though we cannot see the responsible vessel on this image, the sharp linear impression of the slick indicates that it probably passed through the area within 24 hours of the scene’s capture.

Image 3 juxtaposes the slick and GAMSUNORO’s AIS signal. Traversing southeast, the ship’s first signal was recorded at 12:59 GMT. Close to 14:00 GMT, the vessel encountered the area with the slick. From this information, we know the tanker’s predicted track occurred approximately 8 ½ hours before the scene was captured. In addition, the vessel’s path imitates the shape of the slick. However, the ship’s track is slightly displaced to the northeast. It is possible that the slick may have drifted due to steady winds blowing from the NE (~6-13 knots) at least seven hours prior to the image’s capture. There appears to be a strong correlation in the temporal and spatial attributes of slick and ship, indicating that the GAMSUNORO is a likely source. To corroborate our findings, we followed the ship as it sailed southbound.

Initially, we anticipated the ship would journey to Jakarta; however, image 2 displays the vessel’s latest position (January 14, 2019 at 10:55 GMT) anchored about 6 miles offshore near the town of Indramayu. With an updated version of the vessel’s track, we may be able to find evidence of a continued slick either on their way south or at their current anchorage. Whether or not we are able to positively ID the perpetrator, this is one of many examples displaying the temporal challenges of using satellite imagery to capture not just illegal activity but any short-lived phenomena.