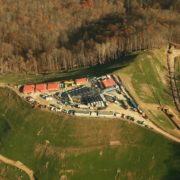 Hydraulic fracturing — fracking — has unlocked natural gas resources from formations like the Utica Shale and Marcellus Shale, resulting in an explosion of gas-drilling activity across the Mid-Atlantic states. One of the states sitting above this hot commodity is Pennsylvania; the state boasts a massive reserve of nearly 89.5 trillion cubic feet of dry natural gas, according to the US Energy Information Administration.  In the thick of it all, Allegheny County, in the southwestern portion of the state, is one of the few counties where drilling activity has been relatively light. The county’s main defense against well drilling has been zoning regulations which require a “setback” between unconventional natural gas drilling sites and “occupied buildings.”  At present, the minimum distance required between a well pad and a building is 500 feet (unless consent has been received by the building’s owner). However, this distance may not adequately protect human health, especially in communities surrounded by drilling. Municipal officials might want to consider alternative setbacks, based on the latest scientific research on the impacts of drilling on the health of nearby residents.  This analysis evaluates a range of setback scenarios, and illustrates the likely drilling density and distribution of drilling sites across the county for each scenario.

To better understand the potential impact of drilling in Allegheny County, I analyzed several different “drill out” scenarios (Figure 1).  I developed our first Google Earth Engine app to give users a glimpse of how different setback distances and different well spacing intervals might impact the number of homes at risk from drilling impacts in the future.  Check out the analysis here.

To begin this analysis, I downloaded building footprint data for Allegheny County from the Pennsylvania Geospatial Data Clearinghouse.  Next, I downloaded shapefiles representing the centerlines of major rivers passing through the county, other hydrological features in Allegheny County, and county-owned roads from the Allegheny County GIS Open Data Portal. I also downloaded a TIGER shapefile representing Allegheny County’s Major Highways as of 2014, courtesy of the US Census Bureau. Setback distances of 500 feet, 1,000 feet, 1,500 feet, and 2,500 feet were used to buffer the center points of “occupied buildings” in the county. I selected the minimum and maximum setback distances based upon the current Pennsylvania setback laws (500 ft.) and a recently proposed and defeated setback distance from Colorado (2,500 ft.). The latter regulation, if passed, would have been the most restrictive regulation on fracking of any state.  The 1,000 and 1,500 foot setbacks are meant to serve as intervals between these two demonstrated extremes of zoning regulation. I also created buffers around rivers and streams as well as roads. I applied a 300 foot buffer to the centerlines of all rivers and streams in the county (based upon the current regulations). I also applied a 328 foot buffer to all major highways and a 40 foot buffer to all county roads. These three buffer zones remained constant throughout the project.

After applying these buffer distances to rivers, roads, and buildings, I calculated how many acres of Allegheny County were potentially open to drilling.  Using the currently required distance of 500 feet, there are approximately 53,000 acres potentially available for drilling in Allegheny County, PA (See Figure 2).

Using the setback distances that we identified (e.g., 500 feet, 1,000 feet, 1,500 feet, 2,500 feet), I wanted to visualize what different potential “drill out” scenarios might look like.  To do that, I had to decide how much space to leave between potential well sites. I chose to space out the potential drilling sites according to three different intervals: 40 acres per well, 80 acres per well, and 640 acres per well.  Calculating different setback distances and different spacing intervals allowed me to investigate the range of possible “drill out” in Allegheny County.  I calculated the number of new drilling sites that each “drill out” scenario could potentially support. I’ve summarized the results below:

So, for example, a setback distance of 500 feet coupled with a spacing between well pads of 40 acres would allow for 928 new potential drilling locations.  Taking into consideration the approximate 3-5 acre area required for the development of a well pad, this suggests that 2,700-4,600 acres of land in Allegheny County could be subjected to surface well development.

For each “drill out” scenario, I mapped the number of potentially supported wells, and I put a two-mile buffer around each point to simulate the potential zone of adverse health impacts (See Figure 3).  I used the buffered points to calculate the number of “occupied structures” that would be at risk of exposure if a drilling site was built. The number of occupied structures at risk when considering each of the different scenarios is summarized in the table below:

Setback distances can be an important tool for municipal governments looking to reign in drilling to protect the health, safety, and quality of life of local residents.  My analysis demonstrates how setback distances can help protect the public from the adverse impacts of oil and gas drilling in Allegheny County, Pennsylvania. Please be sure to check out the app here.

From Trial to Triumph: Learning to Code at SkyTruth
Scroll to top