In October 2018, The Washington Post  ran a story describing the ongoing, 14-year-long leak of crude oil from hurricane-damaged wells at the former location of an oil platform in the Gulf of Mexico operated by a company called Taylor Energy.  The article stated that — based on the latest scientific estimates of the leak rate — the Taylor spill was about to surpass BP’s disastrous 2010 blowout in the Gulf, becoming the world’s worst oil spill. News outlets around the world pounced on this headline, shining a global spotlight on this egregious chronic leak. Within weeks, the US Coast Guard announced they had finally ordered Taylor Energy to fix the leak or face a daily $40,000 fine. The team at SkyTruth was thrilled when we heard the news: when Taylor finally fixes the leak, this will be a great win for the environment in the Gulf and send a strong message to the offshore oil industry that we won’t let them walk away from their messes. And, this is the vindication of eight years of persistent, dogged work by SkyTruth and our partners. 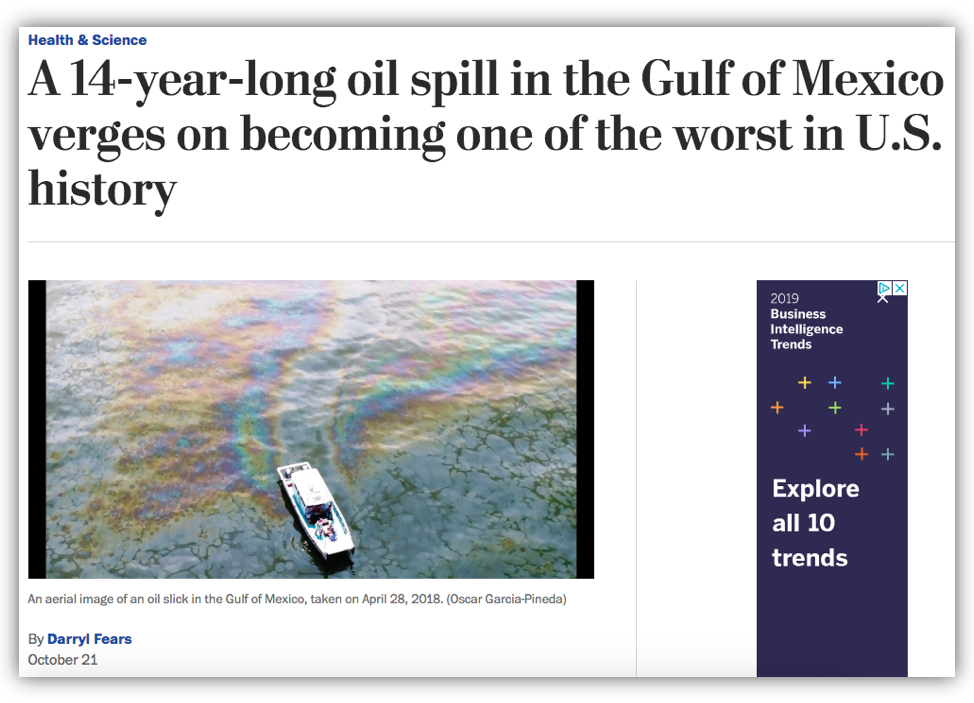 How did we achieve this significant victory for the environment and the people of the Gulf Coast?  We….

And finally, an hour-long interview with Washington Post reporter Darryl Fears resulted in the article that triggered Coast Guard action. Since then, we have continued to monitor the Taylor Energy leak to ensure that effective action is taken. And we’ll let the world know what we see.

This is what it takes to make positive change happen for the environment. We’d like to thank the foundations and individuals who have donated to SkyTruth, making it possible for us to dedicate the time and resources needed to sustain this watchdog effort over so many years.  We couldn’t have done it without you.

Please help us keep it going.  Donate to SkyTruth today!

No NRC Reports since Nov. 18 [UPDATED]

Tracking the Chinese Squid Fleet in the South Pacific – Part 2: A City...
Scroll to top