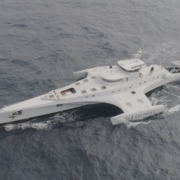 When monitoring vessel activity on the vast scale of the world’s oceans at SkyTruth we know we’re almost always dealing with incomplete information. For example, only some vessels transmit their locations at sea via the Automatic Identification System (AIS), while others may only come up in a particular government’s private Vessel Monitoring System (VMS) or we may just see them as blips on a radar screen. So I was excited to hear that I was invited to accompany a vessel actually going out to investigate one of the fleets we have been monitoring with AIS and night imagery. The ship I would board is the M/V Brigitte Bardot, a 35 meter former racing vessel now run by Sea Shepherd, an international non-profit dedicated to taking direct action for marine conservation. In 2016 Sea Shepherd was able to track down some unusual vessel activity that we spotted in the Indian Ocean with spectacular results.  This time we would be tracking a much larger fleet fishing for squid in international waters 700 miles west of the Galapagos.

Squid doesn’t come to mind when you consider the targets of the world’s largest fishing fleets. However, over the past few years the magnitude and global scale of squid fishing fleets have become apparent. Due to powerful fishing lights used to attract squid to the surface these fleets appear on NASA’s night imagery like cities floating hundreds of miles offshore. Recent analysis of vessel movements shows that they are interconnected with hundreds of predominantly Chinese flagged vessels moving between fleets along the Peruvian Exclusive Economic Zone (EEZ) boundary, the South Atlantic, the northwest Pacific, and even the northern Arabian Sea.

We’ve been monitoring the squid fleet fishing at the Peruvian EEZ boundary for some time. We noticed a handful of vessels in the fleet broadcasting false AIS locations. Then in 2017, we were puzzled when the entire fleet suddenly picked up and relocated 3,000 miles to the northwest of the EEZ boundary, to a remote area west of the Galapagos. So as I boarded Sea Shepherd’s Brigitte Bardot, I was really curious to find out the real size of the fleet and why so many vessels appeared concentrated at this remote location.

Vessel detections with VIIRS night imagery (left) and AIS fishing effort (right) for the week of the Brigitte Bardot’s trip to investigate the squid fleet. Use the slider at the center of the image to switch between VIIRS and AIS detected vessel activity in the area. Full screen image here. Global Fishing Watch

On September 12th, we set off from Panama City with some of us suffering from the rough seas as we steamed southwest towards the Galapagos. I was able to meet the very enthusiastic crew on the Brigitte Bardot, including a professional photographer, a drone pilot, and a fantastic vegan cook. We were also fortunate to be accompanied by Eloy Aroni, a Peruvian researcher who was just completing his thesis on tracking the squid fleet with nighttime satellite imagery from NASA’s Visible Infrared Imaging Radiometer Suite (VIIRS). After three days, we crossed into the Southern Hemisphere with the ship’s engineer taking a celebratory swim across the Equator. Later that afternoon, we sighted the desolate coast of San Cristobal Island, and after rounding the sheer rock cliffs of Sleeping Lion Rock, we entered the island’s main port. 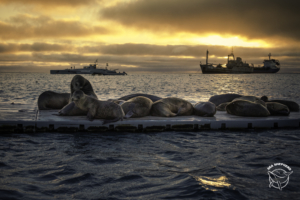 Sea Lions on the docks of San Cristobal with the Brigitte Bardot in the distance.
Photo by Simon Ager/ Sea Shepherd

We were held up in San Cristobal for a few days dealing with customs and inspections. This delay gave me a chance a to see bit of the island’s interior and review the latest information I had on the fleet we were tracking. Our data came from three sources, vessel AIS broadcasts, VIIRS night imagery, and interestingly two synthetic aperture radar (SAR) images of the fleet provided by Kongsberg Satellite Services (KSAT) as we were heading out. While SAR imagery is acquired routinely by the European Space Agency’s Sentinel-1 system over land and coastal areas it’s unusual to have imagery over the open ocean. So we were lucky to have access to a few shots of the fleet provided by KSAT from Canada’s Radarsat-2 satellite. This allowed us to make a comparison to our usual tracking sources for the fleet, AIS and VIIRS night imagery. 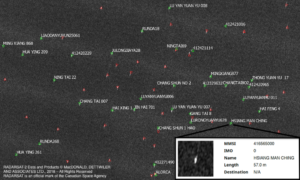 Synthetic aperture radar covering a portion of the squid fleet provided by Kongsberg Satellite Services (KSAT). Those vessel detections outlined in green were found by KSAT to align closely with AIS broadcasts. Detections outlined in red could not be identified confidently with AIS. The inset on the lower right shows at larger scale the detection of the squid jigger Hsiang Man Ching. The large number of unidentified (red) detections was likely due to limited satellite AIS reception and does not necessarily indicate that the vessels were not broadcasting AIS.

AIS gives vessel locations and (usually) vessel identities. VIIRS gives us an approximate count of the number of vessels with their fishing lights lit up on a particular night. However, with no law requiring AIS use and the fact that VIIRS imagery is relatively low resolution (and still untested against this particular fleet), we suspected that these data sources might be giving us an incomplete picture of the total fleet activity. For these reasons, it was useful to make a comparison with the two SAR images since they should pick up every vessel present in the area, provided they are metal and above a certain size. Ultimately, comparison between the SAR vessel detections and total AIS broadcasts showed that despite a number of SAR vessel detections that could not be identified with AIS (outlined in red in the figure from KSAT above) the total number vessels detected by both systems was approximately the same, indicating high AIS use for the fleet, but also with a few clusters of radar detected vessels not associated with AIS.

After refueling on Baltra, a barren island with a former US military base, and installing a new satellite communications system, we set off on September 19th. In the evening we rounded the north cape of Santa Isabela Island and headed west into a vast stretch of the open Pacific. Ahead of us the nearest land was 3,000 nautical miles away in the Marquesas Islands of Polynesia. We would be venturing across some of the most remote surface of our planet on a voyage that would launch Operation Mamacocha, Sea Shepherd’s newest campaign fittingly named after the Incan sea goddess. 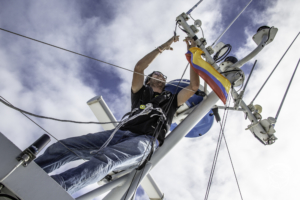 Captain Chris fixes the antenna of the Brigitte Bardot before departing the Galapagos. Photo by Simon Ager/ Sea Shepherd

New Milestones for Fisheries Transparency in Indonesia and Peru
Scroll to top
SkyTruth and/or its third party tools use cookies to monitor traffic in the aggregate on our websites and applications and to improve user experience. If you continue browsing, we'll assume you agree to the use of cookies. You can change your cookie settings at any time in your browser settings. Find out more in our privacy policy.