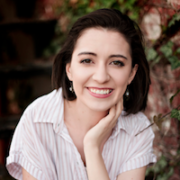 As global energy consumption continues to grow, Trinidad and Tobago — a small, Caribbean nation rich in oil and gas resources — has become one of the top exporters of liquified natural gas (LNG) in the world.  But the benefits to the economy of Trinidad and Tobago have come with a cost: chronic leaks and spills from aging oil and gas infrastructure on and offshore.

In early July, an abandoned oil well off of the west coast of Trinidad ruptured, sending dangerous hydrocarbons spewing into the ocean [archived link on Wayback Machine].  Trinidad and Tobago’s state-owned oil company Petrotrin stepped in to help address the rupture, but six days after the orphaned well erupted, the Ministry of Energy was still trying to determine which private company was responsible.

Insufficient documentation and incomplete record-keeping makes response efforts more difficult.  Gary Aboud, Corporate Secretary of Trinidad and Tobago’s Fishermen and Friends of the Sea (FFOS), summed up the the deeper issue in Trinidad concisely: “Who is the responsible party? Nothing has been done all week…There are literally hundreds of decades-old, capped, orphaned or abandoned wells which may not have been properly decommissioned, and are corroding.” 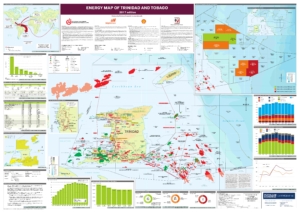 Better documentation about ownership and better geospatial data showing oil and gas fields, pipelines, and abandoned wells would be a step in the right direction.  Some of this information is available but, as the map above shows, much of it is in a form that is very difficult to use. This energy map is pretty ‘busy’ — the various oil fields, gas fields, and pipelines depicted together make it difficult to use, especially in a crisis scenario like responding to an oil spill.

Officials need a comprehensive geospatial data set — filled with attributes like ownership or responsible party — that they can easily examine, especially during crises like this one.  One of my tasks as an intern at SkyTruth has been to pick apart the existing information (including the map above) and provide it as a robust geospatial data set that’s easy for the public to use. 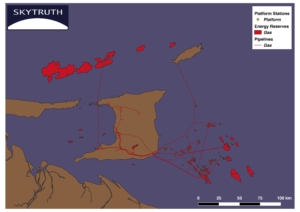 Gas fields and gas pipelines in Trinidad and Tobago, digitized from the map above.

I’ve digitized all of the oil and gas fields, pipelines, and existing platforms around Trinidad and Tobago, and I’m constantly adding in new fields and data that I’m collecting about these features. 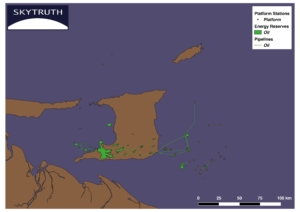 Oil fields and oil pipelines in Trinidad and Tobago, digitized from the map above.

I’m using these new data sets — combined with Sentinel 1 radar satellite imagery — to help monitor oil leaks and spills around Trinidad and Tobago like the one described above.  Having better geospatial data will improve not only how companies handle clean-ups, but will also provide local fisherfolk with more insight into leaks and spills from oil infrastructure as they happen.