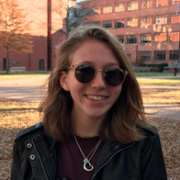 Practice does not guarantee perfection but it is a diligent educator. During my first week of orientation at SkyTruth, the other interns and I filtered through Sentinel 1 radar satellite imagery on the European Space Agency’s (ESA) online portal, compressed large .tiff image files using the command-line, and constructed final, publishable visuals in QGIS – a free, open source geographic information system (GIS), enabling users to create, view, edit, and analyze geospatial data. Essentially, we learned the fundamentals of finding, processing, and analyzing imagery.

Subsequent to grasping the basics, I worked on catching my first ocean offender by clicking through images, zooming in and out of rasters, and adjusting min and max values. Eventually, I spotted several shadowy slithers. Possible identification: oil leak. 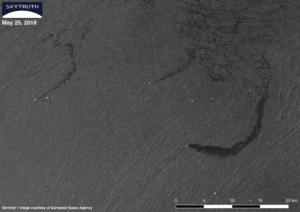 The first image I discovered at SkyTruth.

Before hopscotching to conclusions, I checked in with mentor, Dr. Ry Covington (Doctorate of Philosophy; he’s not the medical type but he knows a thing about bodies – bodies of water, that is). Without hesitation, Ry confirmed my sighting as plausible. Three likely slicks from three unidentified sources. Mission success, phase two initiated: annotate.

When annotating an image, there are certain guidelines to follow. Most of the metadata – basic information needed to read a visual such as image credit/source, author, scale-bar, and date – is there. However, I did not include any boxed nouns or pointy things denoting the white zit-like points, or running, dark mascara streaks. Reflecting, I should have marked up this version more; I should have labeled the several pimples as unidentified sources, and measured the length of the eyelash-lacquer lines, ticketing them as slicks. Instead, I let the caption clamor over the image.

My first caption went something like this: “This image displays three leaks from several unidentified sources, off the coast of Guangzhou Province, China (near Hong Kong).”

That was all I got. New to the practice in general and unfamiliar with that latitude, I didn’t have much to say. So to boost productivity, I harvested a separate, bluer pair of eyes. My advisor with three first names, Christian James Thomas, looked over my caption. He was particularly picky with diction. One word, to be precise: leaks. Backspacing five times, Christian typed ‘slick’. Slick? Like ‘smooth’ or ‘glossy’? Or maybe like Eric Slick, the drummer of my favorite band, Dr. Dog? I wish, but certainly not.

‘Slick’ has various definitions, but to the SkyTruth team, slick typically describes flat water. Smooth surfaces on satellite radar imagery could signify oil, algae, lack of wind, or the like. What we are interested in is the accidental or purposeful release of oil or oily waste that may be a result of drilling, disposal, or disaster. Leak or spill is too specific, too assuming. I learned why this was after confusing slicks with a number of other ocean junk. When examining satellite evidence, slicks are often muddled by air and ocean current due to lag time between spill and image capture – this phenomenon also contributes to why some slicks exist without suspect in sight. Other times, slicks can be confused with false positives from weather events, natural disasters, coastal features, natural seeps, and other anomalies. 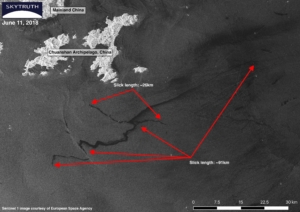 This figure displays two likely slicks from intersecting bilge dumps off the coast of China. Due to their kinky shapes, these slicks are likely several days old; this image also shows the influence of time and natural forces on slick appearance.

Although I discovered how to be more transparent with terminology and make better imagery-based speculations, I did not know enough about slicks themselves. Oil naturally exists in the earth, and we harvest it to power our consumptive, energetic lifestyles. Sometimes, the oil itself leaks. In other other cases, wastewater produced during offshore drilling processes is released by us. This produced water is known as brine. Brine contains inorganic substances, toxic matter, and variably sized oil particles that must be properly disposed of or treated before release; it can be treated on platform and discharged into open water, transported to an offsite facility treatment or disposal facility, or put into beneficial reuse – for irrigation, recycled flowback fluid for other drilling operations, or as a substance for ice control (“Produced Water 101”, 2017).

Unlike shoplifting or arson, oil slicks are not always a result of unlawfulness. Some slicks are consequences of legal dumping – legality depending on individual cases in regard to international and country approvals. Accidental spills and leaks also occur and must be cleaned up. However, not all slicks are legally permitted or accidental and concern arises when oil slicks appear without record. Bilge dumping is one indicator of purposeful, often illegal, offshore pollution. To relieve ship weight and space, ships release oily waste from their engine and fuel systems, flushing residual material out of their cargo holds. This is highly illegal, as noted by a case in 2016, when Caribbean Princess, a luxury cruise ship under Princess Cruises, was fined $40 million for illegally discharging thousands of gallons of bilge. Senior intern, Daniel Nicholls, spotted a similar incident with another Princess Cruises ship in late January, indicating an ongoing dilemma. 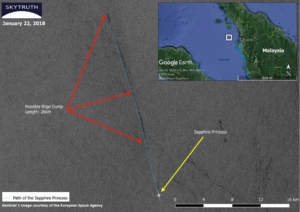 Now, I understand slicks not just as mascara tears or eyeliner blunders across a wrinkled ocean display; but as oily remnants with purpose and disposition. This comprehension allows me to more appropriately identify and interpret oil slicks in marine environments. As valuable as this was process and realization was, I registered that the beluga colored specks, aka the potential sources of the slicks, were still unidentified. Probably boats….

Who’s to blame? The murky dilemma of oil spill accountability

Video Clips of John at CBUC
Scroll to top