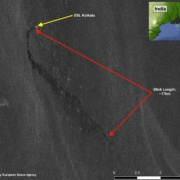 Followers of our work will recall the merchant vessel SSL Kolkata that was being towed by the Indian Navy after catching fire on June 13th off the Sundarbans in the Bay of Bengal.  The Indian Navy had to abandon the ship after a series of explosions and it has been stuck in shallow water ever since. There have been concerns that the 400 tonnes of heavy fuel oil might start leaking as the ship is listing and cracks are developing. The Sundarbans are the world’s largest collection of mangrove forests and a Unesco World Heritage site (https://whc.unesco.org/en/list/452), and a major oil spill here could be devastating. We see indications in this Sentinel 1 radar satellite image from July 17 that this is a legitimate concern: there appears to be a 17km slick coming from the vessel, being pushed by the strong currents from the Ganges Delta. 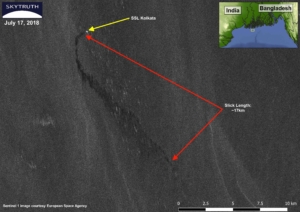 Sentinel 1 imagery showing a slick visible with Synthetic Aperture Radar that appears to be emanating from the stricken vessel on July 17.

Considering the volume of oil onboard, the slick on July 17 is far smaller than what we would expect if there were a serious leak. This Sentinel 2 multispectral image from the 19th has also captured the slick. Though it doesn’t give us a complete image of the slick as a radar image would (due to interference from the clouds and cloud shadows), we do get an idea of how the slick is spreading not just south, but also north toward the Delta. 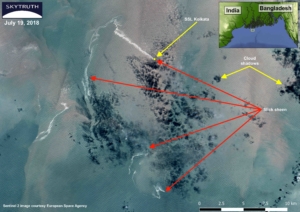 Attempts have been made to salvage the ship but were abandoned after cracks developed and the ship started listing. Now that the fuel tank is underwater, they will need to suck the oil out carefully using a method known as “hot tapping.” Although poor weather has delayed these plans, we have observed one tugboat, the Lewek Harrier, visiting the site as recently as the 19th according to its Automatic Identification System (AIS) signal. Though we couldn’t definitively identify the vessel visible in this image at the time it was collected, the Lewek Harrier was the only vessel that was broadcasting AIS in the area on that day. The MCS Elly II has also been operating in the area though we haven’t seen it in any images. 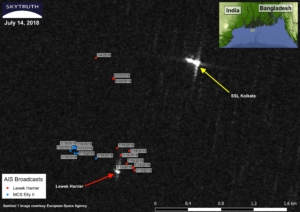 This vigilant tug, the Lewek Harrier, has been a regular visitor.

We hope this means an end to this leak and that the extent of the spill will be limited. We will continue to watch this area closely as there is still a real threat to the nearby Sundarbans.

You can find more info on the cleanup here.

You can find more info from when the containers began slipping off the ship here.