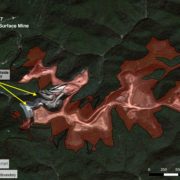 We were recently reviewing imagery of mine sites which experienced growth in 2017. We overlaid the mine permit boundaries that show where the government has legally granted companies permission to mine. We used our Landsat-based surface mining data to identify a set of candidate sites to examine more closely with higher-resolution Planet imagery through Planet’s Ambassadors Program. While looking at these sites, we noticed mining activity that seems to be occurring outside of permitted areas.

The Taywood West Mine as it appeared on a high-resolution Planetscope satellite image in July 2017. The mining permit boundary is shown in red; mining-disturbed land, based on SkyTruth’s analysis of lower-resolution Landsat 8 satellite imagery, is shown in orange and closely matches what we are able to see in this Planet image.  Apparent mining-related activity outside the permit area is highlighted in yellow.

The mine site continued to expand after July; the image below shows the extent of mining on October 19. More land outside the permit boundary appears to have been cleared since July 30. 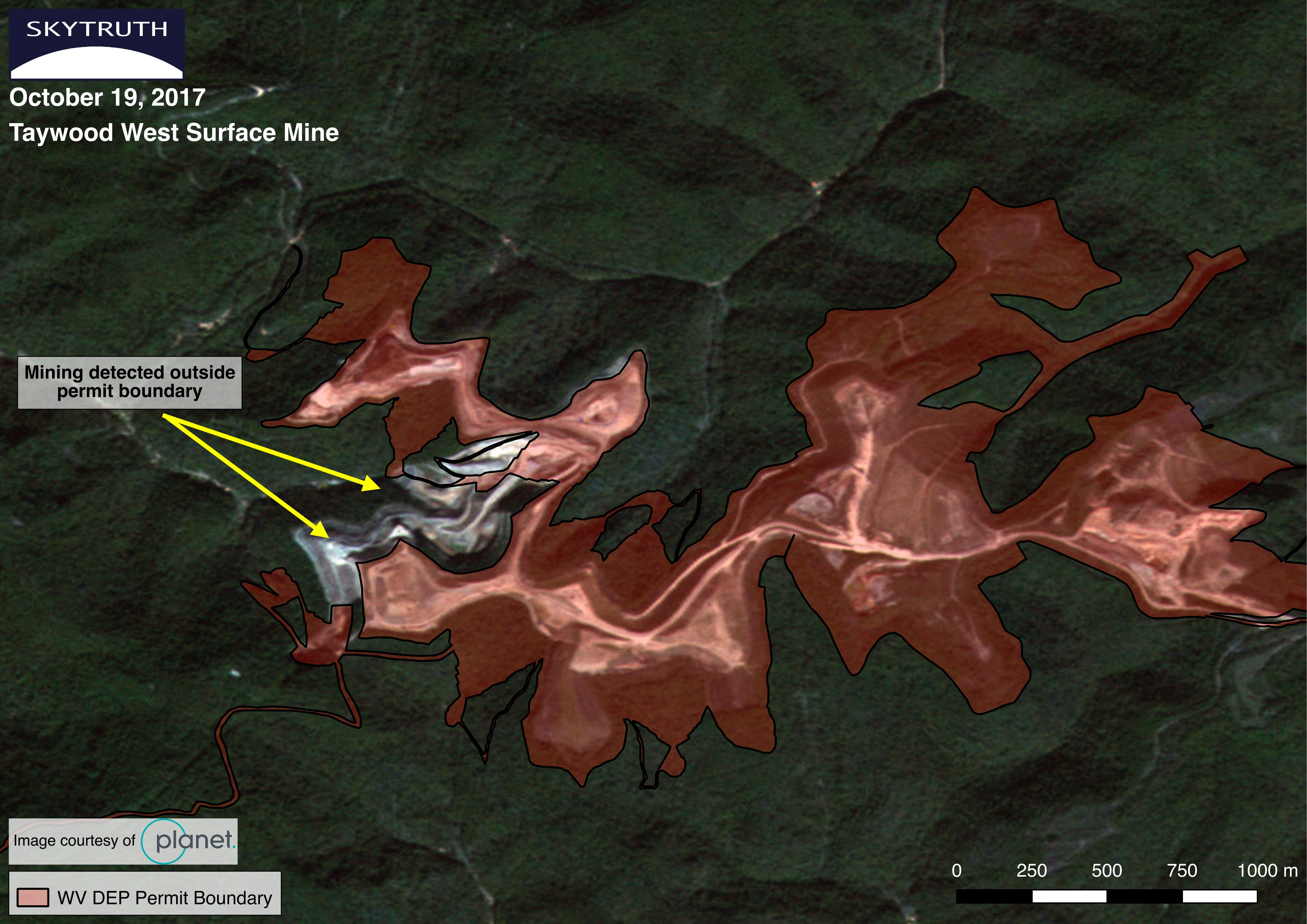 The Taywood West Surface Mine is located in Mingo County, WV approximately 12 kilometers northeast of the town of Kermit and 76 kilometers southwest of the state capitol in Charleston.

The Taywood West Surface Mine (pictured above) caught our attention when we noticed evidence of mining activity, which fell outside the mine’s permit boundary. In the image, areas overlain in red show the extent of the mining permit; the bright areas of bare rock and soil on the image show where mining activity (cut and fill) activity has apparently occurred as of the date of the image (October 2017). Fifty-two acres of mining-disturbed land lie outside of the permitted area. According to permit data downloaded from the West Virginia Department of Environmental Protection (WVDEP), the permit for the Taywood West mine was issued to Southeastern Land, LLC in August 2005 and will expire in August 2020.

A 2004 study conducted in West Virginia showed a surprisingly high degree of mismatch between permit boundaries and actual mining, but we thought the situation had improved since then. Now we are not so sure, and we’re wondering how widespread this problem is. Accurate assessment of the location and amount of existing mine-damaged land is critical for forecasting the cumulative downstream impacts of mining in deciding whether to approve permit applications for new mining. And it’s critical for planning and executing the extensive reclamation work this region needs to recover from the negative impacts of coal mining. Whose job is it to make sure miners stay within the boundaries of their mining permit?

An Update on the Taywood West Surface Mine
Scroll to top